In honour of its principal character, Shelly’Bombshell’ Harrison, Ion Fury was initially known as Ion Maiden – but that changed soon after the band Iron Maiden threatened legal actions. But the aging ring needn’t have bothered — this throwback first-person shooter isn’t anything like the classic British metal forged in the’70s and’80s. Ion Fury is distinctively nu-metal; rooted at the’90s, hard as Nine Inch Nails and probably to create even the most skilled player feel like a bit of a Limp Bizkit. 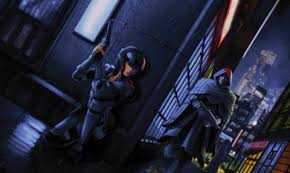 Ion Fury is a singleplayer-only first-person shot which feels indicative of pre-turn-of-the-century shooters like Duke Nukem 3D and Blood, with good reason: it’s been built on what is almost the exact same game engine, called Build. It’s a colourful clash of crude 3D environments with enemies and effects made of chunky 2D-sprites. Its pulsating MIDI-based soundtrack and crispy shotgun effects seem like they’re being spat out by a Sound Blaster 16, and its main villain is voiced by none other than Jon St. Jon, AKA the voice of Duke Nukem himself. Ion Fury doesn’t feel as a mere homage to the era; it is so exceedingly authentic that it’s like it slipped off a game store shelf in 1996, tumbled through a wormhole and landed in my Steam lineup in 2019. Appropriately, it’s also incredibly hard. Ion Fury features few of those modern conveniences that have coddled shooter lovers over the last few decades, and indeed, the most notable traces of contemporary gaming style philosophy available here is the choice to run Ion Fury at resolutions greater than 320×240 and the capacity to turn on automatic checkpoint saves. Otherwise there is no recharging wellbeing, no cover program, and no onscreen tutorial tips. Ion Fury is shooting without a safety net; an unwaveringly stressed 16-hour killing spree that demands to be circle-strafed through systematically with one finger over the cause and another hovering through the quick-save function key. 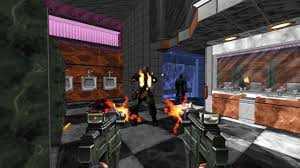 It might very easily have become a slog, were it not for Ion Fury’s superb arsenal of dual-purpose death-dealers. More or less every single weapon has a useful alternate-fire style; the revolver can paint numerous objects and deliver a burst of homing bullets using a fanning of the hammer, which I found invaluable for taking the more nimble enemy kinds such as the flying drones and headcrab-like spiders. The incendiary round-spitting sub-machine gun can be split between unmarried or dual-wielding for a faster rate of fire, and the shotgun can transform into a room-clearing grenade launcher.

Each weapon is fun to use in its own way, and you’re gonna want all of them because ammunition is scarce and enemies are plentiful, meaning the pressure is on to make every shot count. Additionally, certain enemy types may punish you for your inaccuracy; pump a couple of rounds to the mind of the acid-spitting centipede enemy and its segmented body will self-destruct in sequence, but if you instead aim for its own body it will split into individual enemies which can attack you from all angles.

Individually, the enemies in Ion Fury are tough enough, however, the problem really spikes when they strike en masse during the boss battles that bookend each collection of chapters. The challenge presented by overpowered boss characters like the ED-209 motivated much is intense, but it is made nearly unbearable when it’s combined with the overwhelming numbers of minions that swarm around each boss combat arena. No matter how much you really zig and zag and leap and twirl, the enemies are almost always accurate enough to nail you with health-sapping shots, often fired out of far-flung corners or, most infuriatingly, from regions where enemies are apparently from sight. There’s scarcely enough assurance to steady to get a manual save, and you are not given much choice other than to try and try again – falling down the difficulty level to generate an easier go of it sadly is not an alternative. 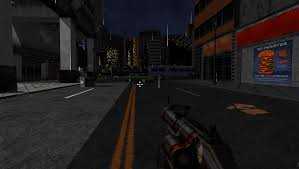 I toughed it out through all of these ball-breaking boss encounters on the game’s second hardest difficulty mode (Ultra Viscera), but Ion Fury’s final fight proved to be too much for me to handle. To be able to roll credits you need to survive against seemingly endless, spawning versions of nearly every enemy kind you have faced so far, attacking in overwhelming numbers, while playing a sadistic sport of jump rope using a swirling laser beam that threatens your kneecaps every few seconds and grinding away at the boss’ extended wellness bar, even while he remains shielded from the bulk of your attacks with a giant dome. After a number of hours fighting to make any substantial headway, I gave up and was forced to activate infinite health with a cheat code in order to finally beat him. It should have felt just like a fairly unfulfilling way to finish my period with Ion Fury, but to be honest the use of a cheat code to conquer a shooter inspired by the’90s couldn’t have felt more appropriate. After all, when was the last time you played a sport which even had cheat codes?

Eye-watering difficulty spikes apart, Ion Fury’s deliberately old-school design also becomes a small burden as far as navigation is concerned as a result of the complete absence of goal markers. Often over the course of the campaign I’d hit a non resolution-textured wall in my progression, with no glowing chevron hovering in the horizon or chatty AI companion to direct me where to proceed. At these points I found myself retracing my steps the length of an entire level and again attempting in vain to start several locked doors, eventually discovering that the only way forward was by shooting a air vent hidden away at a closed toilet stall (and just after shooting other, non-destructible air vents, doors and sewer grates from the area ). I don’t have any issues with the shortage of handholding, but I would have chosen if moving beyond these roadblocks required more brain power instead of brute force as well as guesswork.

To be fair, Ion Fury at least requires a great deal of the banality from this backtracking by stuffing its degrees with hidden paths and secret chambers, so exploring every inch of every level infrequently goes unrewarded. Destructible walls can be demolished to show chambers packed with much-needed power-ups, and medkits and armour shards are usually put on hard-to-reach ledges like pies left to cool on window sills, only accessible by yanking off a pinpoint string of crouch-jumps.

Nevertheless, Ion Fury’s level design as a whole is finally a bit too true to conference. The campaign takes you from shopping malls to subways to subterranean lairs and finally sub-subterranean lairs, with every zone adhering quite rigidly to the timeless Red/Blue/Yellow key structure and only divided by the strange train amount or horde-based elevator platform journey. I appreciate that developer Voidpoint set out to craft a first-person shot on par with the likes of Duke Nukem 3D and Shadow Warrior, and in many respects it has triumphed, but I can’t help but wonder how Ion Fury could have turned out was an attempt to supersede or subvert the shooters of the’90s era rather than merely measure up to them.