Destiny 2: Shadowkeep gets a launch trailer ahead of its October 1 release

The slight delay to Destiny 2: Shadowkeep has largely been a blessing for looter shooter fans. In addition to the assurance that we’ll get a fully polished expansion from Bungie, it’s also meant they’ve been able to play a meaningful chunk of Borderlands 3. Or, in my case, spend an extra two weeks lovelessly farming enhancement cores. In any case, the wait is almost over, and in advance of Shadowkeep’s October release date, we now have the obligatory launch trailer.

This close to the big day, it’s largely the expected fare on show, with nods to the revamped armor system, the new raid, and dungeon, plus the addition of close-quarter finishing moves. For the more eagle-eyed devotees—ie, me—there’s also the opportunity to freeze-frame and gawk at each new weapon model. My spotter’s guide: keep an eye out for the Hive-themed shotgun at 0’53”, what I think is the new exotic machinegun called Xenophage at 1’04”, a sweet-looking auto rifle at 1’17”, and another exotic, this time the sniper/pistol hybrid, at 1’25”. You can also spot the new heavy bow in there too, but I’m not going to get baited into using bows. 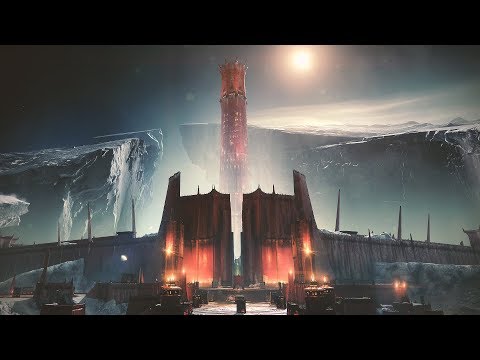 For the more fashion-conscious among you, check out the Armor 2.0 montage around the 1’12” mark. PvP gods will be delighted to note that old Trials armor is featured, perhaps hinting that that set will become an unlocked universal ornament, presumably only for those who previously earned it—ie not me.

The whole shooting match is narrated by Eris Morn, who provides the narrative drive for the expansion’s journey to the moon, where she’s discovered a buried secret that threatens to… well, you get the idea. Eris invites us to “be the thing that goes bump in the night.” Somewhat dissonantly, her gloom is soundtracked by the kind of upbeat sports rock (it’s E-Pro by Beck) that I more associate with the Activision era of Destiny (who can forget the disaster that was the DrCrispy93 trailer).

Destiny 2: Shadowkeep will launch alongside New Light, the free-to-play version of the game, on October 1. The expansion’s new raid, Garden of Salvation, goes live on Saturday 5 October, which will give me four days to grind up to 900+ power. Just as well my inlaws aren’t in town to visit that week, riiiiiiiiight?

Warzone servers not working? Why Call of Duty servers can be offline today