Fishing is the worst part of Stardew Valley.

That’s OK, because Stardew Valley is an extremely good game. On the positive — or maybe negative — side, it has an addictive 12-minute day/night cycle that regularly tricks me into playing for hours longer than I mean to. It has perfect sound effects, the music is soothing, and the storylines are touching. Being the worst part of a nearly perfect game isn’t a bad thing to be.

But, still. The fishing.

I recently bought Stardew Valley for the Nintendo Switch, after first playing on PlayStation 4. I don’t like playing as myself in games, but that’s not a problem, because I have a foolproof response to character customization. You might have heard of my preferred avatar.

His name is Ernest Hemingway, and he taught me how to fish.

Here are the reasons that Ernest Hemingway is the ideal video game avatar:

Either way, Ernest Hemingway’s brand is strong, simple, and iconic. And there is nothing easier to replicate in a video game than a brown-haired white man with facial hair.

And yet, the Hemingway model remains flexible. Give him a beret, and that’s young Hemingway in Paris! A sailor outfit? He did love the sea! Find me a video game that does not let you customize a decent facsimile of Ernest Hemingway, and I will give you, probably, nothing in return. Don’t @ me.

Ernest Hemingway is a complex person who has been reduced to a set of stereotypes, and that makes him perfect for a video game.

If I asked you to role-play Ernest Hemingway, I bet you would know how to act. You’d role-play kind of an asshole, a brash genius, a sportsman, a man’s man. Granted, I play a more nuanced version of Hemingway than what I’ve described here, because I know him better and love him more than anyone else does. That’s my privilege.

Here is a Venn diagram I made of Ernest Hemingway’s interests and common RPG activities.

Ernest and I go gaming

The first time I created the likeness of Ernest Hemingway was when I played Dream Daddy. It was 2017, I was starting to seriously engage with loving Ernest Hemingway, and I needed to make an avatar that wasn’t, ya know, me.

There was something delicious and subversive about making Hemingway a good father, and leaning into the queerness that is apparent in his writing. There’s also a side character in this game who is named Ernest Hemingway — an amazing coincidence.

Next I played Monster Hunter: World, where I made a buff, adventurous Ernest Hemingway who had a successful career doing what he loves best: killing enormous animals. I named my black-and-white Palico “Boise,” after Hemingway’s favorite cat.

More recently, I dipped my toes back into Stardew Valley, and obviously chose to inhabit the persona of a classic author who was born 121 years ago. His name is Ernest Miller Hemingway.

There is so much to work with here. I can’t make my cat black and white, so I name it Izzy the Cat, for Izzy the Cat, who was a tabby. My farm is called Lookout Farm, after Hemingway’s beloved home in Cuba, the Finca Vigia. I give him a mustache. Everyone tells me that he looks like my co-worker. 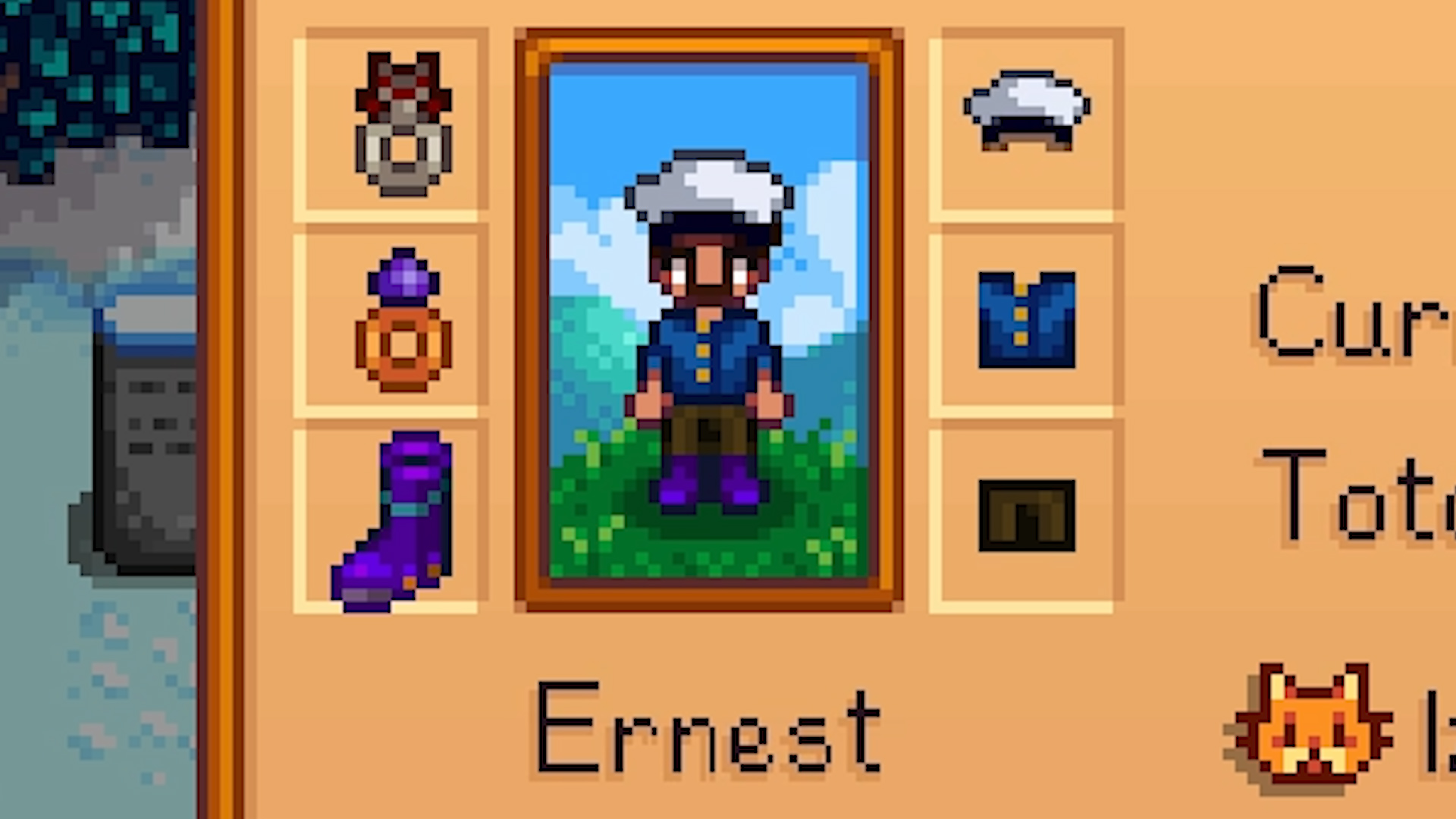 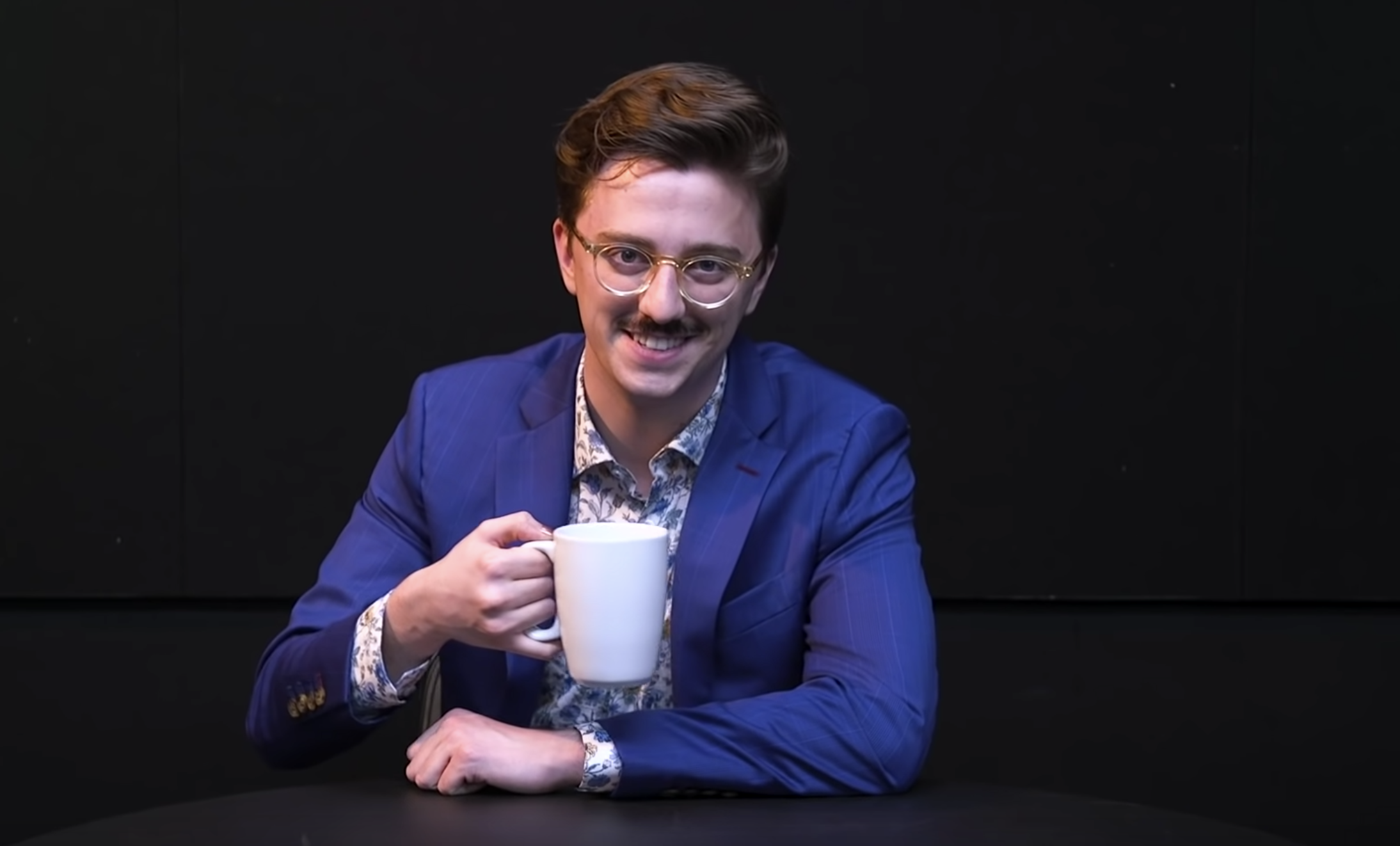 They are nothing alike.
Image: ConcernedApe/Chucklefish via Polygon and Photo: Polygon

What I shall not do is fish.

In the console version of Stardew Valley, the fishing minigame consists of mashing a button to control a bouncing bar until the catch meter fills. The bar needs to be kept behind a disgustingly erratic graphic of a fish, which bobs up and down and makes me scream.

When I began my Switch playthrough, I fished just once to see if it was as bad as I remembered.

It was!! Full of fury and frustration, I put my fishing rod in a box and said fie to Ernest Hemingway’s favorite hobby. He wrote beautifully about fishing in stories like “Big Two-Hearted River,” where the main character Nick Adams methodically cooks and fishes and camps, doing things just so. The undercurrent of the story, the iceberg, is how doing things properly is an antidote to shellshock.

He also wrote a story called The Old Man and the Sea. There’s fishing in that, too.

But I could not fish. I turned my meticulous Hemingway focus to the upkeep of my farm. I planted neat rows of crops. I purchased a chicken coop, then a barn. I named all of my animals after Hemingway’s cats (he had about 40 cats). I made a lot of beer. I fought in, and reached the bottom, of the mines. I fixed the bus to Calico Desert, I opened the quarry, and I restored most of the Community Center.

But I did not remove the glittering boulder, which is the reward for completing the fish bundles.

One day — I cannot remember if this was an in-game day, or a day in my real actual life — I had no horizons left to conquer. My farm practically ran itself. In-game winter was about to begin, and real-life winter was here.

There was no question about what I had to do.

It was time to learn how to fish.

Anyone who has ever complained about fishing in Stardew Valley has been told this: It gets easier the more you do it. That’s not just because of practice. Mechanically, fishing becomes easier as you level up because the green bar itself gets bigger, and you can buy rods that accept tackle and bait. But you gotta put in the time, and that time is misery.

I’m so bad at fishing that I can’t catch a single damn fish. But there was a ray of hope: People On The Internet say it’s possible to grind for skill points by catching trash. Every in-game day, I caught a little bit of trash in the ponds on my farm. Occasionally, I would even hook a fish! But I couldn’t catch those *ers. I hammered the Y button, gnashed my teeth, tried my best, and lost them all.

Walking by a river? I tried to fish. Exiting the mine and strolling past the lake? Let’s cast a line. Hunting for oysters on the beach so that I can fulfill the Crab Pot Bundle without fishing? Well, I fished, just a little bit.

I squeaked my way to fishing level 2. And though the fishing didn’t appear substantially easier at first … I had changed.

Quite suddenly, I caught a fish. And then another. Difficult fish still got away, but I was swimming in perch and bream and *ing sardines, you don’t even need them for Community Center bundles, what is the point. But they were mine. I had caught them.

A quest to catch a largemouth bass for dinner at Jodi’s house — a quest that I was resigned never to complete — was achievable! I did dine with Jodi and Kent. I made all my perch into sashimi for Sebastian. I caught a squid for Willy. I didn’t realize it was a Midnight Squid, so the quest is still incomplete, but it’s gonna be OK. I can catch more.

Knowing that I can fish feels — no joke — freeing. When I stop at the lake to fish, it’s not out of grim resignation to build XP. It’s a choice. I’m getting the hang of when to tap the button versus give it a firm press. I stop the bar from bouncing off the bottom. I win the fishing competition at the Festival of Ice.

But of course, we both know the answer to that question. It was never a question at all.

Freeridge Release Date, Cast, Plot, And Everything We Know So Far