Game Trailers: The Last Worker worth watching the Christmas trailer

You’ll have heard the Animal Crossing community refer to Marshall being “in boxes,” to symbolize that the villager is able to be dispersed somewhere else. This indicates that Marshal is on their island, however, he is packing up and ready to leave.

A villager being in boxes indicates that they can be interacted with by another player, which they can be persuaded to live on their island instead. Often when a popular villager is in boxes, the player who has them on their island will trade them with another player for a fee. Marshal can be traded for tens of millions of Bells and thousands of Nook Miles Tickets, given his popularity.

If you do not have this amount of Animal Crossing wealth, you likely aren’t able to get Marshal in this way unless you come across a particularly charitable player. If you do get invited to an island with Marshal in boxes, simply talk to him while he was packing away in his home and invite him to stay on your island instead. He should then move to either an empty plot on your island or will ask another villager to leave. 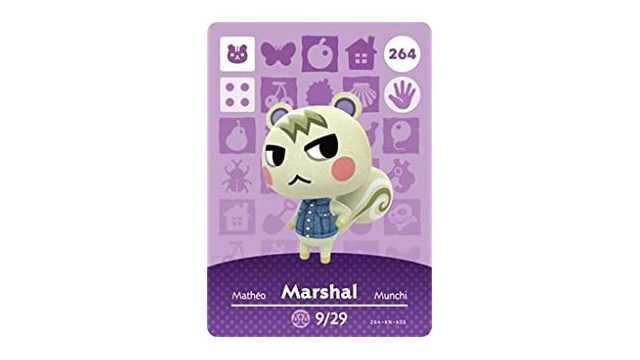 Another way to get Marshal is to invest in amiibo boards. You can purchase these amiibo cards from Amazon, and they’ll provide you with a set of six randomized villagers and NPCs. You can then go to Resident Services to scan them and get the villagers on the cards to visit your campsite. Marshal will be one of the villagers you pull from the pack if you’re lucky.

Marshal can be found in the series 3 Animal Crossing amiibo cards, and he’s also available to purchase individually. Purchasing him separately can be extremely expensive, so you may want to risk your luck by investing in random packs instead.

Get Marshal at your campsite

If you’re lucky, Marshal will pop up randomly at your campsite. Even if you have the full number of villagers on your island, you’ll still be able to persuade him to stay.

Frequently, you’ll be asked to play a game of chance in order to convince a camper to live on your island. Even if you lose the game of chance, keep on playing till you win (or Marshal gives up and asks Resident Services if he can move in any way. After doing so, Marshal will join your island.

Get Marshal via Nook Miles Tickets

Nook Miles Tickets will allow you to venture too far islands that often contain new villagers. In order to come across these new villagers, you’ll need an empty home on your island. This means that you’ll need to get a villager to moveout After doing so, Nook Miles trips will allow you to encounter new potential islanders you can ask to live on your island. You can convince him to live with you if Marshal is on one of these islands.

PlatinumGames Wants to Expand its Partnership with Nintendo