Grand Theft Auto creators Rockstar Games have been tipped to make a big announcement. It’s been over eight and a half years since GTA 5 first came out, and fans are still waiting for something – whatever – about what’s planned next. We know the next major GTA release will be a remaster of GTA 5 for next-gen consoles, and there are rumors of a remaster of the original PS2 trilogy. But the announcement that GTA fans are really looking forward to is the unveiling of GTA 6.

And while fans continue to wait for this highly anticipated reveal, a secret announcement from Rockstar Games has been plagued.

The GTA leaker has revealed that Rockstar Games has a hidden article on their official newswire site going live.

The GTA leaker wrote, “So, Rockstar skipped another article. Couldn’t mean anything or just set aside for a ‘GTAO Job Spotlight’ article etc. Heck, may not even have to do with GTAO.”

This article in the Rockstar newsline, which Tezfunz2 highlighted in mid-March, can be found at click here

Since this article’s disclosure, Rockstar Games has published numerous other Newswire articles.

But none of these pages have the same URL as the one that Tezfunz2 flagged, with this web address – at the time of writing – currently giving an error.

In a video online YouTuber MrBossFTW has speculated what this unpublished article could be about.

The GTA YouTuber said, “There is still a Newswire that has been made that has not been made public just yet.

“So you wonder what this article is about.”

MrBossFTW added, “So it really begs the question of what Rockstar Games is up to here and what they could possibly be talking about.

“Now I think a lot of people are very hopeful that this will be for the expanded and improved version of GTA 5, the standalone version of Grand Theft Auto Online – although they will likely be announced together. 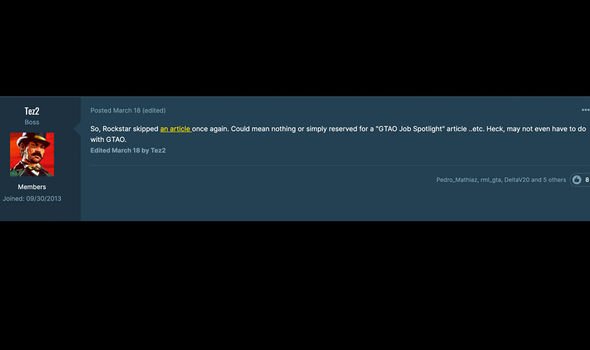 Rockstar Games could have a hidden Newswire article ready to be published (Image: GTAFORUMS)

“Or possibly what’s next for Grand Theft Auto Online.”

MrBossFTW also discussed rumors circulating in 2021 that Rockstar Games is about to announce a remaster of the original Grand Theft Auto PS2 trilogy.

The YouTuber highlighted how Tezfunz2 once again addressed these rumors on the GTA forums.

The leaker was asked by a fellow GTA Forums member if the announcement that community members teased in 2021 has already happened or if fans are still waiting.

And to this Tezfunz2 simply replied, “Not related to GTA Online.”

Speculating on what this could mean, MrBossFTW said, “So I think this is a clear indication that this is very likely for a title in the future, such as a new new title. older Grand Theft Auto games. “