How interesting is the new game “Two Persons”, which requires two people to play without single player?

GameLook report/From “Brothers: Legend of Gemini” to “Escape from the Sky”, every product released by producer Josef Fares always surprises players and the industry.

EA today officially announced a new trailer for the new two-player co-op game “It Takes Two” (It Takes Two), which will be launched in March. This game will be officially released on March 26 and will be available on PC, PS4, PS5, Xbox One and Xbox. Series X|S platform.

The new trailer for “Two Persons”:

This game still supports the strategy of “friends play for free”. The publisher EA allows players who have purchased “Two Persons” on any platform to send invitations to their friends, so that the other party can play all the content of the game without purchasing (Steam platform) You can use the “Friends with Fun” function). At the same time, it also supports the host to play across generations, but not across platforms.

“Two Persons” is a new cooperative adventure game created by Hazelight Studio. The studio hopes to strengthen the mode of combining cooperative gameplay with wonderful plots through “Two Persons”. Game director “TGA Tempest Brother” Josef Fares said that this game will open the eyes of players.

The clever fusion of plot and gameplay

“Two Persons” is full of challenges that integrate various themes, and through metaphors, it brings players a journey that combines gameplay and narrative, and promotes the interactive narrative experience in an unprecedented way. 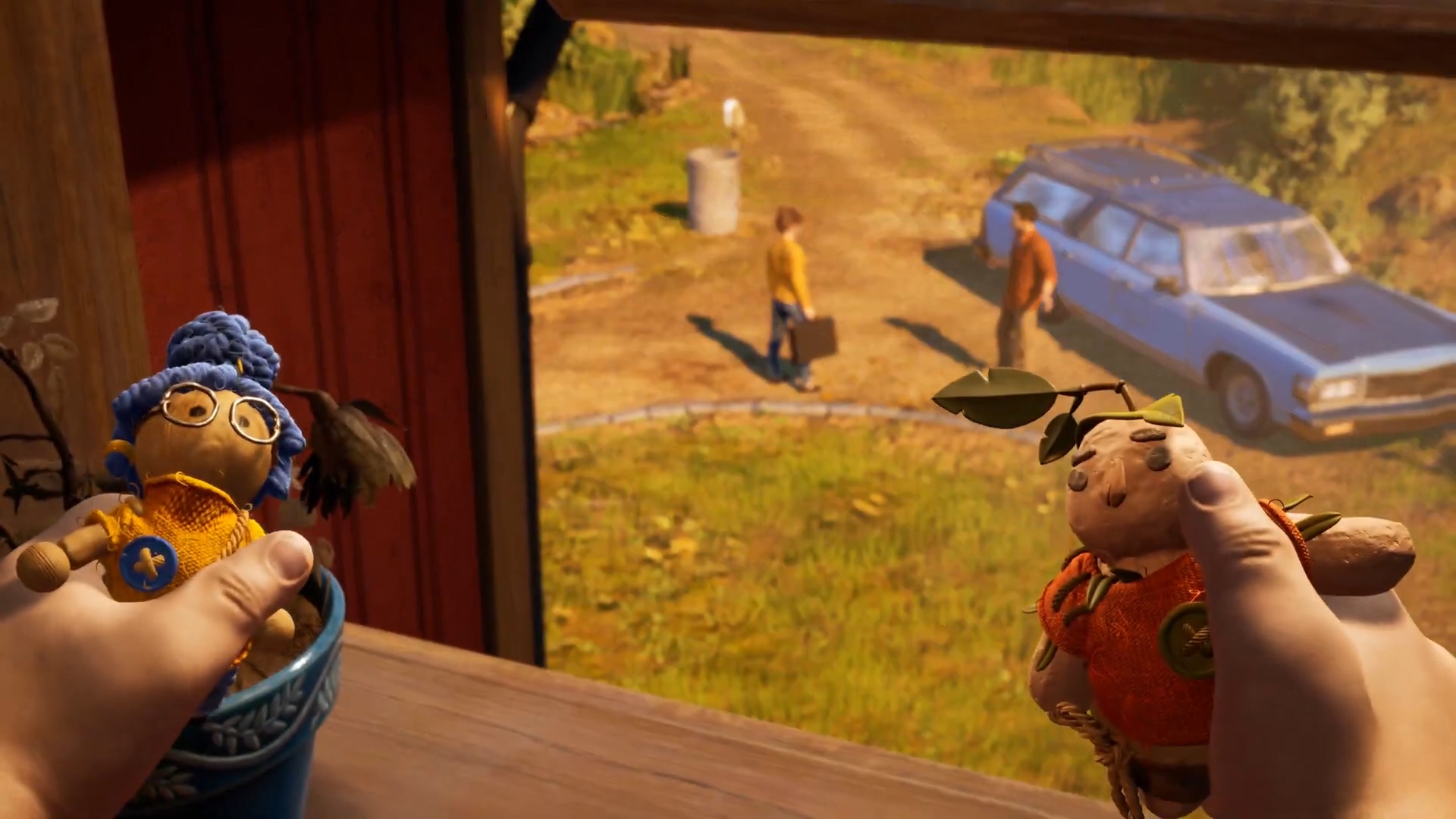 Players will play a pair of parents who decide to divorce in the game: Cody and May. After deciding to divorce, they become strangely dolls made by their daughters. They are trapped in a fantasy world. Here, thanks to the efforts of the love master Dr. Hakim, although they were a little reluctant, they still accepted various challenges to try to repair the torn relationship between the couple.

Marriage theme is still quite rare in the game. It turns out that the romantic comedy genre seems to be very suitable for the cooperative games created by Hazelight. The producer said: “For me, game mechanics and game content are the first. These contents determine what kind of story the game should present. Otherwise, the player’s narrative experience will become extremely passive.”

But storytelling through cooperative games can be difficult because, in essence, the game is designed to allow players to talk to each other, not to listen to the story. The game puts the main narrative beats into the cutscenes that the player can watch. At the same time, the characters are portrayed by joking between Cody and May when playing the game. Their dialogue will quickly make the player understand the relationship between them. The relationship between the two protagonists indirectly outlines the image of the two protagonists in the player’s mind, further deepening the sense of substitution. 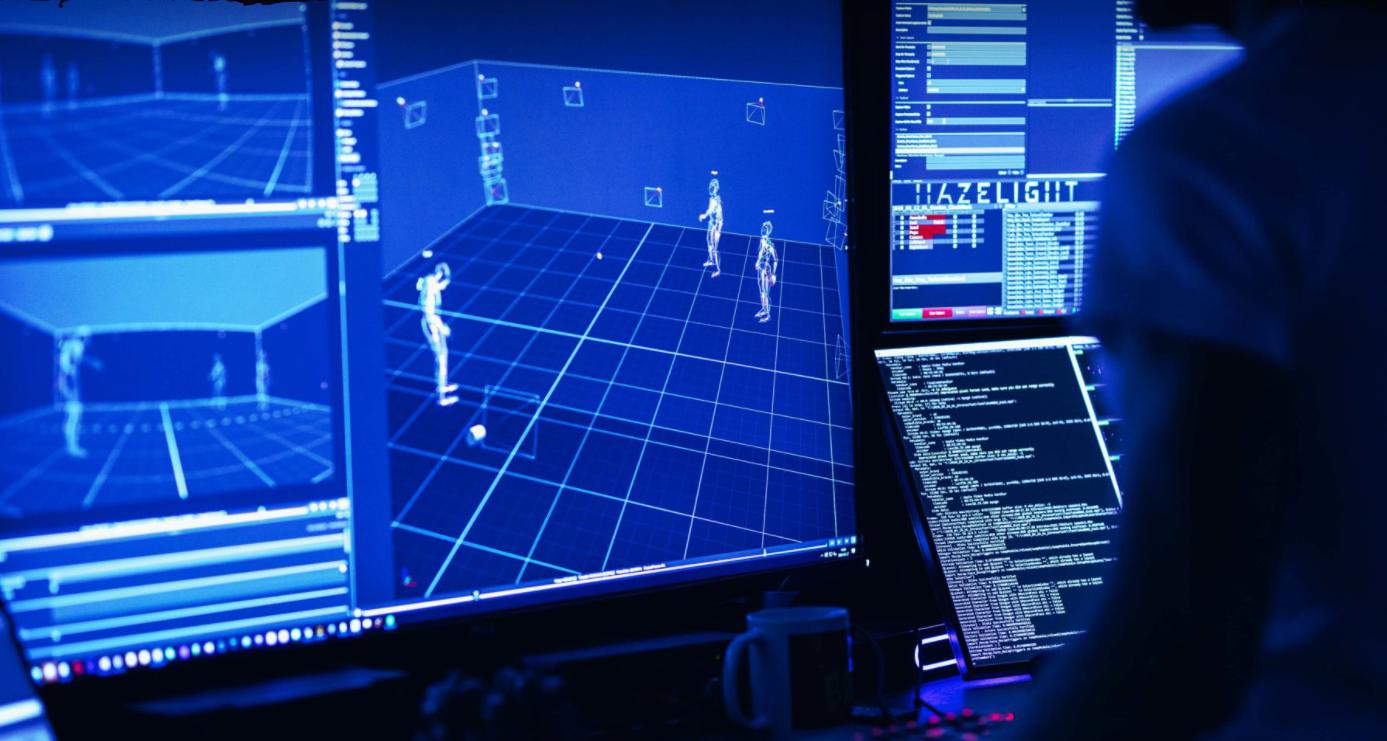 It is worth mentioning that the motion production process is influenced by the film industry, and the motion capture technology is slowly introduced into the game industry and played a key role in the game production process. Thanks to a fully equipped advanced motion capture studio within the production team, both the facial expressions and movements of the characters in the game are more realistic, making the character’s character creation more three-dimensional in the game. At the same time, from the scheduling of the shots, the promotion of emotions, to the control of the rhythm, many film and television skills can still be seen in the game. 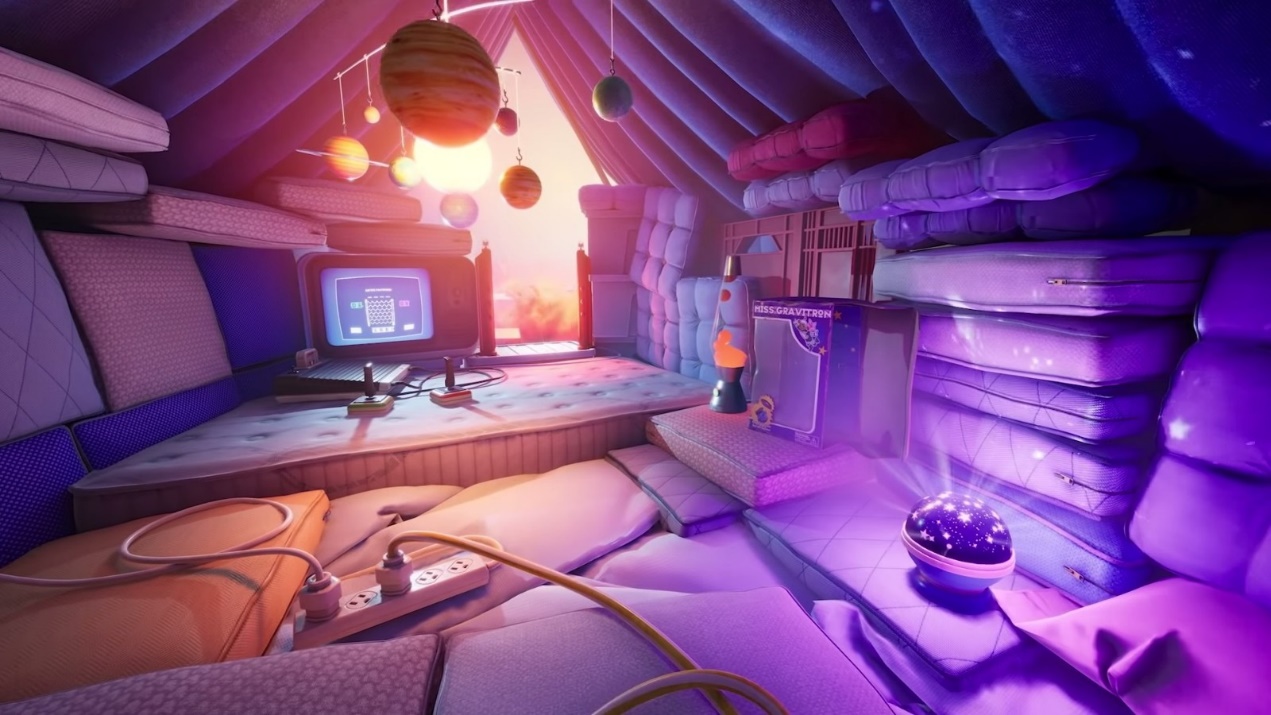 The picture style has returned to the fairy tale style. This is quite consistent with the theme and language style of the game itself. When the two are combined, it makes people feel that there is a strong effect, which is more powerful than those realistic and realistic painting styles that take the high-tech route. At the same time, the fairy tale style has a very strong affinity, and the characters are vivid and vivid, making the game screen more in line with the setting of a romantic comedy.

The type of gameplay contained in “Two Persons” is very rich. The producer mentioned in the game promotional video he personally explained that there is no repeated level design in “Two Persons”, and every new big scene, players will experience a new mechanism that does not duplicate the same, and these themes in the level design The elements are also closely related to repairing the emotional bond between the two protagonists.

Real machine demonstration of the game:

This also makes the producer Josef Fares feel more confident about this game. In an interview with Game Informer, he claimed that any player who is dissatisfied with this game and fails to pass the game will receive $1,000 in compensation.

In each new level, players will master unique and closely related character abilities, and good cooperation between players is required. For example, Cody’s main operation is to launch a nail into a wall so that May can swing on the nail with the hook of a hammer. When Cody and May fall into the war between squirrel and wasp, the game will be equipped with a complementary gun: Cody shoots the sticky flammable sap, and Mei’s fired gunpowder ignites the so-called sticky flammable tree. liquid. 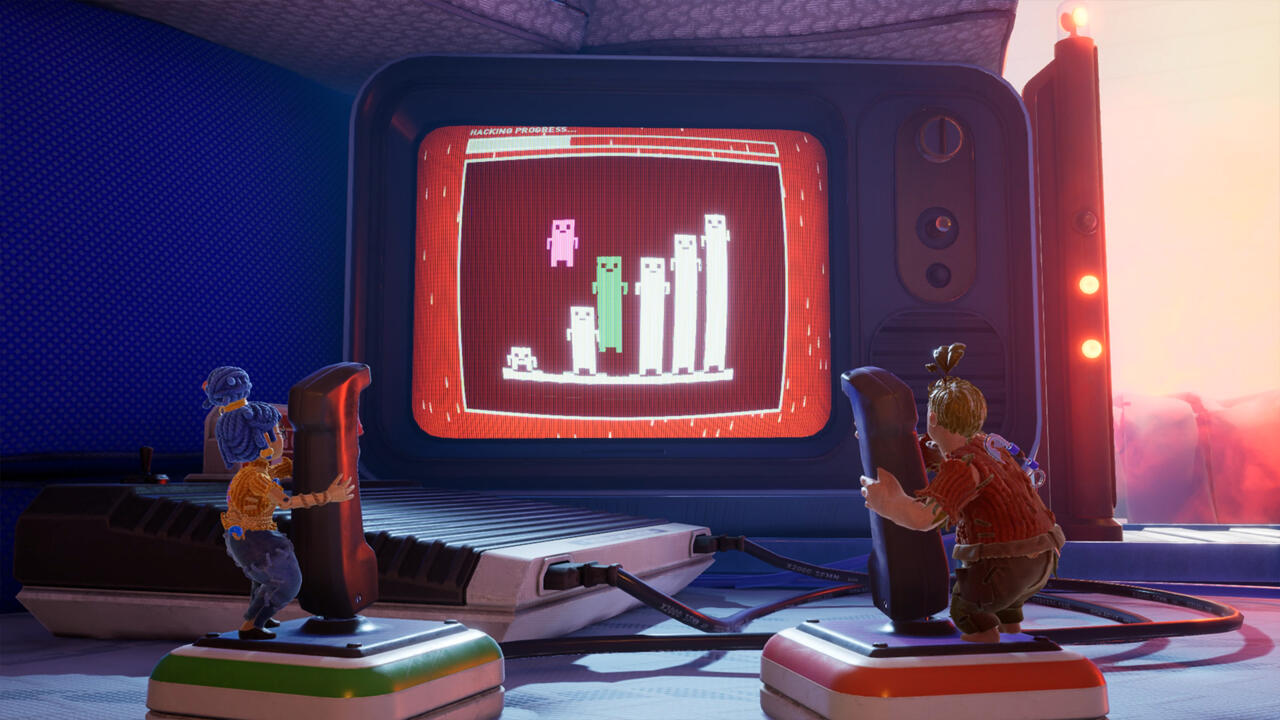 In addition, the game also added 25 optional two-player mini-games in the process, and the characters are perfectly integrated into them. Sometimes there are small quarrels between Cody and May, and the gameplay echoes this dynamic. For example, May defeated Cody in the game of Hamster, but Cody soon began to take revenge in other mini-games. These interesting and detailed settings give players a more immersive experience.

The difficulty of the game is challenging enough to maintain the rhythm of “Two Persons”. At the same time, the game also takes care of the game experience of non-hardcore players. If a character dies, they will respawn almost immediately, and at more specific challenging moments, such as fighting a BOSS, the dead player can press the button. Speed ​​up rebirth.

According to the official statement, the game time for players to pass is between 14-15 hours. Although it is not up to the level of 3A games, it is definitely bigger than “Escape from the Sky”. 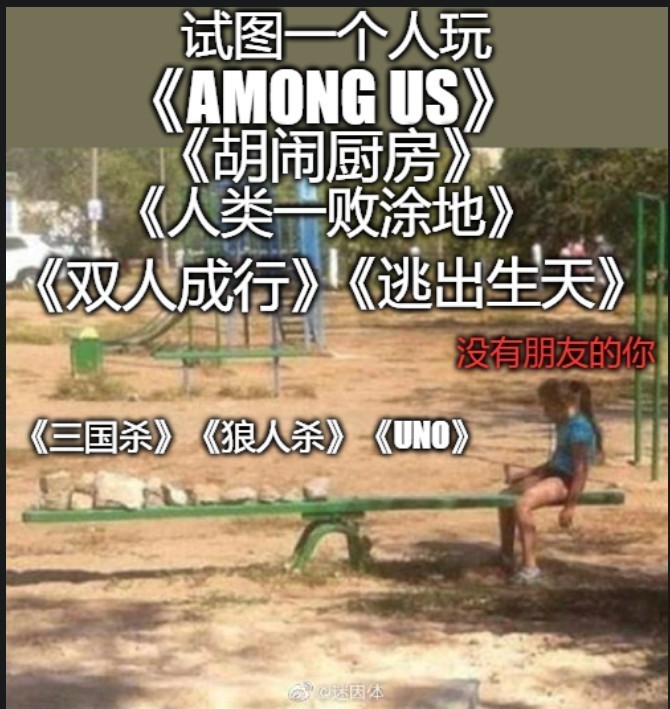 However, it is worth noting that, like “Escape from the Sky”, the game still has no single-player content, and only supports online or local double-play. No matter which method is used, it is displayed on a split screen, which provides players with A very good experience, so that players can browse at the same time, without worrying about the display content only contains a single character.

Although the adventure process relies heavily on efficient communication between the two players, the online restrictions made by the game largely ensure that the relationship between the two players who play together is close enough, and efficient communication and cooperation can be carried out. From the actual situation, as long as the obstacles to communication and coordination are resolved, the process of customs clearance is easy and smooth. 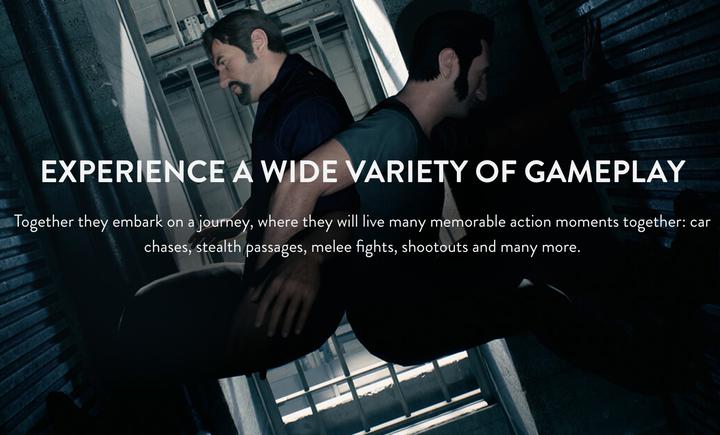 The category of two-player games is currently not common, but it does not mean that there is no market. As a 3D adventure puzzle game with a small investment, “Brothers: Legend of Gemini” has already surpassed 1.5 million sales on Steam and won numerous awards. Another work of producer Joseph Fares, the interactive movie “A Way Out” may be more famous. The sales of “Escape from Birth” reached 1 million in the first two weeks, and three months later, its sales exceeded 260. Million, far exceeding the expectations of the publisher EA. This means that this unique design that can only work with two people has won market recognition.

With the good reputation of these two games in the market, Hazelight has formed a brand effect. In the eyes of many players, Hazelight has even become synonymous with the quality of cooperative games. 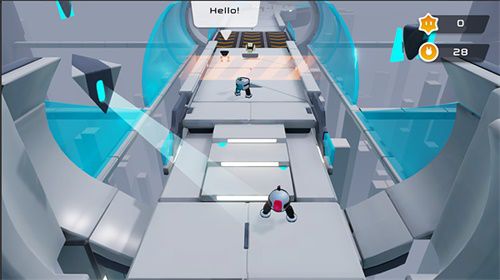 And Hazelight’s latest work “Two Persons in a Row” once again shows the difference, creating this new type of cooperative adventure game. Joseph Fares, who used to be a film director, combined his professional skills in film and television production with game production to perfectly express the inherent drama in two-player cooperative games. Gameplay is created by combining storytelling. Ensuring that the gaming experience is critical to the story, and vice versa. This successful exploration will also bring new ideas to the field of game design.

It is understood that Hazelight will launch several games in the future, and it will still be a cooperative game type. The producer said: “On the basis of cooperative games, I think we have a lot to do in the creative development of games today. We can make better games, tell better stories, and create more touching emotions.”

What is the Powder that claims to be “Meta Universe Instagram” after raising US$14 million?