Fortnite down reports are emerging today with players affected by a series of nagging issues (Image: GETTY • EPIC GAMES)

Fortnite server down reports are emerging today, affecting Battle Royale players with a range of issues. Login issues, matchmaking issues, and lack of friends on a user’s friends list have hit the hugely popular online shooter today. Fortnite players trying to access the Epic Games hit are also greeted with an ‘Invalid Client’ error when trying to log in.

The Fortnite down issues coincided with issues with the Epic Games Store and Epic Online Services.

The account tweeted, “We are investigating issues where login to Epic Games accounts fails with the error” Invalid Client “and prevents login to the game.

“We will notify you when this issue is resolved”.

While the Epic Games Store also posted Twitter, “We are aware of a problem logging into Epic Games accounts.

“We will notify you when this issue is resolved.”

Since then, the official Epic Games status page has said that the issues with online services have been identified and a fix is ​​being implemented.

About half an hour after confirming the server problems, the official Epic status page said, “The problem has been identified and a fix is ​​being implemented.”

At the time of writing, the Epic Games Status page says that some aspects of Fortnite are experiencing diminished performance. 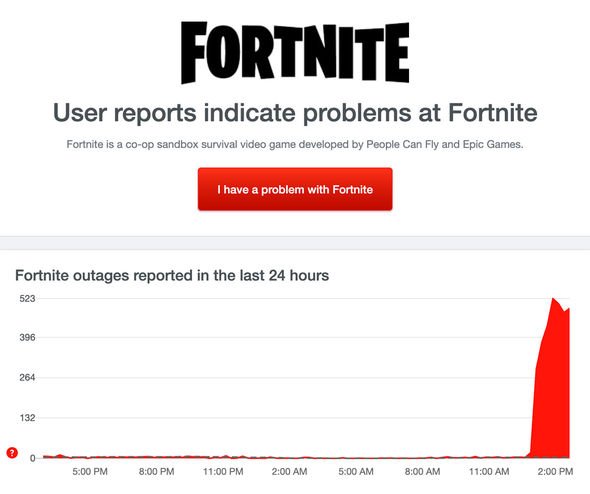 Down Detector recorded a spike in Fortnite Down reports today (April 6) (Image: DOWN DETECTOR)

These areas of the popular game are: game services, login, parties, friends and messaging, as well as matchmaking.

When the Fortnite and Epic Games server problems hit, gamers took to Twitter to report the problems they were facing and to find out if others had been affected with the same problems.

One tweeted, “Epic Games Login Services seems to be down at the moment, many people are unable to login, on any platform!”

While another reported, “Fortnite can always improve their game, I swear.”

One added: “Why is Fortnite down, can’t log in”.

And another wrote, “Epic Games Login Services is currently unavailable.”

According to Down Detector’s statistics, about 63 percent of affected Fortnite users experience server connection issues, 35 percent of which have login issues.