GameLook reports/It is no exaggeration to say that 2021 is destined to be an extraordinary year in the history of domestic games. This is not just the beginning of the year, the domestic space sandbox building game “Dyson Ball Project” quickly became popular. And less than a week later, another sandbox repair game “Ghost Valley Bahuang” also appeared on the Steam Hot List.

But strictly speaking, compared to the former’s sales of 350,000 in the first week, the performance of “Ghost Valley and Bahuang” is obviously more amazing. During the Spring Festival, this immortal repair game Steam, which focuses on Shanhaijing elements, once exceeded 180,000 online users, setting a record for domestic games on Steam. 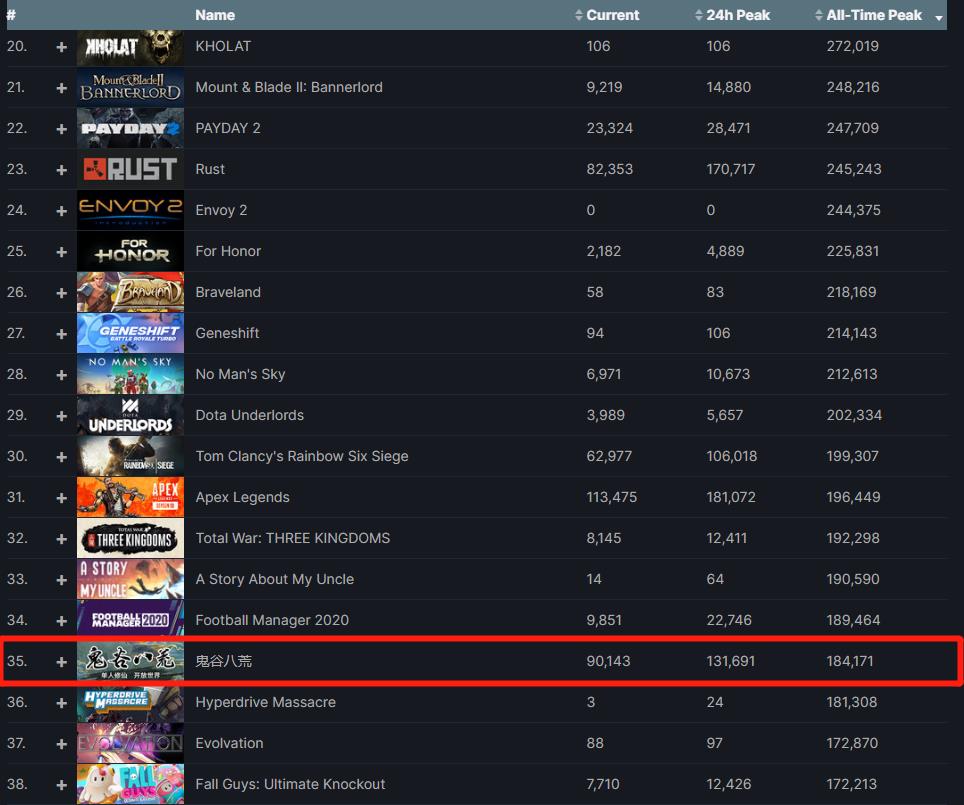 This can’t help but make people more curious. How much has the “Ghost Valley Bahuang” that has climbed to the top? Of course, the current official team has not released specific data for the time being, on the grounds that it would appear that we are too eager for quick success. But we can also make some calculations based on existing information: 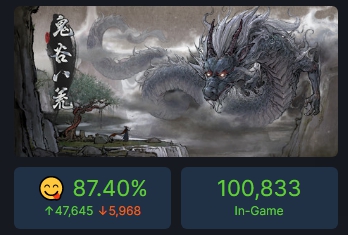 Therefore, GameLook boldly guessed that “Ghost Valley Bahuang” may have reached a new milestone, that is, sales exceeded 2 million sets. At the same time, judging from its price of 68 yuan, the game is clearly the first explosive product with a revenue of over 100 million yuan this year, and it has made a good start for domestic games.

But it must be mentioned that the number of online players in “Ghost Valley Bahuang” has also declined significantly. Today’s 116,000 online players are not small compared to the peak period. Undoubtedly, what many players say “insufficient content and high repetition” are still the biggest shortcomings that the game needs to solve urgently.

From “Taiwu Picture Scroll” to “Amazing Immortal Cultivation Simulator”, and then to “Ghost Valley and Eight Wastes”. In fact, there are not many domestic indie games of the same type that have succeeded in recent years, but “Ghost Valley Bahuang” has set a record one after another. And let the players indulge one after another, calling out “this is true immortality”. Behind this collective carnival, to a large extent originated from Guigu Studio’s own label of Xiuxian fans. 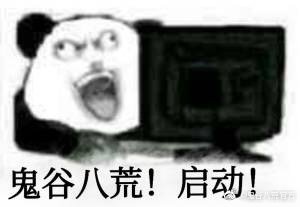 In fact, Zhang San, the producer of “Ghost Valley and the Eight Desolations”, is a heavy fan of immortal cultivation novels. After experiencing the crisis of the dissolution of the team in 2018, with the vision of “I want to leave my own work before leaving the industry”, Zhang San decided to create a game of immortality in his imagination. Fortunately, the remaining two core members were also fans of Xiuxian, and the initial three-person team was formed naturally.

Of course, such a strong natural and friendly atmosphere has been retained afterwards. In an interview, Zhang San said bluntly when talking about recruitment. First of all, it depends on whether he is a fan of Xiuxian novels, how much he loves the subject, to what extent he plays Steam games, and then his professional skills and resume are considered.

It is rooted in the love of the team itself, this small team of only nine people before the launch can create this most immortal game.

And shortly after the “Ghost Valley Bahuang” went online, Zhang San also posted on the Zhihu platform: “There is a broken poem in every realm in the game. I wrote it. I want to give it to you who have been working hard in reality. Daoists who have changed their fate.” Under this 4,000-plus-like testimonial, many users sighed with emotion, “In just a short paragraph, the plots of the Internet articles from junior high school have come out.”

However, compared to the enthusiasm of the R&D team, the player’s support for “Ghost Valley Bahuang” is obviously more significant. In the interview, Zhang San admitted that he had set only 6 main story frames for the game. Other content, including weather luck, fate change, NPC dialogue, opening event, etc., are all contributed by players. He even made an EXCEL form template, allowing players to fill in the blanks directly. In the end, the proportion of content created by players accounted for almost 80% of the full text of the game. 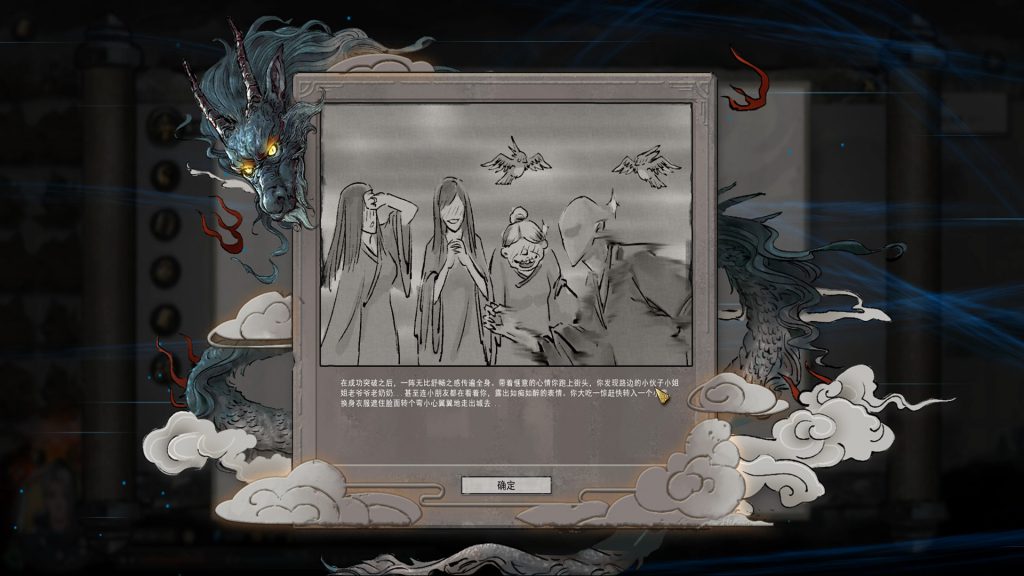 “Like them, I am a fan of Xiuxian novels. Everyone wants to restore the world of Xiuxian that has been supplemented by their own brains, and the direction of their efforts is the same.” Just like Zhang San said, it was just grasping tightly. With the core demands of users, the R&D team can successfully restore the refreshing points in the Xiuxian web articles, and finally “satisfy the fantasy of Xiuxian novels that have been read, and is a game that fans of Xiuxian will love”, making it difficult for most players to extricate themselves. .

The world of immortality with a sense of substitution, the long-term experience content is slightly less interesting

In the same passage of Zhihu, Zhang San called the game “not only romantic, but also cruel, and some places are still very vulgar.” In his eyes, cultivating immortals is more like human beings, so the game is also called “modern cultivating society” by players.

Different from the game that tells the main storyline step by step, “Ghost Valley Bahuang” focuses more on allowing players to interpret their own stories under a large framework, bringing players an unprecedented sense of substitution in the world of cultivating immortals. In particular, every NPC in the game has its own motives. Attacks, snatches, likes players, and a lot of anecdotes all have their own reasons. 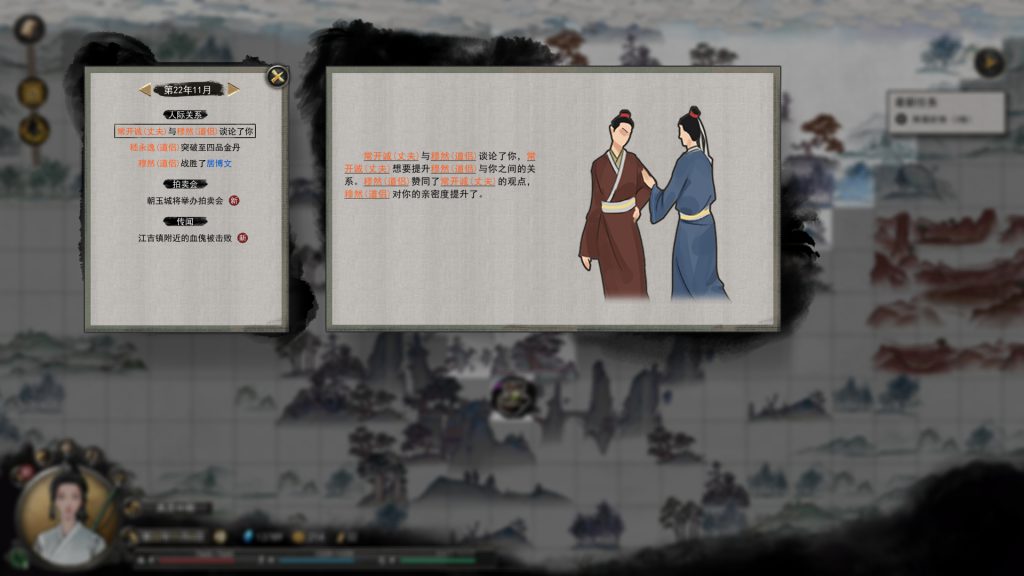 As a result, a large number of players became obsessed with interacting with NPCs, looking for friendships with NPCs with similar personalities, gangs, and so on. There are both fairy tales and love stories, which can now be seen on all major platforms such as Steam, Zhihu, and Weibo. Players are writing all kinds of interesting encounters. 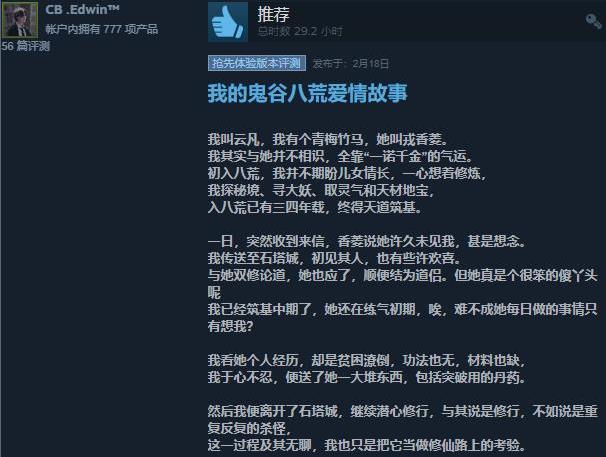 But as groups of excited players poured in tirelessly, various shortcomings of “Ghost Valley Bahuang” were quickly exposed. In fact, the game was originally planned to be launched at the end of this year, but could not bear the repeated urging of players, and Guigu Studio had to put the EA version of the game first at the beginning of the year. 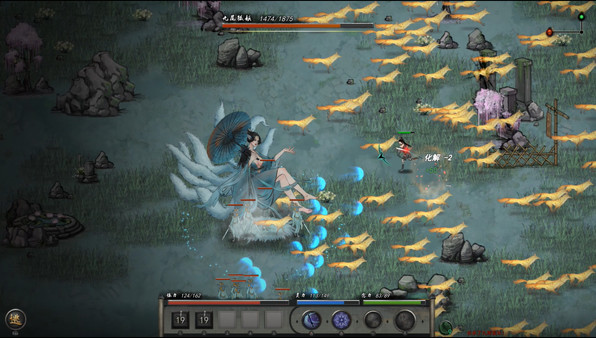 Producer Zhang San also said that the R&D team spent a lot of time building the framework and the core combat system in the early stage. In fact, the game is currently only one-third completed. It is not difficult to see from the Steam announcement that many gameplay content has yet to be slowly updated. As a result, problems such as continuous game bugs, insufficient content, high repetitiveness, and high liver levels began to gradually appear.

Many players said frankly: “Because the degree of completion is not high, the freshness is very boring after passing. From training to crystallization, it is still very interesting, and it will be repeated from the beginning.” Raised to a level, changed the name of the monster in almost the same map, changed the name material, and learned the method of changing the name.” 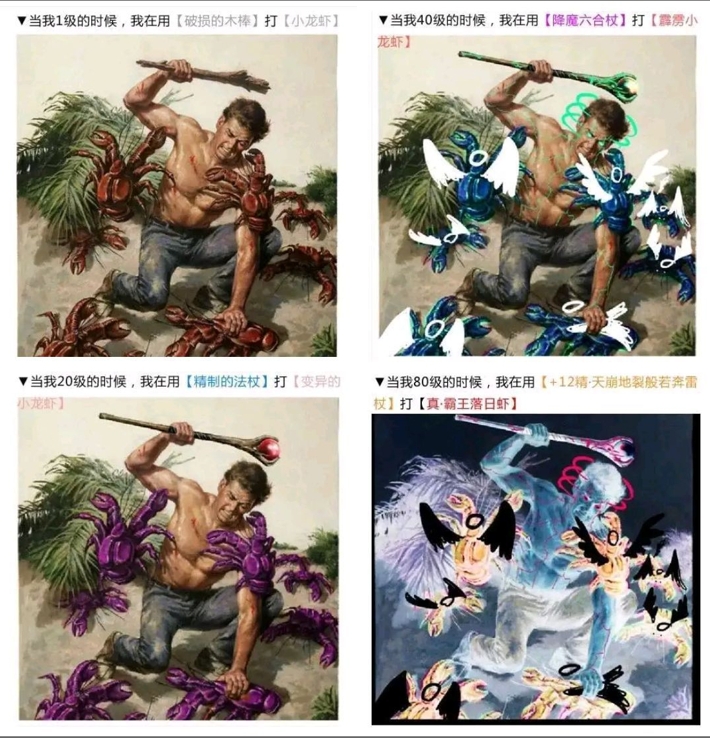 Of course, the R&D team also recognizes these problems. The limitation of the number of teams has caused Guigu Studio to focus on optimization and improvement at present. “Even if the recruitment is smooth, generally it will not start working so quickly in a short while, so the big version in March still has to rely on the liver of a few of us.” Judging from the news released by the official account of its B station, in a short period of time The game is still difficult to add some larger new content. 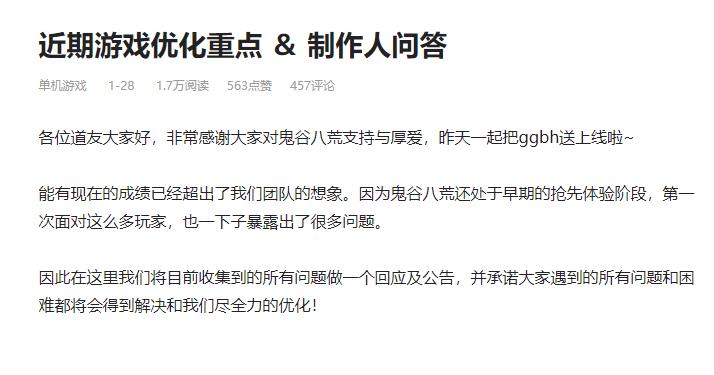 However, as promised after the release of the PV in 2018, the game producer has repeatedly repeated the sentence “Everyone, please be patient, rest assured, Zhang San will complete it.” This sincerity has also allowed more players to choose. Wait, and look forward to the future performance of this explosive solo tour.

Overseas Taoists eagerly ask for the English version. How difficult is it for foreigners to cultivate immortality correctly?

From the early years, news that Xiuxian novels became popular overseas spread like wildfire. There are countless rumors, such as quitting drug addiction due to chasing and cultivating immortal texts, and actively learning Chinese in order to understand novels. Obviously, foreign users are obsessed with the theme of cultivating immortals. Some foreign players have made their own simple English MOD in order to experience “Amazing Immortal Simulator”.

Today, this situation also appears in “Ghost Valley Bahuang”. Some foreign players on Steam said that they had “hardly chewed” this game with a mobile phone translation without English.

At the same time, the call for “WE NEED ENGLISH” was constantly spreading in the comment area. Many foreign players said that there is no need to add English dubbing, as long as English subtitles are added, they will be sold immediately. Even under an English comment published at the end of last year, more than a hundred “we need English” replies have been accumulated. Obviously, more and more foreign players are also attracted by this pure immortality game. Unfortunately, the game currently only supports simplified Chinese. 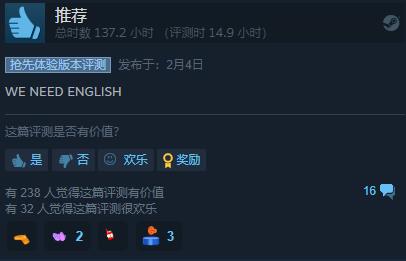 It is worth noting that compared to other themes, it is difficult for foreign players to understand the various magic weapons, exercises and other proprietary vocabulary in the game of cultivating immortals by relying on simple English mods. And even for a professional translation team, how to “sincerely” convey the characteristics of immortality is equally difficult.

Prior to this, the English localization project of “The Great Immortal Simulator” had been underway for nearly a year. It is necessary to satisfy the translation habits of the early individual translators, and to make the vocabulary full of immortal meanings conform to the foreign cultural environment. For example, for the term “break through” that is commonly used in novels, the translation team repeatedly struggled with “limit break” and “break through”. But in order to take care of the player’s habits, I finally chose the latter with a slightly weaker ideology. The difficulty of localizing the theme of Xiuxian in English is evident.

Going back to “Ghost Valley Bahuang” itself, for the enthusiasm of overseas players, the official has also stated that due to the long time-consuming work of English localization, for the time being, we can only focus on BUG repair and other tasks. Consider it for the first time. But before that, accurately translating this mountain is a difficult problem that must be overcome. 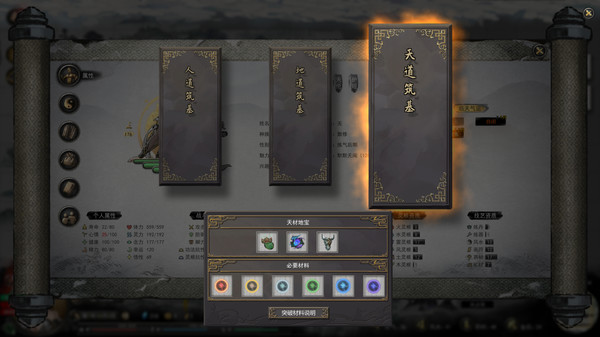 It is foreseeable that after the end of the EA stage, global distribution will also be an inevitable choice for this excellent sandbox fairy repair game. At that time, a large number of foreign players will be influx, and the game may also have a new round of online climax. Not only that, when more and more such excellent domestic indie games move into the global market, the rise of China’s indie games in the future will be truly accepted by players all over the world.