GameLook report/NEOWZ said on the 25th that the official version of the 2D action game “Small Bones: Hero Killer” developed by SouthPAW Games has sold more than 100,000 copies, and reached the second best-selling worldwide on the day of its launch, and It is still growing steadily. A NEOWZ official said: “This is a feat that Korean indie games have achieved in the global game market.” 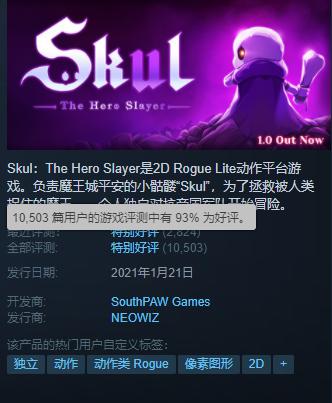 Relying on the novel gameplay, “Small Bones: Hero Killer” has not only gained huge sales, but also won a good reputation among players. Won 93% praise in more than 10,000 reviews, and won the “2020 Republic of Korea Game Awards” Independent Game Award, “2020 Unity Korea Game Awards” Best Innovation Award and other awards.

SouthPAW Games is a small independent development studio composed of 9 core members who were originally university classmates. They started to produce “Small Bones: Hero Killer” in the game development club in 2017. After it was released on the Early Access version in February 2020, they established a dedicated community on Steam, which constantly balances the game through communication with players Game mechanics and rich game content.

Promotional video of the game

Unlike previous games, “Small Bones: Hero Killer” uses an anti-hero story. In the game, the hero becomes a villain. After the mankind sends the most powerful hero to kidnap the demon king, the player will play a small bone to face the empire. His army rescued his king and had to kill some heroes in the process. 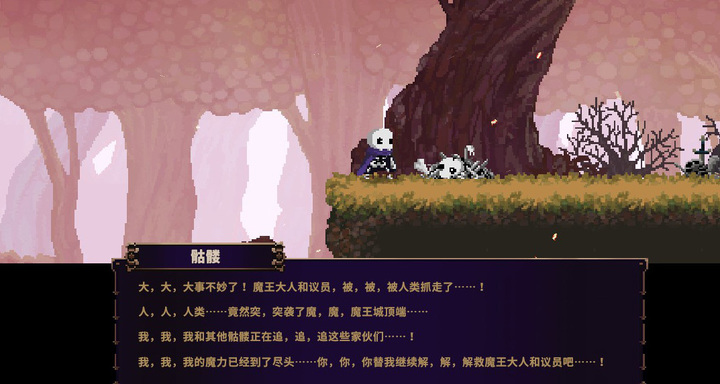 The game has designed four different characters for the players, interspersed with cutscenes, and added dialogue between the characters to further tell the story. However, since the dialogue in the game is plain and unrelated to the plot, the players are not satisfied, and many players have chosen to skip the animation altogether. Even though the dialogue is a bit awkward, the framework of “Small Bones: Hero Killer” and the retro world of knights are absolutely full of charm.

Starting from the “Devil Castle”, in order to defeat the final BOSS of the game, the player first needs to clear five main levels, which also contain many small levels. The player will only have the portal of the next level after all the enemies have been eliminated. turn on. At the same time, the game does not have the concept of forked roads. Once the player enters the level, there is no retreat, and they can only move forward through the only exit in the room. 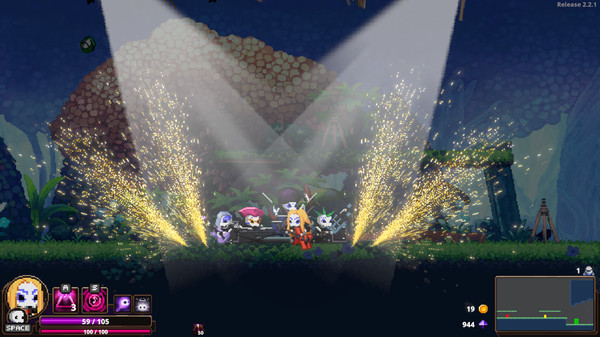 The game adopts the traditional pixel style of independent games, but the retro style does not make players feel that the picture quality is rough, but every inch reveals the exquisite picture. All character action production teams have been carefully polished to maintain a high level of fluency during the battle. At the same time, each small bone also has different special effects, making the battle screen more impactful.

Provides traditional hack and slash fun in a unique way，This is the biggest charm of this game. The “head change” design integrates changes in weapons, skills, and operating characteristics, making the game seem simple but extremely playable, which has greatly attracted the attention of players.

Demo video of the game

After several revisions of the version, there are currently more than 70 skulls for players to choose from. Skulls are divided into four types: common, rare, epic, and legend based on their rarity. The focus of each skull will vary from strength, speed, and balance. Generally speaking, the higher the level of the skull, the more powerful, but because the same skull can unlock different skills each time, some mediocre skulls will also be very strong. 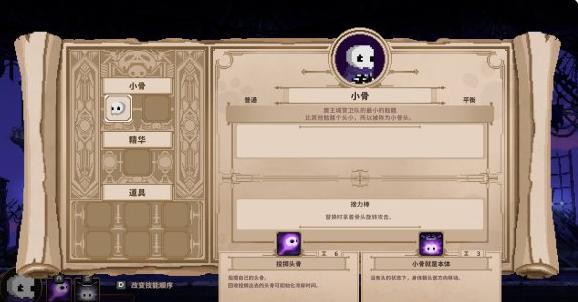 Players can keep up to two types of skulls at the same time. Although they can be switched at any time in the game, the skulls will have different lengths of cooling time due to their quality. After passing through several maps, the player will generally encounter a supply map. Players can discover more powerful skulls from the remains of warriors, and replace them with corresponding skills and characteristics. In addition to obtaining skulls in this way, players can find skulls after killing enemies, or they can buy skulls from merchants in the game.

The combination of two different skulls will also produce different effects, making the game’s battle more colorful. For example, some skulls allow players to quickly obtain gold coins, and some skulls can use giant maces to cause huge damage in battle. However, in most cases, players need to make a choice. One skull will provide a weapon. While enhancing the player’s attack power, it will inevitably reduce the character’s flexibility. The other skull allows the player to quickly move between enemies. Sprint, the character’s armor defense ability is also reduced.

After defeating the BOSS, you will get a treasure chest, in which you can get a piece of equipment. The higher the quality, the more the effect and the stronger. In addition, the equipment will also provide special bonuses according to the type of skull, so players need to choose the appropriate equipment to do it. Match. In addition to boss drops, you can also find collectors to buy them in the refuge area. 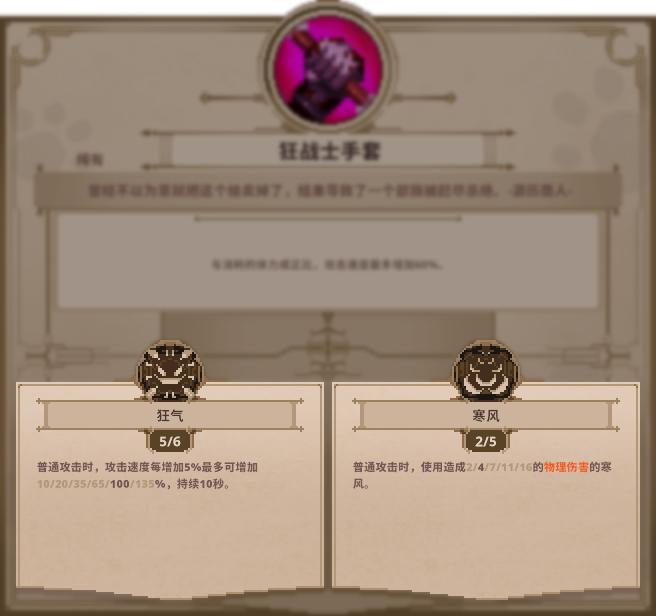 Since there are only six item grids in the game, this limits the improvement of the game value and the impact of the screen to a certain extent. In response to this situation, the developer introduced an engraving system. All items will have two inherent engravings. Players can add more engravings to the items from this system to exert greater power. At the same time, the developer also said: “All the marking effects are designed to enhance the performance of their props. We hope that players can play the game in the direction they want to develop.” This approach greatly enriches the player’s gaming experience.

A collection of Roguelike games

“Small Bones: Hero Killer” almost integrates all the mainstream Roguelike gameplay on the market. The map and various reward systems that change every time the game, as well as the characteristics of the player returning to the original starting point after failing through the level, will appear in the game. The skills and bonuses obtained from the equipment are also random. For example, the werewolf skull will always increase the character’s movement speed, but will bring different active skills, and the player will never know what will be obtained. 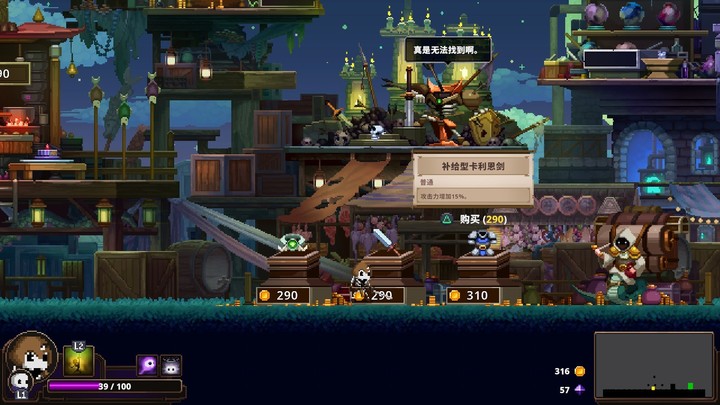 Each big level is fixed, but the small ones appear randomly. The scenes, traps and enemy configurations of each round of battle will be randomly generated to ensure that players will not experience exactly the same battle twice. Defeating enemies or BOSS in the process of breaking through the level, you can get some gold coins and magic stone rewards. The gold coins can buy bonus equipment and supplies in the random shop that appears, and the magic stone can improve all aspects of the character’s own attributes to help the player In the next battle to get a good promotion. 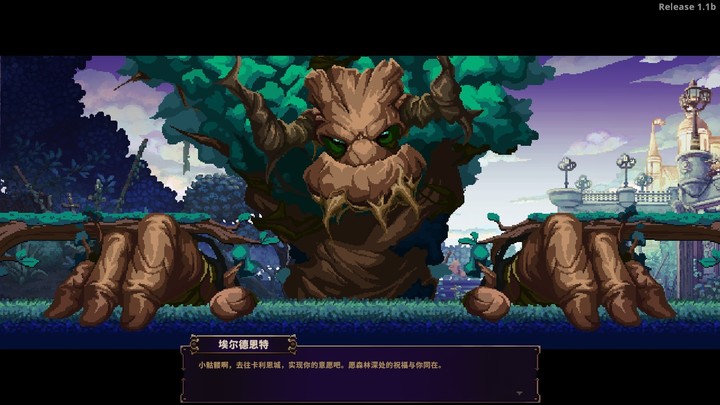 But after many random gameplays in the fusion, the game also brings many problems. Obtaining powerful skulls depends on luck. Players cannot choose their favorite skulls to fight. At the same time, certain skulls are not a good choice against powerful enemies in the game. This means that some of the process of breaking through the level is almost from the beginning. Doomed to fail.

Another issue worth noting is that from the early access version to the official launch, players cannot choose to save and exit during the game’s progress. If the player wants to leave the game, he must give up the battle. When the player finally arrives randomly A powerful skull, after passing a certain level, you have to start again.

In response to this problem, the production team has also optimized it. Although the character will start from the beginning after death, it still retains the magic stone to help the player strengthen the character. At the same time, the game also designed the “Novice” mode, which can directly increase the value of 100 points after it is turned on. With the blessing of double the blood volume, the player’s chance of clearing will be greatly improved.

Whether the player is good or bad, it reflects to a certain extent that the game has some deficiencies in the balance. With the deepening of the level, the types of enemies not only gradually enriched, but the damage also increases, so that the player has not been exposed to it yet. It’s over before BOSS.

It can be seen from the success of this game that horizontal action plus Roguelike gameplay is still popular with players. Although this game still has some shortcomings after it is officially launched, according to the speed and quality of the production team’s update, it has huge potential in the future. Perhaps, as the promotion team said, this game will be a Korean independent game. A new benchmark in the global market.