Focus Home Interactive and developer Gasket Games have announced that their upcoming, Warhammer – Age of Sigmar: Storm Ground, based on Games Workshop’s fantasy universe of Warhammer Releases May 27 on Xbox One, Playstation 4, Nintendo Switch and PC and is available for pre-order now Check out the new trailer below for a taste of the world of Warhammer

Warhammer – Age of Sigmar: Storm Ground is a turn-based strategy in which players move one of three customizable armies through the Warhammer world in a single player campaign or online against others.

The three armies players will lead are the eternal Stormcasts, the creepy Nighthaunt, and the newly revealed Maggotkin of Nurgle. Described as “a flood of death riding on the back of a colossus,” the Maggotkin can corrupt everything they encounter and create dangerous zones of corrupting rot on the battlefield that can wreak havoc on the enemy.

As players progress through combat, they can unlock and collect new cards that provide new units, abilities, weapons, and equipment that can be used to adapt the army to any playstyle. 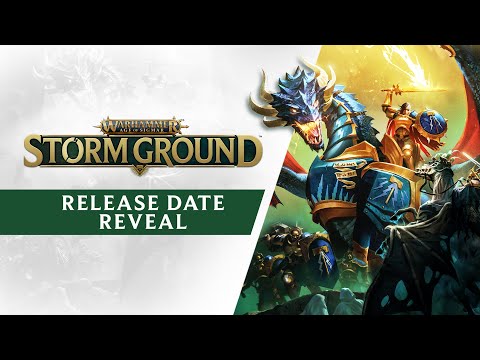 Warhammer – Age of Sigmar: Storm Ground releases on PC and consoles on May 27.

Pre-orders are available now on Xbox One, Playstation 4 and PC and will gift those who do with the Spoils of War Weapon Pack that grants access to one exclusive weapon for each of the game’s three armies.

PS5 VK Restock Exact Date Revealed: This is when you will be able to buy a PlayStation 5 next time