Breaking 100,000 online and rushing to the top of Steam: Why are OUTRIDERS mixed?

GameLook reported/ mentioned the recent game masterpieces. Except for Capcom’s Monster Hunter: Rise, it would not mention the action shooter “Outriders” developed by People Can Fly and published by Square Enix. “. 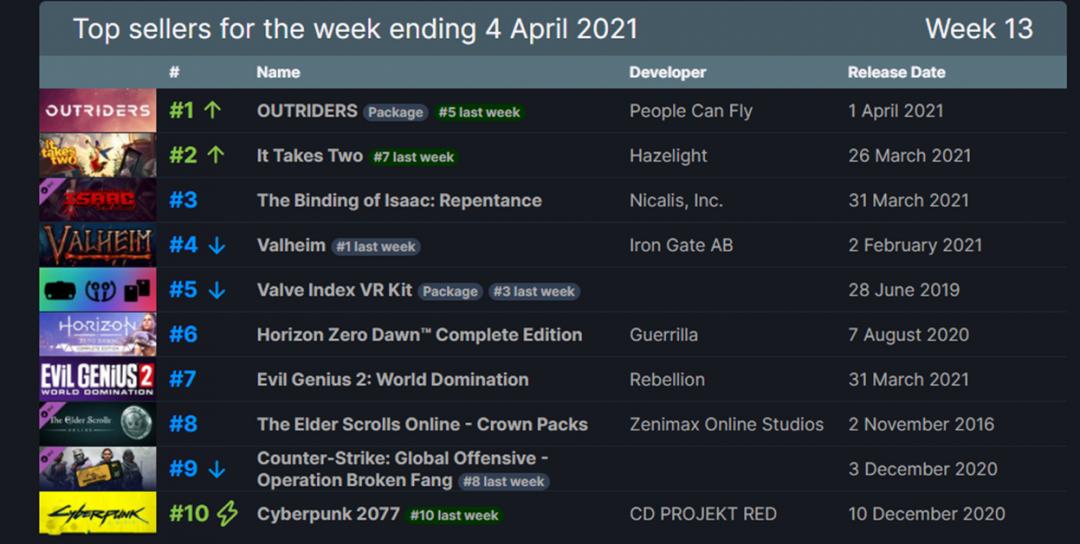 As the most anticipated shooting game in April, “Outriders” was officially released on April 2, landing on PS4, PS5, Xbox One, XSX/S, PC and Stadia platforms. In a short period of time on the line, it rushed to the top of the best-selling list, and successfully reached the top in the weekly sales rankings, showing its strength.

For People Can Fly, the production team of “Outriders”, players may not be unfamiliar. They are already familiar with making high-quality shooting games. They have produced “Bullet Storm”, “Fortnite” and “Gears of War: Trial”. “And other widely acclaimed works.

However, along with the sales of the game, there are bad reviews of the game by Steam players, and only 64% of the positive reviews on Steam. So what exactly is this game? Why are a large number of players giving bad reviews? 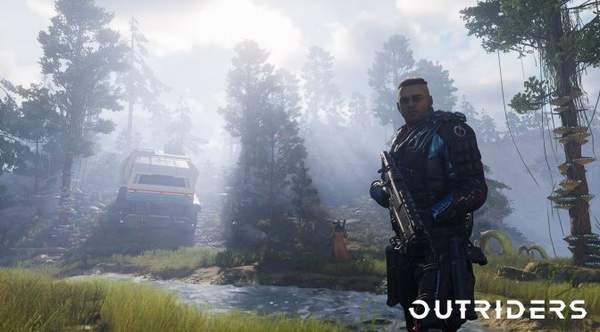 The background of the game is set in a dark and desperate universe. After the hero wakes up and finds that he has abilities, the game is officially started, a bit like the standard web essay routine of “rebirth science fiction wasteland plus abilities”. According to the official description, the main storyline mission of “Outriders” allows players to play for about 40 hours, plus the overall lifespan of various side story games should be about 100 hours, which has reached the length of a 3A game.

Players can experience the plot alone or cooperate with two other players to complete tasks, making the game’s gameplay more flexible and variable. At the same time, players in the squad can also enter and exit the game at any time. In order to ensure the balance of the game in this respect, whenever a player enters or exits the battle, the system will dynamically adjust the number and health of the next wave of enemies. The more players there are, the more enemies will appear. Players said that such an online design is very suitable for playing with roommates. 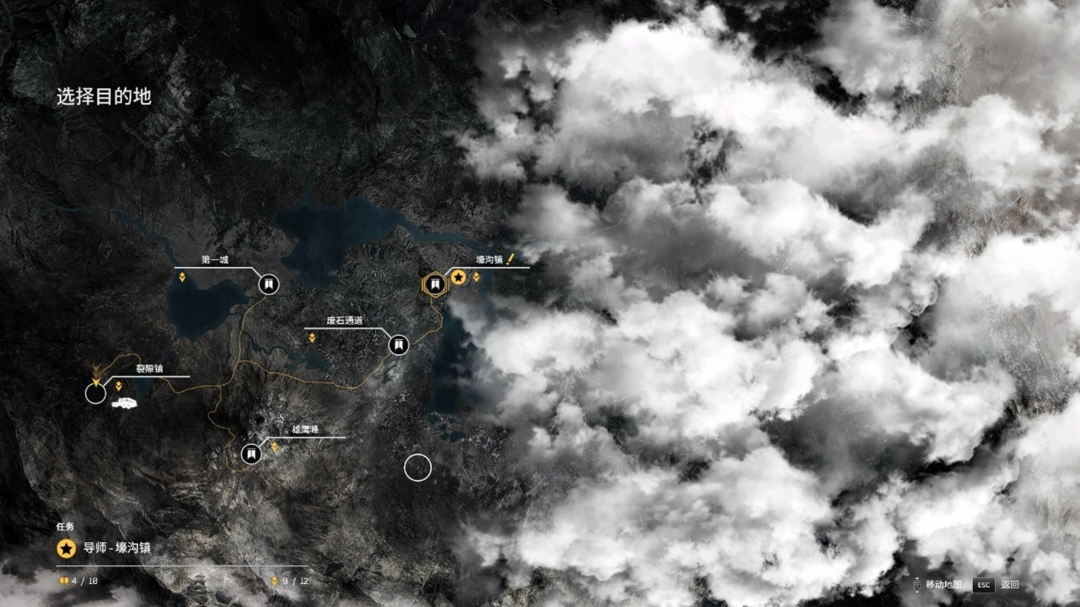 It is worth mentioning that “Outriders Outriders” does not have a complete big map like “The Blockade”, but connects various large, tortuous levels around a central area. For this reason, a vehicle system has been added to the game. Each player or team will have an armored vehicle, which can freely shuttle between the various levels and the central area. 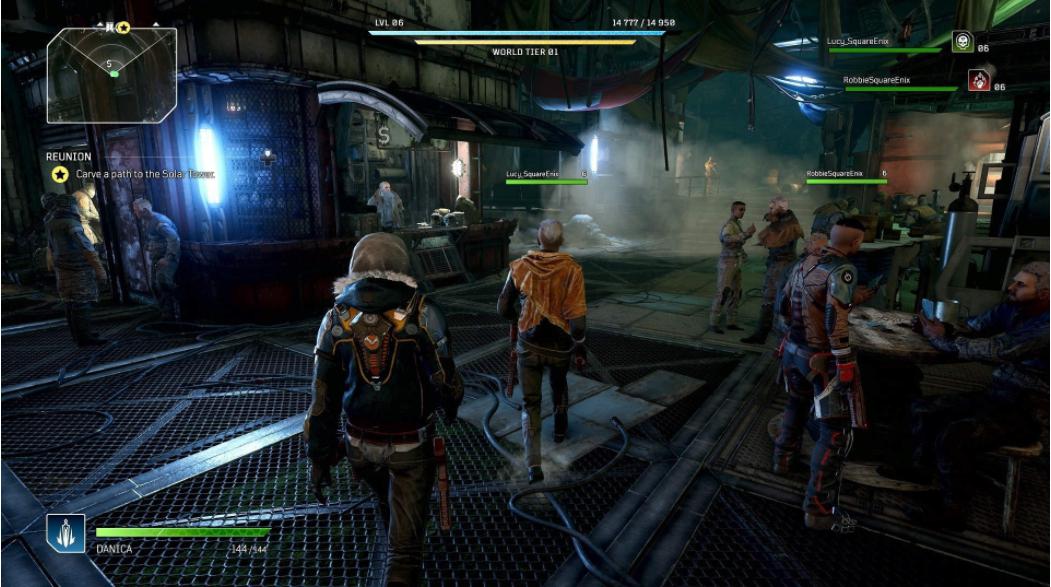 At the same time, the game has a dark and fascinating sci-fi world in the background of the scene design. As players continue to deepen the game, the world around them will become increasingly gloomy. The production team mixed simple and dilapidated man-made buildings, natural scenery, and pure horror in the scene. Through this shuttle trip, the player will lead players through various very unique locations to construct the vast, dangerous and realistic world of “Outriders”. 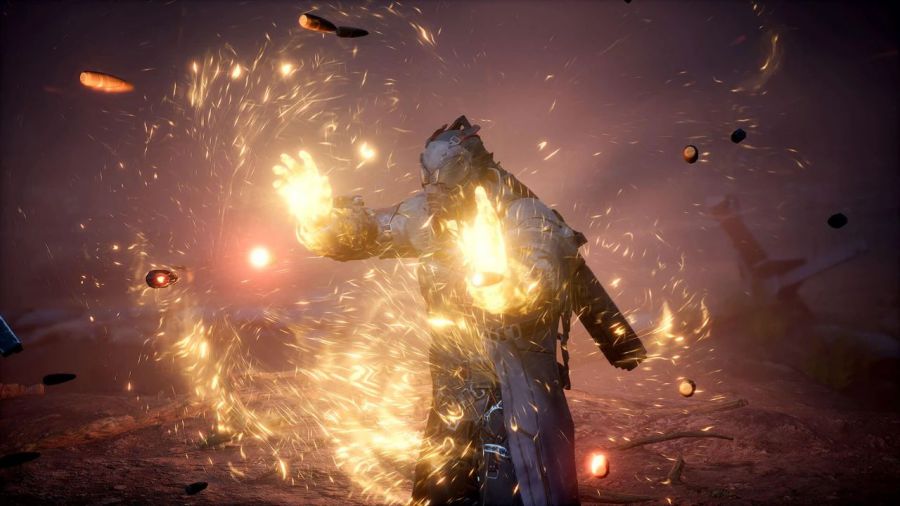 As a production team that insists on using Unreal Engine, it brings superb picture quality to the game, allowing the character to perform well in the release of skills. Especially the particle effects are quite amazing. When the fire mage summons the pillar of fire, it will bring players a visual experience like real flames.

In terms of gameplay, “Pioneer” can be described as a “hybrid”. It not only integrates gunfighting gameplay and combat skills, but also adds role-playing, so that the game has both the refreshing feeling of shooting games and the depth of role-playing games, making the game look more It’s like an ARPG style game.

“Outriders” divides the characters in the game into four occupations according to the differences in skills and weapons, namely, technologist, fire mage, trickster, and saboteur. In the process of teaming up with other players, different occupations will be different. Form a cooperation to help players beat the BOSS better. Each profession also has 3 skill routes (gun output, survival recovery, and skill output). Players can use skill points to unlock various skills on the skill tree to match the unique gameplay of the profession.

Although “Outriders” divides occupations, it does not impose strict restrictions on character positioning. Instead, it gives players a high degree of freedom in body shape, weapons and equipment. For example, the deceiver is based on the assassin profession and has high mobility and damage value. But as long as the player is willing, they can be turned into a meat shield, or they can focus on their time manipulation energy to create a strong support role that controls the field.

From the perspective of the game’s operating settings, the “Outriders” demo video shows that the battle of the game is cool. In the combat system, guns and skills each account for about half of the weight. Players don’t have to spend all their time shooting, and they can also use incredible skills to destroy the enemy. For example, a deceiver can use a sniper rifle to kill the enemy, and at the same time use the skill to become an assassin for close-range killing, making the player’s combat experience richer.

In order to highlight the game’s combat pleasure, the game implements the best defense is the offensive concept. Players can only recover life by attacking blood sucking, killing blood, and hitting blood. At the same time, if the player stays behind the bunker for too long, the enemy It will attack the player from the side and drive the player out of the bunker. This requires the player to move more flexibly and quickly, and keep hacking and shooting to maintain the lifeline. 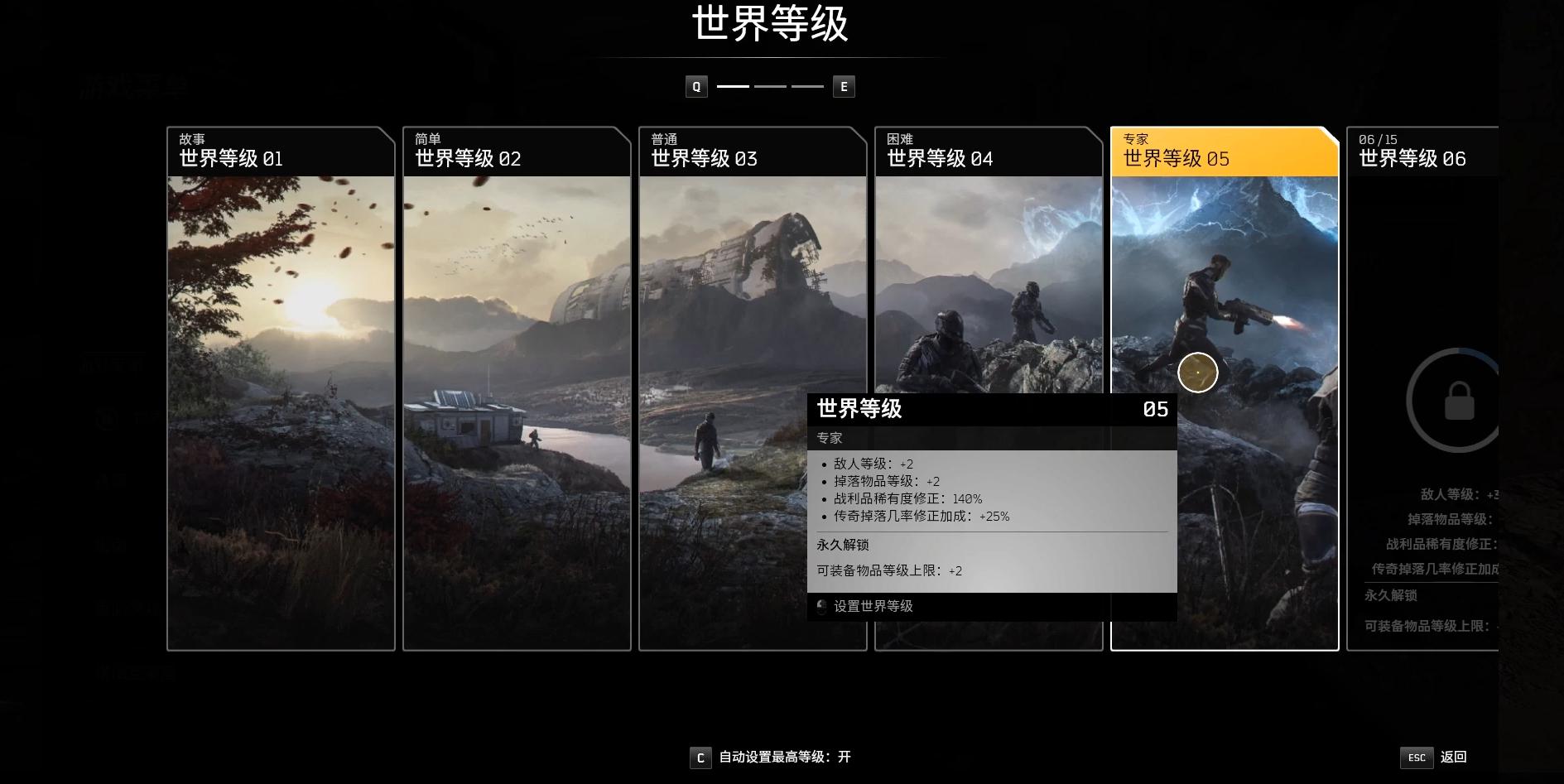 In addition, the world level will adapt to the difficulty of the game as the player progresses to maintain the challenge of the game, but the player can also manually change the world level according to their preferences. The production team stated that this design is to prepare players for a specific world level, but players can only gain new world level experience by playing at the current highest difficulty level, hoping to inspire players to force them to try to move towards Next level, complete the next challenge. 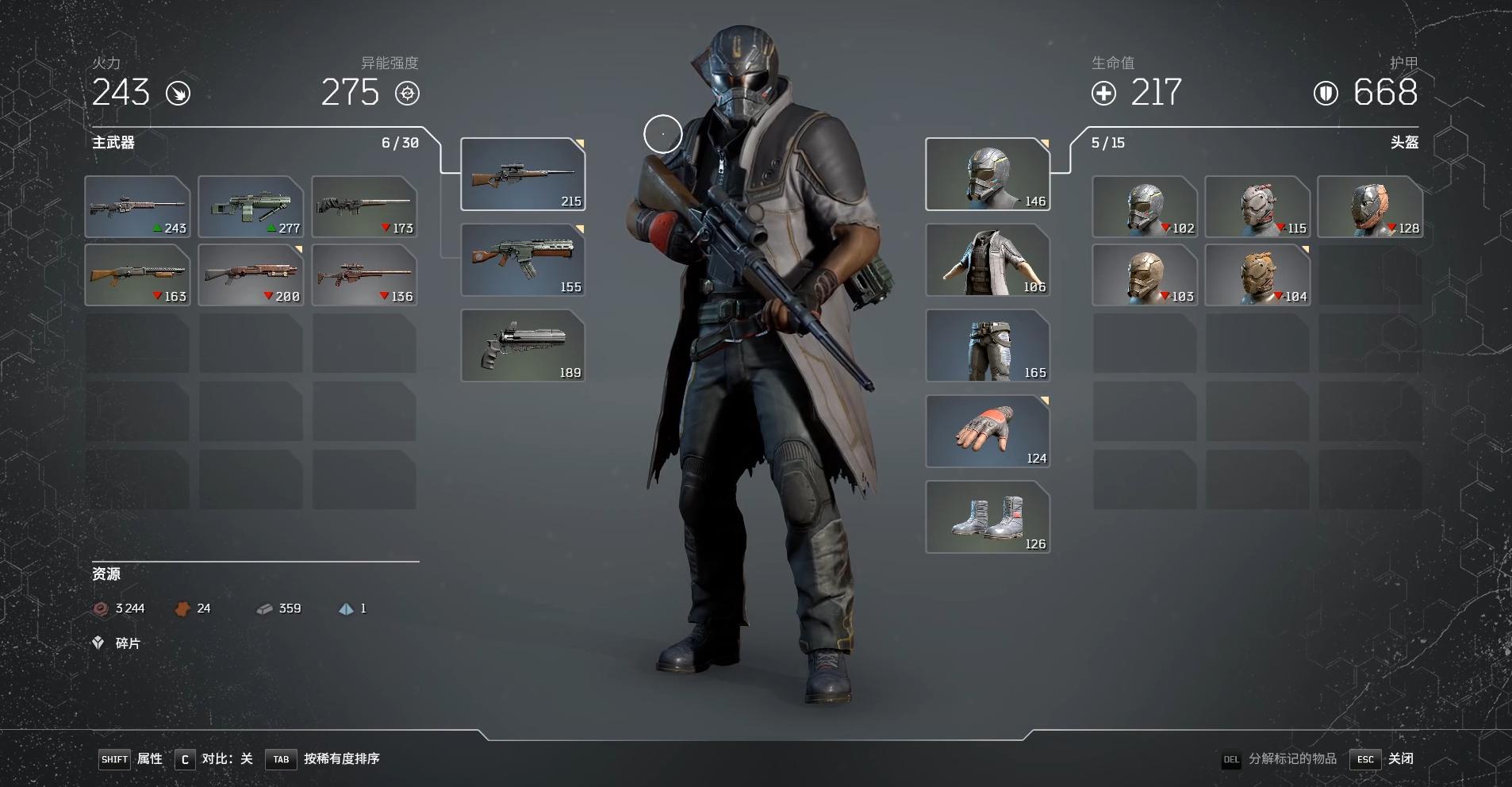 As players upgrade to higher world levels, players will also unlock new loot and resources. In the later stage, it can be used to make new equipment or upgrade equipment and weapon accessories. It can also improve the attributes of the character’s armor, health, firepower, and abilities. According to the developer’s description, the most difficult challenges require powerful character outfits.

In GameLook’s view, while “Outriders” has achieved good sales, the low praise rate of the game is very surprising. From the feedback from players, the problems are mainly concentrated in the following aspects. 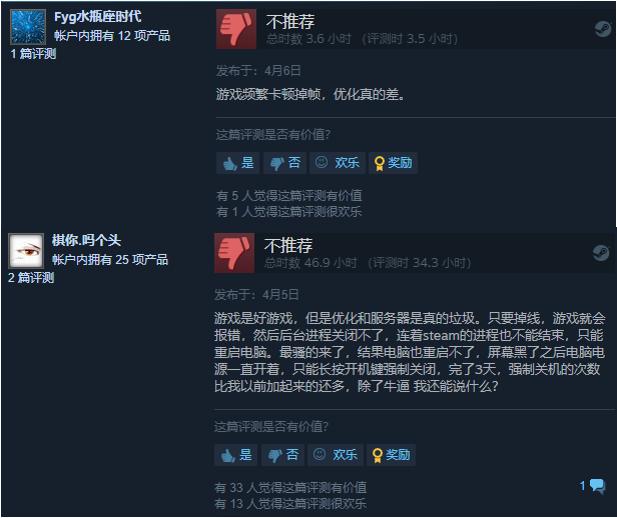 In fact, the game had already encountered similar problems when the trial version was first released. Since the SE mispredicted the enthusiasm of the majority of players, basically everyone had to experience the dilemma of waiting to be online, waiting for matching, and disconnected and waiting again. Fortunately, SE also listened carefully to the feedback from the player community. The first version of the optimization plan was released on March 5, and the first round of optimization patches was launched on March 12.

Regarding the manufacturer’s update speed and the known problems of the game, it stands to reason that such problems will be avoided after the official version of the game is launched. But after the game was officially launched, the server still crashed, causing the number of players to drop from nearly 100,000 to 30,000.

The optimization problem is only one aspect, and the game play is also very controversial. On one side are the players who support it, including a large number of Twitch anchors and YouTube anchors. They praised “Outriders” for providing meaningful loot, fierce battles and satisfactory RPG game progress, while the other side criticized it as boring and stitched. strange.

In addition, the online mode of the game is also a place where players criticize more. Although the game supports single player play, it must be connected to the Internet from time to time, which makes people very uncomfortable. Although the official has fixed this problem, it is still not optimistic.

However, such a large-scale optimization problem immediately attracted the official attention. As the production team worked overtime day and night to solve this problem, the game server finally stabilized and the number of online players also rebounded. Up to now, the maximum number of simultaneous online users of the game has exceeded 120,000. “Outriders” official Twitter even Versailles-style tweeted: “Today the server is…not bad?” Then it said: “Have we reached the highest number of online players so far?” Obviously, the developer PeopleCan Fly also commented on this result. Quite satisfied. 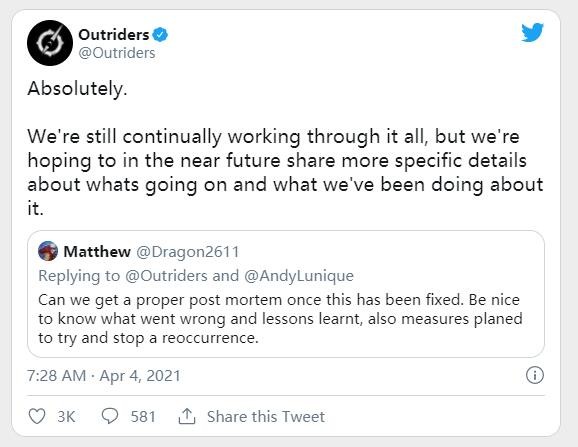 But GameLook found that People Can Fly still have many problems that have not been completely resolved. Players will still have some lag before entering the server, and under the official Twitter, the team has currently provided a solution for players who have joined the game and have been stuck on the “80%” loading progress bar or spinning Logo. This shows that the optimization of the game still has a long way to go.

Objectively speaking, GameLook is more optimistic about the potential of this game. After all, the basic framework and basic gameplay of the game are remarkable, especially the previously officially announced “cheating watermark” has been welcomed by the majority of players. “Outriders” cheaters will display a watermark like “I CHEATED” on the game interface, ID and other places. The system will prohibit online matching with other players, and the cheaters can only match with the cheaters.

In addition, the production team attaches great importance to this game that left Epic for the first time. Its creative director Bartek Kmita said: After several years of cooperation with Epic, we are eager to create our own iconic original IP. This product is aimed at Make it the most ambitious work of the company. Therefore, the production team promised to make a long-term update to the game based on player opinions in the future.