Attack on Titan Season 4 Part 2 is coming. We just watched the first part of the final season of Attack on Titan, and as expected by people who have already read the manga, there will be a split cour. The Official Attack on Titan Twitter has revealed a teaser trailer for Part 2

And the @anime_shingeki Twitter has confirmed that Attack on Titan Season 4 Part 2 will have a release date this winter.

The upcoming Japanese anime winter season will run from December 2021 to March 2022, so Attack on Titan Season 4 Part 2 can start anytime during this time.

However, we hope it will have some history repeating with the first episode of Part 2 – Episode 76 Judgment – airing in December 2021.

In the meantime, however, fans of anime should be very wary of spoilers leading up to the drop of Attack on Titan Season 4 Part 2.

This week, Attack on Titan Chapter 139 was released – the final installment of the manga that began in 2009.

The AoT anime has stayed very close to the manga, so watch out for spoilers making the rounds before the Attack on Titan ending.

When the Attack on Titan manga came to a close, the team that worked on Hajime Isayama’s iconic series wrote a letter to the fans thanking them.

The letter stated: “ This world that only existed in 2009 was translated into words and images, given meaning, turned into a story, printed in the first issue of Bessatsu Shonen Magazine, and for eleven years and seven months by Hajime Isayama’s hands serialized. .

“By no means were they eleven years and seven months of lasting good news. 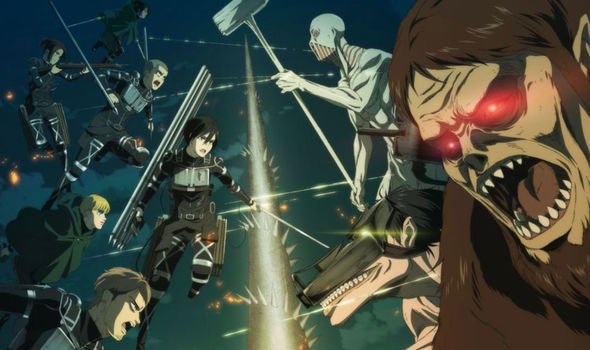 The first part of Attack on Titan season 4 has just aired on Crunchyroll and Funimation (Image: PRODUCTION IG)

It added: “Still, we believe that nothing is more valuable than allowing people to share emotions that cannot be articulated through a story.

“It makes us happy to feel that way with readers and partners through Attack on Titan.

“While this series has come to an end, these memories will certainly warm our hearts. Thanks for reading. Our battle has only just begun!”

Attack on Titan is one of the most popular animes and mangas out there.

When all is said and done, the anime will surely go down as one of the greatest animations of all time – alongside other GOATS like Fullmetal Alchemist and Death Note.

If you want to catch up on Attack on Titan – or start it before Part 2 starts – now is a great time to do so.

Attack on Titan can be streamed in the UK via Crunchyroll or Funimation.