The best and worst UK phone signals have been revealed (Image: GETTY)

EE, Vodafone, O2 and Three customers seem to get a very different experience depending on where they live. The latest 4G and 5G speed stats have just been published by RootMetrics’ network testing team and it reveals some huge differences between some of the UK’s biggest cities.

As more of us use our phones to watch online content, make video calls and send endless WhatsApp messages, good data speed is essential now, but not everyone gets the same experience.

Of the 16 areas tested, Liverpool came out on top with a total speed of 43.6 Mbps – at that speed you could download a blockbuster HD movie in about 14 minutes. According to RootMetrics, Vodafone clocked the highest average download speed in Liverpool at 73.5 Mbps, while EE took the credit in Birmingham at 79.5 Mbps.

However, think about those who live in Leeds and Bradford as they only reach an average speed of 22 Mbps – downloading the same movie would take over 20 minutes. Sheffield and Newcastle also scored lower results, with customers in these areas reaching an average speed of around 26 Mbps.

Surprisingly, London didn’t fare as well as some might expect, with the capital coming 6th in the ranking at 33.3Mbps. While some areas aren’t getting the best downloads right now, things could improve a lot in the future as more places get the latest 5G technology. 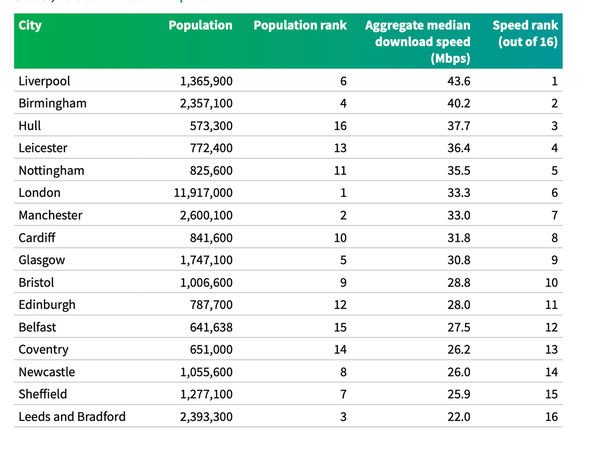 How the UK compares (Image: ROOTMETRICS)

As RootMetrics explains, 5G speeds in both Liverpool and Birmingham are currently at the forefront with only one operator in both markets publishing a median download speed of 5G below 112Mbps – that’s nearly double what most people experience on their fixed broadband.

“It is also likely that we will see greater speed parity in UK cities in the future, especially as we reach a point of ubiquity of 5G in the coming years.”

HERE’S HOW THE CITIES COMPARE IN THE UK