In the 90s, video games were very different from today. While some genres evolved with the advent of the 3D era, others faded a bit into obscurity for no other reason than the fact that developers failed to adapt the formula of these genres to the new gaming generation without taking away what she made. very special. Among these genres that didn’t make the leap are the adventure platform puzzle games along the lines of classics like Another World and Flashback, both heavily inspired by the original Prince of Persia. Oddworld: Abe’s Odyssey and Oddworld: Abe’s Exoddus, released in the late 90’s, were in many ways the natural continuation of the genre, retaining what made these games great and with new mechanics.

Oddworld: Soulstorm, the new entry in the series, could mark the rebirth of this almost forgotten genre. Rethinking the second entry in the Oddworld series not only looks great, but it plays great despite some minor issues here and there, so it certainly has the potential to bring a new generation of fans who will never see the had a chance to experience the classics. .

Oddworld: Soulstorm picks up exactly where Oddworld: Abe’s Odyssey and its remake New ‘n’ Tasty ended. After rescuing 300 Mudokons from the RuptureFarms meat grinders, Abe is now entangled in a revolution he unwittingly started, confronting the slaves of Glukkons. Meanwhile, the Glukkons have created an addictive potion called Soulstorm Brew, designed to keep the poor Mudokons docile and enslaved, making Abe’s job even more difficult.

While Abe and his fellow Mudokons can be quite funny, with their weird looks and antics, their story takes some dark turns at times. While this is not exactly unexpected, given that slavery is one of the main themes of the game, it can still hit surprisingly hard. The storytelling style used to tell this story is also perfect, combining great cinematic sequences and more intimate moments seamlessly integrated into the gameplay. When a fairly large story development is hidden in a seemingly unremarkable discovery, you know you are experiencing something big. 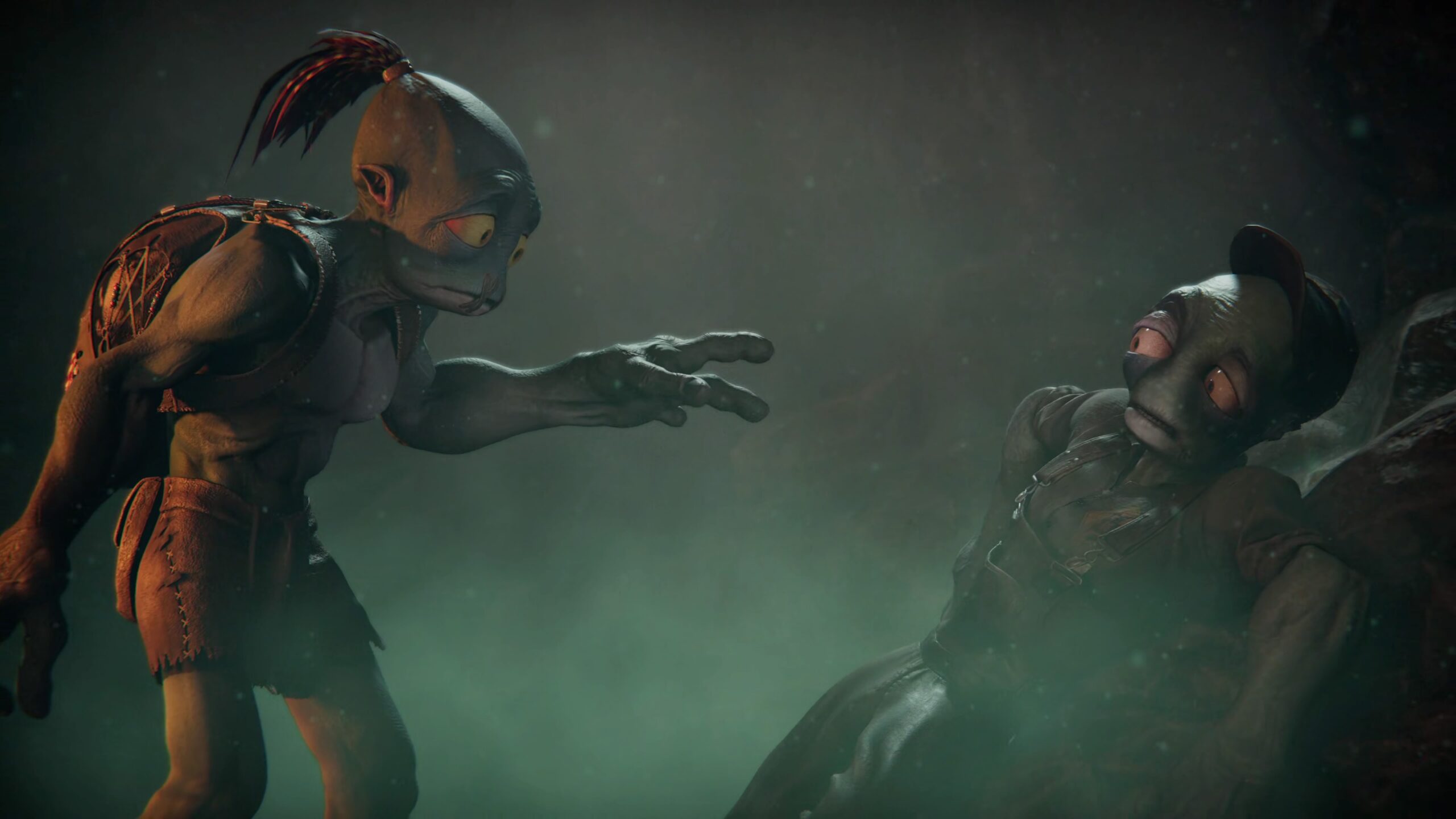 While the story in Oddworld: Soulstorm is absolutely fine, it’s the gameplay that shines the most, despite a few issues here and there.

Oddworld: Soulstorm doesn’t play all that different from the original Abe’s Odyssey and Abe’s Exoddus. While controlling Abe, players will have to go through more than 10 different stages filled with enemies, traps, puzzles and Mudokons to rescue. The roots of the series’ adventure platforming puzzle are in full force in Soulstorm, as Abe has nearly nonexistent offensive options, so players will have to navigate danger by jumping platforms and using every resource at their disposal, including a variety of items that also serve as ingredients for crafting, one of the biggest mechanical changes introduced in this new design.

While the platform puzzle experience hasn’t changed much, it feels better than ever in Oddworld: Soulstorm. The introduction of a double jump has made navigating the stages much smoother, avoiding tons of missed jumps and unwarranted deaths. The minor tweaks to Abe’s movement are more welcome than they might seem, as the game is actually quite challenging and frustration is always behind the corner.

Oddworld Inhabitants was certainly aware of the game’s high challenge level as it included tons of checkpoints throughout the stages to avoid losing too much progress in death. But it is with the checkpoint system that some of the game issues come up as they happen to record the exact moment when they are triggered, so if an enemy is following you or there is a danger of Abe threatening you, you run the risk get stuck in a death loop that can force you to start over from the beginning. It honestly rarely happens, but it does happen: I triggered one of the checkpoints when I accidentally threw an item, and every time I respawn I lost this item. 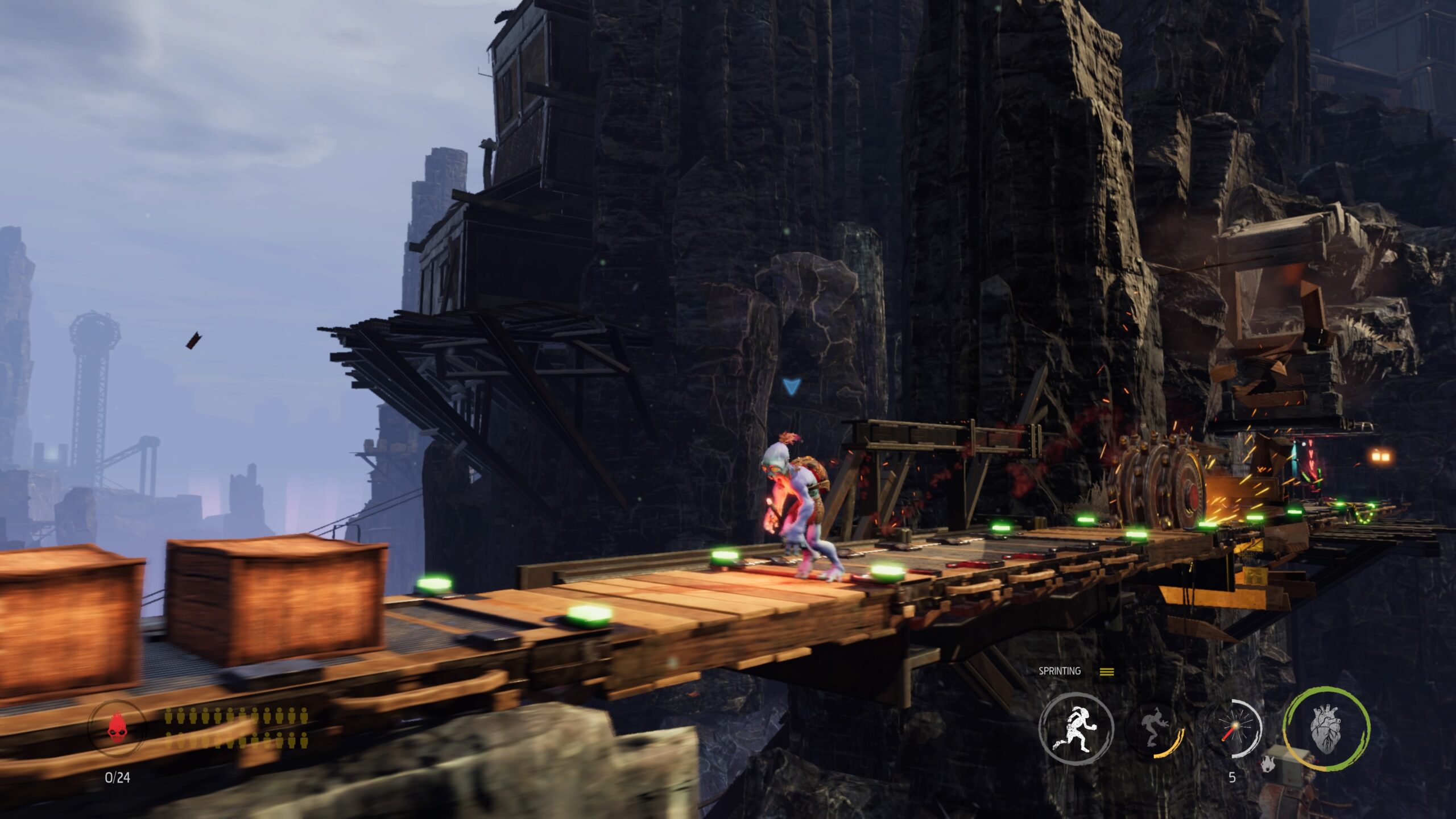 Such a checkpoint system was necessary not only because of the game’s high level of challenge, but also because of the sheer size of the 17 stages: it can take more than an hour to complete the largest for the first time, and that’s without all its secrets and save all Mudokons. This is hardly a problem, quite the contrary, as it is clear from the outset that great care has been taken in the complex level design, which includes puzzles that are all very varied, and enemy encounters that can be won in different ways. As mentioned earlier, Abe’s attacking options are quite limited, and the only way he must actually kill the Sligs is by owning them through the Chant ability. However, this ability cannot always be used, so you may have to resort to items to take down enemies in certain sequences or simply slip past them unnoticed. It is during these stealth sequences that the game’s excellent design really shines as there are multiple feasible and satisfying ways to complete stealth sequences.

Playing the game covertly and avoiding as many Sligs as possible also has to do with one of the gameplay mechanics of Oddworld: Soulstorm, the Quarma system. This system keeps track of how Abe behaved during stages, such as how many Mudokons were rescued, how many died, and how many Sligs were killed. Achieving a positive Quarma in all stages is extremely important, as the last two stages and the true end of the game are not unlocked until it is reached in all previous stages. Even with positive Quarma achieved for all stages, players have plenty of reasons to return to completed stages as an in-game achievement system keeps track of optional goals such as the total number of trash cans looted, secret areas discovered, total Mudokons saved, and so on. 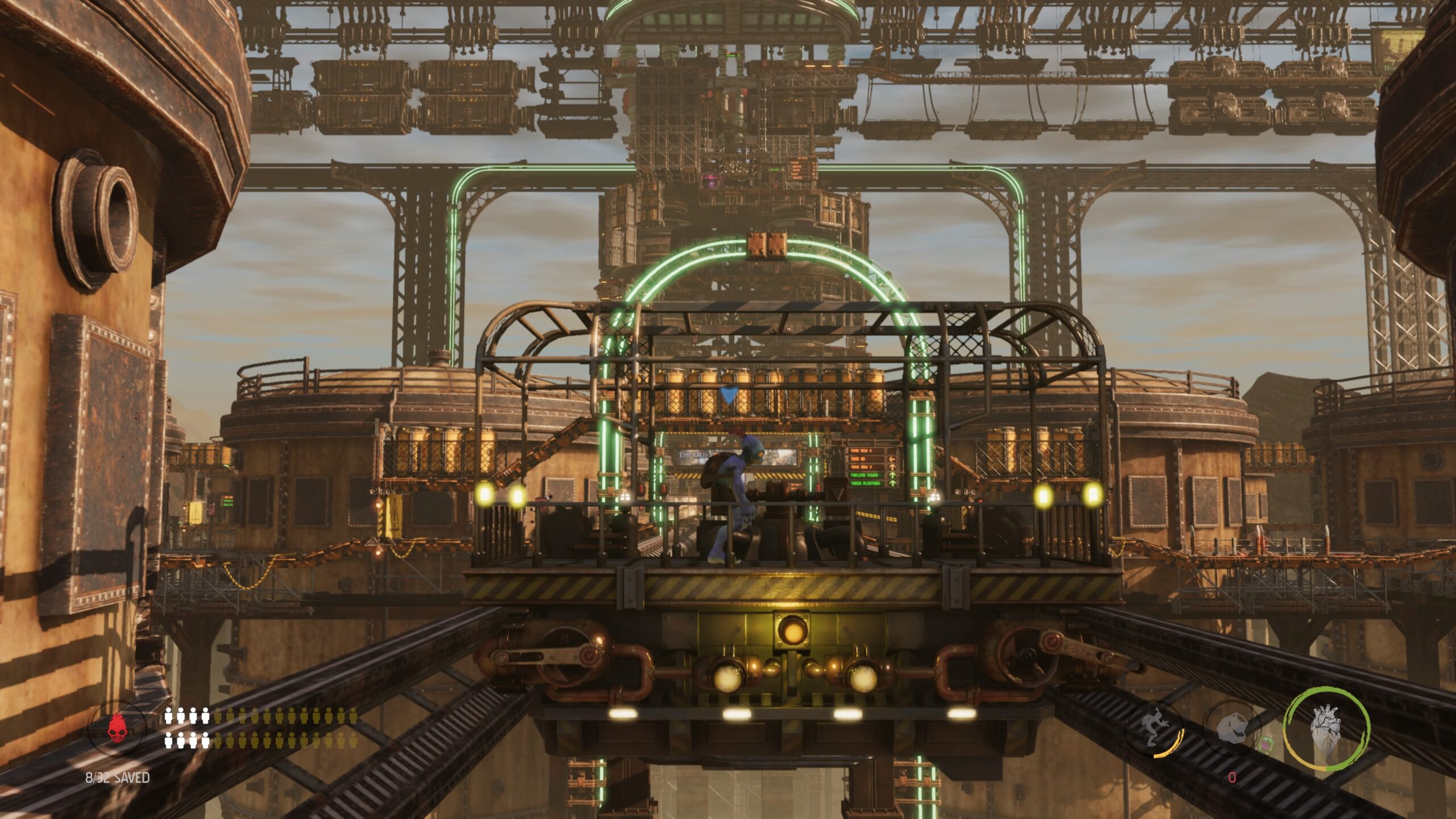 Another area where Oddworld: Soulstorm really shines is in presentation. All locations look great, transition seamlessly from wilderness to industrialized areas, so much so that they feel almost natural. This is also thanks to the great camerawork used in the game, which highlights all the twists and turns of each location in a very cinematic way without taking control from the player. The same amount of care has gone into character models, all of which look extremely personal, detailed, and hard to forget. Performance is also solid on PlayStation 5, with smooth 60 frames per second with little to no drops, outside of areas where the frame rate drops to 30 for no real reason. This is likely a bug that will be fixed with future updates.

The PlayStation 5 version of the game also supports the DualSense Haptic Feedback and Adaptive Triggers. Haptic Feedback is used to simulate Abe’s walking, locker and bin search, gunfire, and so on, while Adaptive Triggers are only used to trigger the Chant ability. Not the best implementation of these features, to be fair, but they’re still a bit new and no game outside of Astro’s Playroom has made them feel essential to the experience so far.

Even with its problems, Oddworld: Soulstorm is without a doubt one of the best games released this year. Despite some craziness in the checkpoint system, a few bugs, and a difficulty that may be too high for some, there’s no denying that the long wait has been worth it as the game is clearly a product of love that all fans of the series and 2D platform games in general.

Adding that the game is included with the PlayStation Plus subscription on the console, there’s really no reason to skip it.

With an excellent stage and puzzle design, an engaging story that takes some unexpectedly dark twists, and a great presentation, Oddworld: Soulstorm is just as good as the first entries in the series, if not even better thanks to some new gameplay mechanics. The high challenge level and some other issues here and there may deter some players, but don’t let them stop you, even if you only have a passing interest in the series or the genre as a whole: a game like Oddworld: Soulstorm has not been around for a long time. released more.