Outriders Crafting – How to tweak weapons and armor on Enoch

When you first start Outriders – or rather when you first acquire your skills and see Enoch behind the almost idyllic clearing you first arrived – use rusted weapons and ragged armor. Rift Town is embedded in a thirty-year war, and they don’t have any quality supplies to hand out, even newly awakened superheroes.

As you progress through the game you will find rarer and higher quality gear that may have additional perks and mods to increase your chances of survival. These will appear sparsely at first, but by the time you reach the first city, you’ll likely have collected a few.

How Crafting Works in Outriders

When you first go to Zahedi and open the crafting menu, you will see several options on the right side of the screen. Improve rarity, increase attributes, mod gear, trade variant and level up. Outriders don’t explain what each of these means until you start experimenting with them, and even then, you still feel a little bit in the dark.

Each affects your equipment differently, so we’ve broken down exactly what each means below. To do anything with your equipment, you first need resources, of which iron and leather are the most basic. Iron can be collected from metal deposits that glow in the game world. Leather can be retrieved from the defeated wildlife of Enoch. You can also get iron by dismantling weapons and leather by dismantling armor.

Titanium, a higher-level resource used to level up and improve the rarity of your gear, is mainly mined from dismantling epic or legendary gear, but you can sometimes find it by defeating elites .

Shards, the last resource you can collect, can only be found by taking apart your old weapons, so make sure to do it regularly and not just sell it to the merchants. 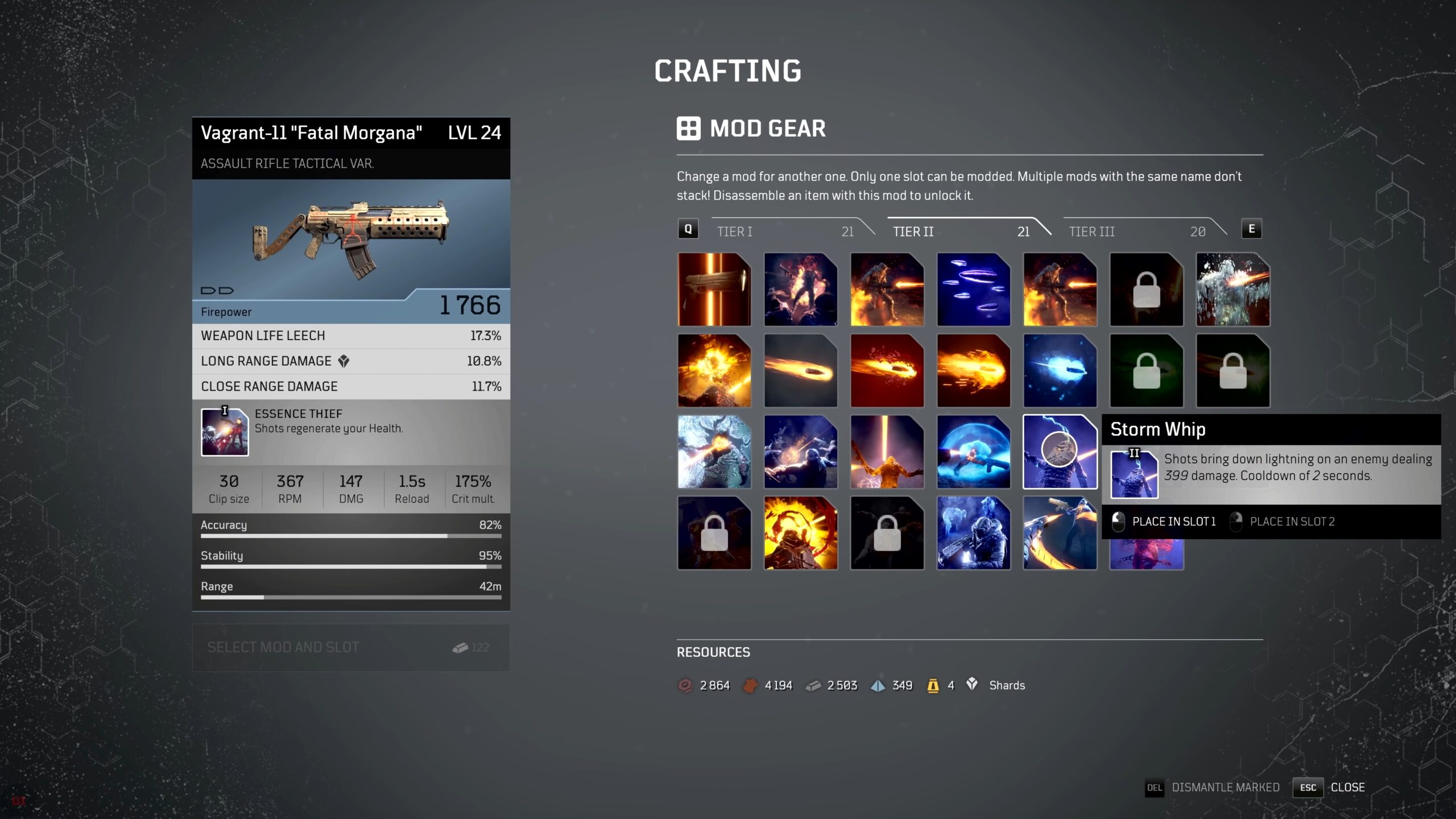 To put it as simply as possible, improving rarity increases the color rarity of the item in question. The most basic items (white) cannot be improved this way, but you don’t want to waste resources anyway. Green turns blue (rare) and blue turns purple (epic). Epic and Legendary weapons cannot be upgraded in rarity.

However, improving the rarity does more than just change the background color. It also improves the primary metric for the item. This will be its firepower for a weapon, and for armor it is strangely armor.

In addition, improving the rarity will also add more mod slots to the item. You will also be offered three random mods to fill the slot, but you can always replace them in the Mod Gear menu. Improving the rarity of an item takes leather for armor and iron for weapons, as well as some titanium as you level up.

The attributes of your items are the random bonuses you get, which you can see below the item’s image. Each attribute has six possible upgrades available for you to map in the menu. You will also see how much the upgrade will increase the attributes.

Upgrading these attributes requires specific shards, which are collected by dismantling items with the same attributes. You also get back some of the spent shards if and when you dismantle an item that you have increased its attributes.

This is probably the most used menu in Outriders Crafting options. Blue rarity items and above have at least one mod slot, which provides an added bonus or effect when you equip the item in question. These can vary wildly, and the armor sets even have unique mods that can be used.

But if you don’t like the selection you currently have, you can replace them in the Mod Gear menu. It takes leather for armor and iron for weapons to replace a mod.

You collect mods by disassembling items to which mods are attached. If you are taking a mod apart for the first time, you can add it to as many items as you want in the future. That makes it very worthwhile to disassemble items you don’t use with good mods so that you can use them in the future. Just remember that mod effects don’t stack, so there’s no point in equipping the same on two different items on your character.

Perhaps the most confusing title in Outriders design options is the variant variation. However, it is actually very simple.

As you may have noticed, some weapons have different firing styles than others. Some attacks and submachine guns fire in burst rounds, while others are fully automatic. Some shotguns have only three grenades before reloading, and others have six and so on. What you may not have noticed is that these are dictated by the variant and can be changed in this menu.

So if you find yourself using a burst fire weapon when you really want to remove your entire clip at once, use the toggle option to do the trick. It takes some iron, but it can really help you find the most optimal weapon for your playing style.

The very last option in Outriders design menus is to level up your item. Similar to improving the item’s rarity, this will upgrade the item’s firepower or armor every time you do it. However, it is clear that it does not change the rarity itself.

Instead, it increases the level of the item. You cannot improve the item’s level beyond your own level, and each upgrade costs leather or iron and titanium after a certain level. Leveling the weapon also reassigns the strength of the attributes associated with the item. This won’t always work for the better, so it becomes a gamble if the numbers are already good in that regard.

However, the level of an item determines how many attribute bonuses it gets, so sometimes upgrading an item will add a new attribute to it and recollect the valuables that are already there.