Be warned about Xbox Gold subscribers: this is your last chance to download two of your free games.

The Xbox Games with Gold lineup will soon be renewed for April 2021 as new games are added.

Available April 16, subscribers can download and play Truck Racing Championship on Xbox One and Hard Corps: Uprising on Xbox 360.

While certainly not the strongest lineup of free games, Hard Corps: Uprising is the best of the bunch for the month of April.

The Contra spin-off has the same classic run and gun action as the original, albeit with one or two new features.

“Write your own legend in the grueling trenches of Arcade mode or upgrade and build your soldier in Rising mode, where only the best of the best can survive and achieve ultimate victory.”

Hard Corps: Uprising will be joined by Truck Racing Championship, which has a score of 73% on Metacritic.

The game also features 14 different tracks from around the world. as well as multiple different game modes.

“Get behind the gigantic 5 ton, 1,000 hp semi-trucks in a completely new racing experience,” read the official description.

“With all the unique challenges of the European Truck Racing Championship, you will control 45 different vehicles in 14 worldwide circuits. Consider truck weight when cornering, monitor tire wear and find the best tactics to win the race.” 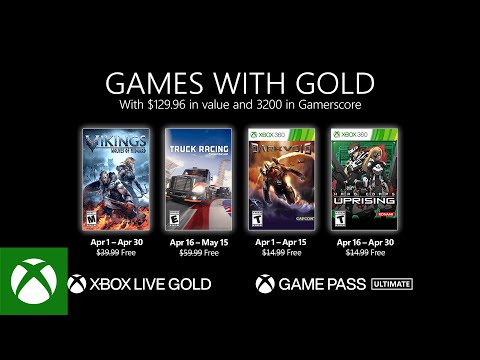 The new Games with Gold lineup will replace the current lineup of free games, including Dark Void and Vicious Attack Llama Apocalypse.

You can read more about Dark Void and Vicious Attack Llama Apocalypse below. And don’t forget to download the games before they disappear.

Vicious Attack Llama Apocalypse: Get your thumbs ready for a frantic top-down, couch co-op, twin-stick shooter like no other. Remotely control an endless supply of mechs to battle through the massive llama horde apocalypse. With 1-4 player co-op, a huge, evolving city to explore, and Xbox Play Anywhere functionality, including on your PC, take out the Llamanati and pray that Llamazon will bless you! “