The new Apex Legends update will be available on PS5, PS4, Xbox Series X, Xbox One, PC and Nintendo Switch.

Season 9 has a release date of 6:00 p.m. BST, although downloading the update could potentially extend the time.

Fortunately, PlayStation users can pre-load the update ahead of schedule. Download it now and you can jump right in.

PlayStation Legends! Be ready to dive into the Apex Legends Legacy update as soon as it goes live by preloading now.

“While the game should automatically download the update, you can give it a boost by manually searching for the update. See you tomorrow!”

As you can see from the patch notes below, the new Legacy update includes many different bug fixes and gameplay tweaks.

You can check out the rest of the Apex Legends Season 9 Legacy update patch notes below.

• Low profile no longer exists! This property has been removed from Wraith, Lifeline and Wattson.

• Combat Revive: no longer places a shield. Can now revive two players at once. Can now cancel active re-withdrawals so your teammate can defend themselves with their knockdown shield.

• DOC Heal Drone: Healing speed increased from 5 hp per second to 8 hp per second. The implementation time before healing begins has been reduced by approximately 33%.

• Care package: Cooldown shortened from 6 minutes to 5 minutes. Guaranteed now an upgrade (if possible) in three categories: Body Shield, Other Equipment (Helmet, Backpack and Knockdown Shield) and Weapon Mount, based on your team’s current equipment when the pack arrives.

• Stimulation: Reduced cooling between stims from 4s to 1s. Increased health costs from 12 hp to 20 hp.

• Increased bullet spread in the air and firing from the low launch pad trajectory.

• Burglars Best Friend: Can now run and slide at full speed while aiming the bracelet and the bracelet in the air. Loba will no longer be delayed after translocation.

• Fixed many bugs that caused bracelet throwing to fail.

• Gravity Lift: reduced lifting speed by 30%. Less acceleration from left to right. Limit the time you can sit at the top of the Gravity Lift to 2 seconds. Cooldown period increased from 15 s to 20 s.

• No longer receiving assistance from Eye of the Allfather.

• Can no longer use his drone to “hijack” a respawn beacon that is already in use. 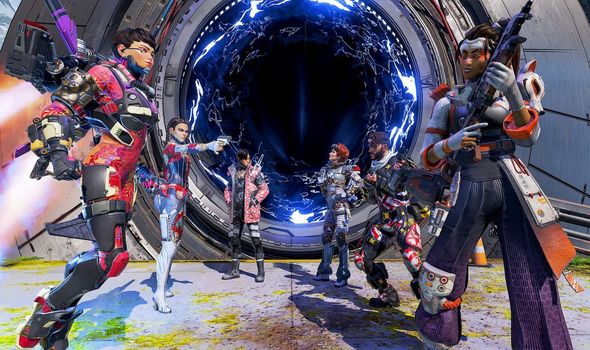 • Shatter Caps – Fire selection to switch between standard mode and shatter mode. In shatter mode, the rounds split into an explosion pattern when fired. This hop-up is suitable for the 30-30 Repeater and the Bocek.

• Deadeye’s Tempo – Firing at the perfect moment increases the rate of fire. It can currently be attached to the Sentinel and the Bocek.

• To make room, the Hammerpoint and Skullpiercer hop-ups will be domed for now and will not be available.

• Decreased the headshot multiplier for all assault rifles from 2.0 to 1.75

• It comes standard with the Precision Choke, which can be turned off

• The re-room time has been increased from 0.9 seconds to 1.1 seconds

• As a crate weapon, it comes with a clip for 9 ammo and 63 spare ammunition

• Time to full charge shortened from 1.1 seconds to 1 second

• Increased dispersion in the air and aimed at visor

• Increased controllability of recoil in the beginning of the pattern

• Decreased controllability of recoil in the beginning of the pattern

• Increased warehouse capacity from 4 to 6

• Moves the bottom 2 pellets inward in the blast pattern

• Aim and move slowly away from the original stick.

• Badges are now sorted by category and can be filtered by “all” or “unlocked only”. This suggestion came directly from players. Thank you! It’s so much better!

• When looting coffins, players can now see health bars for everyone on the team.

• Challenges can now be made ‘Favorite’ by going to the Challenges menu and right-clicking on a challenge. That challenge will then be added to a new favorites tab that will appear in the lobby and on the match map screen.

• Pressing and holding F2 during the game will bring up the skill description page for your character. This is only available on PC.

• Players can now request better equipment by going to their inventory and pinging a piece of equipment.

• Your first Challenge Reroll of the day is now free.

• By rearranging your challenges, you can choose from BR-focused challenges or Arenas-focused.

• Holo Sprays, Quips and Emotes can be selected as favorites. These are used when the player is asked to run any emote.

• Club Invitations v2: You can now record what you want to play when you send a party invitation to your clubmates via the Club tab. From the member list, select as many club members as you want to send the invitation at once.

• Ranked: Fixed edge cases where an abandonment penalty would be applied incorrectly due to server errors.

• Flight Path Adjustments: Removing flight paths at the edge of the ship to avoid matches where large areas of the map receive little to no traffic. These screenshots show a before / after comparison of possible flight routes on Kings Canyon.

• We are continuing to work on the Fight Night update to improve the match pace towards the end of the game. We are slowing down the closing speed of the late game Rings so you have more time to fight and maneuver your way into the Ring. We are also shortening the “waiting time” before rings 4 and 6 start to close.

• Fixed an issue where the Tactical UI was not displayed in Bloodhound’s Ultimate.

• Gas traps and inflatables will no longer float in mid-air when placed next to a zip line.

• Decoys no longer die after a sign of thermite damage.

• Regulations no longer get stuck and disappear when bounced off the inflatables.

• Death totems will no longer bounce if a bouncy castle is placed underneath.

• Players no longer have drawn weapons if they are hit when entering the Fight Night ring via a Jump Pad.

• Updated Octane’s Helicopter emote to properly remove his leg for which he uses it to perform the mentioned helicopter flights.

• Fixed the “Extend” prompt for Watson’s gates not appearing in certain situations.

• If you jump on a damaged Shiela, the flame effect will no longer be transferred to your weapon.

• Players no longer have drawn weapons if they are struck when entering the fighting night ring via a gravity lift.

• Fixed an issue where NEWT would not get a refund if it died instantly due to a bad spot.

• Part of the iron visor was displayed all over the weapon.

• Fixed a graphics issue when switching to Sentinel.

• Fixed a menu issue where advanced look options were hidden.

• Investigation beacons now appear on the map when teammates respawn.

Returns will be updated today – Turn off automatic updates