World of Warcraft The Burning Crusade Classic is the next old-school expansion coming to the popular MMORPG.

Announced at this year’s BlizzCon event, the add-on was previously listed as “coming soon.”

However, based on leaked material posted on Reddit (see the screenshot below), the DLC has been given a June 1 release date on PC.

While Blizzard isn’t yet to make an official announcement, the release date teaser looks like a pretty concrete leak.

If true and the expansion is slated to launch on June 1, expect Blizzard to make it official soon.

Originally launched in 2007, The Burning Crusade is the first of eight World of Wacraft expansions on PC.

A classic version has been on the map since early 2020, when Blizzard asked fans if they were interested in revisiting the content.

The plot revolves around the opening of the Dark Portal to Outland, where the Burning Legion reigns. 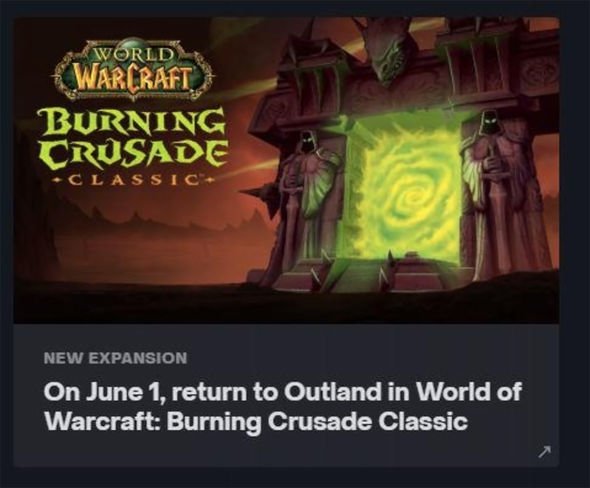 “You have taken Azeroth by storm. Now a dark frontier awaits you beyond the Dark Portal. Return to a lost era of Azeroth and enjoy the timeless stories that defined this world at war,” reads the official description.

Enter the Twisting Nether and explore Outland – the shattered remains of the once beautiful orc homeworld of Draenor. Fight to level 70, ride majestic flying mounts and master two additional races: the mystical blood elves and the devout draenei.

“With the release of Burning Crusade Classic, new realm types will be added to WoW Classic. If you already have characters on WoW Classic, you will need to choose which path your characters will take.

Fans can access World of Wacraft Classic and the upcoming Burning Crusade expansion by purchasing a subscription from the Blizzard website.

By purchasing the six-month subscription, players will gain access to the Lucky Yun Mount, which is worth £ 19.

Are you trying to turn fortune in your favor? You are lucky! The panda elders claim that Lucky Yun will bestow prosperity on anyone who touches his glittering skin.

“Grab this ox by the horns and prepare for your happiness in Azeroth and beyond.”