Warzone players can download a new update today, with Raven Software releasing the latest patch for the free-to-play Call of Duty shooter. The latest Warzone update was released on Friday, May 7, and brings with it map exploitation fixes, weapon balance updates, and more. Today’s Warzone update started rolling out around 4pm BST for PlayStation and Xbox consoles and PCs.

“Season three comments have been updated.”

The account then added, “Included in the May 7 #Warzone Patch Notes – General changes to loot and bug fixes to map exploits and more.

The wide availability of the Streetsweeper created a dynamic in which passive play was stimulated and rewarded. We don’t think this kind of game is particularly appealing to either side if early game players don’t have the necessary tools to counter it effectively.

Fixed additional map locations in Verdansk that would allow players to get out of reachable areas. This is in addition to the locations we tackled last week.

Fixed a bug that caused Player models to initially load as low resolution at the start of a BR match.

Fixed a bug with the Cold War AK-47, FARA 83, XM4 and RPD where their ADS movement speed and firing movement speeds were decreased with the Tactical and SAS Combat / Spetsnaz stock instead of increased.

We’d like to introduce the following weapon changes by giving you some insight into our thinking process.

There are millions of you, and when we reduce the effectiveness of a weapon, we will no doubt make a change to someone’s weapon of choice. As players of this game themselves, it hurts us just as much. However, we remain torn. We are the administrators of this game – we make it for you. In the same light, we are charged with maintaining the health and integrity of the game. In some cases, this will require us to reduce the effectiveness of some universally held weapons. When we make such a change, our intention is to promote diversity. We believe that what makes a game really exciting is the choice. If we narrow that choice, we take away the freedom of choice to play the game your way. This can happen when a weapon becomes so effective that simply not using it is at a disadvantage.

With that being said, we feel like we are close to ‘balanced homeostasis’ where most options are at least feasible. That leaves us to address Time to Kill. The following balance changes are part of our ongoing effort to increase TTK or at least the individual skill needed to reach extreme. We ask that you do not view these changes as targeted attacks, but rather as part of a larger initiative to raise the skill ceiling.

We want to give you the runway and platform to show us your epic plays and proudest moments. We hope that journey of mastery brings you as much pleasure as we do.

The Season Three Notes have been updated (see ** May 7 – Update): https://t.co/IeZQAgkEqI

Screenshots in the thread below.

Minimum damage reduced from 32 to 31 (Warzone only)

With a large damage profile, location multipliers and manageable recoil, the CR-56 AMAX was able to reliably reach extreme TTKs at long range. This change reduces the TTK with the fastest minimum damage by approximately 17% and the TTK with the slowest minimum damage with an extra shot. However, its fastest maximum damage TTK remains intact – which is a risk that we believe is equal to the reward, given its relentless rate of fire and how many other weapons it has to fight with in the middle battle room. The CR-56 AMAX is just a little more dominant than we’d like and with this change our goal is to expand the selection of viable long-range rifles.

Headshot Multiplier changed from 1.5 to 1.35

Coupled with a mobility-based stock, the FARA 83 was able to achieve extraordinarily high ADS firing speeds. We love how the FARA 83 plays, but it’s a bit too versatile at the moment. As part of our efforts to increase total kill time, we’re reducing the FARA 83’s fastest TTK by 16.6% to offset the generous rate of fire and recoil control.

While shotguns tend to have limited viability outside of the early game, we find the Streetsweeper to be a bit too effective given its rate of fire and ammo capacity compared to other weapons in its class. This change will slightly narrow the deadly range, punish inaccurate sustained fire, and give a little more time to react.

The maximum damage has dropped from 34 to 32

Sprint Out speed increased by 13%

The Bullfrog’s exceptional headshot multiplier has made it possible to achieve one of the fastest TTKs in the game. While this change doesn’t directly affect that multiplier, it does reduce the output. This change reduces the Bullfrog’s ability to consistently achieve extreme TTKs, without completely removing them. We found it too easy to consistently return the TTK to these ranges, so we’re asking for some more accuracy in exchange for the Bullfrog’s attractive stat line. We hesitate to call this an outright ‘grain’ because we believe that a weapon has more value than the damage alone.

We want to push SMGs in different and interesting directions to distinguish them from each other. Ideally, we offer a large number of options within each weapon category that complement a wide variety of playstyles. In that vein, we’re going to push the identity of the PPSh-41 in a way that continues to set it apart from its competition in meaningful ways. For us, the PPSh-41 is the fast-fire, high-capacity, short to medium range SMG. Not every weapon needs to have the highest TTK potential, but every weapon should at least feel viable and have a niche where it excels given a complementary playstyle. 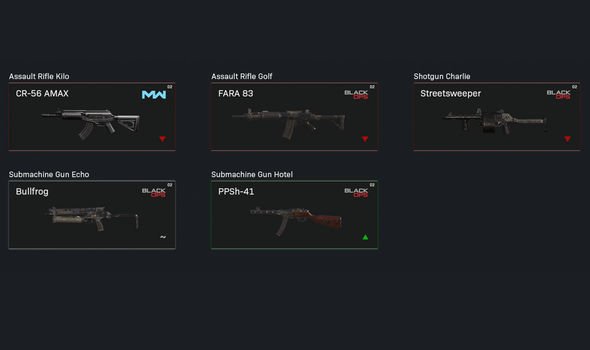 Call of Duty update for Warzone May 7 brings tweaks and fixes to weapons (Image: ACTIVISION)

As we continue to assess the location of Cold War snipers in Warzone, we realize that there is still a lot of work to be done. In addition to improving the overall effectiveness of these weapons and accessories, we will also examine their optics. This includes tackling attachment professionals where there are few or no usage scenarios. In particular … we may soon see a Cold War equivalent of an immensely popular Modern Warfare sniper attachment.

It is crucial to maintain an attack space where every weapon type can excel, otherwise we run the risk of weapons becoming analogous. In that regard, some types of weapons were able to evade mobility as a core weakness, given the right attachments. We believe this is partly why assault rifles have been able to play the role of submachine guns. While maintaining and embracing gameplay differences between Modern Warfare and Cold War weapons is a priority for us, we felt that motion speed modifiers as they stand would undermine gameplay integrity and overall weapon diversity if left unchecked . These stocks are still a solid choice, even with such a substantial drop – which we believe indicates how strong they were.

Finally, we would like to address the concern that we will only make changes to Cold War weapons. In the future, we plan to take a closer look at some of the Modern Warfare weapons that are struggling.

And as always, please keep sharing your feedback. We always listen!