Since the beginning of this year, there has been a hot topic for WhatsApp and billions of users around the world. In January, news broke that WhatsApp was planning to change its Ts and Cs, with initial reports claiming it would lead to more data sharing between WhatsApp and its parent company Facebook. In addition, WhatsApp users had to agree to the new terms in order to continue using the leading chat app.

In the face of millions of people flocking to rival apps like Signal and Telegram in the wake of news of the changing conditions, WhatsApp has been on a mission to sort out any confusion.

The world’s most popular chat app has been reiterating for months that their new Terms and Conditions do not allow Facebook to access more data from a user’s personal chats.

WhatsApp also eventually moved the deadline for users to agree to these terms from February to May 15, and has now scrapped plans that would cause users who disagreed with the terms to lose access.

But despite all these changes, WhatsApp still faces setbacks – with the final blow to the controversial terms from Germany.

As reported by Android Police, Germany has the brakes on the Ts and Cs change that would go into effect worldwide on May 15.

The country’s data regulator has enforced a ban thanks to procedures put in place through GDPR regulations.

The ban came into effect after emergency talks in Hamburg and was pushed forward by Johannes Caspar, the head of the city’s data protection agency.

Caspar said of the seismic movement: “This warrant is intended to safeguard the rights and freedoms of the many millions of users who consent to the terms of use across Germany.

“My goal is to avoid the drawbacks and damage associated with such a black box procedure.” 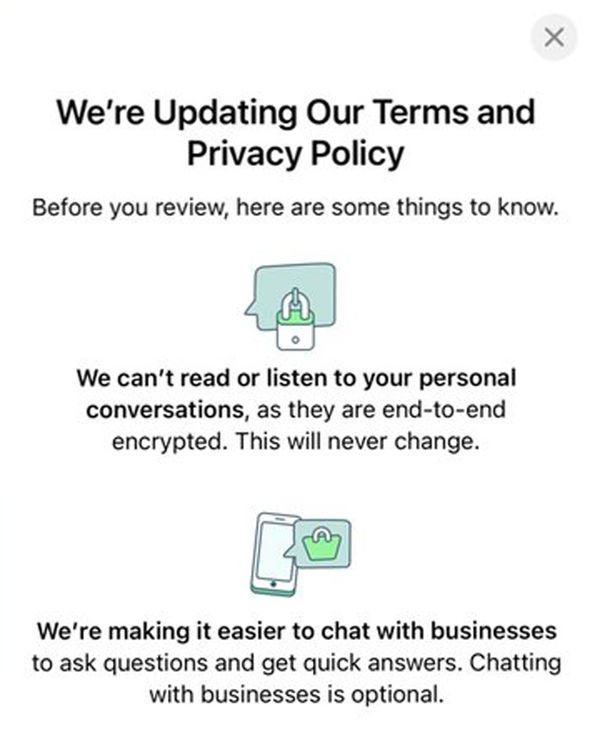 WhatsApp’s new terms and conditions come into effect on 15 May (Image: WHATSAPP)

The emergency warrant used to enforce the ban is only valid for three months and the matter can now be referred to the European Data Protection Board.

This could lead to a legally binding decision affecting all of Europe, which would have major implications for WhatsApp’s new privacy policy.

As it stands, the emergency warrant will already affect millions of people – with WhatsApp used by 60 million people in Germany.

Speaking of the Hamburg decision, a WhatsApp spokesperson said there was “a fundamental misunderstanding about the purpose and effect of the WhatsApp update” and as such “has no legitimate basis”.

The WhatsApp spokesperson told TechCrunch: “Our recent update explains the options people have to message a business on WhatsApp and provides greater transparency on how we collect and use data. As the claims of the Hamburg DPA are false, the order has no impact. on the further rollout of the update. We remain fully committed to providing secure and private communications for all ”.

Overwatch Cross-play confirmed on its way by Blizzard

Serial Cleaners – Clean Up After Crime