Aniplex has released a new key visual and PV for the upcoming anime movie Fate / Grand Order Final Singularity – Grand Temple of Time: Solomon. The events of the film are based on the last act from part 1 of Fate / Grand Order‘s main story. Obviously, this means that for people who haven’t played it yet, the movie will be nothing but spoilers. It will hit Japanese theaters on July 30, 2021.

You can view the PV Fate / Grand Order: Solomon here: 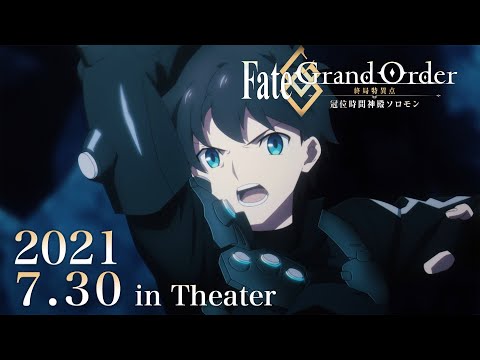 The movie contains a brand new mystical code for Ritsuka Fujimaru, and it is currently unknown if the mystical code will appear in-game to commemorate the movie. As seen in the PV, the Solomon chapter introduces a large recurring cast of Servants from earlier in the story, such as Francis Drake from Okeanos and Florence Nightingale from E Pluribus Unum.

Cloverworks, who handled that Fate / Grand Order – Absolute Devil’s Front: Babylonia, works on Solomon. Babylonia is currently available to stream from services such as Crunchyroll. Production IG worked on the other side Fate / Grand Order movie, Divine realm of the round table: Camelot – Wandering: Agateram. A scale figure based on Bedivere from that movie is currently available for prior order and will be shipped in December 2021.

Fate / Grand Order is currently available worldwide on mobile devices. The Japanese version is currently in between events outside of the Holy Grail Front against Merlin. The English version is in the middle of their White Day event, a story-focused murder mystery. Fate / Grand Order Final Singularity – Grand Temple of Time: Solomon will be released in theaters in Japan on July 30, 2021.

Taiwanese server best-selling list won the championship, such as watching the animation of “Hayao Miyazaki”, the mobile game of “Ni no Kuni” is on...

Overwatch Cross-play confirmed on its way by Blizzard