Photon Studio issued the “anti-996 no overtime notice”, how did the netizens discuss it?

GameLook report/In the game industry where Fortune News is prevalent, it seems that a company has finally taken the lead in making an “anti-involution” posture. This company is no one else but Tencent, a big business.

Recently, Maimai issued a notice about the overtime management mechanism of Tencent Photon Studio Group. The content of the information mainly covers the following points: Strictly abide by the work and rest requirements of Wednesday’s health day; leave the office area no later than 21:00 on working days other than Wednesday; guarantee weekends and weekends, and statutory holidays according to the state and company’s arrangements. From the perspective of the implementation of the notification, the management mechanism will be implemented on June 14, 2021. 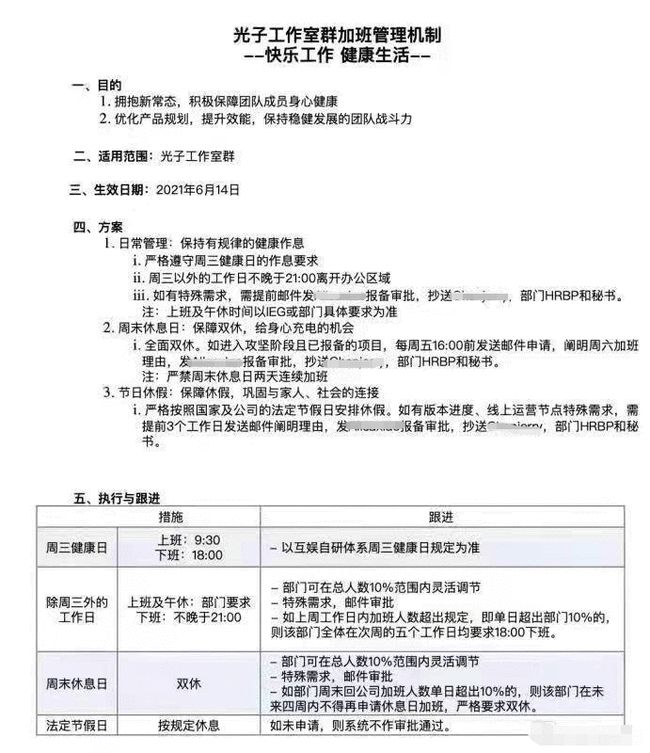 In the game industry, which is suffering from 996, has the Internet giants taken the lead in countering 996? One stone has stirred up waves. This announcement of mandatory no overtime and weekends has produced a very big response not only in the gaming circle, but even in the entire Internet industry. In Zhihu, the question of “how to treat Tencent Photon Game Studio’s overtime management mechanism” has gained more than 2 million pageviews in just one day, directly on the Zhihu Hot List.

For the countless workers who are deeply affected by the 996 Fortune Daily, the problem of overtime is tantamount to hitting their common point. So how do they view this problem?

There are all kinds of voices, but the same thing is the hatred of 996

It can be expected that many strikers in the comment area still agree with Tencent Photon’s mechanism reform. After all, no overtime work on weekdays and weekends and weekends have become a luxury game industry. As one of Tencent’s four major studios, Photon Studios can take the lead to speak to the industry and make a statement. It is undoubtedly excellent. .

As Zhihu netizen Theodore said, this is a “good thing that came earlier than expected.” In his opinion, the high income of the game industry can no longer meet the needs of some talents. Instead, the problem of overtime has become a problem for talents. The key factor to stay. Companies that work less overtime, even if they give less, are more likely to attract outstanding employees.

But we all have a deep understanding that working in a company is different from private life. It is in a community and needs to face the normative pressure and hints brought by the community. When most people work overtime and you do not work overtime, it is very likely that you will have a painful anxiety.

Therefore, some of those who like it think that the establishment of the system is naturally a good thing, but to truly solve the 996 overtime problem, it is not that the establishment of a mechanism can be a matter of course, but that the “team culture atmosphere first”. Only by “creating a culture that does not work overtime can we truly make everyone feel at ease in dealing with the balance of life and work. Setting up a system is only the first step, and culture is the real system, laziness makes people progress.”

Contrary to what most people think, not everyone agrees with the reform of the photon overtime system. GameLook also found that some people made different voices in the comment area, and the thinking logic of these netizens is also worth knowing.

For example, Zhihu netizen “Mfsital” directly pointed the finger at the entire environment and pointed out: “You have the right to leave work before 21 o’clock. Forcing you to leave work before 9 o’clock, it is actually full of likes on the screen. The tribute of the screen.” Similar to this argument, some people think that Tencent Photon’s non-overtime mechanism is just “from 996 to 995, but the blessing is doubled.” 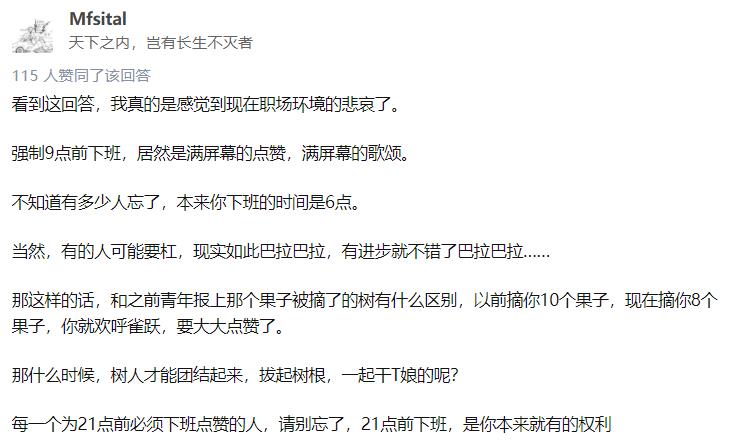 In addition, some netizens have calculated a detailed account of the workload. They believe that the mandatory non-working overtime means that work efficiency must be further improved within a limited time. When the total amount of work has not changed, the pressure per unit time will actually increase, which is equivalent to increasing the challenge in disguise.

At the same time, GameLook believes that the workload of some overtime may be caused by project decision-making errors and team running-in problems. These overtime are actually unnecessary. How to improve the efficiency and accuracy of organizational decision-making is a top priority.

Therefore, before the actual results come out, instead of staying optimistic too early, let the bullet fly for a while.

Tencent Photonics has a special position, and the industry really needs to be reformed. It depends on the waist and tail enterprises.

It has to be said that Tencent Photonics Studio’s introduction of no overtime mechanism has indeed inspired game companies to get rid of the overtime culture to a certain extent. As for the status quo of 996, the final decisive factor depends on the majority of waist and tail game companies.

As one of Tencent’s four major studios, Photon has a very special position both within Tencent and in the game industry. This special status comes from Photon’s absolute dominance of tactical competitive mobile games. 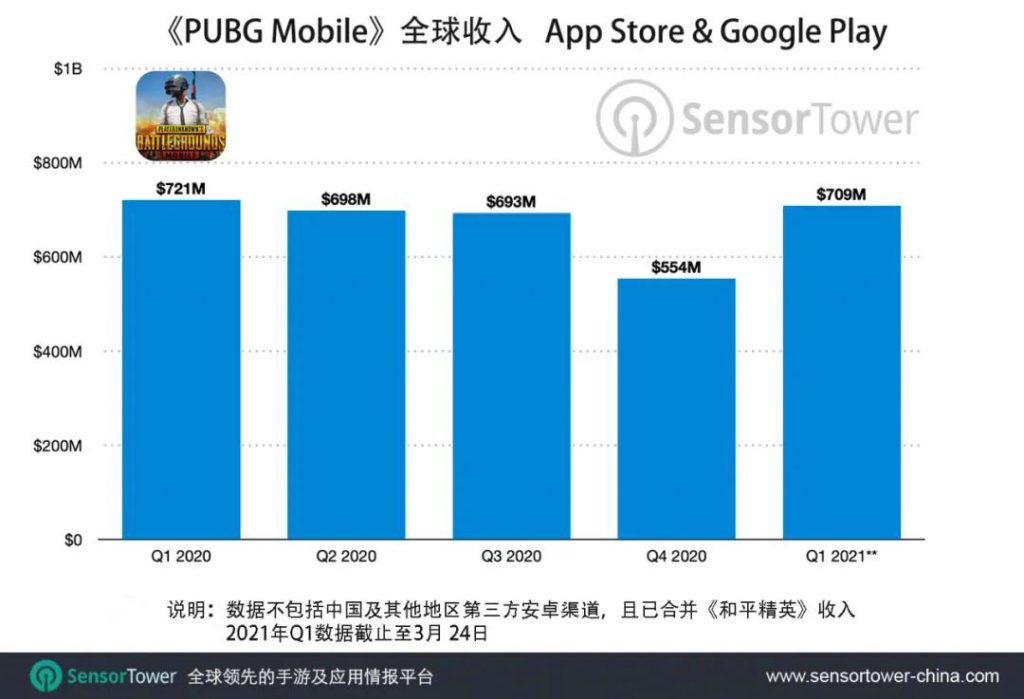 According to Sensor tower data, the “Peace Elite” developed by Photonics (combined with “PUBG Mobile” revenue) will attract US$2.7 billion in 2020, and the global cumulative revenue will reach US$5.1 billion. From Q1 to Q3 last year, “Peace Elite” had an average quarterly revenue of US$704 million. Although last year’s Q4 revenue fell slightly to 555 million US dollars, its revenue in Q1 this year ushered in growth again, reaching 709 million US dollars.

This means that for Photon, it is actually at a stage where there is no external opponent and internal “lying win”. This kind of “lying to win” makes Photon even if a single employee’s work intensity is reduced, it will not produce particularly fatal results for the project. After all, the real shortage of people can be solved by recruiting more people. Photon is not bad for money. In addition, Tencent’s entire game business system is very complete, which has also improved the efficiency of work between departments to a certain extent. Game operation and testing do not require everyone’s participation, not to mention the participation of external partners. The staff left room to rest. Therefore, the photon, which has a special aura and huge financial resources, is not universal in its own conditions in the game industry.

But for more than half of the waist and tail game companies, to compete with thousands of opponents, they must spend enough money and fight for enough lives. Most of these have led company managers to choose to compress rest time to obtain, and behind the scenes What hurts is one’s own health.

In the game industry, there are not a few people who die suddenly at work, and many of them are middle and top game manufacturers. Although gaming has become one of the most profitable businesses in the Internet industry, it is also one of the industries with the highest abnormal deaths in China.

What is the difficulty of 996? Regardless of whether it brings controversy or not, we hope that more game companies will issue a “no overtime statement.”