GB WhatsApp is gaining popularity… but it’s also getting quite the reputation (Image: WHATSAPP • GETTY)

An unofficial version of WhatsApp — the world’s most popular messaging service — that allows users to reply to deleted messages, hide read receipts and more could be a sign that your significant other isn’t being faithful, users warn. Dubbed GB WhatsApp, users can log in with their existing WhatsApp account to unlock new capabilities not available in the official version of WhatsApp.

The third-party app is only available on Android. That’s because GB WhatsApp is not available on any of the major app stores – the Play Store on Android or App Store on iOS. However, Android users can download and install software from third-party app repositories and websites (provided they make some adjustments in their settings menu). GB WhatsApp can be downloaded from a number of sites, with users sharing the links among themselves.

Using an unofficial messaging app, such as GB WhatsApp, with an existing account violates the terms and service you were required to agree to when you signed up for WhatsApp. The app, which is owned by Facebook, warned its two billion users that anyone using apps like GB WhatsApp could be permanently removed from their account.

However, despite the risks, people are still flocking to GB WhatsApp.

On social media, some WhatsApp fans have suggested that those who flirt with WhatsApp permanent blocking do so because GB WhatsApp makes it easier to cheat on their partner. “WhatsApp GB is for cheaters!” summed up one commenter on Twitter.

Dump your partner if they have WhatsApp GB pic.twitter.com/9VWpZd7fO6

WhatsApp GB is for cheaters!!!! pic.twitter.com/Bbadv19ELn

You must be a psychopath and insecure to have WhatsApp GB

told you that GB Whatsapp users can unblock themselves pic.twitter.com/8mqedVGrwC

I didn’t understand WhatsApp GB until last month when I sent her a break up message and how painful she was deleted the message “For everyone” minutes later she replied to the deleted message pic.twitter.com/PeZgVxQvi7

It is certainly true that some of the features built into GB WhatsApp are suitable for this kind of behavior. For example, if you’re using the official WhatsApp app, disabling others’ ability to see if you’ve read a message can strip you of the same privilege. GB WhatsApp is changing that – so you can see when contacts were last online, what messages they’ve read and what time… while no one has any idea if you’ve read the conversation and select not the response, or just not caught up yet.

GB WhatsApp can also hide when you type or record a voice memo… something WhatsApp doesn’t offer at all. Similarly, GB WhatsApp allows users to hide when they last appeared online. So if you were texting someone else last night, the fact that you were “last online” in the wee hours last night wouldn’t be visible to all your contacts in WhatsApp – like in WhatsApp.

And there is even more than that. Deleted messages, which have been completely removed from your chat history, can still be viewed and replied to when using GB WhatsApp. That includes text messages, as well as photos and videos. 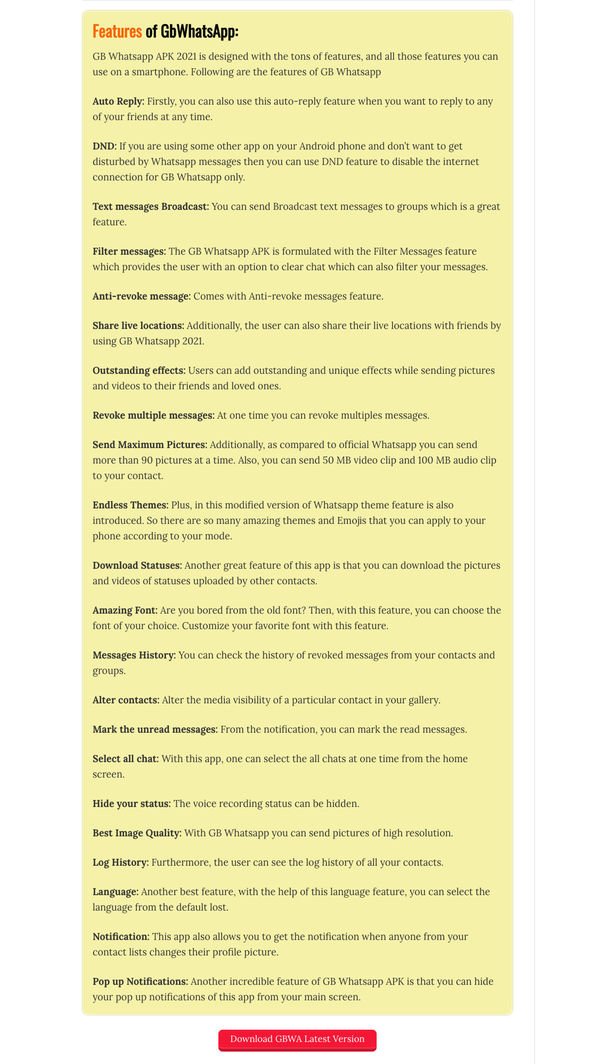 Some of the features available in GB WhatsApp that you will not find in the official WhatsApp (Image: GB WHATSAPP)

All of this has led to the impression that those who are most enamored with GB WhatsApp and its feature are probably those who engage in subterfuge.

“Dump your partner if they have WhatsApp GB,” one person shared on Twitter alongside a screenshot of the dizzying array of features available in GB WhatsApp that you won’t find in the official app, which was developed by the WhatsApp team in California. .

One of them shared their experience with someone using GB WhatsApp. On Twitter they posted: “I didn’t understand WhatsApp GB until last month when I sent her a break up message and how painful she was, deleted the message ‘For everyone’ minutes later she replied to the deleted message”

“You have to be a psychopath and insecure to have WhatsApp GB,” added another.

It’s impossible to tell if the people you message are using GB WhatsApp. However, be aware of signs that they may hide the date and time they were last online, read receipts, or anything else unique to GB WhatsApp can be a good indication.