Google Bans Another 25 Android Apps! You have to remove them NOW or pay a high price

Android Warning – 25 additional apps have been banned from the Play Store (Image: GETTY)

After just blocking nine dangerous apps that tried to steal Facebook passwords, Google has now banned yet another batch of popular Android applications from the Play Store with this latest batch targeting those trying to make money through the latest crypto. mining craze. This new type of online currency has exploded in recent years with huge amounts of people trying to join the revolution and make some quick money. Cryptocurrency mining (AKA – crypto mining) uses the computing power of computers to solve complex mathematical problems that verify cryptocurrency transactions, and the miners are then rewarded with a small amount of cryptocurrency.

The apps recently blocked by Google claimed to offer these money-making mining services in exchange for a monthly fee.

Once logged in, the user was even presented with an activity dashboard that showed how well the app was performing and how much money it was making.

However, it was part of an elaborate scam involving the security team of Lookout Threat Lab discover that – after users paid for the subscription – no real cloud crypto mining ever took place.

A total of 25 applications have been removed from Google’s official online marketplace with Lookout warning that over 100 more apps are available through third-party stores that allow applications to be loaded onto devices.

READ MORE: DO NOT BUY A NEW Android Phone! Something even better will be launched soon

Based on Lookout’s analysis, it is believed that the criminals defrauded more than 93,000 people and stole at least $350,000.

That money is split between users who pay for apps and buy additional fake upgrades and services. Lookout has now classified these apps into two different families called BitScam and CloudScam.

After Google was informed about the problem, Google immediately removed these apps from Google Play.

“These apps could fly under the radar because they don’t really do anything malicious,” said Ioannis Gasparis, a mobile application security researcher at Lookout. “They’re just shells set up to attract users who get caught up in the cryptocurrency craze and raise money for services that don’t exist. Buying goods or services online always requires a certain amount of trust – these scams prove that cryptocurrency is no exception.

This latest warning comes after nine more apps were recently removed from the Play Store after they were found to trick users into handing over Facebook credentials. 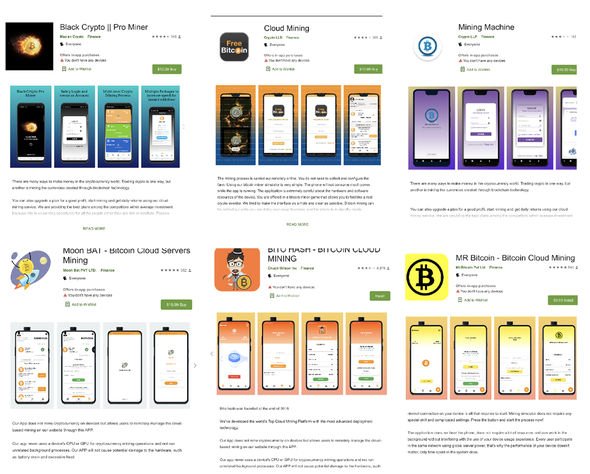 How the apps appeared on Google’s Play Store (Image: VIEW)

Are you considering using cryptocurrency apps? Here’s some advice from Lookout

• Know the developers behind the app. What certificates or credentials do they have, what other apps have they built, does the company have a website and can you contact them?

• Read the conditions. Most scam apps have false information or have no terms and conditions available.

• Use reviews from other app users to your advantage. Reading other users’ experiences with the app can be an eye opener when it comes to identifying scams.

Sky vs Virgin Media vs BT: Are you paying for the WORST broadband connection in the UK?