Call of Duty fans are counting down to the mid-season release of the Reloaded update.

Season 4 Reloaded has a July 15 release date. UK players can join in and enjoy the action from 5am Dutch time.

If you want to make sure you’re ready to go when the new season goes live, you’ll need to preload the Warzone and Cold War updates.

According to Activision, the Season 4 Reloaded update will be available for download sooner. 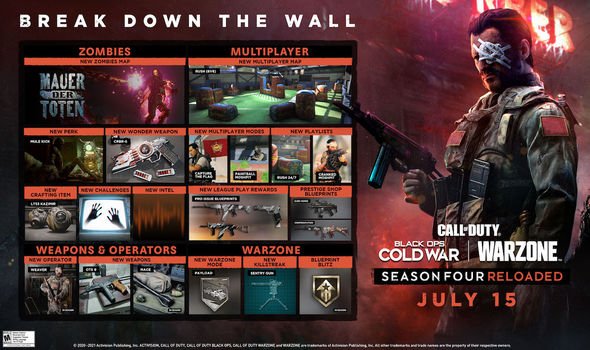 The new main feature is undoubtedly the Mauer Der Toten Zombies map, which is set after the events of Operation Excision.

Agents will navigate the dark streets, lit only by floodlights, street lamps and long-abandoned vehicles, to reach several key landmarks and structures, including a U-Bahn where flaming trains transport undead passengers to unknown parts.

“They won’t be alone, though, if they can find a way to activate a new robotic companion, Klaus, who will help them defeat the undead.”

Other new features include a Wonder Weapon with four unique variants, high-speed ziplines, and new enemies.

As for Black Ops Cold War, Activision is bringing back the classic Black Ops 2 map Rush.

A remastered map from Call of Duty: Black Ops II’s Vengeance DLC pack, Rush is a small 6v6 map set in and around a paintball court.

“This chaotic arena offers multiple opportunities for close quarters and personal combat, with narrow constriction zones to run through and a scattering of outer structures that offer opportunities to be knocked out at longer ranges.”

The paintball themed map will be completed later in the season with a new Paintball game mode.

Netflix Original: Locke and Key season 2 is not coming to Netflix in August 2021 – Netflix News