Number of Chainsaw Man anime episodes? Will it stream on Netflix, Crunchyroll or Funimation?

Chainsaw Man will be one of the biggest anime releases of 2021. The first trailer for the dark fantasy horror debuted recently and quickly gained millions of views in the span of a few days. At the time of writing, the Chainsaw Man trailer has been viewed more than 8.6 million times on Twitter alone in just over two weeks. On YouTube, the Chainsaw Man trailer has been viewed approximately 14 million times on four different channels.

The excitement and hype for Chainsaw Man is huge, but there are still plenty of things that MAPPA hasn’t announced.

We’ve already discussed when the Chainsaw Man anime release date could be in another article.

But this time around, we’re looking at some other burning questions for fans, like how many episodes will the Chainsaw Man anime be?

And will Chainsaw Man be available to stream on Crunchyroll, Funimation or Netflix?

At the time of writing, confirmed details about the Chainsaw Man anime are thin on the ground. And this includes the number of episodes.

MAPPA has not announced how many episodes will be in the first season of Chainsaw Man.

However, fans have speculated how long it would take to adapt Part 1 of the Chainsaw Man manga.

It is speculated that between 24 and 26 episodes should be enough to cover the 97 chapters in Volume 1 of the manga.

If Chainsaw Man Season 1 is this long, it would be a similar length to another MAPPA hit series. 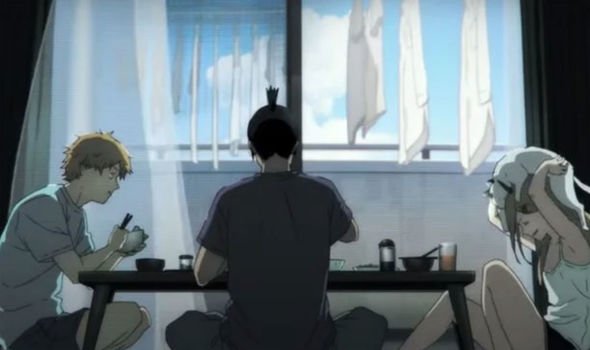 The Chainsaw Man anime is one of the highly anticipated new shows of 2021 (Image: MAPPA)

CHAINSAW MAN STREAMING – WILL CHAINSAW MAN BE AVAILABLE TO WATCH ON NETFLIX, CRUNCHYROLL OR FUNIMATION?

Chainsaw Man is one of the greatest animes of 2021.

So you’d think the show will go to Crunchyroll and/or Funimation, the two biggest anime streaming services out there.

Shows created by Chainsaw Man animators MAPPA went to Crunchyroll and Funimation in the past.

Streaming rights for Chainsaw Man have not yet been confirmed.

However, a leak that surfaced earlier this year claimed the anime would be available to stream on Netflix.

This was revealed by Twitter user @MangaMogura who posted: “Chainsaw-man tv anime, by Studio Mappa, will be on Netflix according to a reliable weibo user.”

Even if Chainsaw Man becomes available to stream on Netflix, it doesn’t necessarily mean it will be a platform exclusive.

Over the years, Netflix has built up a hugely impressive anime library, with some shows like Violet Evergarden, Neon Genesis Evangelion and Hi-Score Girl exclusive to platform, while other shows – like hit anime Demon Slayer – are available to watch on different platforms.

Netflix Movies: What is The Losers on Netflix? – Netflix News