Chromecast with Google TV gets a groundbreaking new trick

Google uses its next-generation streaming box, the Chromecast with Google TV, to entice viewers to subscribe to its video game streaming platform, Google Stadia. Owners of the latest Chromecast will see the Netflix-for-games service appear in the For You tab.

The latter is one of the biggest differences between the Chromecast with Google TV and previous set-top boxes under the Chromecast brand. While previous iterations were controlled entirely by a smartphone, with users choosing an episode or movie on their handset and then sending the video to the Chromecast, the recently redesigned model has its own menu and streaming apps.

As you watch, Chromecast will begin to suggest Google TV based on your taste. These featured movies and box sets appear in the For You tab. It’s unclear whether Google tailors Google Stadia’s recommendation to certain viewers based on their interests, or whether it thinks everyone will enjoy the latest subscription service.

If you’re subscribed to Google Stadia, all the games you play will be treated as box sets and movies in the Google TV interface. As such, on the homepage you can jump right back to your latest title under the “Recently Played Game” heading. Stadia can also be added to the Your Services page in the Settings menu. 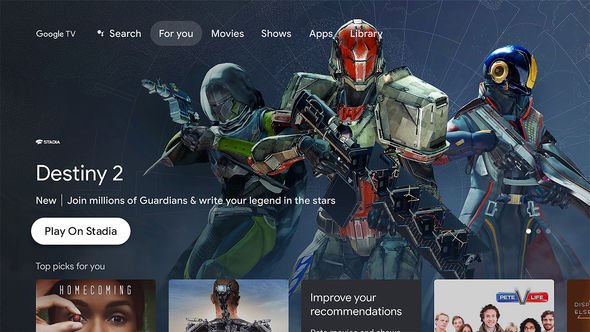 An example of the game streaming service highlighted in the For you tab on a Chromecast (Image: 9To5GOOGLE)

Google Stadia launched in November 2019 and the free tier will follow in April 2020. Stadia lets you play blockbuster video games on a variety of devices, from smartphones to tablets and Chromecasts. While none of these gadgets enjoy the amount of processing power found in a PlayStation 5 or Xbox Series X, Google makes it possible to play top games by handling all the processing in its server farms.

So while Google handles all the complex rendering necessary, all your device needs to do is stream the resulting images.

As such, devices designed solely to handle a box set binge on Netflix can play some of the biggest video game franchises. That’s because they just stream footage — just like watching Netflix. Google Stadia supports resolutions up to 4K Ultra HD at 60 frames per second and support for high dynamic range (HDR) images.

That is comparable to what we see from the latest generation of game consoles from Sony and Microsoft.

With a deeper integration of Chromecast with Google TV, it will be interesting to see if more people switch their consoles for streaming dongles to play the latest titles. If Stadia isn’t your thing at all, fingers crossed Google will stop populating your Chromecast’s homepage with recommendations for it.

Amazon Eero 6 review: Future-proof your WiFi with this no-brainer upgrade

Easy to point the world: higher purchase cost will promote the marketing reform of mobile games overseas, 3D material will be the trend