With a full score of 10 in TapTap, Rhea’s new mobile game is moving again!

GameLook reported / Speaking of Rhea games, the first reaction of players must be the “Cytus” and “DEEMO” series. This Taiwan-based manufacturer has been deeply involved in mobile music games for many years. The representative work “DEEMO” has sold more than 2.4 million sets with a score of 9.3, making it the highest-selling buyout audio game in TapTap.

Standing on the broad shoulders of “DEEMO”, the sequel “DEEMO II” received 650,000 reservations on TapTap without any surprises. A total of 3,415 titles were given expectations for this work, which was a perfect score of 10. 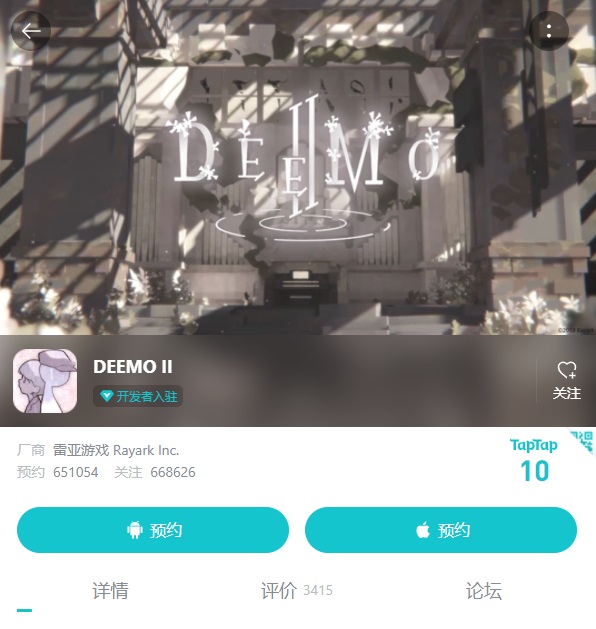 The previous work tells the story of the mystery creature “DEEMO” who has been playing the piano in the tree house world and meets a girl who has fallen from the sky and has no past. DEEMO decides to send the girl back to her hometown, full of love and hate. This week, the adapted animation of “DEEMO” also announced a new PV. The animation is directed by Junichi Fujisaki and Zhou Ping from Matsushita, and the theme song is produced by Kajiura Yuki. Famous voice actors such as Taketatsu Ayana, Tansheng Akira, Onitou Akira, and Sakura Ayane participated in the performance. The road of “DEEMO” multimedia IP has been opened. 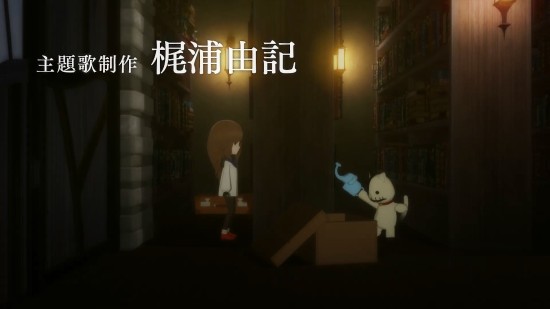 650,000 appointments, full expectations, why is “DEEMO II” gathering so many favorites?

In the setting of “DEEMO II”, the two of them are in a fantasy country with endless heavy rain. Creatures wet by the rain will turn into white petals and disappear. Therefore, everyone hides in the station to avoid the rain, and the heroine is also among the crowd. . And there is a grand piano in the station, its sound can push away the clouds and fog, disperse heavy rain, protect the station from rain erosion, and let the sun return to the ground. The two protagonists will explore the hope of saving the world.

On the 15th of each month, Rhea will release some new information. “DEEMO II” has serialized 9 “boys in the station” stories in the TapTap forum.

On July 15, Rhea revealed the new PV of “DEEMO II”. As mentioned above, it can be felt that the story continues the usual fairy tale style of “DEEMO”, and the setting of the world view and the tone of the story have aroused fans’ infinite reverie.

And this game uses 3D art, the light and shadow are more realistic, and the use of colors also highlights the rainy atmosphere. The game world is as light and dreamy as a fairy tale world.

However, the core competitiveness of the music game is still in the music and chart. Although the difference between this game and the previous game is not visible on the system, it is still a touch game such as falling and sliding, and it is difficult to see one or two on the chart, but Rhea can use just over a minute of music in the PV. It brings the players into the dreamlike situation of “DEEMO II”, the music and the picture complement each other, sublimating the beauty of a kind of artistic conception, which is enough to make the players feel at ease about the quality of the music.

It can be seen that Rhea has fully grasped the core demands of series fans for “DEEMO” and brought these elements to “DEEMO II”. GameLook once reported that Rhea’s development philosophy for the sequel is “familiar with the existing experience, kindness and depth.” In this way, it is not surprising that this work has attracted much attention. And behind this sense of smell is Rhea’s understanding of music games and deep development background. 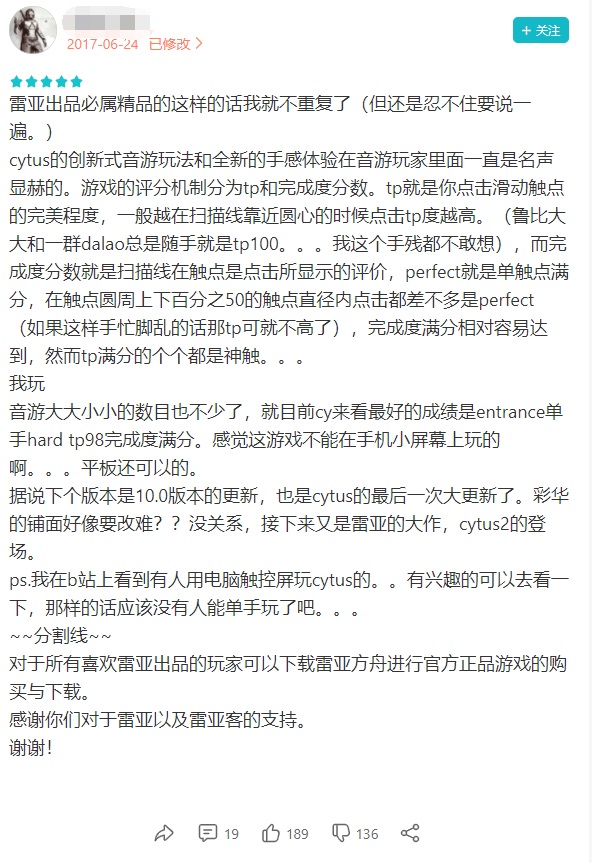 Rhea understands the players so much, and naturally gains a high level of trust from the players. In the community of Rhea’s other major product “Cytus”, a player couldn’t help but said that Rhea’s products must be excellent. Series, it is said that the works are full of innovation, precise management, and excellent hand feeling. Even thanks to other players, he has become a “tap water”.

The picture is the “innovative gameplay” of this player. It can be found that, unlike DJMAX and other audio games transplanted from arcades and consoles, Rhea’s games are designed completely based on the characteristics of the touch screen, so the touch of the chart The performance, difficulty design and visual impact are completely different. Even in the relatively traditional “DEEMO” series, the slider is designed for touch screens rather than buttons. It can be seen that Rhea has a very full understanding of mobile platforms, and it is no wonder that it can make a picky and niche audio game player buy it on the mobile terminal. 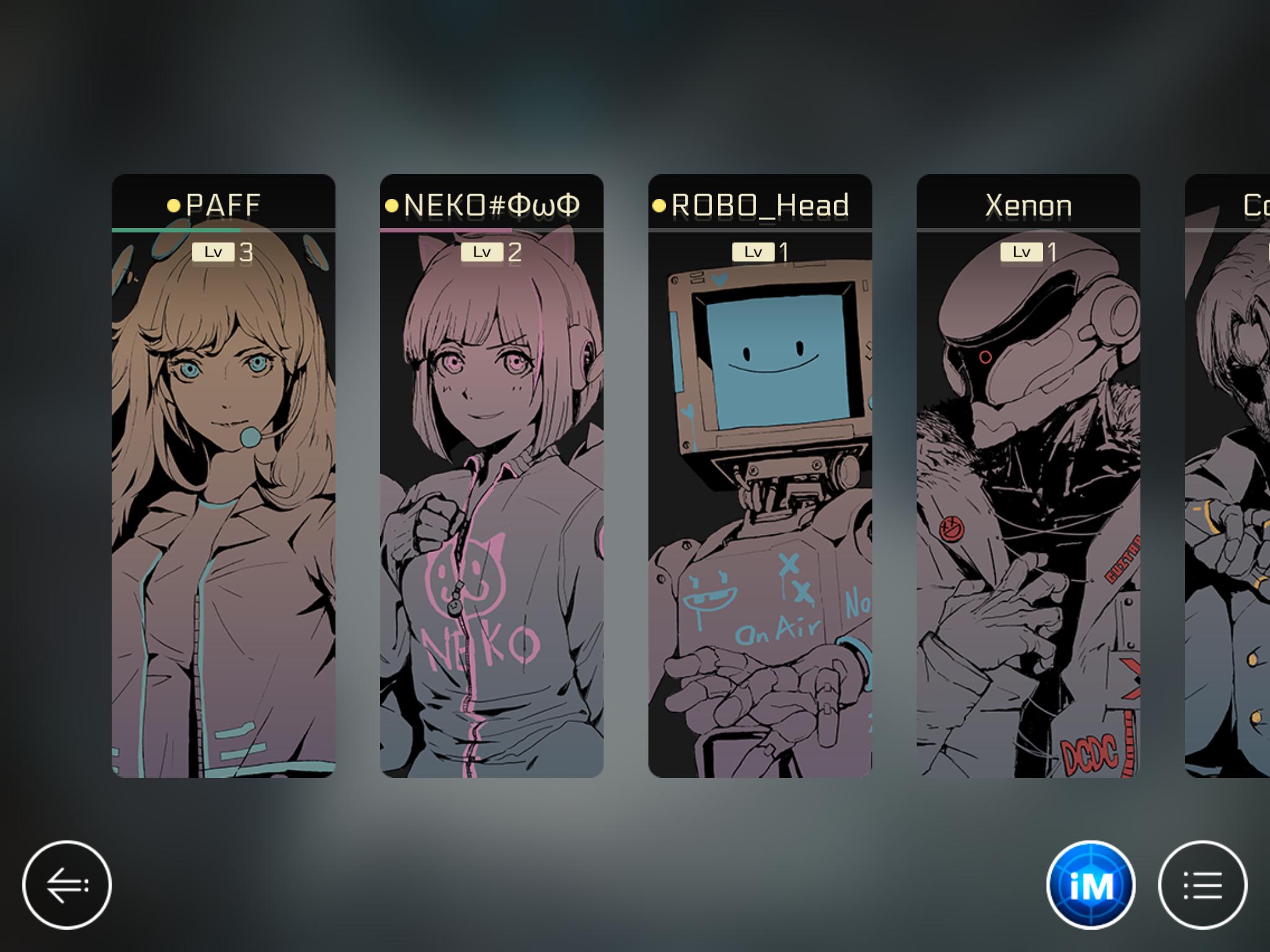 Rhea believes that the design of stories to lead players into the game world is very important. Players can not only have fun with the music game itself, but piece together story clues during the game has also become a very important core value of the game, which also explains the “DEEMO” “Why is it possible to portray a story that is unforgettable for players? Why is “DEEMO II” used as an audio game to publish short stories.

In “Music World Cytus II”, the story of the game is not much better. The five characters lead the player into a new world view, allowing the player to obtain more clues about the story content as the game progresses. Not only does the player gain a sense of accomplishment because of the progress in the process of the music game, but also is amazed by the development of the story.

Telling stories in the music tour, listening to music from the stories, Rhea’s ability to switch between two sides, can be said to be the key to success.

Reading the players and the categories is the ability that countless manufacturers dream of. Rhea not only understands his products enough, but also deeply understands the needs of players. It may be very difficult to think of success.

Nowadays, when many developers are making games, they only think that one part of the content is “watermelon” and the others are “sesame”. They don’t realize that the game as a whole actually has a great barrel effect. If Rhea only strengthens its products and cuts out stories in terms of audio games, then there will be no Rhea today. In the same way, if a two-dimensional game only redraws, and an action game only focuses on combat, it will not be a real masterpiece. In many cases, you can often find a breakthrough when you turn your head.