Tales of Arise Skits, side activities showing next week week

More information about Tales of Arise will be shared in a new livestream next week, Bandai Namco confirmed today.

The new live stream, which will air next week on July 29 at 4:00 AM PT, 7:00 AM ET and 1:00 PM CET, will showcase some of the game’s side activities, such as camping and fishing. Skits, one of the main features of the series, will also be featured during the live stream, which will be broadcast on the Official Stories from YouTube Channel. 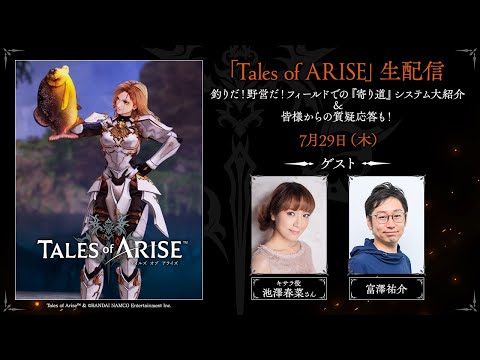 Tales of Arise aims to be one of the best JRPGs this year. I had the chance to try the game out last month, and I absolutely loved what I experienced.

I’ve been a fan of the Tales series since Tales of Destiny and am always eager to try out a new installment in the series knowing full well that I’ll find all those familiar elements I’ve come to love over the years. went to keep. Although we still don’t know how the interaction between the story and the characters will develop in the game, as the preview version was rather light in this regard, the many adjustments in the combat system somewhat break this tradition. As such, Tales of Arise feels like a good step forward for the series, although the low number of assignable Artes and lack of a guard button feel a little disorienting at first. Change requires sacrifices, though, so I’m even more interested than before to see if removing some staples from the series has been worth the effort.

Rena has ruled Dahna for 300 years, plundering the planet of its resources and depriving people of their dignity and freedom. Our story begins with two people, born on different worlds, who each want to change their destiny and create a new future.

Tales of Arise offers a premium JRPG experience with a diverse cast of characters, an intuitive and rewarding combat system, and an engaging story set in a lush world worth fighting for.