Google has added a new layer of security to its Chrome web browser, but only for the one on the iPhone. Chrome users can now protect incognito mode tabs with Face ID, the facial recognition feature built into the latest iPhone models. So even if you hand your smartphone to a friend and they launch the web browser, they still won’t be able to check what you’ve watched without going through the extra layer of security.

If your iPhone doesn’t support Face ID, Google will allow users to rely on Touch ID fingerprint scanners or a passcode.

The new feature, now available to users worldwide, can be enabled by going to the Settings menu, tapping Privacy, then Lock Incognito Tabs. After that, each of your Incognito Mode tabs will be under lock and key until the security test passes.

For those who don’t know, incognito mode keeps your activity from showing up in the web history menu or the predictive search feature on Google, which suggests past searches to speed up repeat searches. 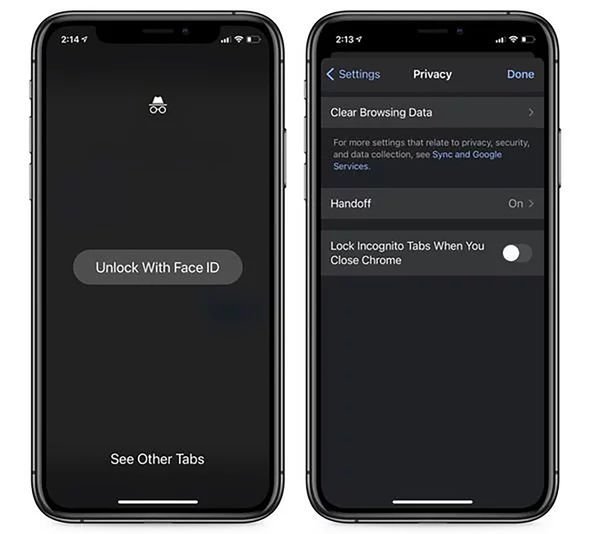 iPhone owners can enable the feature by going to Settings > Privacy. to go (Image: GOOGLE)

While Incognito Mode is great when it comes to buying surprising birthday gifts on a shared device, it doesn’t hide your activity from your internet provider, the company that makes your Wi-Fi router, or any of the websites you visit. So don’t think of it as some kind of invisibility cloak.

Google unveiled plans in February to add Face ID checks to Incognito. After the necessary checks from beta testers, the update is now available.

The update is available on iOS devices. On shared gadgets, such as an iPad, the ability to lock your secret basket in Incognito mode with a Face ID scan can be immensely useful. And save some families from spoiled surprises.

You can now download Chrome 92 from the App Store.