Sensor tower: 2021Q2 “The Horse Racing Girl” has attracted US$370 million in gold in Japan, and Chinese manufacturers still account for 25%

The latest data from Sensor Tower Store Intelligence shows that the total revenue of the Japanese mobile game market in Q2 2021 was US$4.58 billion, a year-on-year increase of 7.3%. In this issue, there are still 29 Chinese mobile games shortlisted in Japan’s TOP100 best-selling list, attracting more than 850 million US dollars in total, and winning 25% of the market share. The detailed data is as follows.

After experiencing rapid growth in the past year, the overall revenue of the Japanese mobile game market in Q2 this year fell back to US$4.58 billion, but it was still an increase of 7.3% over the same period last year. Among them, Golden Week is the peak season for mobile game consumption over the years, and this year is no exception. On May 1, Japan’s mobile game market revenue reached 138 million U.S. dollars, which was the second highest in daily turnover this year, second only to the New Year’s Day on January 1. In terms of platforms, iOS revenue accounted for 57.8%, and Google Play revenue accounted for 42.2%. 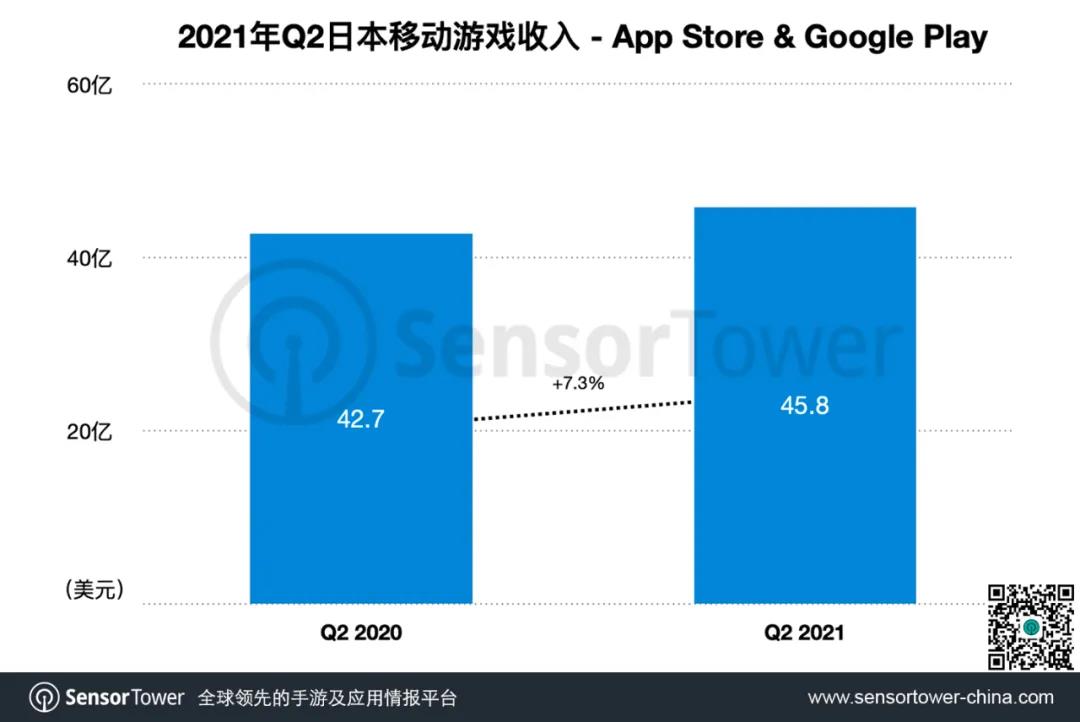 Although mobile game revenue has fallen, and new products such as “The Horse Racing Girl” and “Ninoki: Interlaced World” have raised the threshold of competition at the head of the market, Chinese manufacturers have performed stably. In this period, 29 Chinese mobile games are still included in the TOP100 best-selling list in Japan, with a total of 850 million U.S. dollars, an increase of 118% compared to Q2 in 2019, and accounting for 25% of the total revenue of the TOP100. 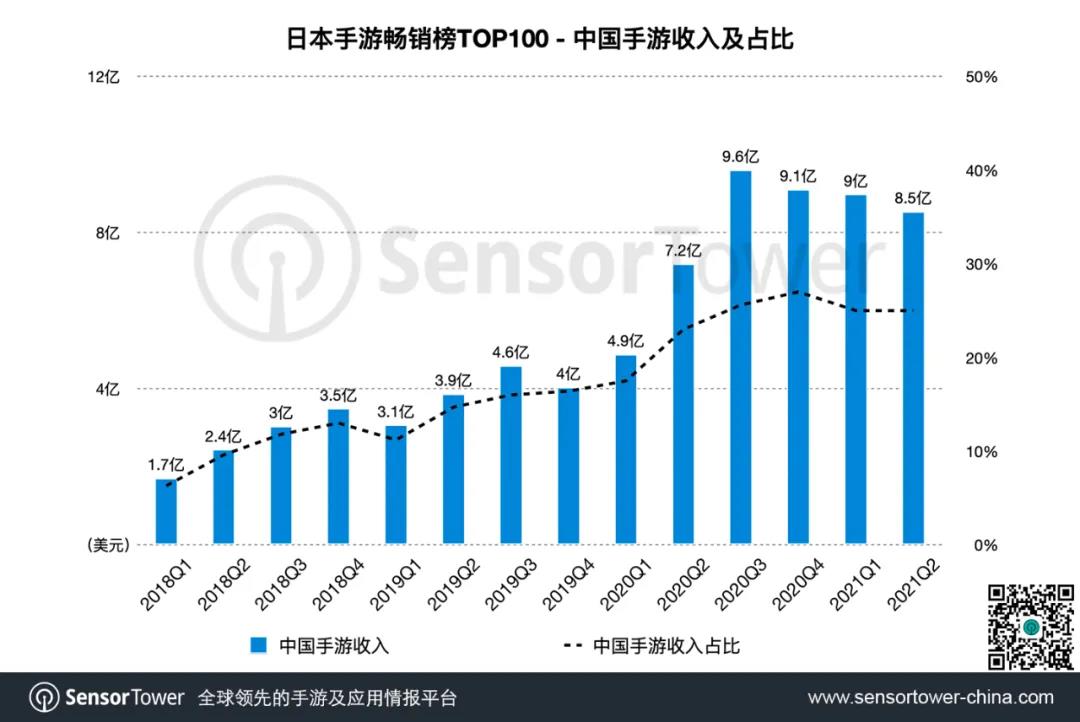 The download volume of the Japanese mobile game market in Q2 was stable, but compared with the peak download volume during the Q2 epidemic last year, it decreased by 22.4% to 177 million times. In terms of platforms, 58% of downloads from the App Store and Google Play accounted for 42%. 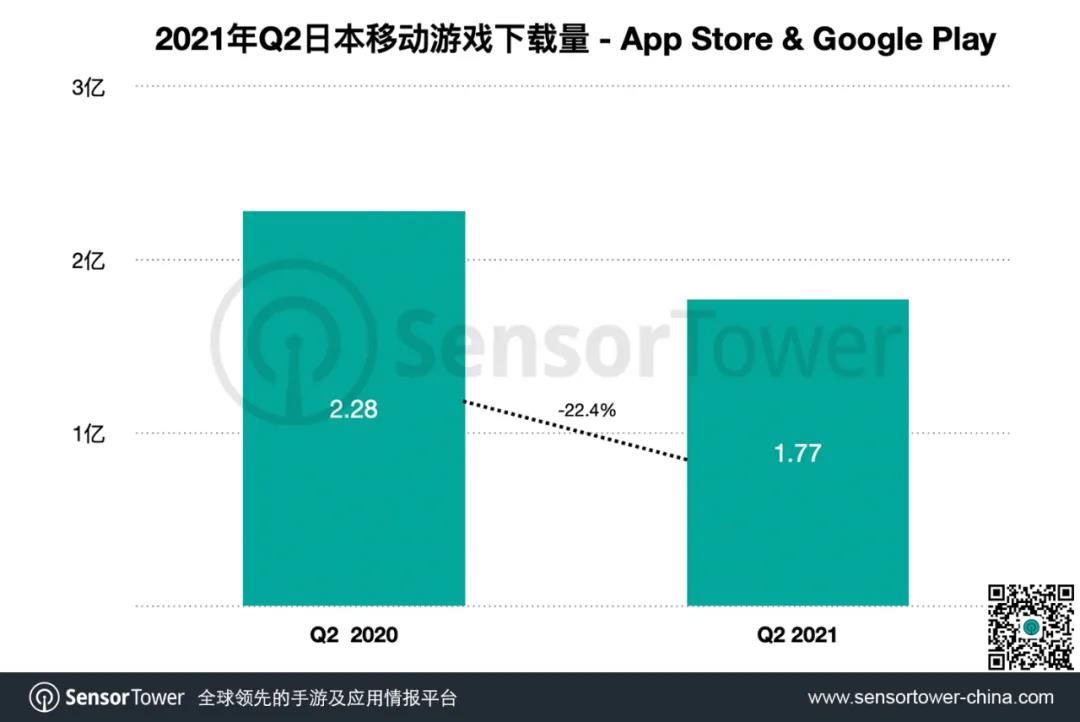 The two-dimensional mobile game “The Horse Girl”, which was launched in February, had an estimated revenue of US$370 million in Q2, breaking the long-standing monopoly of “Monster Marble” on the top spot. The latter retreated to the second place with nearly US$200 million in revenue.

In terms of downloads, “The Horse Racing Girl” ranked first with nearly 3 million downloads, significantly surpassing the new game “Ni no Kuni: Interlaced World” (1.8 million). The manga mobile game “My Hero Academia” was launched in mid-May, ranking No. 5 on the list. 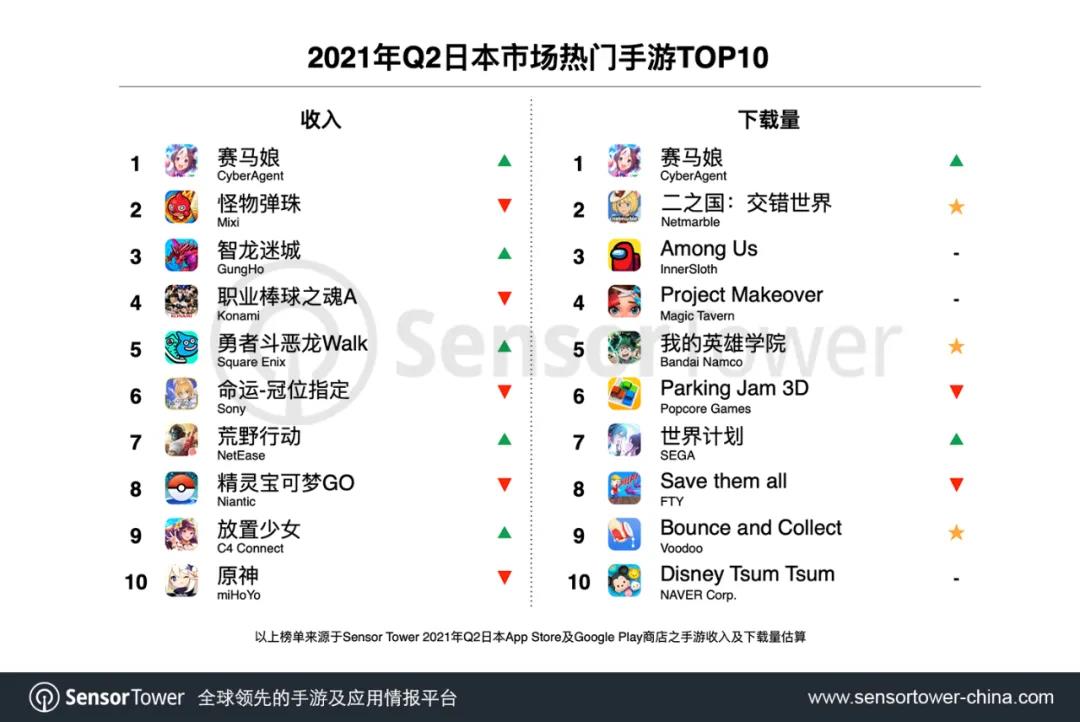 Although the top of the best-selling list of Japanese mobile games is solidified, it is a different picture from the growth list. 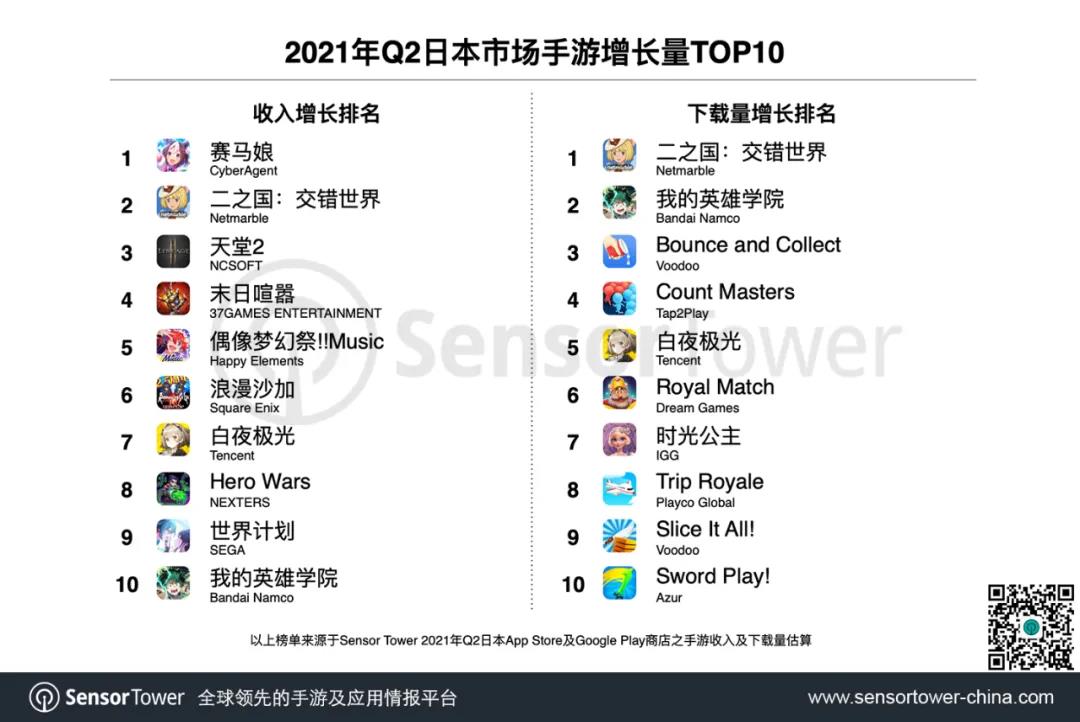 In this issue of NetEase’s Wilderness Action, it attracted nearly 120 million US dollars in Japan and returned to the top of the revenue list. In the 6th year of continuing to build IP, Le Element’s “Idol Dream Festival!! Music” revenue increased by 28.5% month-on-month and 56.4% year-on-year, setting a record high.

The fastest-growing game on the list is Sanqi Mutual Entertainment SLG+ to eliminate the mobile game “Doomsday Humor”. Revenue in this period increased by 302% month-on-month and dropped to No. 8. 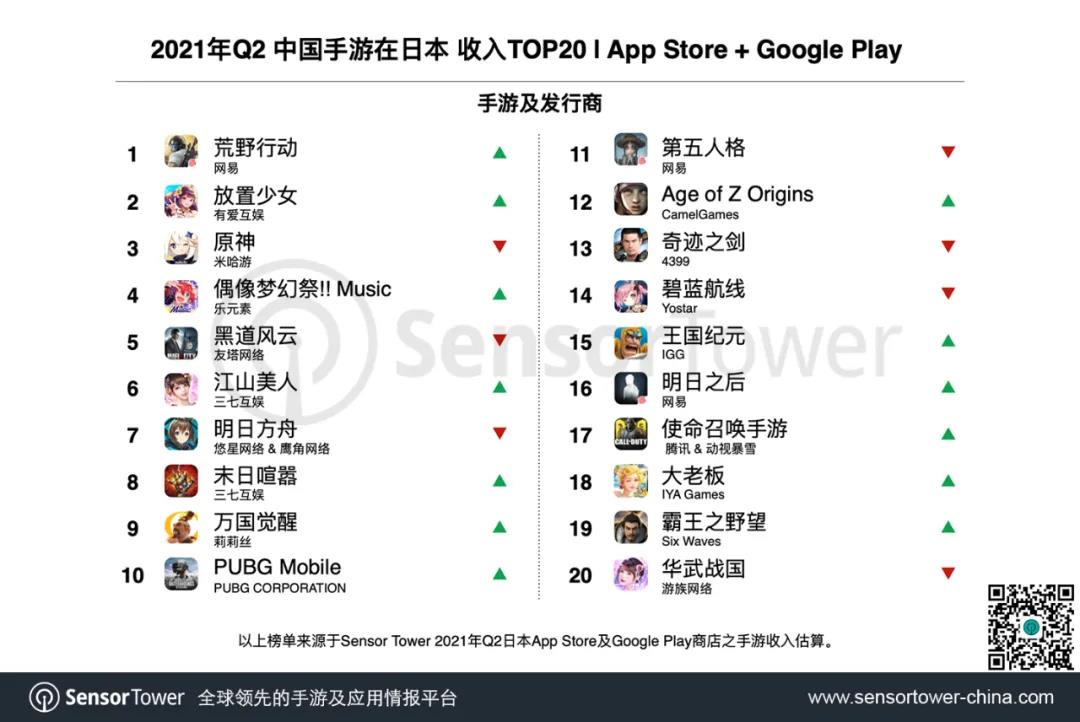 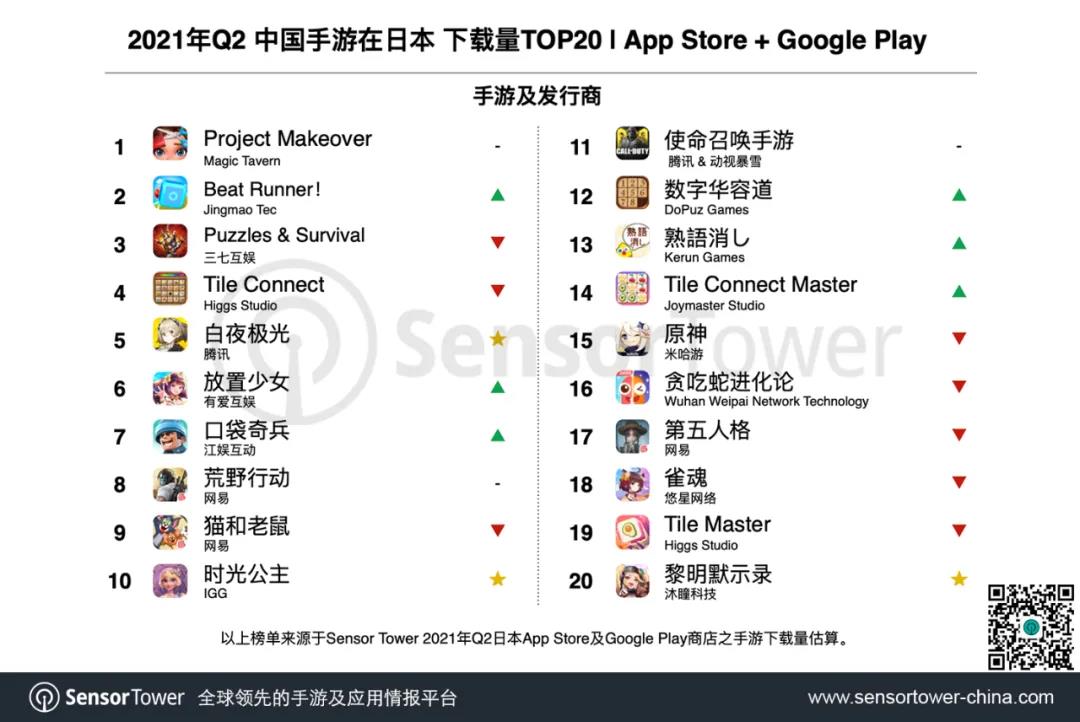 Entering 2021, the Japanese mobile game market continues to bring new surprises to the industry. Following a record high in Q1 revenue, the revenue of this issue of “The Horse Racing Girl” has surpassed “Monster Pinball” and has become the most successful new game in recent years. As the second largest overseas mobile game market, the Japanese market is showing new opportunities and at the same time becoming an important source of revenue growth for more Chinese manufacturers.