The last Shin Megami Tensei V demon video shows Garuda, which is a demon that has appeared many times in previous SMT and Persona games for. While in real life Garuda is a being that appears in multiple religions, the version that SMT V (and indeed, other Atlus works) is derived from Hindu legend.

Garuda introduces himself and shows off his various skills in the short teaser. The majority of the skills he shows are those of the entire party. For example, he increases everyone’s avoidance and accuracy with a Masukukaja. He then attacks a group of Succubus with a Yabusame Shot and then a mob of Girimehkala with Mazandyne. The video ends with a preview for the next demon. Or, to be more specific, angel. 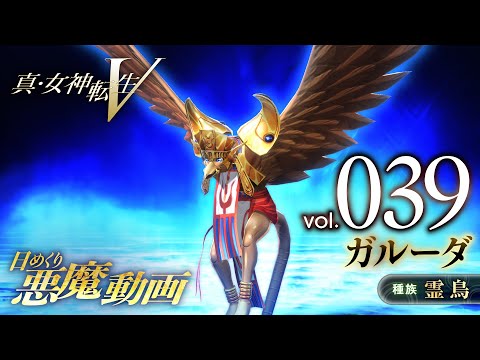 There are a total of 39 videos, including today’s Garuda, showing the demons that will appear in the near future SMT V game. There are about 175 more demons that Atlus can show us. Here is a list of the previous ten demons that appeared on Atlustube: