Microsoft (NASDAQ:MSFT) has again delivered a series of prospect-shattering results for the quarter ended June 30, 2021, thanks in large part to the usual suspects, including the Azure cloud division and enterprise products, including Office 365, Dynamics 365, and LinkedIn. Unfortunately, the company’s Xbox division, which has been doing well for several quarters thanks to the growth of Xbox Game Pass and the launch of the Xbox Series X and S consoles, suffered a year-over-year revenue decline in the fourth quarter.

Microsoft had revenue of $46.2 billion and net income of $19.1 billion in the fourth quarter of 2021, a respectable 21 percent year-over-year increase in revenue and a whopping 42 percent in revenue. Earnings per share were $2.17, ahead of the $1.92 per share analysts had expected and 49 percent higher than the same period last year. For the full fiscal year 2021, sales were $168 billion and revenues were $69.9 billion, up 18 percent and 32 percent, respectively. Microsoft shares fell 2 to 3 percent in after-hours trading, then rebounded sharply after the company’s earnings call. 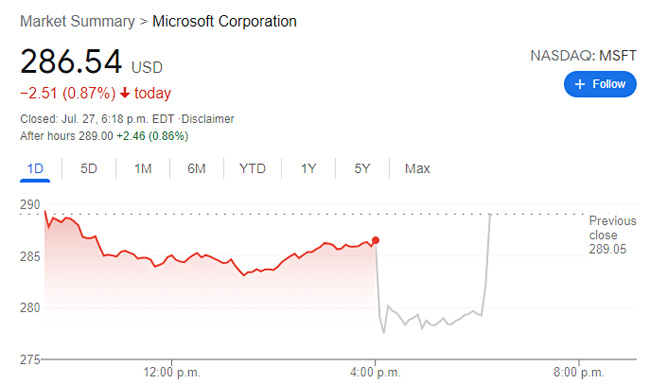 The Cloud gets new Steam

As usual, the Q4 effects of business productivity services such as Office 365, Dynamics 365 and Teams and the Intelligent Cloud division cannot be overlooked. The adoption of Azure drove Intelligent Cloud revenue to $17.4 billion, up 30 percent year-over-year, ahead of the 23 percent increase in the third quarter. This cloud division warming was driven by a wide range of new partnerships between businesses and the public sectorranging from big banks like Morgan Stanley to the US military. Of course, products that help teams work from home are still a goldmine given the state of the world, with Dynamics products rising 33 percent, pushing revenue of the Productivity and Business Processes division to $14.7 billion, up 27 percent in compared to Q4 2020.

The Productivity and Intelligent Cloud divisions had their weight this quarter, as some of Microsoft’s companies reported in the fourth quarter. It was a disappointing quarter for Xbox, which went from a very healthy 50 percent year-over-year revenue increase in the third quarter to a 4 percent decline in the fourth quarter. While Microsoft struggled to get consoles on the shelves, Xbox hardware sales were still up 172 percent year-on-year, with the decline in gaming revenues due to a simple lack of games to sell. During the same Q4 period last year, Microsoft delivered Gears Tactics and Minecraft Dungeons, and this year they offered, well, nothing. Q1 2022 could suffer a similar fate as Microsoft published four games during the period last year and this year they will only publish two. That said, those two titles are strong (Psychonauts 2 and Age of Empires IV) and maybe Microsoft can bring more Xbox Series consoles to retailers.

Xbox wasn’t the only section of the More Personal Computing division to fall underfoot — Surface sales were down 20 percent year-over-year and Windows OEM sales were down 3 percent. That said, Windows Commercial Products and Cloud Services were up 20 percent.

Q4 2021 has really demonstrated the value of Microsoft’s integrated cloud and business productivity stack, as they can easily drive the business to big profits, even if other aspects of the business sometimes falter. Based on the words of Satya Nadella, CEO of Microsoft, it sounds like the company will continue to fall back on its cloud business as they try to build new “franchises” such as gaming, LinkedIn, and Microsoft Security…

We innovate across the technology stack to help organizations realize new levels of technical intensity in their business. Our results show that when we perform well and meet customer needs in differentiated ways in large and growing markets, we generate growth, as we’ve seen in our commercial cloud – and in new franchises we’ve built, including gaming, security, and LinkedIn, all of which have generated more than $10 billion in annual revenue over the past three years.

Microsoft has ridden out COVID-19 with style and looks set to start FY 2021 with a healthy Q1, which they expect to bring in $43.3 billion to $44.2 billion in revenue. If their recent hot streak is any indication, that’s a conservative estimate. Looking further into the future, the launch of Windows 11 and the end of Xbox and Surface delivery restrictions should only push the results further.