Down reports on eBay hit UK – Thousands of users report problems with the site (Image: EBAY•GETTY)

eBay down reports are pouring in today, with thousands of users reporting problems with the online auction website. Independent Failure Monitor Down Detector has registered a massive spike in eBay down reports today, with users receiving a DNS error page when they try to visit the site. According to the Down Detector statistics, the eBay problems started at 12:30 BST.

At the time of writing, Down Detector UK has registered a spike of over 2,000 reports from eBay.

When the eBay issues hit, users took to Twitter to report the issues they were facing.

While another posted: “Is the ebay website in the UK down @eBay”.

One added: “eBay UK is down – server problem again”.

And another wrote: “eBay UK has gone down!”

Express.co.uk has contacted eBay for comment and asking if a solution is being worked on.

“The server is temporarily unable to process your request. Please try again later.” 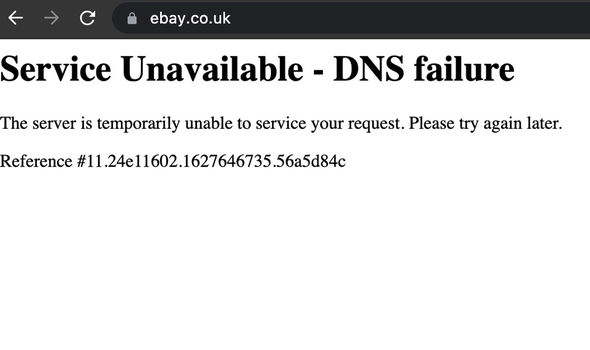 eBay users today are getting this DNS error (Image: IG)

The eBay troubles come on a day when popular, well-known name services have been severely disrupted.

The social networking app Snapchat had a massive outage today that caused the service to be disrupted for hours.

The problems with Snapchat came overnight as problems were also reported with the Apple App Store.