PS Plus vs Xbox Games with Gold (Image: SONY)

The free PS Plus and Xbox Games with Gold games are now available for August 2021.

After an incredible year of free games on PlayStation Plus, Sony dropped the ball a bit in August.

That’s on top of Plants vs. Zombies: Battle for Neighborville and Tennis World Tour 2 on PS4.

All three PlayStation Plus games are available to download from now until Tuesday morning, September 7.

On Xbox, Games with Gold subscribers can currently download Darksiders 3 and Lost Planet 3.

This will be followed on August 16 by 3D platformer Yooka-Laylee, as well as the classic SNK fighting game Garou: Mark of the Wolves.

With the latest batch of free games now available, it seems like a good time to pit PlayStation against Xbox in a battle for the monthly games.

Can Sony take a shocking win despite a lackluster lineup, or has Microsoft scored a rare win over PlayStation?

Hunter’s Arena: Legends, first on PlayStation Plus, is a brand new battle royale game where players compete to be the last one standing.

The 30-player combat-based Battle Royale is set in an ancient era where humanity battles each other and a growing legion of demons have been unleashed on the world.

“In this vicious frontier, you will face threats on two fronts. Enter high-risk, high-reward dungeons to encounter demonic enemies. Dangerous but necessary for your continued survival, you will earn powerful items and experience points.

“Making yourself stronger gives you a much-needed edge on the battlefield when you take on your Hunter brethren.”

Tennis World Tour 2 speaks for itself, as Plants vs. Zombies: Battle for Neighborville is a team shooter with a cartoonish visual style.

“Choose one of 20 fully customizable character classes and perfect your playstyle while earning new rewards for every victory on the battlefield.

“Get together with friends, both in couch co-op and online, and take on a cascade of new challenges, take on hostile hordes in PvE, take on others online, or brave total chaos in the new Battle Arena.” 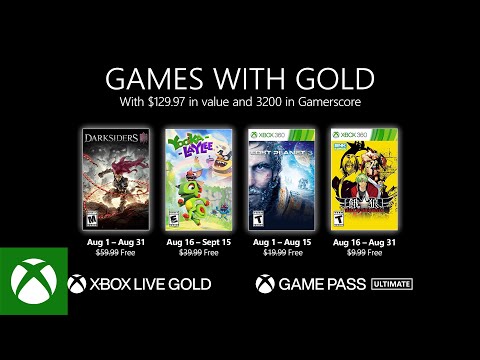 Darksiders III is arguably the most notable free game available this August as part of Games with Gold.

Take on the role of Fury, one of the Four Horsemen of the Apocalypse, in her quest for the Seven Deadly Sins in this hack-and-slash action adventure.

Explore an open, living world and use your whip and magic to restore the balance between good and evil.

Yooka-Laylee, on the other hand, is a 3D platformer developed by some of the key figures behind the Banjo-Kazooie series.

Explore vast, beautiful worlds and meet an unforgettable cast of characters. As a buddy duo, Yooka & Laylee, you embark on an epic quest to discover the corporate villain, Capital B, and his devious plan to absorb all of the world’s literature, to thwart.”

Lost Planet 3, a prequel to the original two games, is the final installment in Capcom’s third-person shooter series, while Garou: Mark of the Wolves is a 2D fighting game developed by SNK.

Picking a winner is difficult in August, especially since the standards are much lower than normal.

plants vs. Zombies: Battle for Neighborville and Garou: Mark of the Wolves are the top-rated games on Metacritic, both scoring 77%.

Hunter’s Arena: Legends does not have a Metacritic score, but it does have mixed reviews on Steam. With this in mind, I give the win to Microsoft for August – but only!

Fortnite Downtime Season 8: How Long Will Fortnite Servers Be Offline Before Update?