How about the “Guests to the East”, which was recommended by iOS appointments and was expected by 700,000 people across the network?

GameLook report / “I will enter the East without regrets in this life, and I would like to enter Gensokyo in the next life.” If you are a user who has been in the pit for a while, even if you are not a fan of the East, you must have heard such a sentence from many places. .

For a long time, the two-dimensional doujin world has been circulating the term “three miracles of the same person”, which refers to “True Moon Tan Yueji”, “When Higurashi Cried”, and “Touhou Project”. Among them, the most successful commercialization is “FGO”, another IP derivative of TYPE-MOON, the company behind “Tsuki Hime”.

However, last year, there was also a second-creation turn-based RPG mobile game “Eastern LostWord” based on the “Eastern Project”, which also achieved good market performance after landing in the Japanese market. No. 1 on the iOS free list and TOP10 bestseller list in Japan.

Recently, GameLook discovered that the Good Smile Company (良笑社), which is famous for its animation figures in Japan, and NextNinja, who is good at RPG, jointly developed the “Guests to the East”, and announced that it will open Android limited edition in China on August 12. File deletion charging test.

In fact, before this, the game has opened reservations in major domestic channels, and now it has also obtained 8.4 points for station B, with 310,000 reservations, and a good score of 8.4 points for TapTap and over 140,000 reservations. Along with the high expectations of 700,000 reserved players across the network, the official is also responding to players’ calls with heart. Not only will the test be opened again in the near future, but the game successfully won the version number as early as June this year. 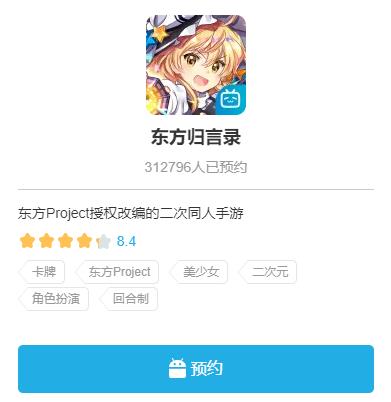 It is reported that it took less than 9 months from the publication of the agency information to the issuance of the import version number, and the speed was surprising. Regardless of the product quality that has long been verified by the market, or the official attitude of attaching great importance to players, people can’t help but look forward to the arrival of the national service of “Guo Yan Ji Lu”.

The miracle of the fandom, the super IP that radiates multiple fields

Whenever we mention “Touhou Project”, we have to talk about the author ZUN (Ota Junya) and his “Shanghai Alice Magic Orchestra” first.

What’s interesting is that although it has the word “Shanghai”, it is a real Japanese society. ZUN has also explained this: “Shanghai” is a city where Eastern and Western civilizations merge, and the name “Alice” also implies a fairy tale. The name “Shanghai Alice” represents the fusion of Eastern and Western fantasy, and the “Magic Orchestra” is derived from the music fan group ZUN originally wanted to develop. 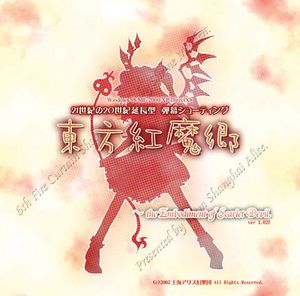 But more importantly, thanks to the origin of the fan club, ZUN basically maintains a tolerant and non-interference attitude towards fan creation. If things go on like this, more and more fan clubs have widely participated in the second creation and become the biggest highlight of the Oriental series. The Oriental IP with countless fans has gradually been called the top of the “three miracles” of the Japanese fandom.

Because of this, we now mention the “Touhou Project” again, which refers more to a super IP that covers many fields such as games, animation, music, literature, and many second-creation works.

Today, the games, books, music and other works derived from Oriental IP have a history of 25 years. There are as many as 79 games available on Steam alone, ZUN has also released 10 music albums, and the number of clubs that create fan music is over 10,000, including EastNewSound, Shibayan Records, Alstroemeria Records, and so on.

Based on the rise of the Internet and the two-dimensional culture, this oriental craze has not completely stopped in Japan, and the domestic oriental fan culture is also becoming more and more prosperous. Over the years, many excellent fan works and societies have also emerged, forming a large-scale group.

For example, the well-known domestic society TsuBaKi officially released the theme CD “Red-KURENAI” on “tho07 East China” on August 7, 2016, and has released 9 Oriental fan music CDs and one Original music EP; or the active 4C-Fantasy, Alice Workshop, AsparTateRecords and other groups. 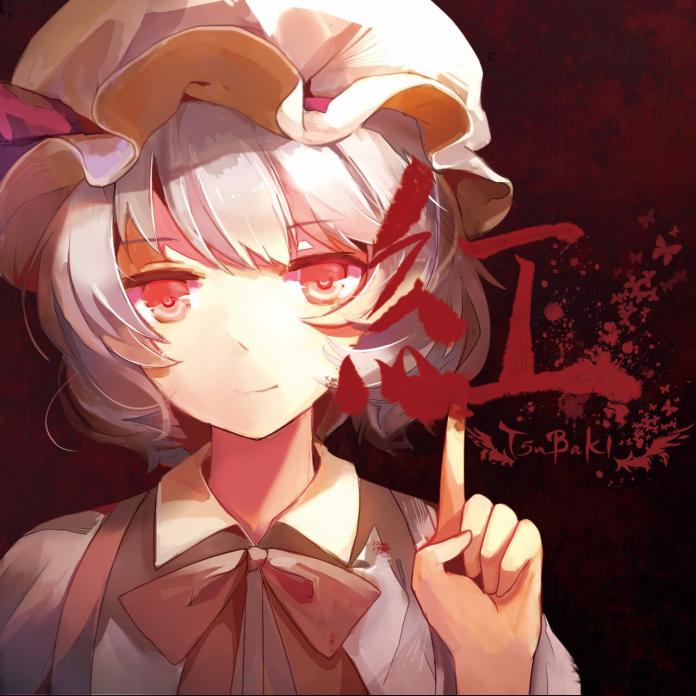 Although there are not a few outstanding fan clubs and works in China, to a certain extent, it is still difficult to escape the status quo of “enclosure and self-advancement” by minority fans. To this day, this classic IP still lacks commercially successful boutique products and attracts more new users from the circle.

However, in Japan, where it originated, last year there was an excellent performance of “Oriental LostWord (Oriental Return to Words)”, which achieved nearly one million downloads in the first month and an excellent performance of over 100 million monthly sales. After experiencing the test of the Japanese market, the game now enters the country under the name of “fantasy journey immediately”, which is bound to set off a new wave of oriental craze in the fandom and even the entire two-dimensional circle. 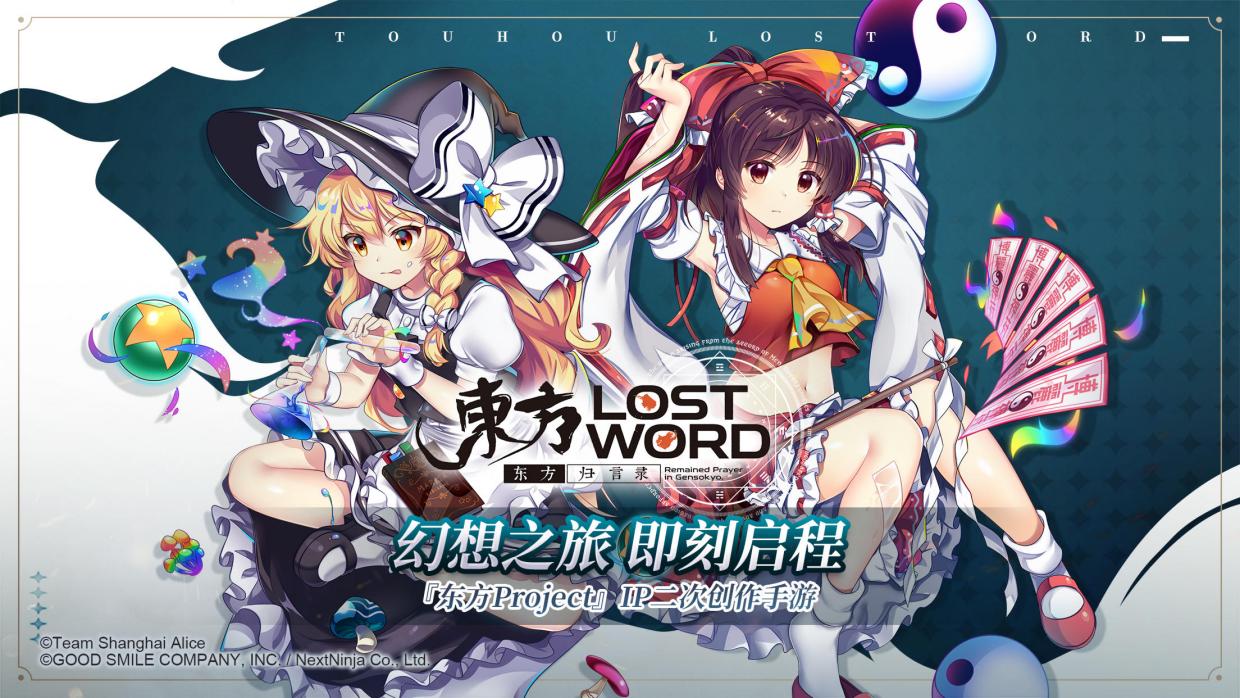 Only understand players can attract players

It is true that such a judgment is not without a target. From the perspective of “The Return to the East” itself, it is actually not difficult to understand its achievements. To put it simply, as a second-generation mobile game, the game clearly captures the core of the Eastern player’s preferences-characters and music.

You know, ZUN has created more than 100 Eastern characters so far, and each has a unique personality. This number does not include a large number of second creation works. In this work, Gensokyo has undergone a huge change due to “LostWord”. In order to solve the abnormal changes, a large number of characters in the “Touhou Project” will gather together to start an adventure again.

In addition to Hakurei Reimu, Gigure Marisa, Yakumo Shi, fan-famous Gensokyo characters will appear one by one. Not to mention, in order to further cater to each player’s understanding of the role, the game provides three dubbing for each character, allowing users to find their favorite characters and switch at will. 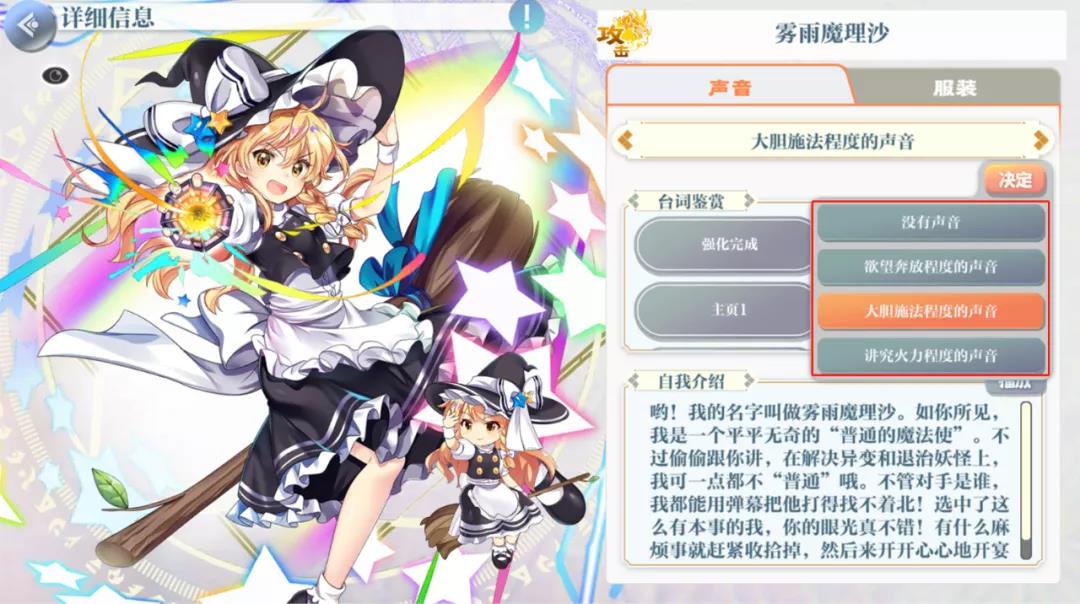 And this deep understanding of the role is also reflected in the core gameplay of the game. “The Return of the East” also made innovations in the traditional card gameplay, that is, each character has no star rating and has its own characteristics. Not only that, the more than 200 exquisite illustrations brought by the game’s unique scrolling system not only depict the intimate bond between characters, but also add different attribute blessings to enhance the ability of the character’s spell cards.

The resulting strategic elements such as attribute restraint and team collocation also bring a unique experience to the game’s new turn-based combat based on barrage gameplay.

It is said that to make players love, you must first understand the players. Behind the “Touhou Project” that continues to attract fans, in addition to many distinctive Gensokyo characters, music is also one of the most distinctive labels on Touhou IP.

“The Return to the East”, which originally has the “two creation genes”, naturally understands this, and specially invited Foxtail-Grass Studio, Melodic Taste, はちみつれもん, 梶梶小件店, Ototome, etc. The Eastern Fan Club participates in the production of music. At the same time, through the way of customizing music with different characters and themes, the game music section will be gradually improved with the rhythm of a new song MV every month. 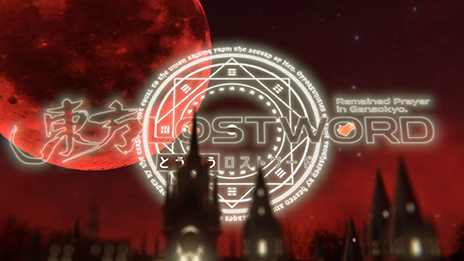 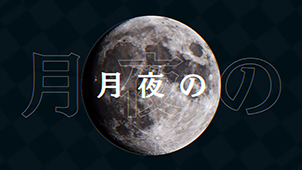 In addition, the game will create a new Gensokyo story based on the original Eastern worldview. While the classic characters and music bring pure “Oriental flavor” to fans, the brand-new story can also become another opportunity for “Oriental Project” to attract new domestic users and continue to give vitality to this classic IP.

How to get rid of niche identities? 25 years of IP facing new challenges

IP has a great reputation, but its influence is limited-the “Oriental Project” is currently facing difficulties in its domestic development.

In recent years, as the domestic two-dimensional culture has become more large-scale and mainstream, more and more two-dimensional IPs have become popular, and the number of users has also increased sharply. On the other hand, Eastern IP, which became popular early, still stays in the carnival of small circles, and the user growth in these years has been a bit weak.

But from another perspective, as an enduring two-dimensional series for more than two decades, the appeal of “Oriental Project” goes without saying. In a sense, the expansion of the domestic two-dimensional market also means that Oriental IP will have a larger potential user base.

Then there is only one problem. How to quickly break the circle and let more general users feel the core charm of the East has become the biggest challenge for attracting new users.

As the old saying goes, the smell of wine is also afraid of deep alleys. Nowadays, compared to the PC platform where games were released intensively in the past, mobile games with a wider audience are undoubtedly the best choice to break the circle.

From the current point of view, the success of “Oriental Homecoming”, which firmly grasps the two major elements of character and music, in the Japanese mobile game market has proved that the game is attractive to core players and general users.

It took less than nine months for the national service to get the version number, which shows how much the agent Fangyuqi network attaches to the game. On this basis, the national service has also been optimized and adjusted one by one for the only one-time first draw mechanism, no social function, and automatic sweeping of irrelevant cards in the Japanese service and the international service, in order to maximize the adaptation to the domestic mainstream. Player habits. Now the opening of a new round of internal testing also means that it is getting closer and closer to the official launch node of the “Oriental Homecoming”. It is foreseeable that the success of the first second mobile game based on the “Orient Project” in the future may attract more Oriental mobile games or other works to be launched, and continue to expand the influence of Oriental IP in the country.

Capcom Celebrates Birthday And Fans May Have Some Hope