Earlier this week, MGM gave their showcase at the annual CinemaCon in Las Vegas. Aside from the studio remaining committed to a cinematic release on September 30 in the UK and October 8 in the US for No Time To Die, those lucky few in attendance were able to see nine minutes of opening footage from the James’ pre-title sequence. Bond movie. WARNING: SPOILERS FOR THE OPENING OF NO TIME TO DIE.

According to a description reported by Screen Rant:[Sound is muffled at the start of the scene]. Bond is on the floor, hurt.

“He wakes up and takes his phone out of his jacket pocket. He starts running down the street and towards the bridge [from the trailer], chasing a teenager.

“A car approaches from behind and tries to run over it, but Bond dodges it by taking cover behind a small rock before jumping off the bridge when a motorcycle approaches. [We see this scene in the trailer].

“When he lands under the bridge, he starts running through the city. He tackles the motorcyclist and fights him one-on-one, killing him. But before he dies, the motorcyclist reveals that Madeleine is the ‘daughter of Spectre’.” 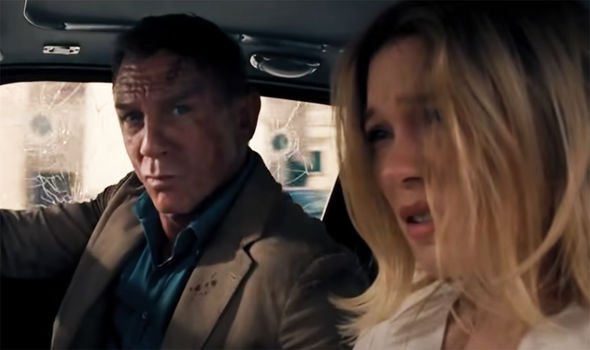 James Bond and Madeleine Swann in the Aston Martin DB5 (Image: UP)

The description continued: “Bond grabs his bike and rides it around town, culminating in his bike jump off the trailer. He leaves the bike and goes to a hotel room, it seems.

“The doorman says something about Bond’s wife. Bond sees Madeleine and says, “You’re right. Letting go is difficult.’ She replies, “James, what happened?”

“He and Madeleine leave and get into their Aston Martin. “I have something to tell you,” she says. Bond replies, “I bet you do.” Bond drives through town again and tries to escape. Madeleine gets a call.” 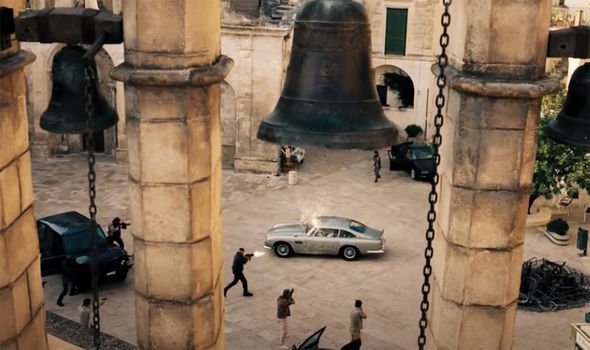 The DB5 surrounded in the opening of No Time To Die (Image: UP) 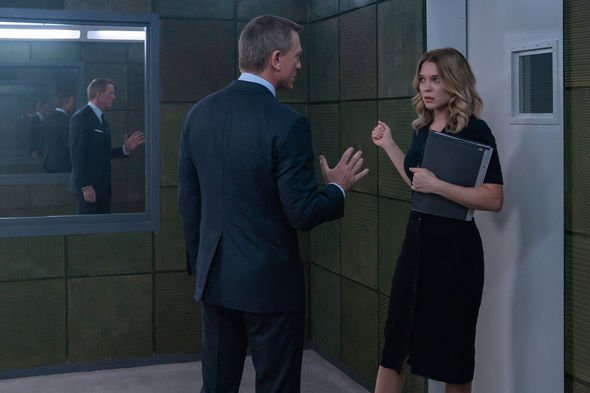 Bond and Swann reunite in No Time To Die (Image: UP)

In the rest of the description, Bond tells Madeleine to answer the phone before he does.

A voice on the other end says, “Your father would be so proud of you. Your sacrifice…[it tails off].”

A shocked Madeleine tries to reassure Bond, in footage seen in previous trailers where she asks, “James, why should I betray you.” Before 007 replies, “We all have our secrets. We just haven’t gotten to yours yet.”

As they speed along in the DB5, Bond unleashes mini spiked bombs from the rear to take out a car chasing them.

Madeleine says, “James, listen to me. I’d rather die than…” But before she can finish, the DB5 is hit by another car and they are surrounded in an open square, as can be seen in the trailers.

While Bond is being shot, Bond just sits there before Madeleine yells, “James, do something! Say something, James!”

After processing Madeleine’s possible betrayal, he says, “Okay, before you put a donut in the DB5, shoot all the enemies – as seen in previously released footage – before you escape.

This opening scene was shot about two years ago in Matera, Italy and what Madeleine supposedly did is a big mystery in No Time To Die, with a connection to Rami Malek’s Safin and Specter.

From previous trailers, it looks like there’s a big time jump after the opening scene. Bond and Madeleine appear to have broken up before he retires as 007 and moves to Jamaica.

But when recruited by CIA agent Felix Leiter, Bond returns to MI6 in London and is reunited with Madeleine when he visits Blofeld in prison. What happens next, we’ll have to wait and see in the movie when it finally releases.

No Time To Die opens in UK cinemas on September 30, followed by the US on October 8.

Predator Arc A770 Graphics Card is Now Displayed by Acer