The person in charge of Microsoft’s independent games shared: Talking about money is not tacky, three ways of financing!

Making and selling games is essentially a commercial activity. Even independent games created by producers according to their own preferences cannot escape this rule. If you rush to develop a game without thinking, you may be in trouble. Therefore, it is necessary to think about how to obtain development funds and how to make games profitable, so as to develop independent games into a business. 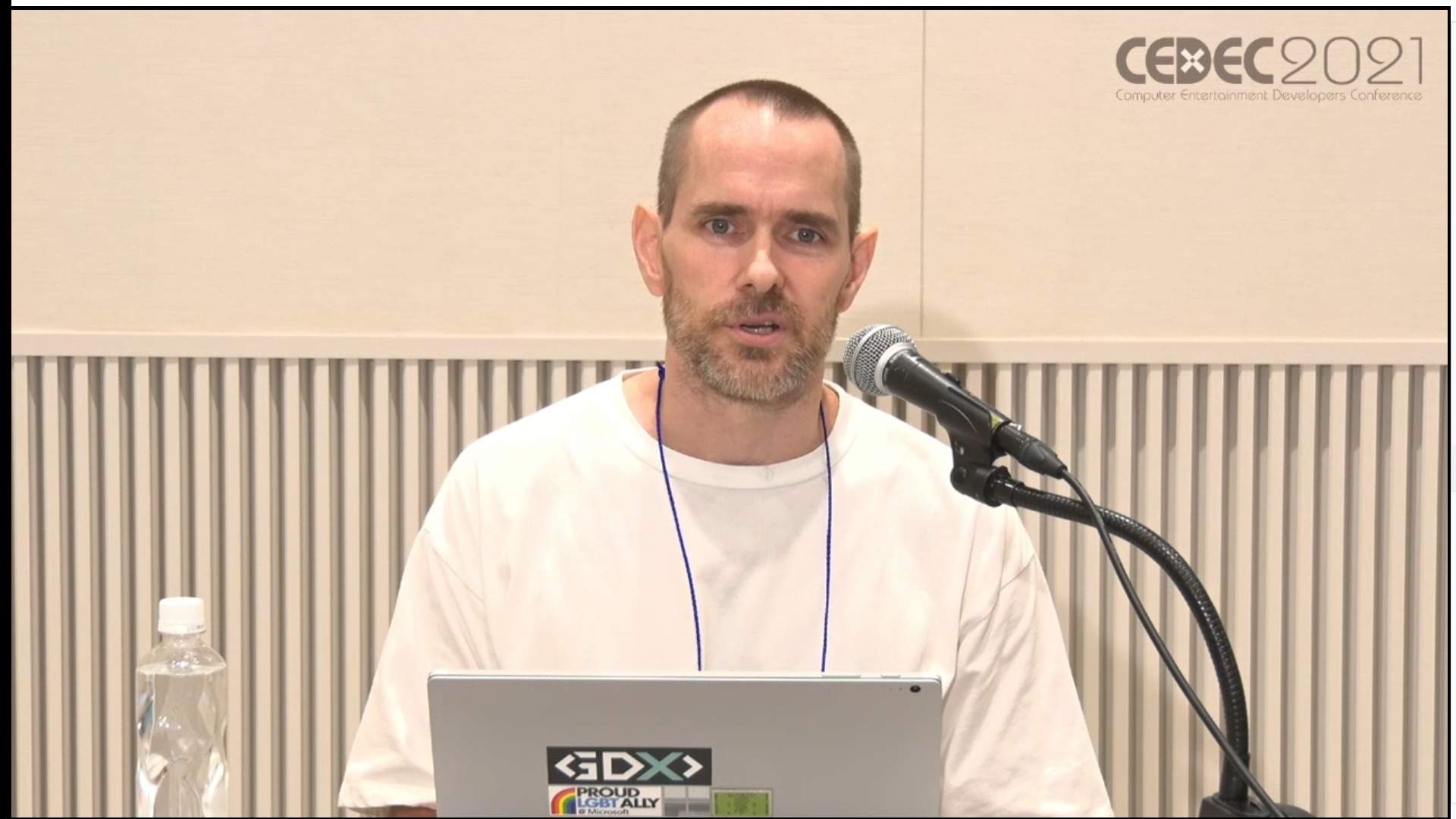 Matt Smith entered the game industry as a programmer in 2001. He has worked in Pop Cap, EA and other companies. Now he is the independent game leader of Microsoft and has participated in projects such as “Plants vs. Zombies” and “Weather Vane”.

On Smith’s PPT, the phrase “Gray Art: The Business Basis for Developing Independent Games” was written. The so-called gray art is the secret hidden in the industry. 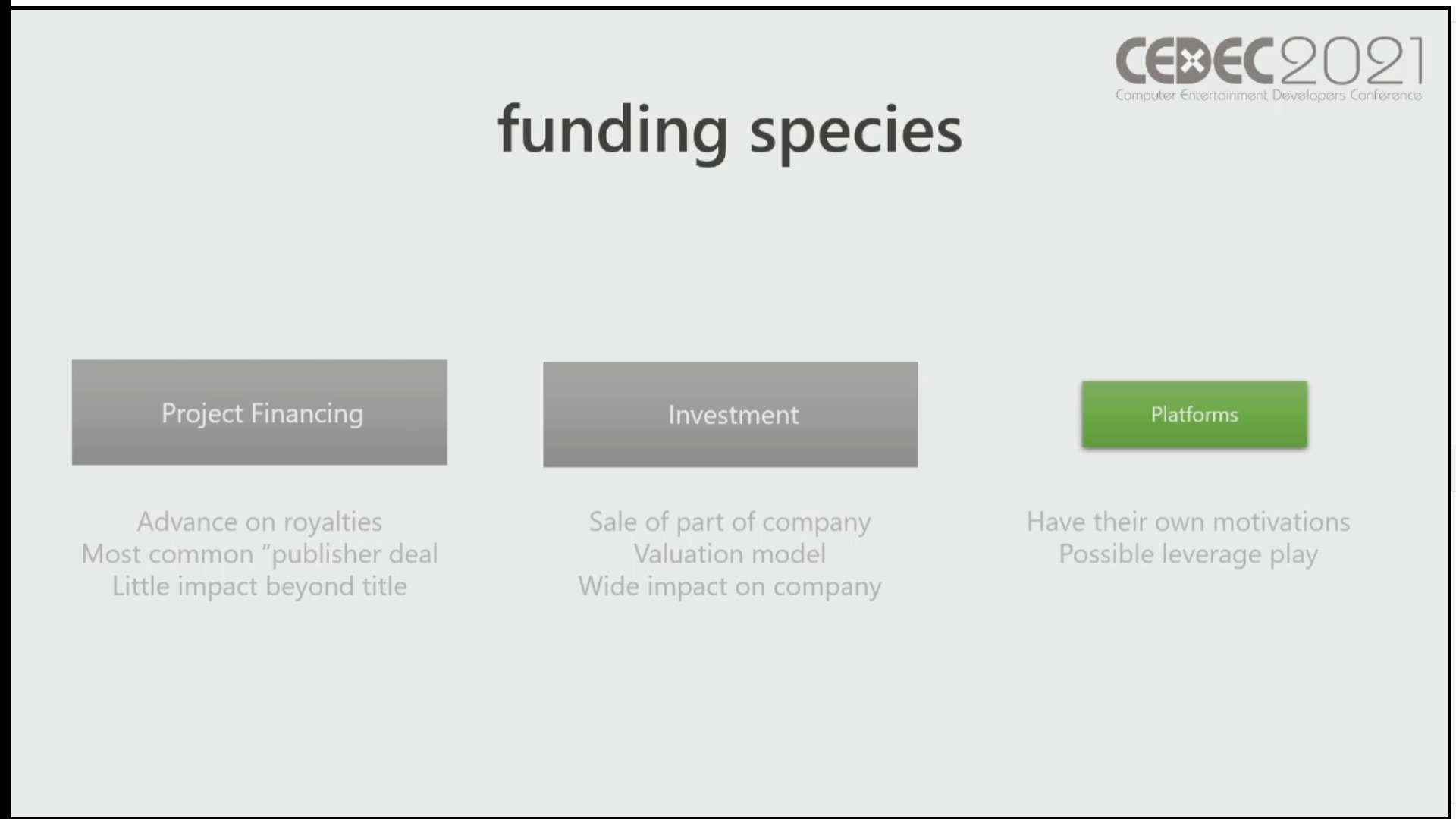 There are many ways to raise money. In his speech, Smith introduced three ways. 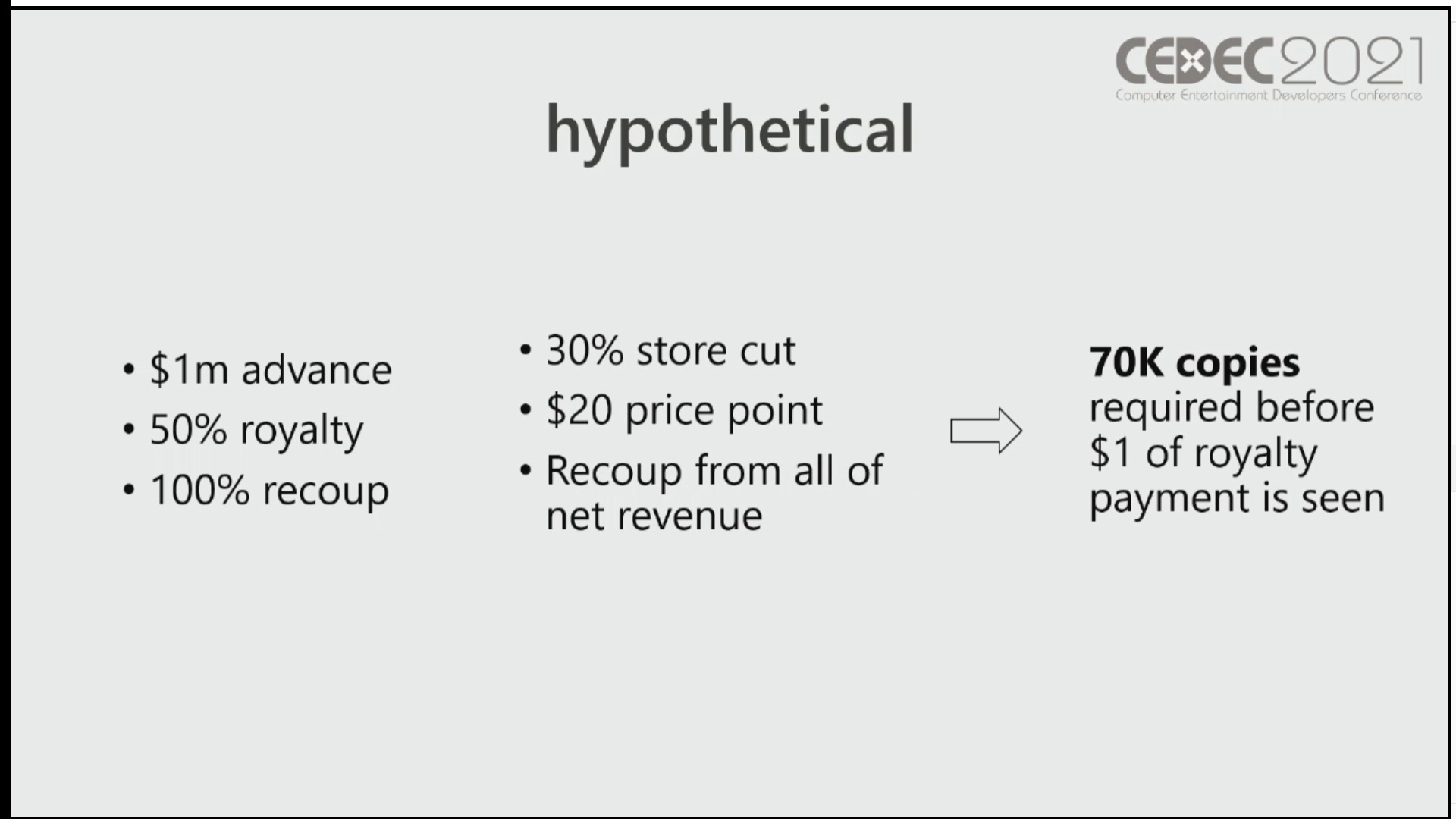 1. Project financing. Point to game publishers to raise funds, develop games, and repay debts with sales after the game is released.

This is a way of reconciling future earnings and funds on hand. For project financing, each piece of work needs to be submitted to the publisher and negotiated with the publisher, so be careful to ensure that your company is not led by the nose during the negotiation process. In addition, publishers can also provide marketing, quality assurance and other services, which is a great advantage.

For example, a project raised $1 million (approximately 6.46 million RMB), which can be used by 5 developers for about 2 years. The contract stipulates that the developer needs to transfer 50% of the copyright to the publisher, but it is agreed to redeem all the copyright after paying off the advance payment. The game is priced at US$20 (approximately 129 RMB), of which 30% is a platform commission.

Based on this calculation, the game needs to reach 70,000 sets of sales before developers can redeem the copyright. Although 70,000 sets may not seem like a big number, the average sales of games on Steam is only 4000~5000 sets. 70,000 sales are already considered a hot game. This contract goal is obviously quite challenging.

The contract conditions for redemption of copyright are varied, and some contracts are more stringent than this example, and the possibility of failing to meet the standards is greater. When financing issuers, these conditions must be calculated carefully. 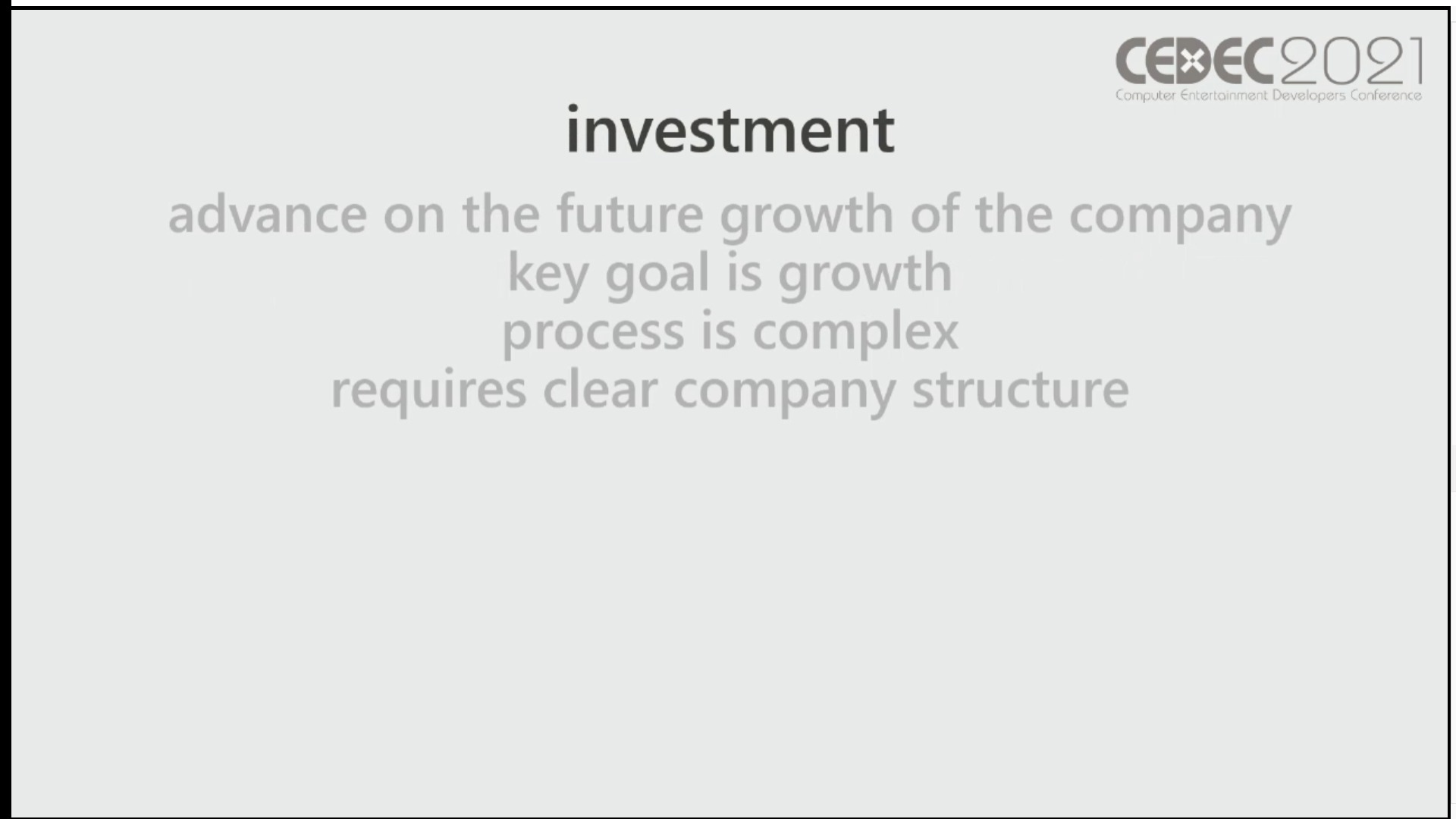 Under this financing model, investors require the developer’s company to further develop and add value. There are many complicated procedures that require the participation of lawyers. Developers must prove to investors that the company has investment value, so it is necessary to hold a board of directors to explain the company’s profitability and operating methods. Some well-known game developers do not want to be pointed out by outsiders after they become independent, so they will not choose this financing model. Compared with the first two financing models, this is more like a way for the platform to strengthen itself to provide related services. Therefore, there are many options for this model, such as exclusive or pre-sale. The contract specifications for each approach are different.

If a contract is signed with the platform party, it will generally take a one-time settlement of all funds. There is no need to surrender the copyright or generate investment recovery. The possibility of contracting financing with multiple platforms can be regarded as one of the charms of this model.

The specific process of financing 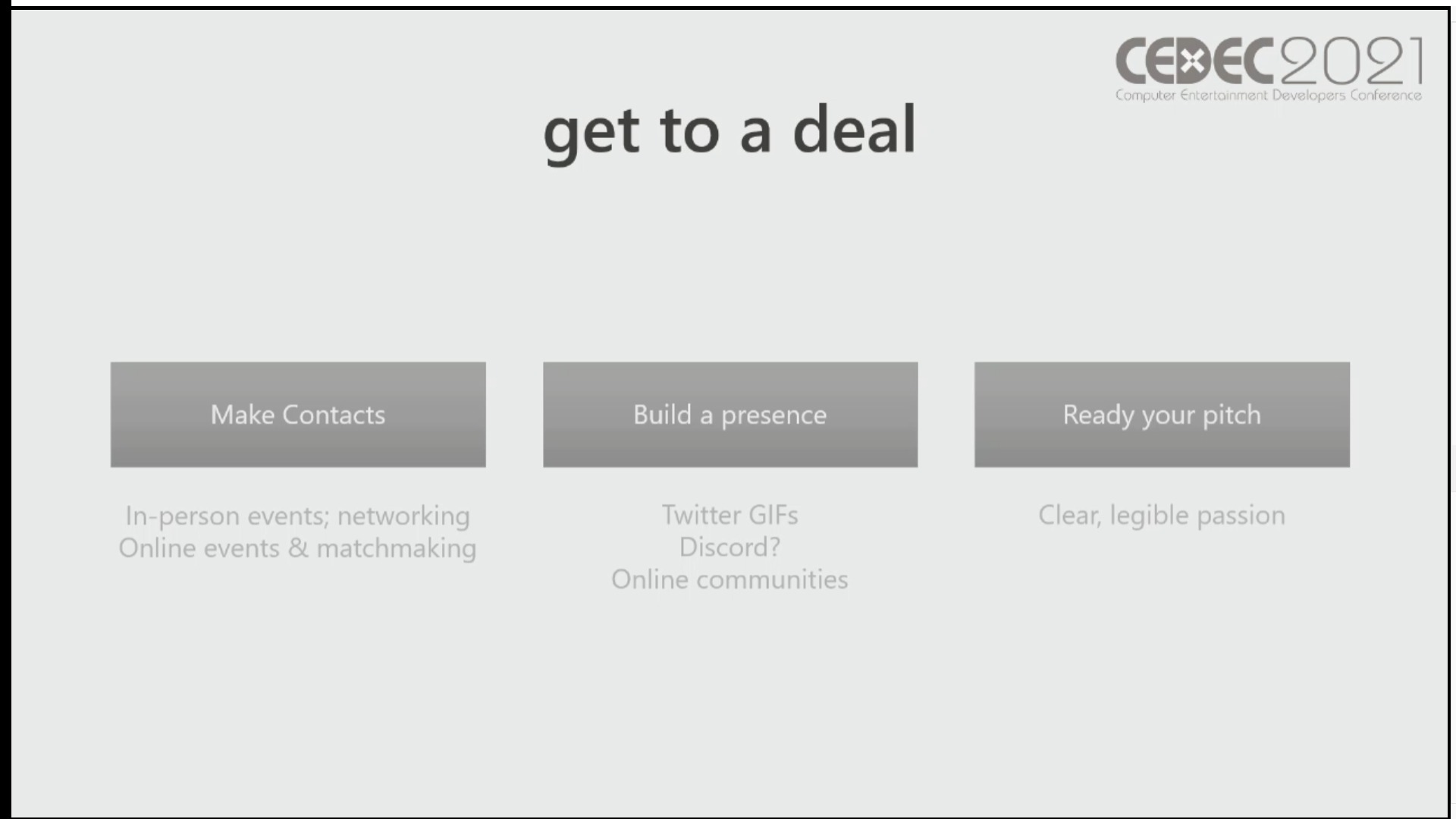 1. Contact. Attend developer conferences such as GDC and BitSummit to make acquaintances; or participate in online activities paired with developers and publishers.

2. Demonstrate a sense of existence. Publish screenshots and animations of the game on Twitter, or set up a game community on Discord to attract attention from all walks of life.

3. Summarize the selling points of the game and make promotional slogans. Smith said this is a top priority. This expresses the developer’s intention to make the game and the charm of the game. The most important thing is that this can convey the emotions of the game to the players in a simple and understandable way. 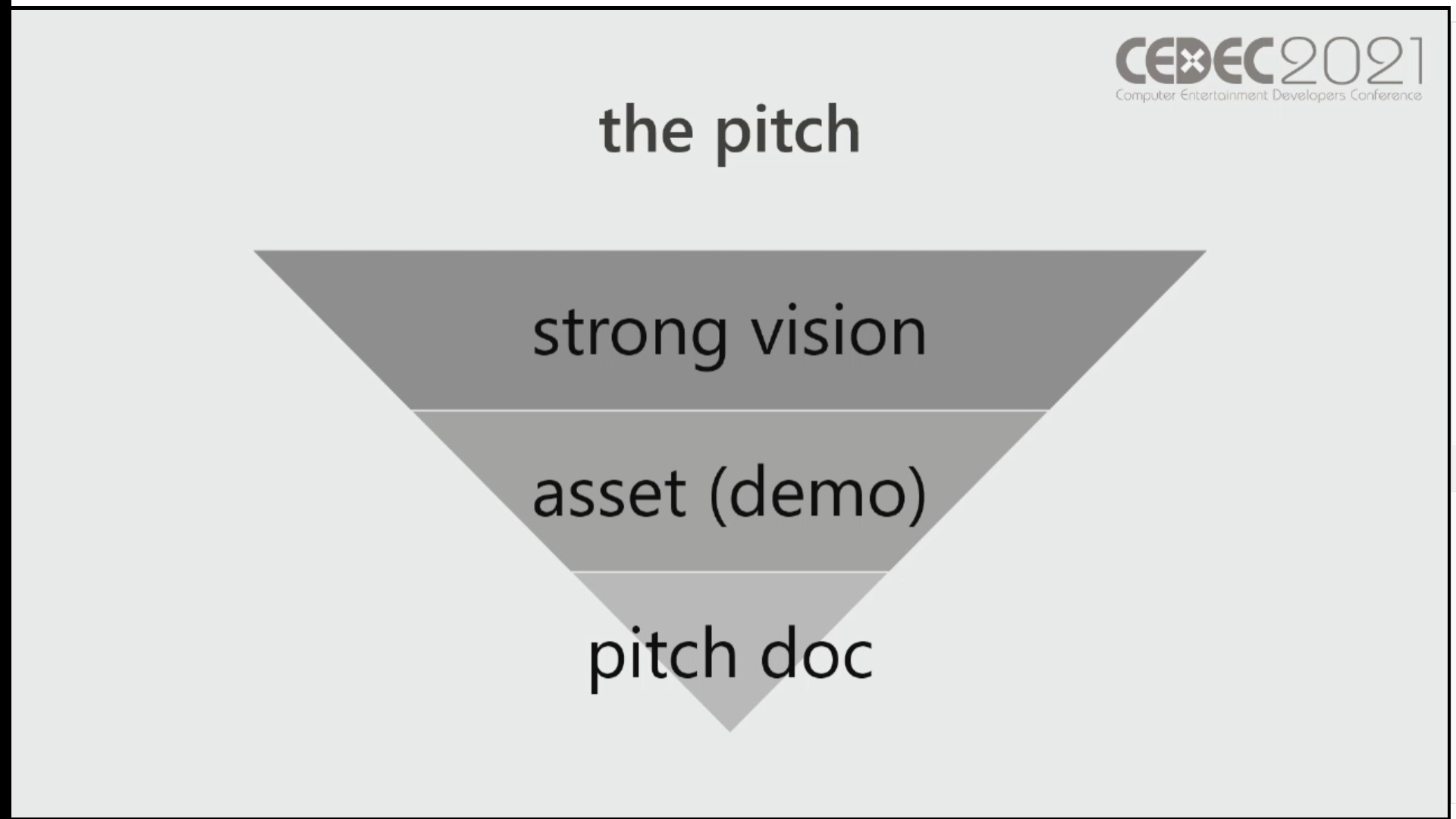 When creating a slogan, we must make people able to express their meaning and unfold concrete imagination. The easier it is to understand the slogan, the more able it is to motivate investors to contribute. Of course, creating promotional slogans is also a very time-consuming task.

The game Demo is also very important. If the game prototype or trial version is very interesting, it can attract more attention. If you are using Unity or Unreal Engine to develop the work, the game prototype will be able to display very well. In addition, game media are exposed to a large number of game demos every day. Therefore, the demos that are pushed to the media must not only have strong gameplay, but also be differentiated from other works.

Secondly, documentation is also very important. In the information, in addition to expressing the selling point of the game and the difference from other games, it is also necessary to clearly list the game’s development cycle, development budget, and staffing, so that it is easier to persuade the publisher to invest. It is worth noting that when explaining the budget, do not make conservative or rough estimates, but settle the accounts. The key to financing is money. If the required funds are not clear enough, it will be difficult for both parties to make progress in negotiations.

Even if it enters the signing stage, everything will not be all right 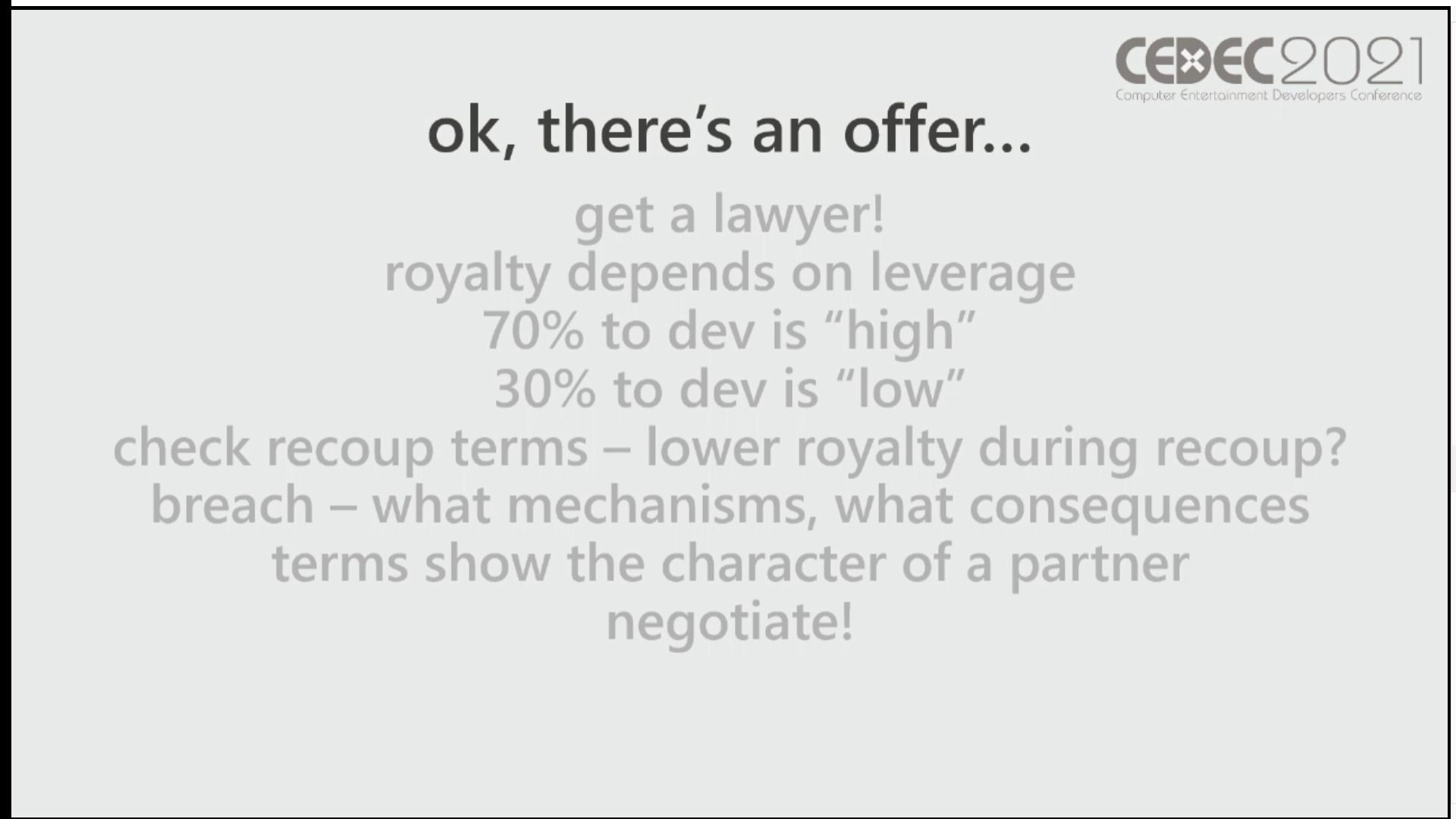 When entering the contract phase, the most urgent thing is to hire a lawyer. Although it costs a lot of money to hire a lawyer, it is definitely worth the money. Lawyers can help developers check malicious terms and estimate whether the partner company is bad assets. In addition, you should not leave all issues to lawyers, you also need to learn and master certain legal knowledge.

When project financing, copyright ownership varies. If the developer scores 70%, it is considered a very high proportion, otherwise, 30% is extremely low. However, if the development is 3A, 2A works, 30% of the copyright income is also considerable. Copyright ownership will be affected by a series of conditions, so developers need to calculate carefully to confirm that the funds can operate smoothly. In addition, there are also negotiation methods such as increasing the proportion of copyright ownership after the investment is recovered.

Similarly, the developer must also take into account the non-performance of the contract by the investor. For example, if the development progress has not caught up with the node, or there are major flaws in the game, or the publisher does not accept the phased project results, it is determined that the development has failed, and various problems will cause the contract to become invalid.

When the above situation occurs, the issuer is likely to fail to perform the contract to protect the principal. The contract has become a dead letter, but these nodes are when independent games need the most funds, which will lead to the end of the project.

It can be said that the contract reflects the character of the other party. If the other party proposes aggressive clauses or sets up a contract trap, he must negotiate with him with extreme spirit to ensure that the success rate rises while signing a reliable contract. If you encounter particularly harsh terms, it is difficult to ride a tiger, it is difficult to sign a contract, and deliberate delay is also a feasible negotiation strategy.

Plan the next work while developing the game 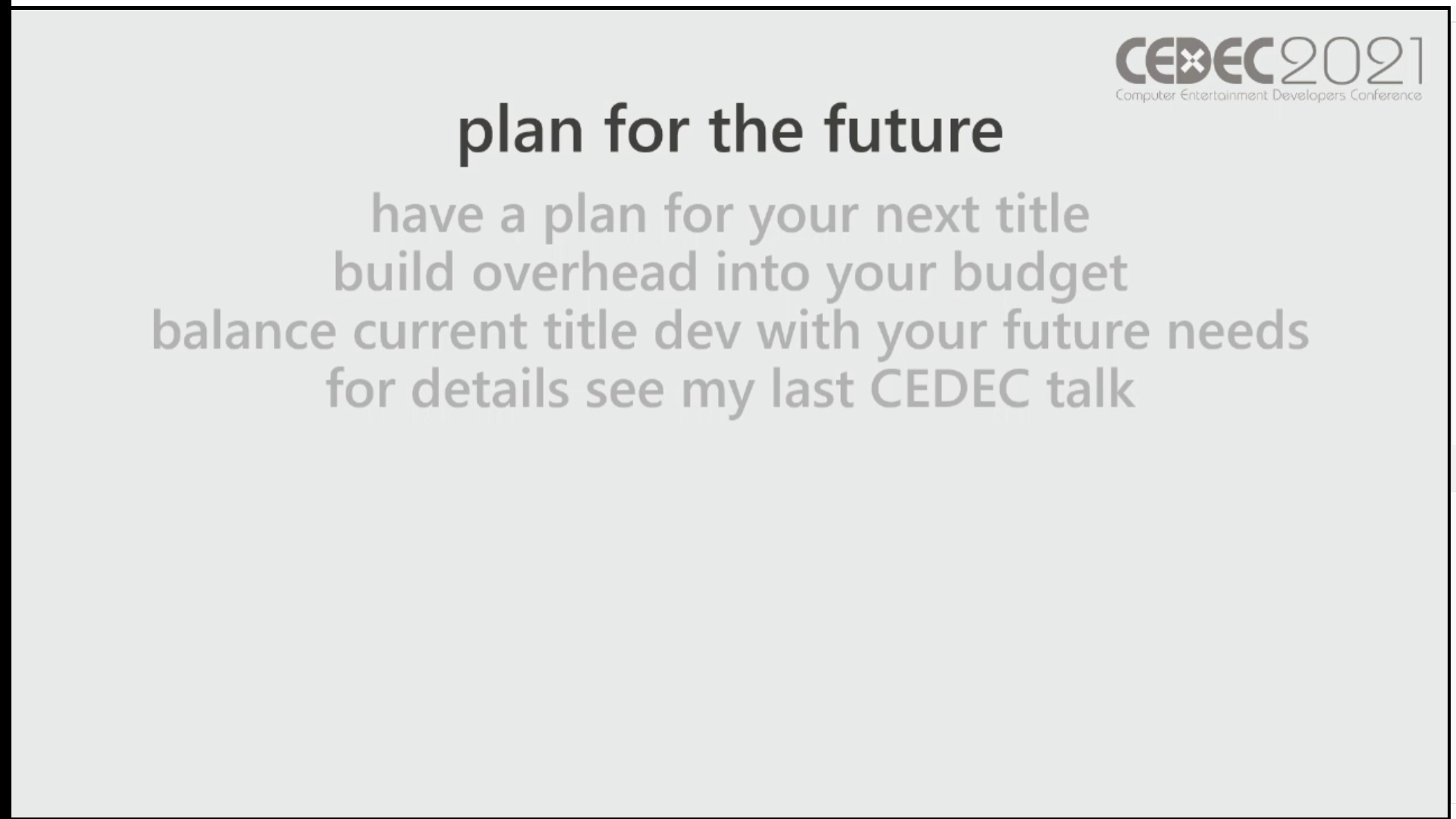 Smith said that after experiencing the above-mentioned difficulties, developers must also plan ahead. It is very important to plan to develop the next work at the financing stage. However, there are few discussions in this area.

If you want to become a professional developer and continue to make games, you should not only look at the products in front of you, but also consider the development of your entire career. However, game development takes a lot of time, and funds need to be covered to the window period of project development.

Simply summarizing the selling points of the game and creating a promotional slogan often takes six months to one year. If the development cost of the next work is not reserved, subsequent development will be difficult. Whether the game can become a hit is unpredictable. Therefore, budget planning must be kept in mind from time to time.

Finally, Smith said that clearly expressing the game’s genre, audience and other elements, and communicating it to the publisher and the media, is the key to good results. In addition, understanding the charm of your own works can help developers produce better works.

Xbox News: Throw Down Today with Lost Judgment on Xbox One and Xbox Series X|S

Hardest games ever: Dark Souls, Battletoads, Ghosts N Goblins – how many have you beaten?