Developers share: It’s going to be cool after one year of launch. How does this game come back to life in Japan?

GameLook report/In the game market, explosive models and evergreen trees are hard to come by. It is the long-flowing products that really support the industry.

However, many products show signs of decline after they have entered a stable operation stage one to two years after being launched. Players leave due to burnout periods and other reasons, and the product’s revenue performance is in a very embarrassing situation. For large manufacturers with rich product lines and strong financial resources, there is often no good way to use these products.

If it is cut directly, it will not only fail the love of loyal players, but also destroy the efforts of the R&D team; but to continue to operate, the game will not be self-reliant at the commercial level, and the decline of the game will also be a blow to team morale. In addition, China’s game version number is very refined, and it is more expensive to give up a product.

At CEDEC2021, DeNA took the mobile game “Devil 72” as an example, and shared a speech entitled “The essence of mobile game operation methods that make fans enthusiastic”. The game planner Hayakawa Mao and marketing manager Wei Jianren took the stage.

Coincidentally, the DeNA team previously brought its mobile game “Reversal Othello” back to life. (click to read:From dying to doubling DAU, how does DeNA bring “Othello Reversal” back to life in Japan?）

Under DeNA’s magical operation, both games have successfully transitioned to the long-term operation stage and counterattacked. This operation not only gave the R&D team a new lease of life, but also showed the manufacturer’s respect for the players and gave players confidence in the manufacturer’s brand. It is worth learning from the big manufacturers who have the same troubles.

Consider shutting down the service one year after going online? “Devil 72” Deep in the Swamp

Before diving into the topic, GameLook briefly introduces what kind of game “Devil 72” is.

This work was launched in Japan on December 7, 2017. Like “Reversal of Othello”, it is DeNA’s original IP. As the name suggests, this game is a fantasy-themed game of gods and demons, and the gameplay is a typical turn-based RPG.

Players cultivate roles, organize teams, and challenge main lines, activities and instances, which are similar to games of the same category.

One year after the game was launched, active users continued to decrease, and the best-selling list ranked at more than 3,400 annually, which can be described as poor performance. 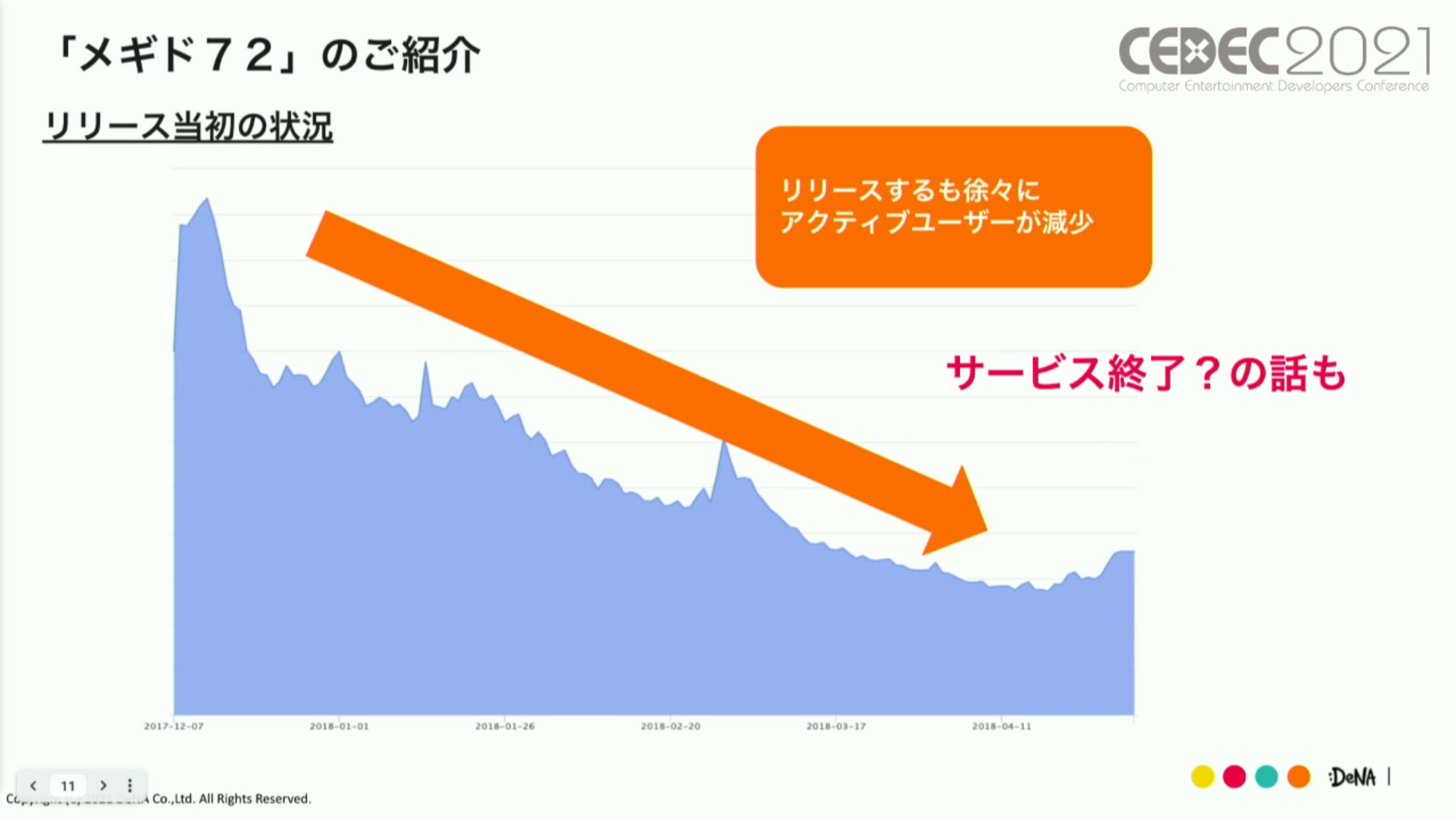 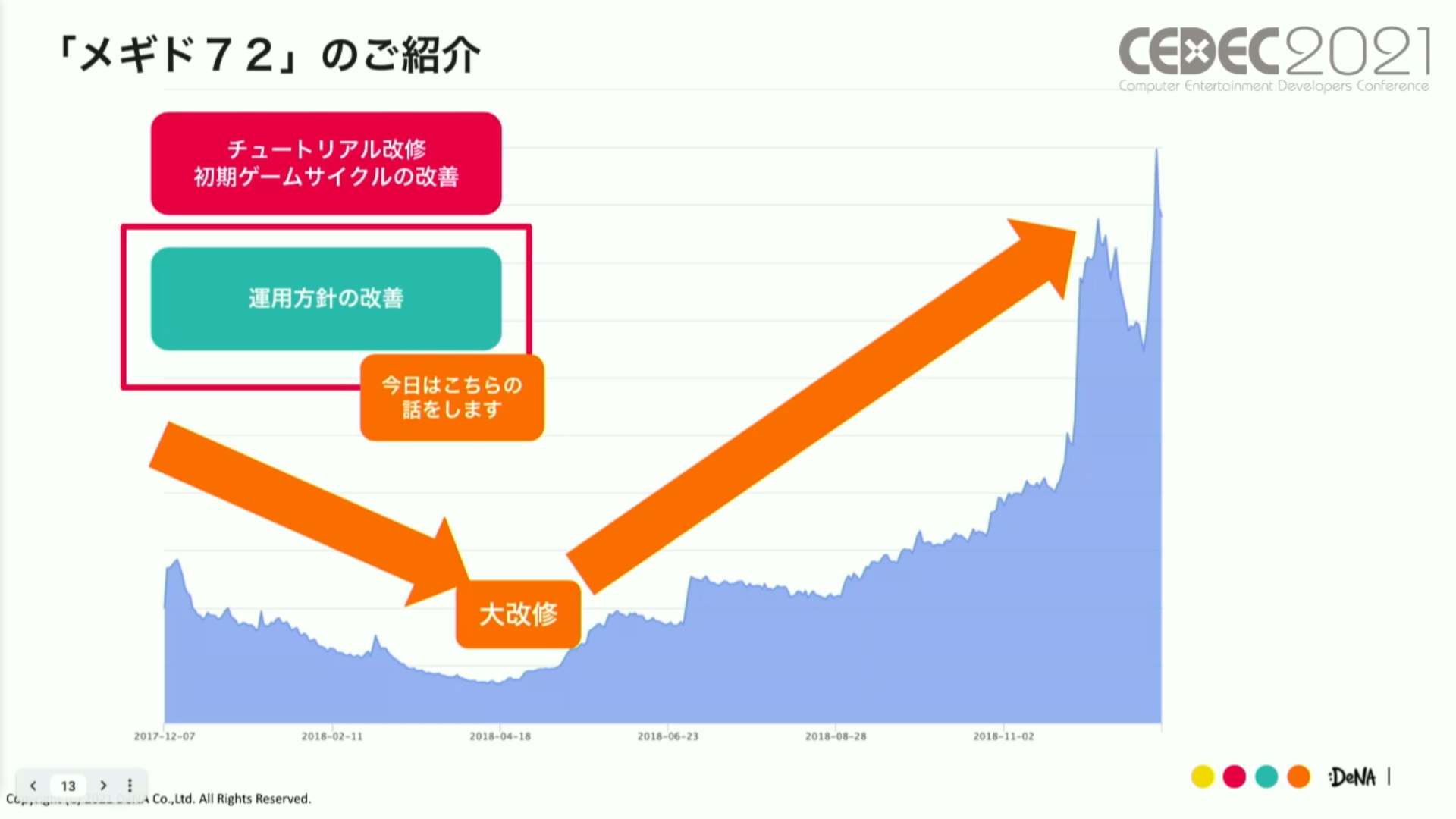 Hayakawa said that during the replay, the team believed that the main reason for the unfavorable start of the game was that it did not fully express the unique design concept of the game.

“Treat all characters equally” is the design concept of “Devil 72”. For example, the game does not divide the characters according to their rarity; the team has designed special actions for each character; the player can play smoothly regardless of which character is the main player. The team wanted to create a highly balanced game.

This kind of concept and characteristic is very rare in the mobile game market. However, when the game was launched, this feature was not fully demonstrated to the players. 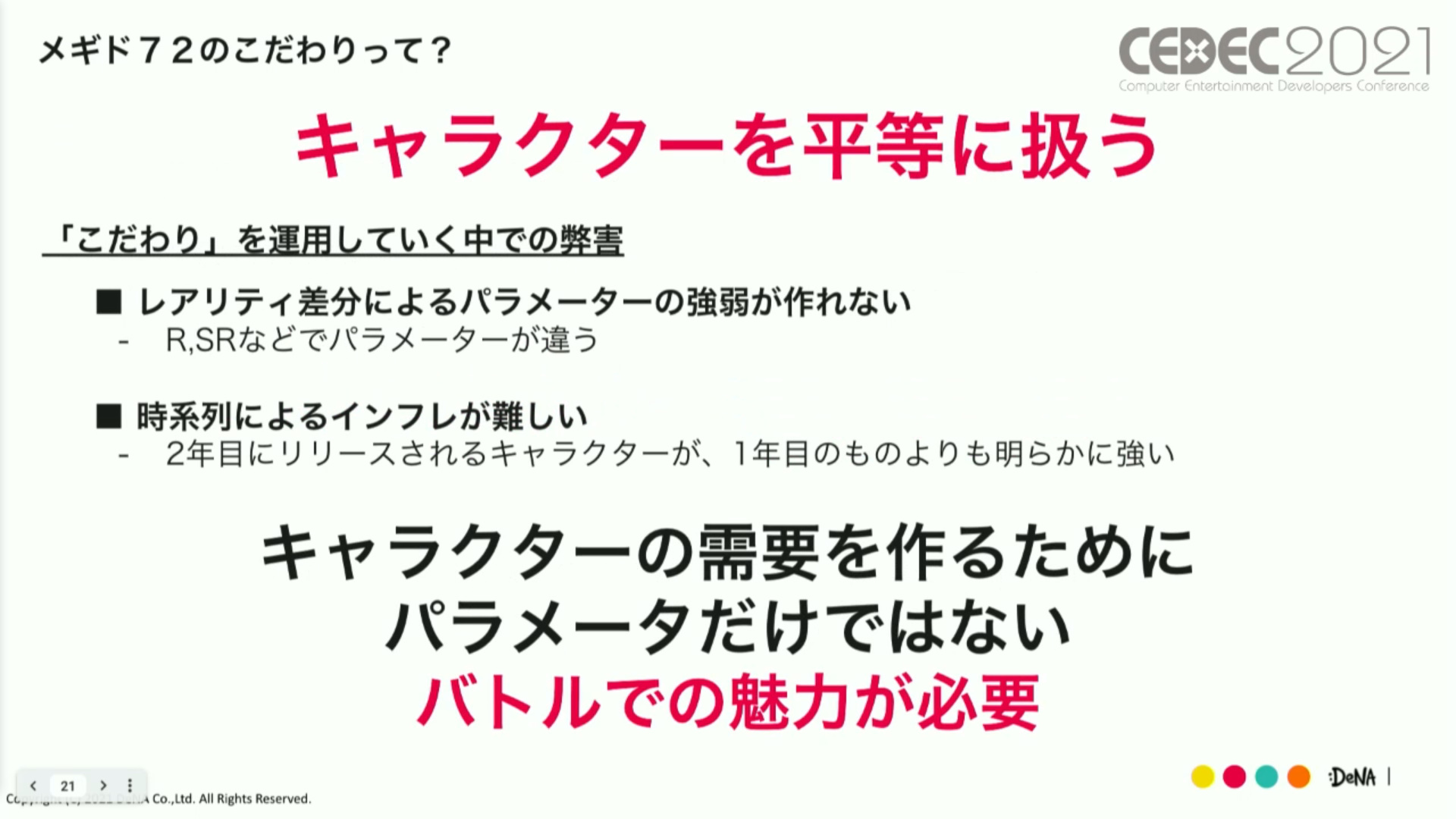 Hayakawa introduced the limitations of this design concept and how to break the game.

This leads to difficulties in shaping the character. In the case of unable to start with the numerical value, DeNA broke through from the combat design, and spent a lot of work on formation and skills. 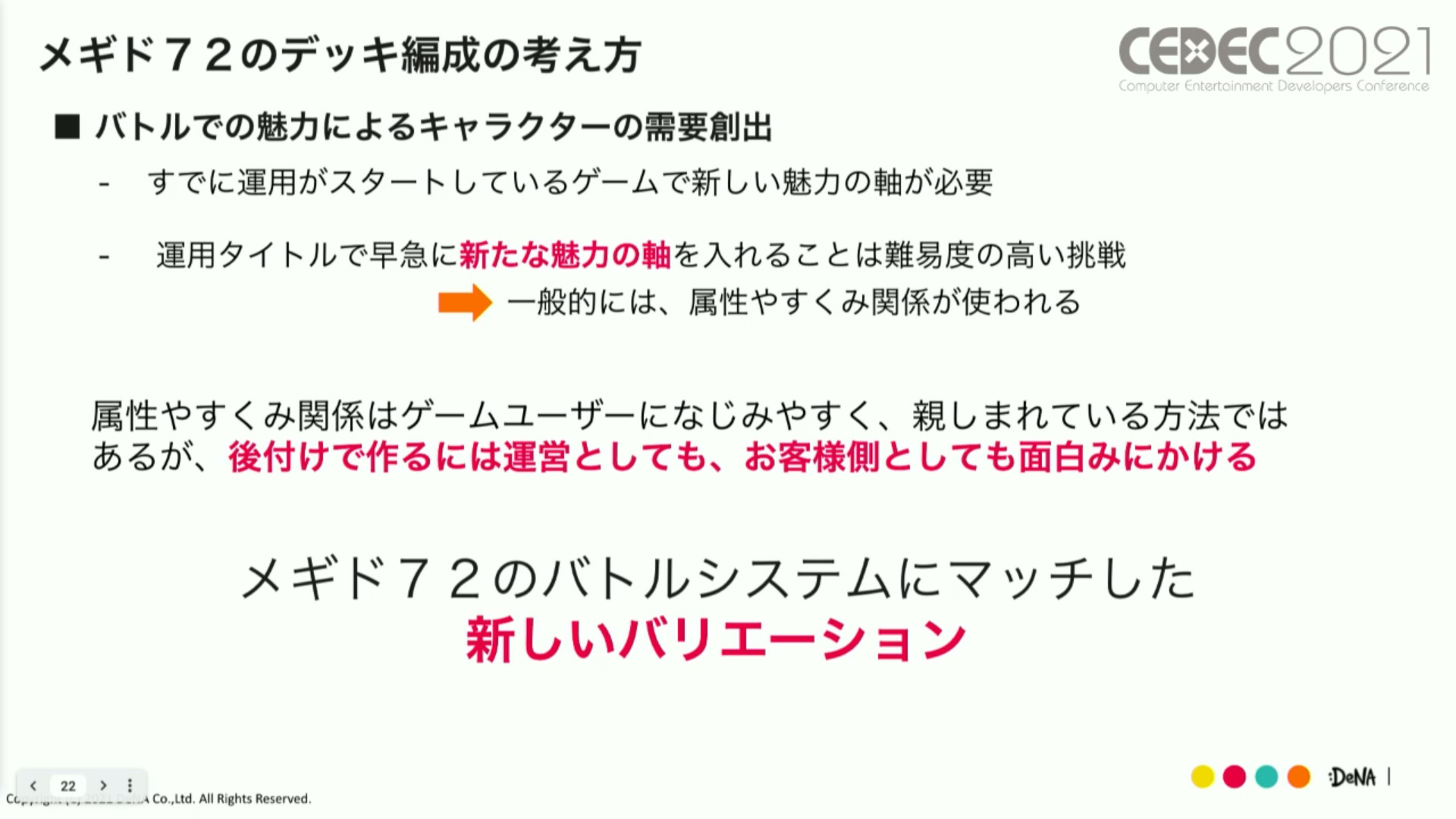 Specifically, it is to design characters with different tactics to enrich players’ formation choices and bring changes to the battle rhythm.

In other words, compared to other games that use art, modeling, or voice acting as a selling point, the core of “Devil 72” falls on a rich strategy. However, the relationship between attributes and restraint is still a relatively simple system. Just changing the attributes of a character does not cause a qualitative change in the way the battle is played. Players are also easily bored. DeNA modifies the game by adding new combat elements, analyzing the usage rate of characters, and allowing players to feel the changes in the battle rhythm and enhancing the fun of the game. 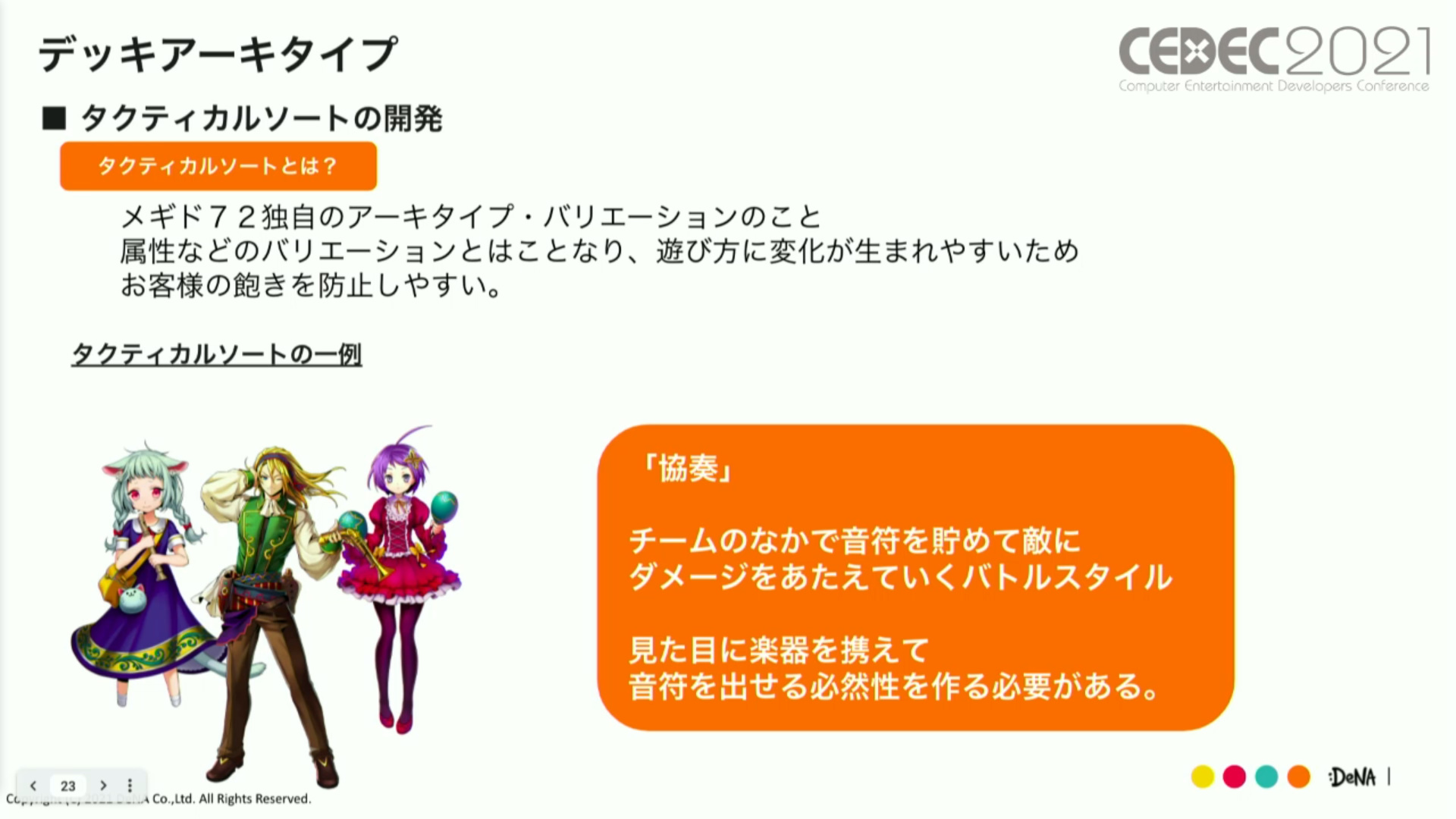 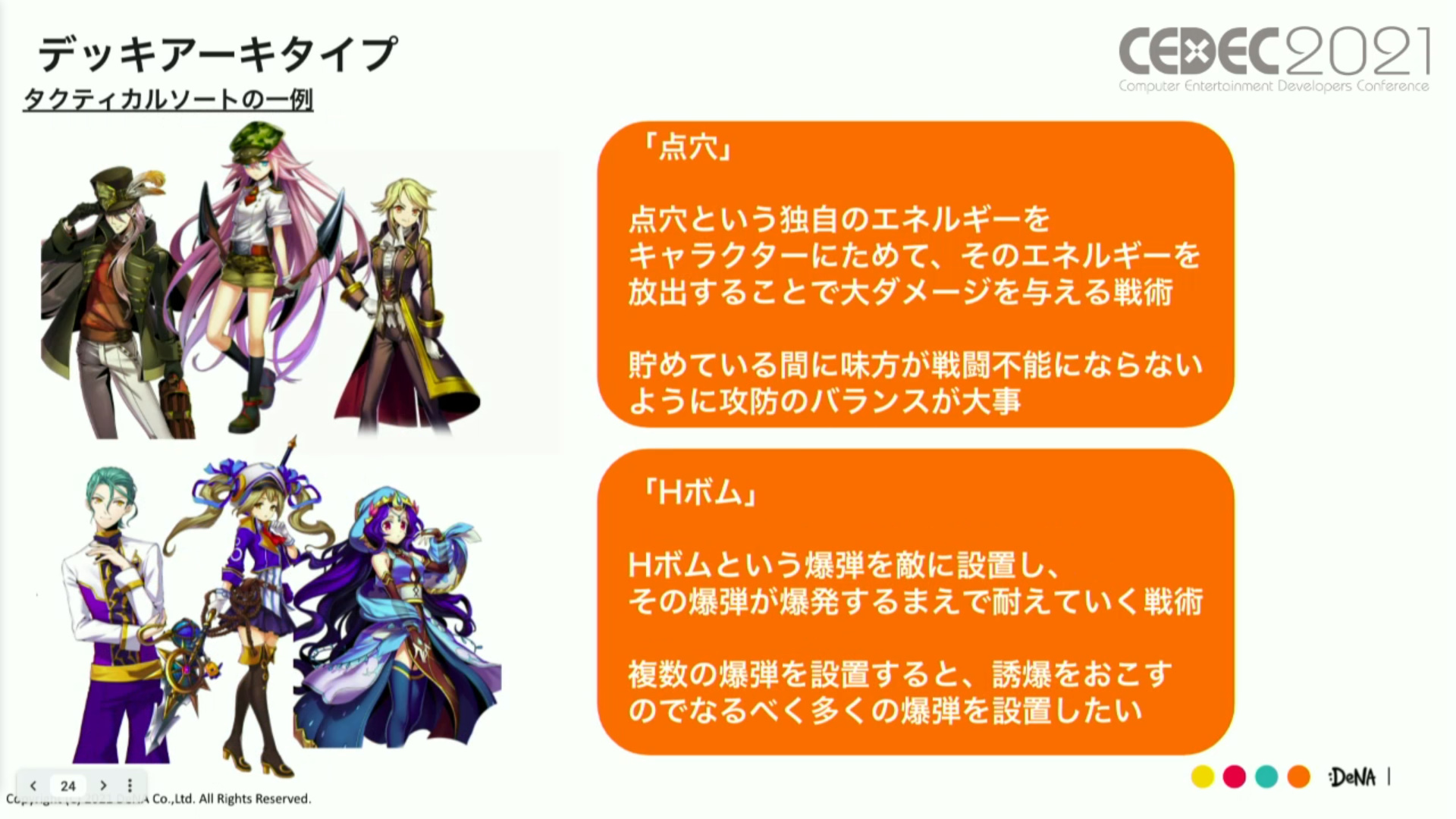 Specifically, it is to give the role more attack mechanisms. The team designed mechanisms such as “Concert”, “Acupuncture” and “H Boom”.

“Concert”: A mechanism that applies note buffs to enemies to keep them hurt. When the team designs this type of role, it will be accompanied by obvious musical instruments.

“Acupuncture”: A mechanism for accumulating energy and then causing a lot of damage. Players need to take into account the safety of other characters when using this type of character.

“H Boom”: A mechanism that sets a bomb on the enemy and waits for the countdown to end. This type of character can set multiple bombs and detonate them together. How to set a large number of bombs is an operational skill. 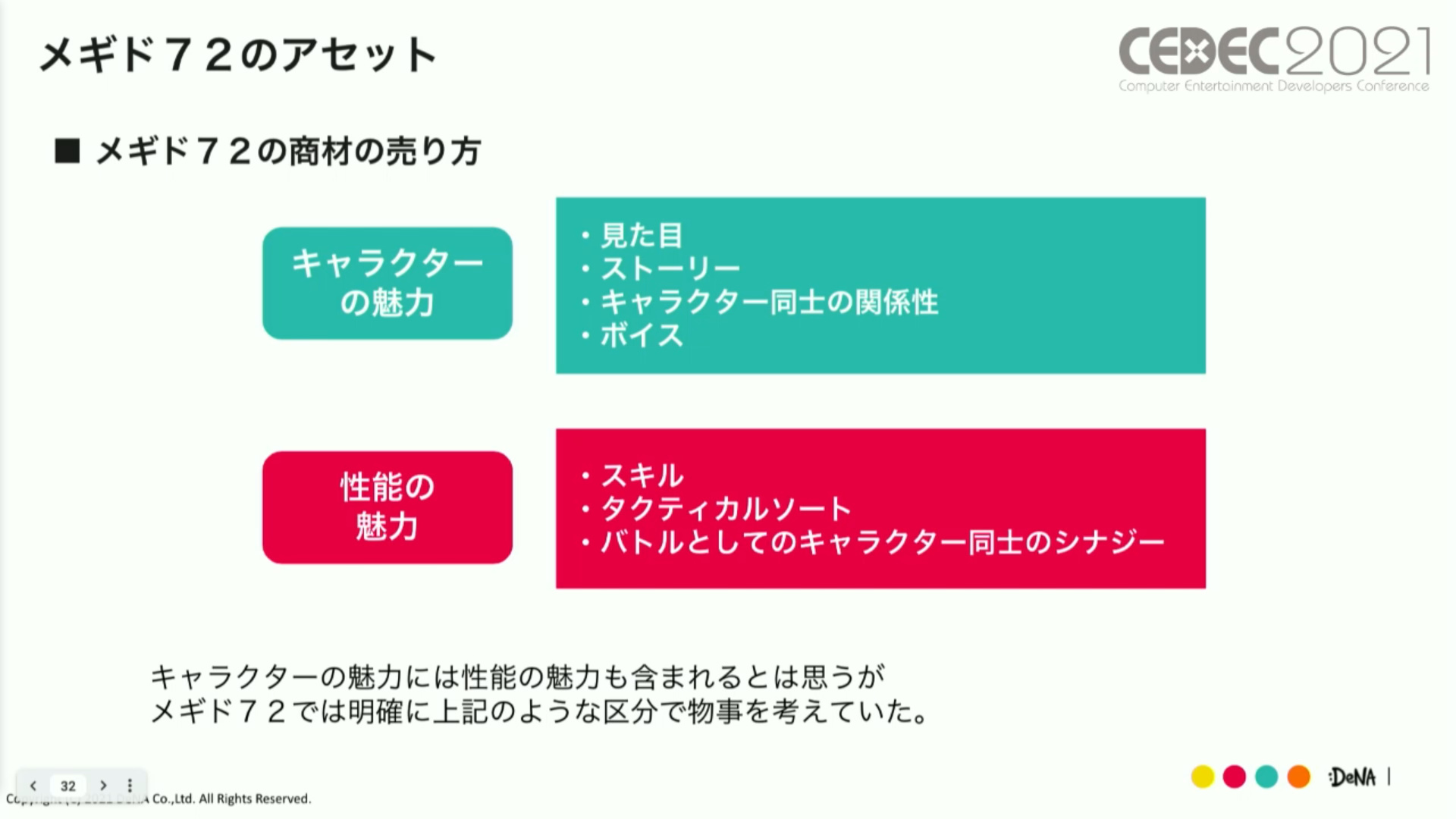 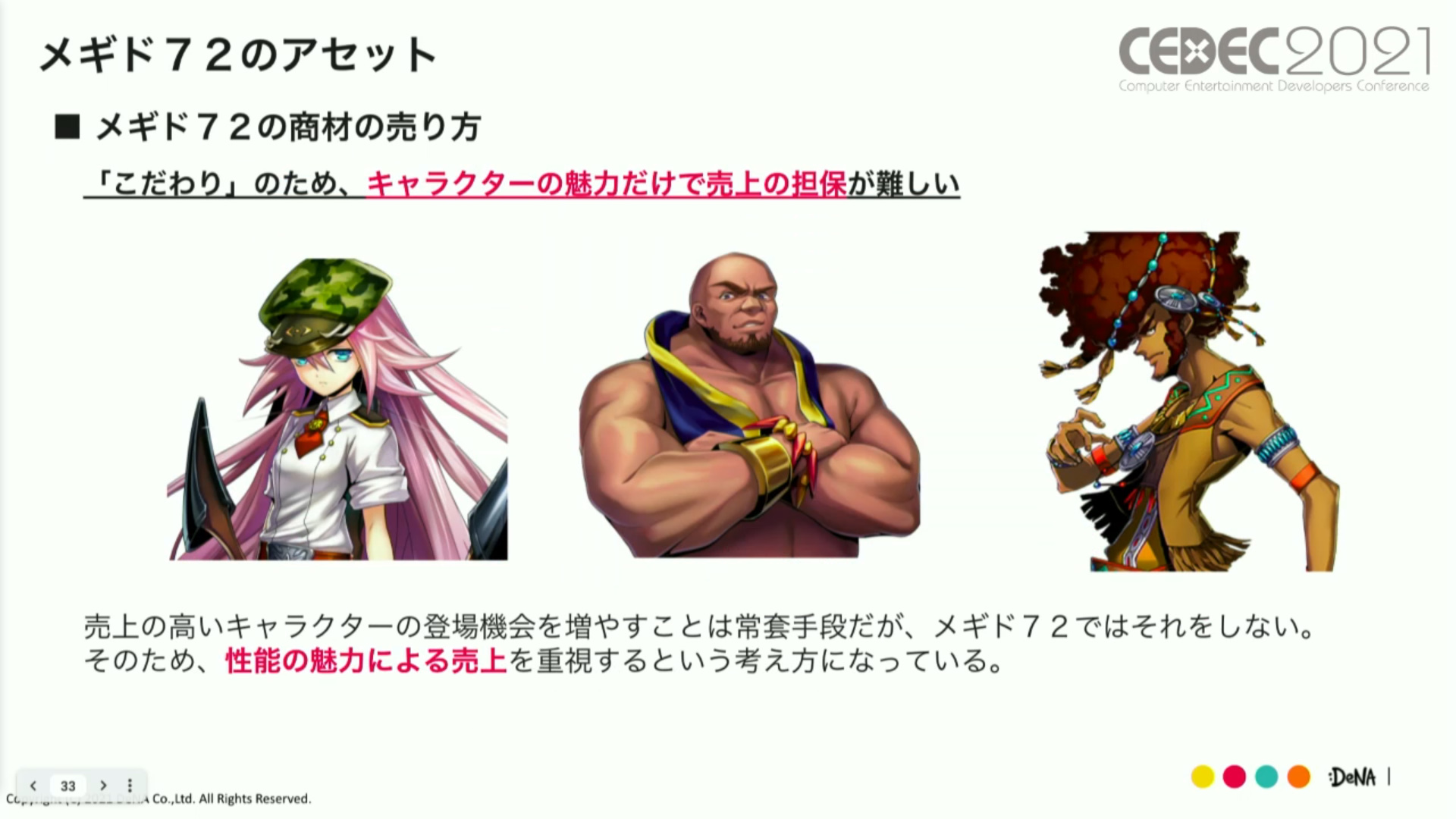 Although I have found a way to successfully implement the game concept, good content does not necessarily mean good results. Character drawing is an important profit method for mobile games, and how to promote the role is a big deal.

The team divides the charm of the role into two parts: personality and performance.

The charm of the personality includes: appearance, storytelling, relationship with other characters, and dubbing.

Performance charms include: skills, tactics, and synergy effects with other characters in battle.

In general games, popular characters are repeatedly changed skins to ensure the flow, but the concept of “Devil 72” is to treat all characters equally, so this policy is not adopted. Therefore, the team needs to continuously create new characters. Since the persona cannot be reused, DeNA naturally pays more attention to the performance charm of the characters.

This has led the team to constantly try to introduce new combat mechanisms, bring rhythm changes to the game, and further increase the difficulty of development. 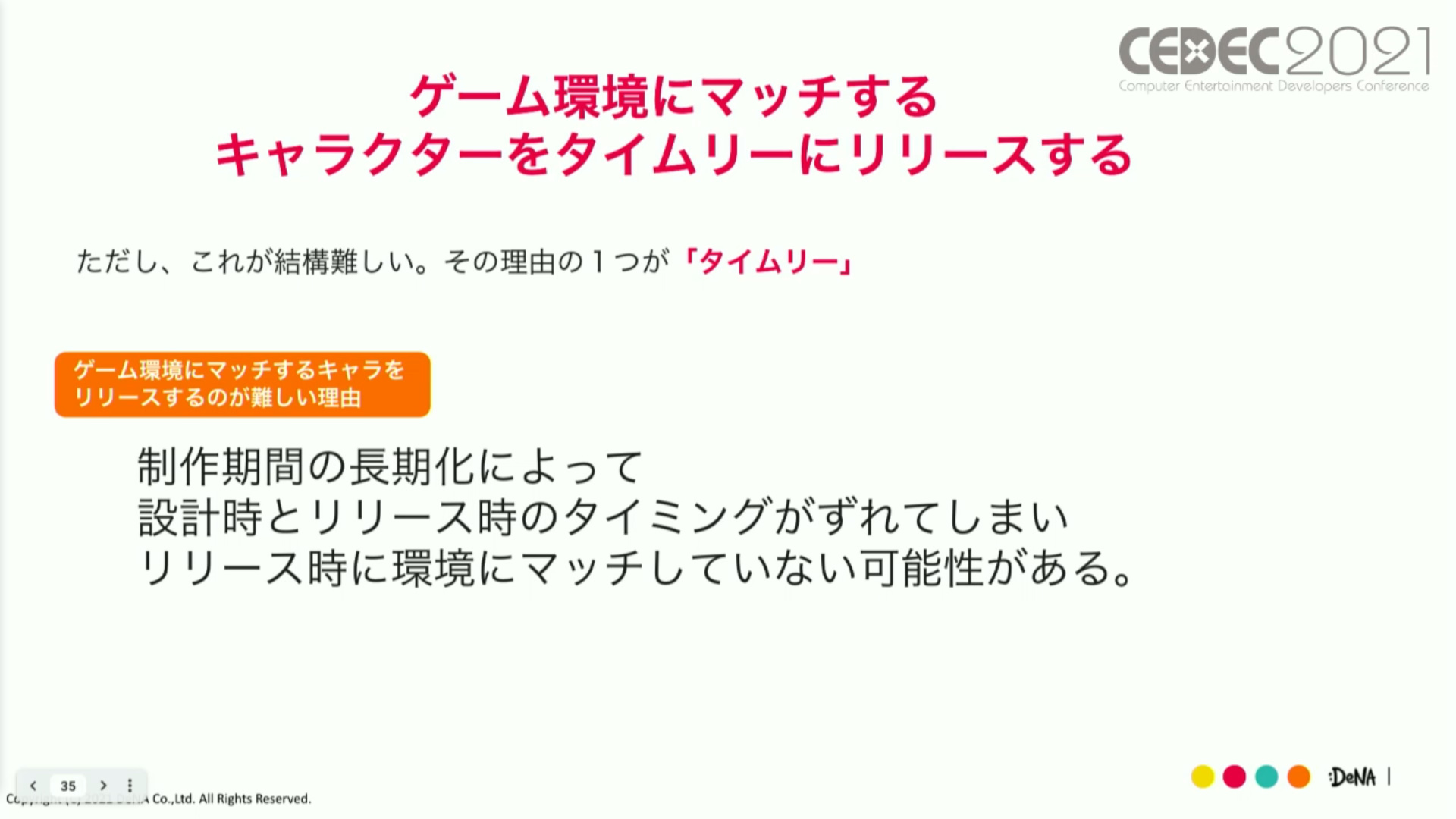 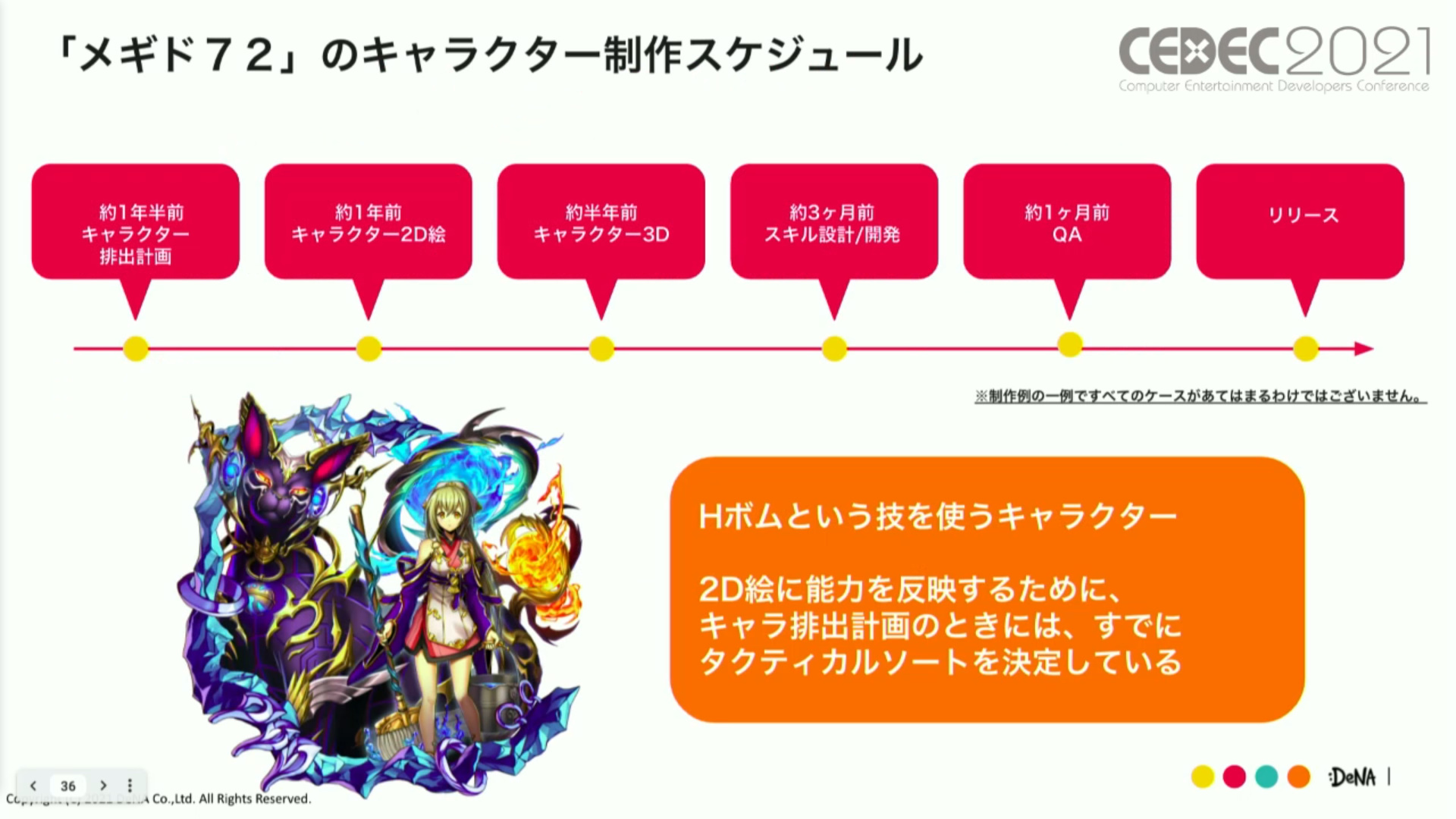 It took one and a half years for the role of the “H Boom” mechanism from design to launch.

The so-called introduction of new combat mechanisms is actually the design of new characters. It takes a long time to design a new role. It takes one and a half years to go through the whole process of planning, drawing, modeling, skill design, QA and launching.

For mobile games, this is even longer. The team needs to take into account the game environment in one and a half years later for development. Hayakawa introduced the prediction method during development. 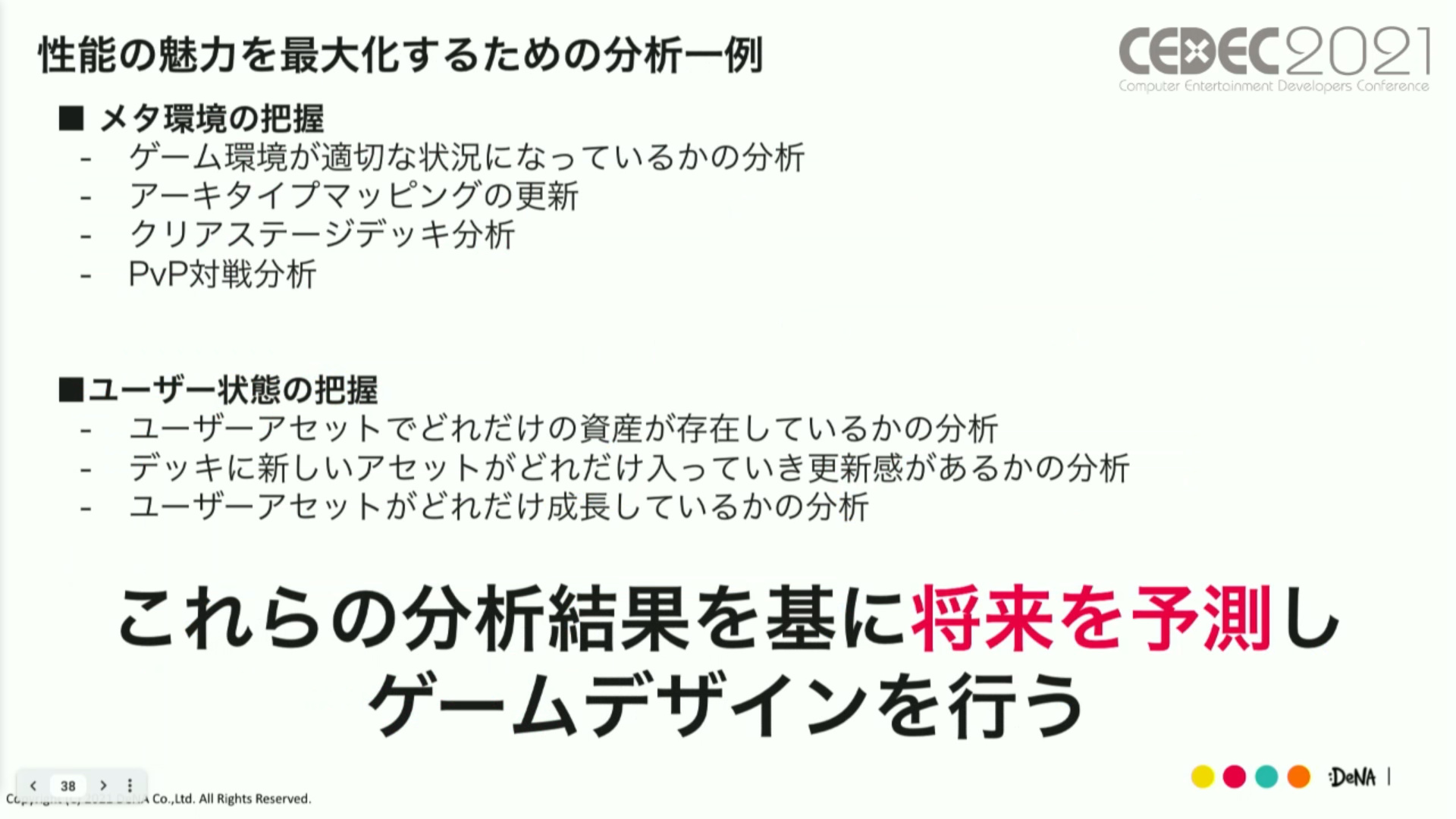 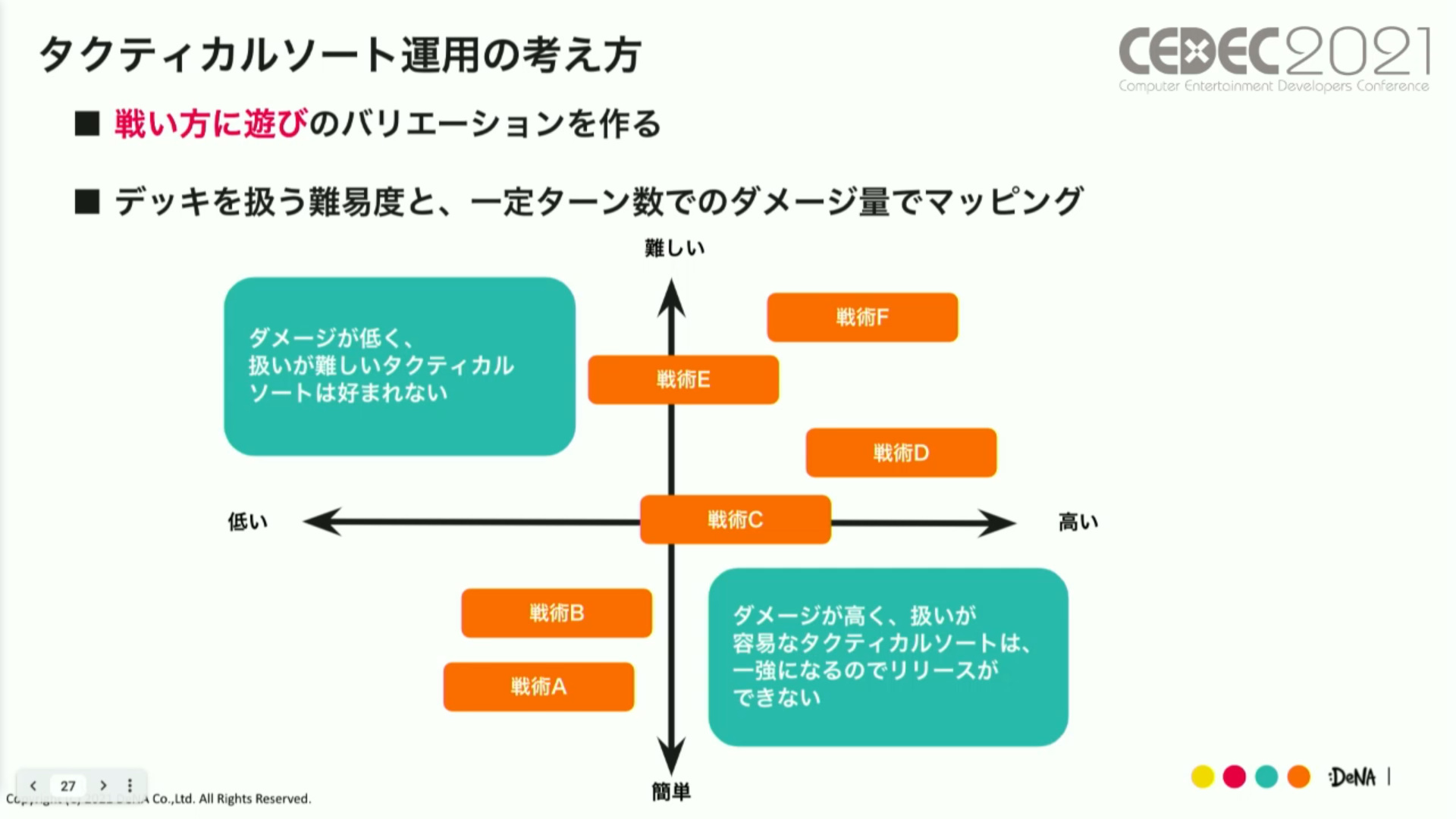 When DeNA is designing characters, it will analyze the situation of both the game and the player.

The game aspect: whether the game environment is suitable for adding new mechanisms; updating the prototype surveying and mapping; analyzing the clearance formation of the level; and the balance in the PvP battle.

The above is the design method of “Devil 72”. As Hayakawa said, the design charm of the game has not been conveyed to the players as expected, which caused the game to fall into a great dilemma. By emphasizing the role performance and the depth of the game strategy, the situation of this game is as follows: It’s getting better, but there is still a long way to go.

Next, Wei Jianren, who is in charge of marketing, described how this game can turn things around and revitalize the game through publicity and operation. “Evil 72” does not stick to the traditional marketing strategy and tried various methods.

For example, the team adopted a unique design on the game promotional image posted at the beginning of the article. It can be seen that the two protagonists are crying loudly. This form of expression is very different from other games on the market. It can arouse many players to be curious about the reason why the protagonist is crying, so they can find out in the game or the community. . 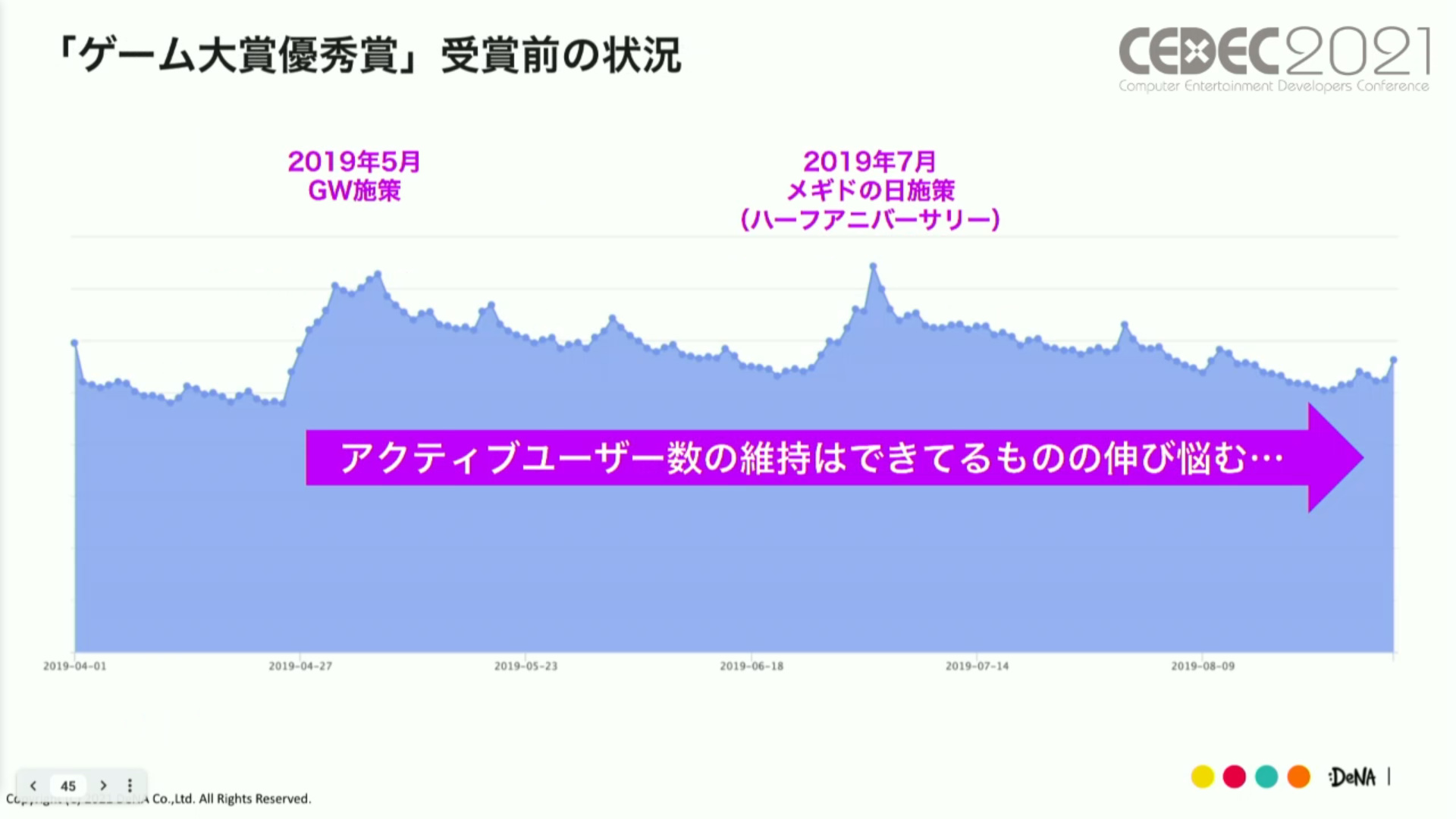 Although the game has achieved certain results in large-scale operations and marketing activities such as linkage, activities, and advertising, the overall number of players on the server has not increased much.

At this time, the game ushered in a major turning point. “Devil 72” won the 2019 Japan Excellent Game Award. Wei believes that we must make full use of the game’s award-winning aura for publicity.

At first, because few mobile games adopted this kind of publicity strategy, the team was not optimistic about this idea. But Wei Xiang, the game producer, emphasized his determination. On the basis of explaining the risks, he expressed the urgency of “the opportunity is not to be missed, and the loss will never come”, and said that “Devil 72 can be the first person to eat crabs.” As a result, Wei conducted a large-scale publicity for the game’s award for six months. 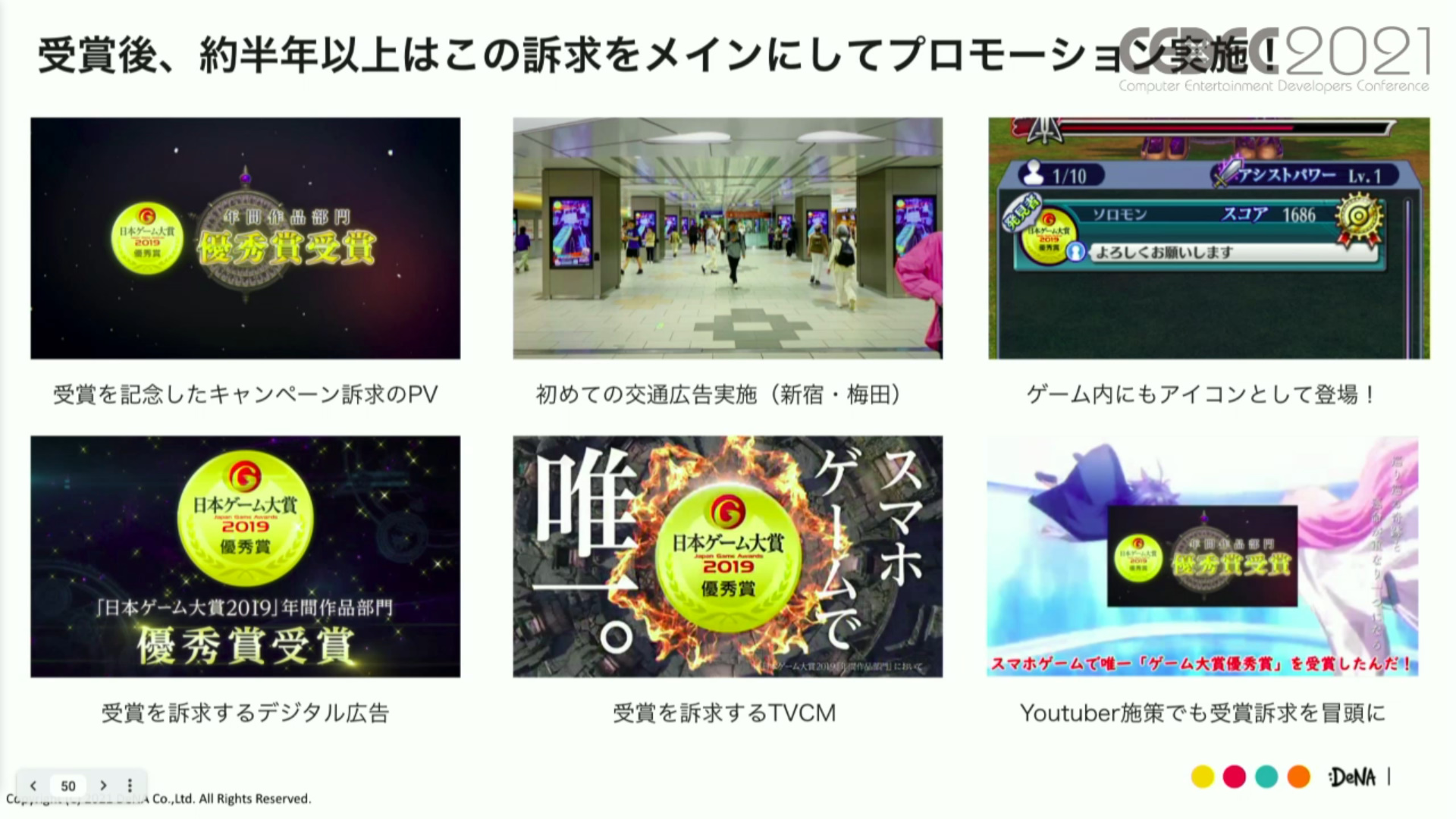 The team produced a special PV for the game’s award-winning event; placed live-action commercials in the tram stations in Shinjuku and Umeda; installed the icon of the Japan Excellent Game Award in the game; placed two advertisements online and on TV; and Youtuber teamed up to get them to promote the winning of the game. 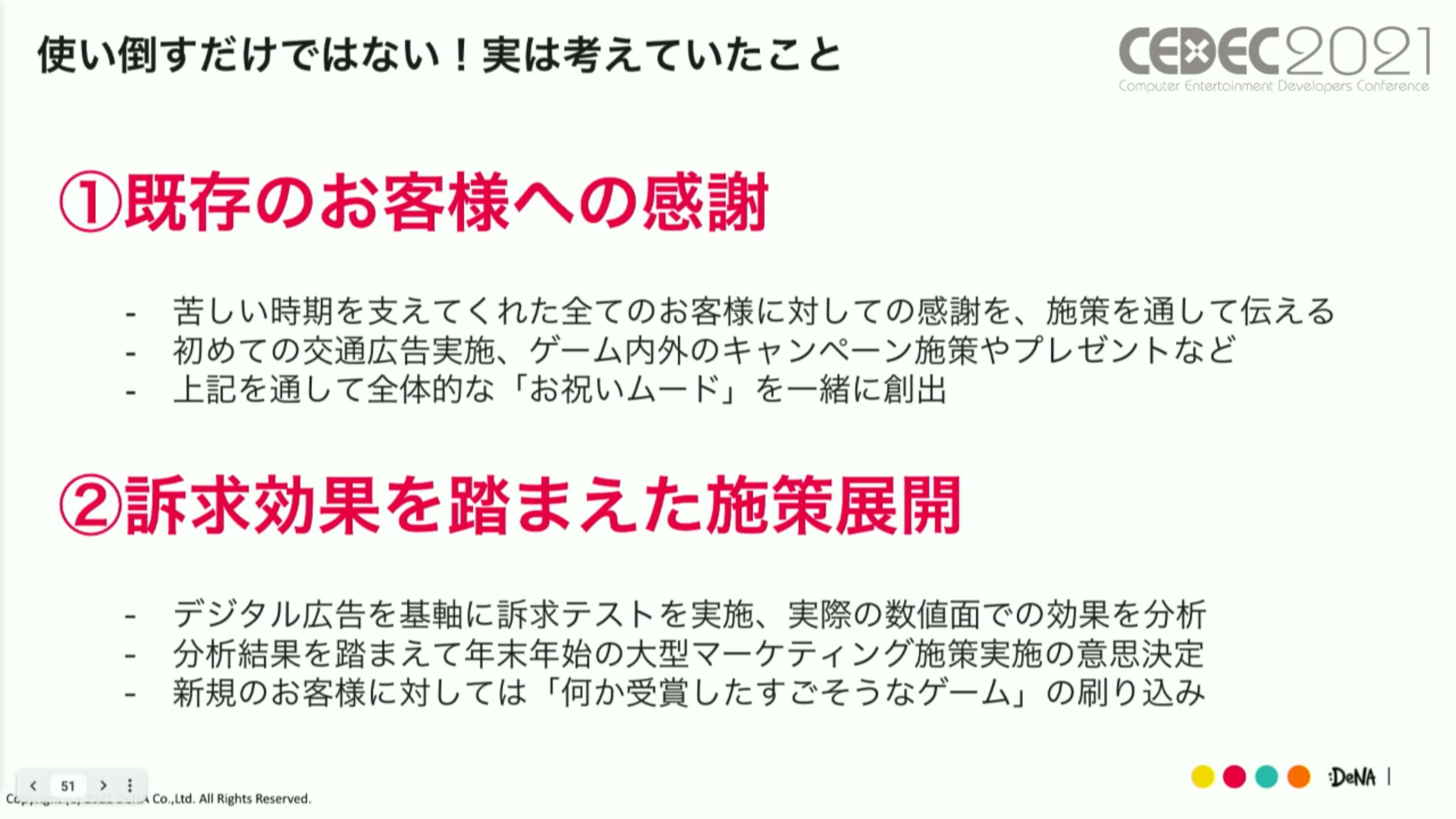 Wei mentioned the main points in the award-winning publicity. The team did not simply announce the award to the world, but after careful consideration. 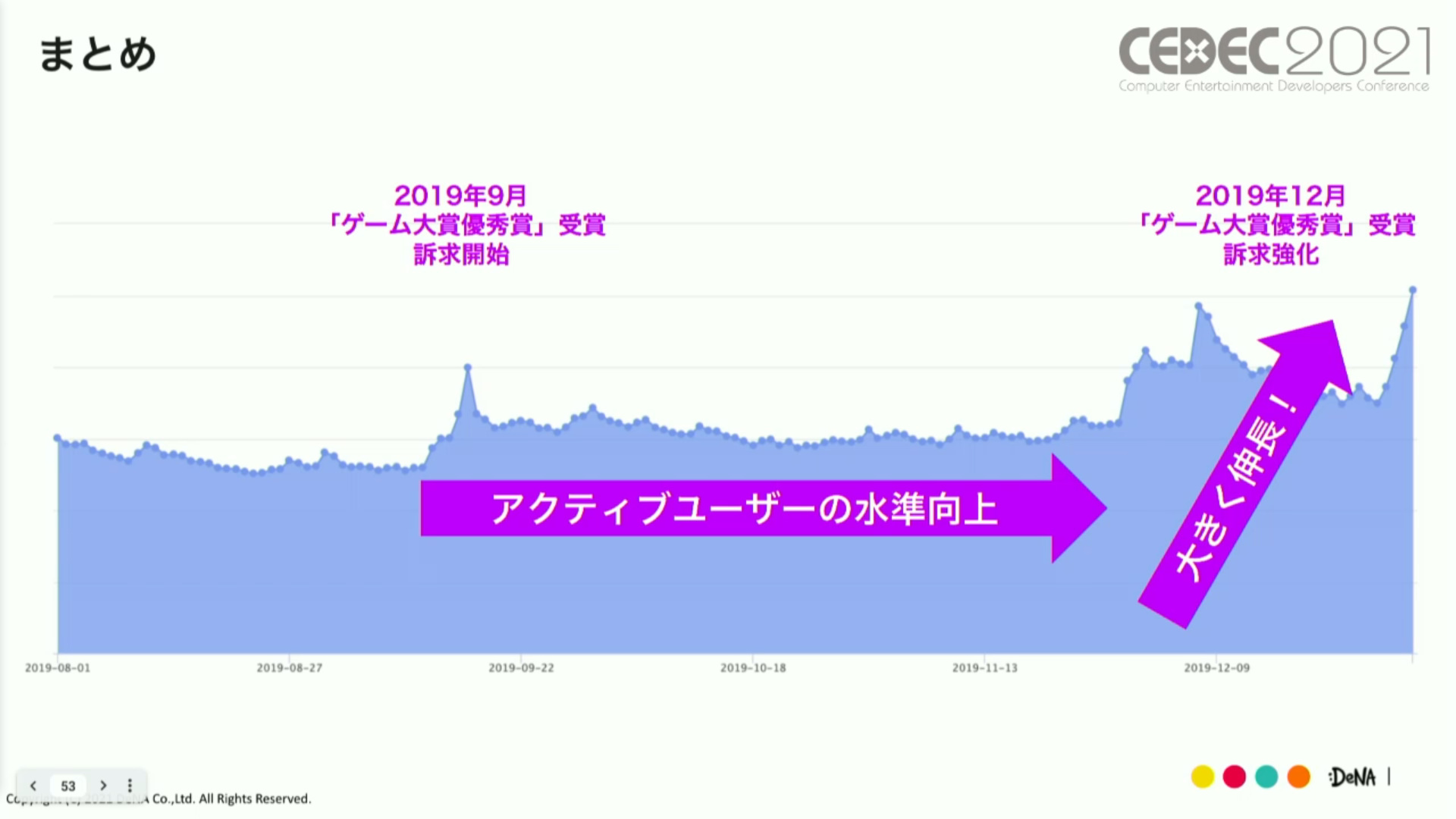 The trend of active users from August 1, 2019 to December 9, 2019. It can be seen that after the promotion of the game in November, the number of active users has increased significantly. 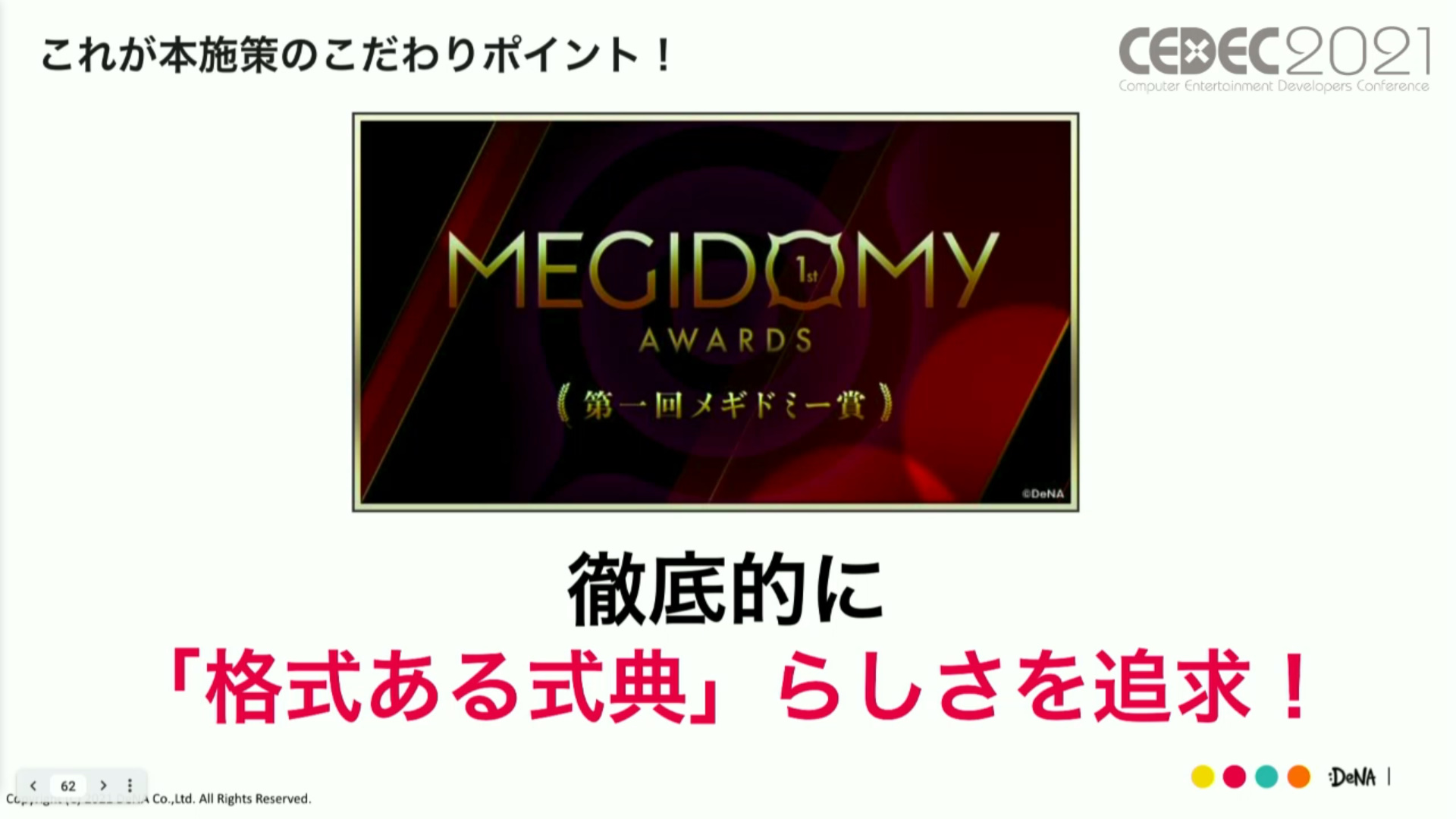 Through the team’s efforts both inside and outside the game, “Devil 72” now often enters the top 100 or even the top 50 of the bestseller list. Revitalize the game and enter the third year of stable operation to become a healthy and profitable product in commercial operation.

In Google Paly, this work has received nearly 40,000 comments, with an average rating of 4.3 points.

One player commented: Needless to say, the plot of the game is also very rich in personality, which makes people want to have it. Game activities can focus on many characters, and I found my destiny in the activities. In addition, the main story of the game is different from other games, which makes people feel very addicted. I especially like Chapter 6. Although I feel that the game’s combat system is a bit difficult, I can also get started with the help of a strategy, especially when I defeat a strong enemy.

Another player said: The quality of the game is really high and very interesting. But my friends and I can’t match the time, and often can’t play together. It’s a bit hard. The plot in the middle and late stages of the game is a bit tiring, but the character design of the Eudemons and the battle changes are particularly diverse, which is very good.

It can be seen that the design concept of “Devil 72” is very successful and has caught the appetite of the players. Through flexible and decisive publicity, the game finally climbed from the best-selling 3,400 to the top 50, simply staged a “reverse growth” of mobile game operations. Including “Reversal of Othello”, DeNA’s resilience, persistence, and respect for its player groups for such “lost” products are worth learning and referencing.