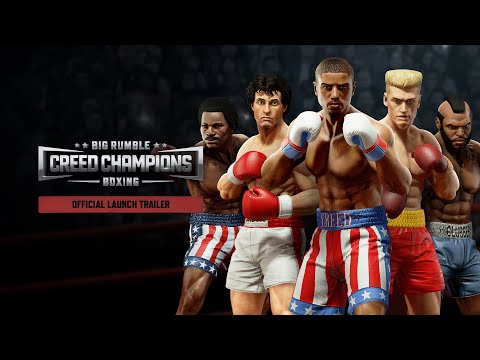 Survios and Metro Goldwyn Mayer (MGM) present the launch trailer Big Rumble Boxing: Creed Champions. This shows some of the features and modes of the arcade boxing game.

Big Rumble Boxing: Creed Champions brings the gripping intensity of creed boxing to console and PC platforms for the first time. Players put on the boxing gloves of 20 legendary characters from the Creed and Rocky universes, such as the eponymous Adonis Creed, Rocky Balboa, Apollo Creed, Ivan and Viktor Drago or Clubber Lang. Whether you’re blasting your way through the ranks of the boxing leagues in the nervewracking arcade mode and experiencing the characters’ individual stories, perfecting your boxing skills in a classic Rocky training sequence or entertaining, local multiplayer mode with your friends on the send virtual boards players can expect an actionpacked arcade boxing experience in a class of its own.

Big Rumble Boxing: Creed Champions features intuitive, accessible controls and a robust, tough boxing mechanism that is easy to learn and difficult to master. This way everyone has the chance to be crowned the ultimate winner.

Rocky and Creed have remained a global phenomenon over the years for their central message to never give up, even when the situation seems hopeless. MGM’s Rocky and Creed films, produced by Chartoff Winkler Productions, have grossed more than $1.3 billion at box offices worldwide, have been nominated ten times for an Oscar and have won three of the coveted trophies. The first Rocky film is celebrating its 45th anniversary this year, and the highly anticipated third installment in the Creed film series is set to hit theaters in 2022.

Big Rumble Boxing: Creed Champions will be available on September 3rd for PS4, Xbox One, and Switch.