Japan’s free list TOP3, how does State of Survival localize in Japan?

GameLook reports/When it comes to games going overseas, Funplus has to be second, and it is difficult for other manufacturers to recognize the first. On August 26, “State of Survival” (hereinafter referred to as SOS) developed by KingsGroup, Funplus’s ace studio, landed in Japan and has remained at No. 3 in Japan’s free list so far. 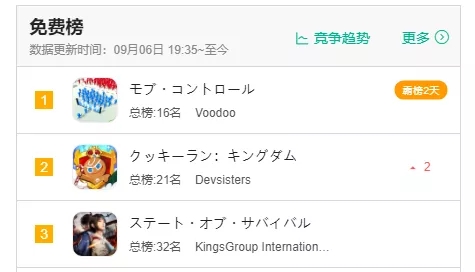 As the name suggests, “SOS” is a doomsday survival game. Its worldview can be explained in four words: doomsday, plague, zombies, and survival. The global download volume of this work exceeded 90 million. This time it was launched on the Japanese server, FunPlus was also prepared. The Japanese version of “SOS” has added new plots and new heroes. It is also very diligent in the localization of the Japanese text and adopted a series of localization strategies. , The game has already harvested 600,000 players before it went live. 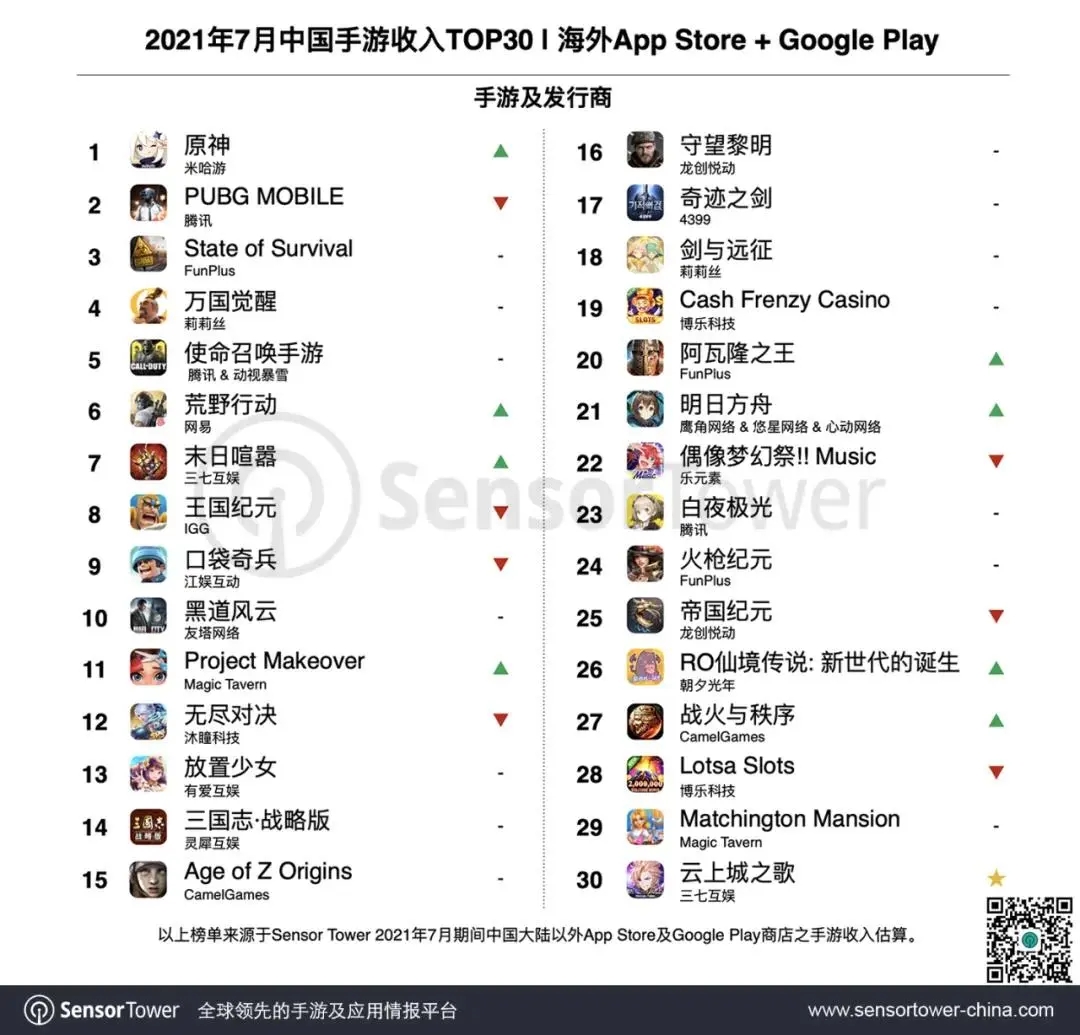 You may not be unfamiliar with “SOS”. It ranks TOP3 in overseas game revenue all year round, with a monthly turnover of over 500 million. GameLook will briefly introduce this product first, and let you see how this game is localized in the Japanese market. of.

Like many classic doomsday stories, players will gather all kinds of characters into their base in “SOS”: former Marines, geologists, girls who do not know the world… Players grow their teams and cultivate characters The bond between the two, you can enjoy the intentional plot and exquisite CG.

Through the construction of farms, timber mills, steel mills and other facilities, players can obtain food and materials, and resources can be used for various enhancements and research.

In battle, in addition to heroes, players also need to send troops. In the barracks, players can train infantry, snipers, and mobile soldiers.

Players can also activate the technology tree in the research institute to strengthen the performance of characters, troops, defense towers, obstacles, etc.

In addition to the main line and activity missions, there are also world missions in the game. Players can rescue survivors, annihilate losses, form alliances with other players, or plunder other people’s resources. The world mission points out the part of the human decision in the theme of doomsday survival, which can be described as the finishing touch, not only enriching the gameplay, but also eliciting the true meaning of this category.

The battle part adopts the form of tower defense, and players can choose three characters to participate in the defense. There are various types of zombies. Some move fast, while others have thick skin and are very resistant to fights. They will attack from two routes. Players can use various obstacles to change the terrain and wipe out the zombies; or rely on their character skills to kill all quarters.

Take the character Serge as an example. He can increase the damage of heavy weapons and set up turrets anywhere. When the level difference between Serge and the zombies is very large, he will be able to wipe out the zombies gathered around the turret and implement fire suppression tactics.

As the level of the character increases, the available skills for the character will increase, further enriching the players’ choices on the battlefield.

Through roles, troops, and various skill systems, the battle provides a wealth of strategies and choices, so that players of all kinds of gameplay can enjoy it.

The role is an important part of Funplus’s localization strategy.

For the same line, once you switch to Japanese subtitles and Japanese dubbing, the taste will immediately change dramatically. Commonly known as “there is an inner taste.”

“SOS” itself walks on the Mika circuit, which is not a pleasing thing in Japan, which is surrounded by the second dimension. To attract some passerby players, the best way is to increase the “two-dimensional concentration” of the game.

There is no need to do Japanese dubbing if no game enters the Japanese market. Funplus invited popular voice actors such as Sugita Tomokazu, Takahashi Li Yi, Ishikawa Yui and others to dub the game. The story part is dubbed throughout, and the role dialogue is worth the player’s stop. With excellent localized texts, European and American people-designed and European-American stories are transformed into Japanese people-designed and Japanese stories. 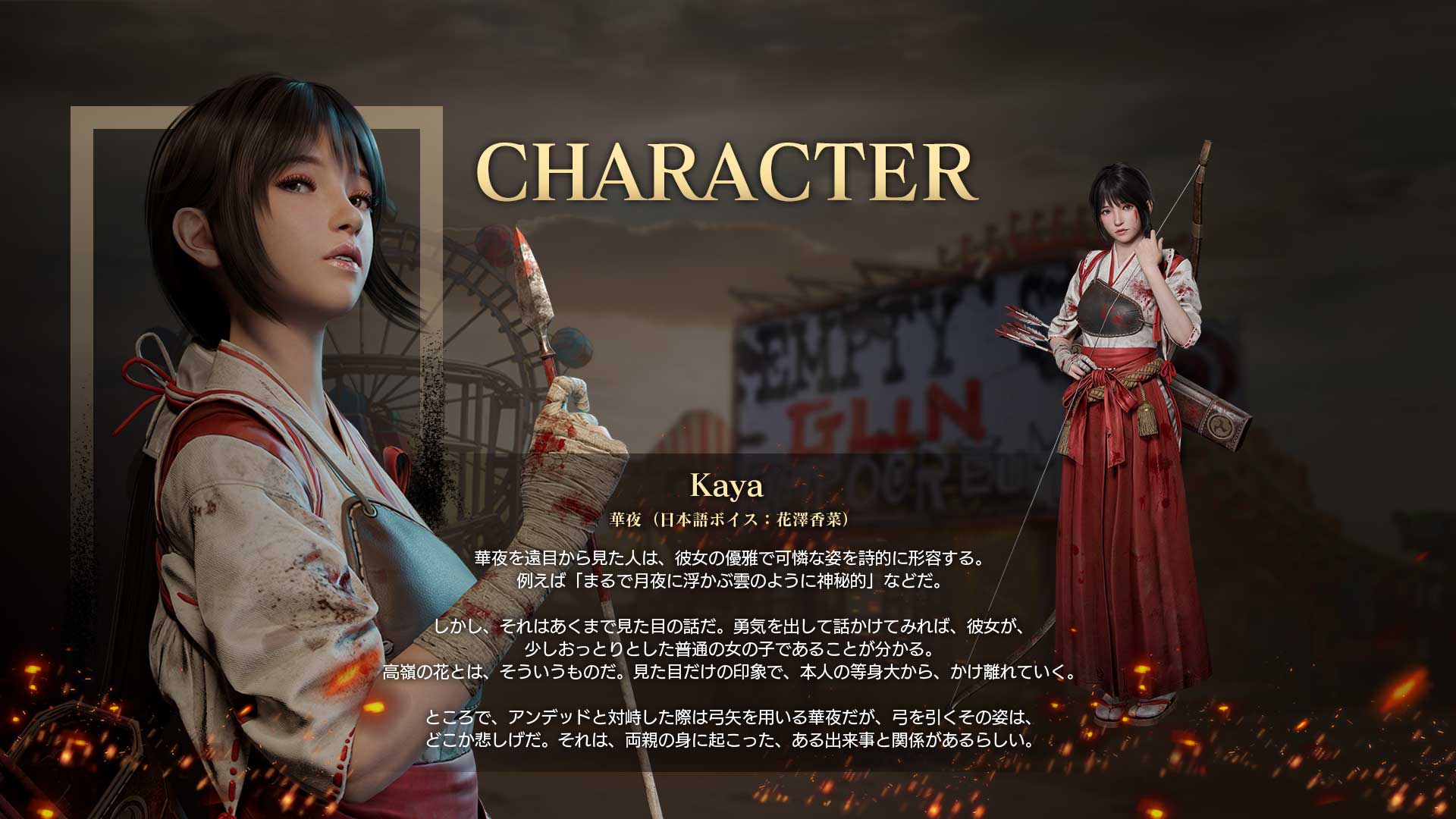 More than that, Funplus has also carefully designed two original Japanese characters for players. Holding a sword and making good use of Iakai’s Qikai; and holding a bow in his hand, Huaye is proficient in archery. Popular seiyuu Uesaka Sumire and Hanazawa Coriander presented voices for the two characters respectively, and the seiyuu’s coffee position alone is enough to make the two-dimensional players interested.

In Japan, female high school students are a group worthy of a big book, and seem to be omnipotent. There is a high degree of discussion in both Japanese society and the two-dimensional works. The Japanese zombie-themed animation “School Apocalypse” is a group drama for high school students.

Speaking of Taito, many people will also think of Japan for the first time. The popular heroine “Red Hitomi” in “Crimson Hitomi” is the character holding the Taito, and weapons are also a major element in shaping the character’s character.

Not to mention the witches, in the popular global animation “Your Name”, the scene of the heroine dancing in a witch costume must have touched the hearts of many people.

Funplus’s dedication to these two roles not only impressed Japanese players, it can be said to be effective for the entire two-dimensional player community.

Through Nanami’s CM, you can feel the “home” taste that is completely different from other characters in the game. The actual installation of these two characters, coupled with the promotion of CM, has achieved quite good results.

One player said that he only downloaded the game after seeing the ad, and found that all sections are doing quite well.

Celebrity endorsements to help out, virtual anchors to divert traffic, and full output of the two-dimensional audience

In addition to the new role of CM, Funplus also released TVCM starring the actor Fujiwara Ryuya. Fujiwara Ryu has also appeared in films adapted from comic works such as “Death Note” and “Gambling Revelations”. Fujiwara Ryuya played a very good circle breaking effect. A netizen commented on Youtube that he hoped that Ryu Fujiwara could also become a character in the game.

Others also expressed regret that Fujiwara Ryu didn’t install it in the game. They said that although they are not interested in the game, the advertisement is very interesting. The actor’s martial arts scene with all his strength makes people feel very handsome.

These players who like TVCM but have no interest in games are likely to spread the video because of the excellent quality of TVCM itself, so that more people can watch the video and find its potential players. 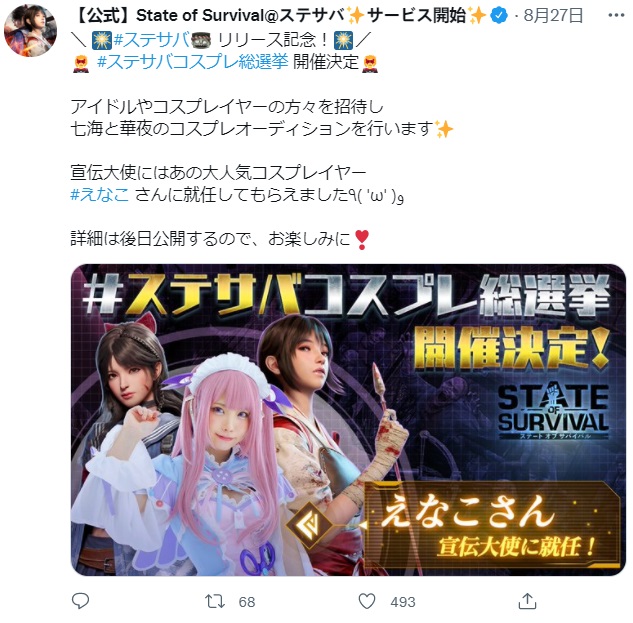 The game also found the popular cosplayer Enako as the propaganda ambassador. This move clearly shows Funplus’s intention to attack the two-dimensional group.

When it comes to game exposure, live broadcast is of course the preferred method. “SOS” has reached cooperation with several virtual anchors to conduct live games. The audience of virtual anchors also has a high overlap with two-dimensional game players. 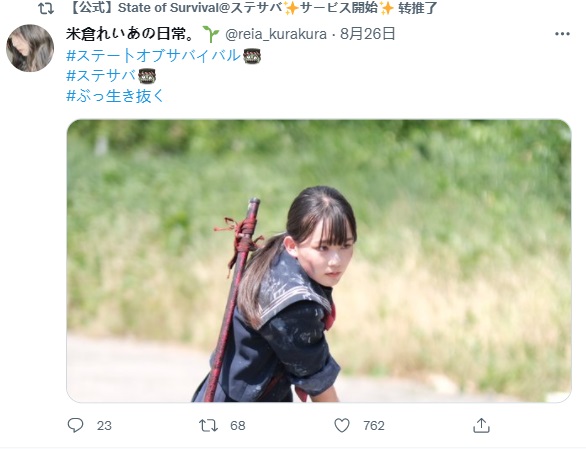 In addition to official activities, Funplus also pays great attention to the maintenance of the player community. The official tweet reposted the content created by cosplay and others, trying to establish a community of “SOS” players as soon as possible.

In addition, “SOS” has not been left behind for events such as appointment rewards and voice actor messages.

However, the game also encountered some twists and turns.

A player praised the high gameplay of “SOS” and was very happy to cultivate characters, but there would be sudden loss of voice in the game, so Samsung was given. It seems that the game still has some problems in Debug, which leads to a decline in player experience, which must be paid attention to.

Another player said that he felt that “SOS” was an easy game to start, and it was too dangerous to control the money. He hoped that the game would be added to the money limit. This obsession made him score 1 star.

It can be seen that the first player may have encountered some equipment compatibility and adaptation problems, while the second player raised a problem entirely at the level of Japanese social laws and regulations. These two points can also be regarded as localization problems. This is where Funplus still lacks in localization.

Funplus packs European and American style games in Japanese style, and focuses on the two-dimensional group in various channels and placements, making the seemingly counter-intuitive success. The publicity and localization strategy of “SOS” can provide enlightenment and reference for many Meika Circuit games, allowing them to enter the Japanese market as the key to entry.