The Call of Duty mid-term update is about to be released for Warzone and Black Ops Cold War.

In what is turning out to be a huge week for Call of Duty, Season 5 Reloaded will have a September 9 release date and a 5am BST start time for fans living in the UK.

Fortunately, with an update of this magnitude, Activision gives a number of players the chance to download the new content early.

The Black Ops Cold War update will be available for download on September 8 at 5:00 AM CET. Some PlayStation users can even download the patch now.

By preloading the content, you don’t have to wait to start playing as soon as the content starts.

Unfortunately, the same isn’t true for Warzone fans, who will have to wait until the start of the season to download and install the new update.

While the full patch notes will be revealed soon, Activision has already given fans a pretty good idea of ​​what to expect.

This includes the redesigned Zoo map, which was first seen as part of the Black Ops Escalation Pack in 2011.

The action takes place in the zoo’s main animal exhibit and park, as well as in the gift shop. You can even jump on the monorail to jump on the enemies below.

Fans will also be happy to hear that Demolition is once again bringing back the Black Ops Cold War.

In the returning multiplauyer mode, a team of attackers tries to destroy a few bombs, while defenders try to prevent the blasts.

“Total chaos ensues when the time is extended after the first bomb site is destroyed, and both teams have a chance to play offensively and defensively before the match ends,” Activision explains.

“If there is a tie, expect even more madness: a single neutral bomb site becomes active, with the first team to detonate it wins the match.”

As for Warzone, fans can take part in some new game modes such as Clash and Iron Trials ’84 appearing. 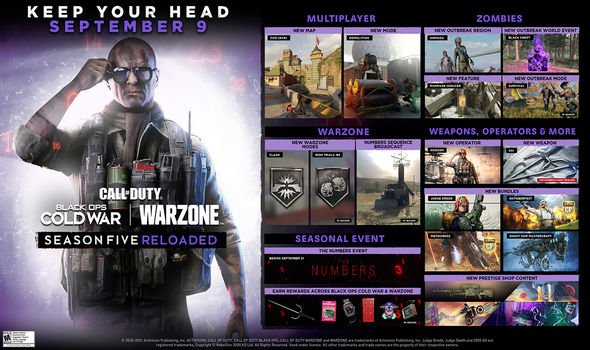 Iron Trials is described as the “toughest battle royale mode to ever come to Verdansk”.

Players can say goodbye to free loadout drops, while everything from time to kill, weapons, perks and equipment viability have been changed to make it harder.

Finally, and perhaps most exciting of all, two new operators will appear in the item store.

This includes Special Agent Jason Hudson, as well as comic book hero Judge Dredd. Both will be available in season.