The top three on this list remain stable, still being Tencent, Netease and Mihayou. It is worth noting that after the release of the 2.1 version of “Original God” on September 1, the daily flow of Mihayou mobile terminal reached 1.66 times the previous peak. With the launch of the first anniversary celebration at the end of September, the income of Mihayou is expected to reach a new high.

Thanks to the full-line growth of revenue from its various products such as “Douluo Dalu: Soul Master Showdown”, “Puzzles & Survival”, “Song of the Clouds City” and other products, more domestic and overseas markets have blossomed, and Sanqi Mutual Entertainment’s August revenue A quarter-on-quarter increase of 45.6% and a year-on-year increase of 349.2%, a record high, ranking 10th in the global mobile game publisher revenue list, and returning to the 4th in the Chinese mobile game publisher revenue list. In the current revenue of Sanqi Mutual Entertainment, the revenue from China’s iOS market accounted for 33.6%, and the proportion from overseas markets was as high as 66.4%. Among them, Japan, the United States and South Korea, as the top three overseas markets, contributed 25%, 12% and 10.5% respectively.

Due to the launch of “Tomorrow’s Ark” in August in both domestic and overseas markets, the revenue of publishers related to the game has achieved substantial growth. Relying on the results of the Summer Carnival, the revenue of R&D Business Eagle Corner Network increased by 73.5% month-on-month; After the 1.5th anniversary of its launch, the revenue of Yostar Network, which is responsible for overseas distribution, increased by 33% month-on-month. At the same time, the game’s publisher Xindong.com’s revenue in the Hong Kong, Macao and Taiwan markets increased by 24.2%, returning to the list.

With the opening of the 5th anniversary commemorative event of “Destiny-Grand Position Designation”, Bilibili’s revenue increased by 74% month-on-month and ranked 24th on the list. Changyou launched the card mobile game “Little Raccoon Hundred Generals” in early August. Driven by the game, the publisher’s revenue surged 76 times from the previous month, making it ranked 27th on the list.

The biggest explosion in the domestic market in this issue is undoubtedly the auto chess mobile game “Golden Shovel Battle” authorized by League of Legends Genting Zhiyi. It was launched on August 26. With just 6 days of revenue, the game ranked 11th on the August China iOS mobile game bestseller list.

Thanks to the strongest treasure chest event in history opened on August 14, Tencent’s “Cross Fire” revenue increased by 90% month-on-month in August, setting a new revenue record since its listing in 2015. 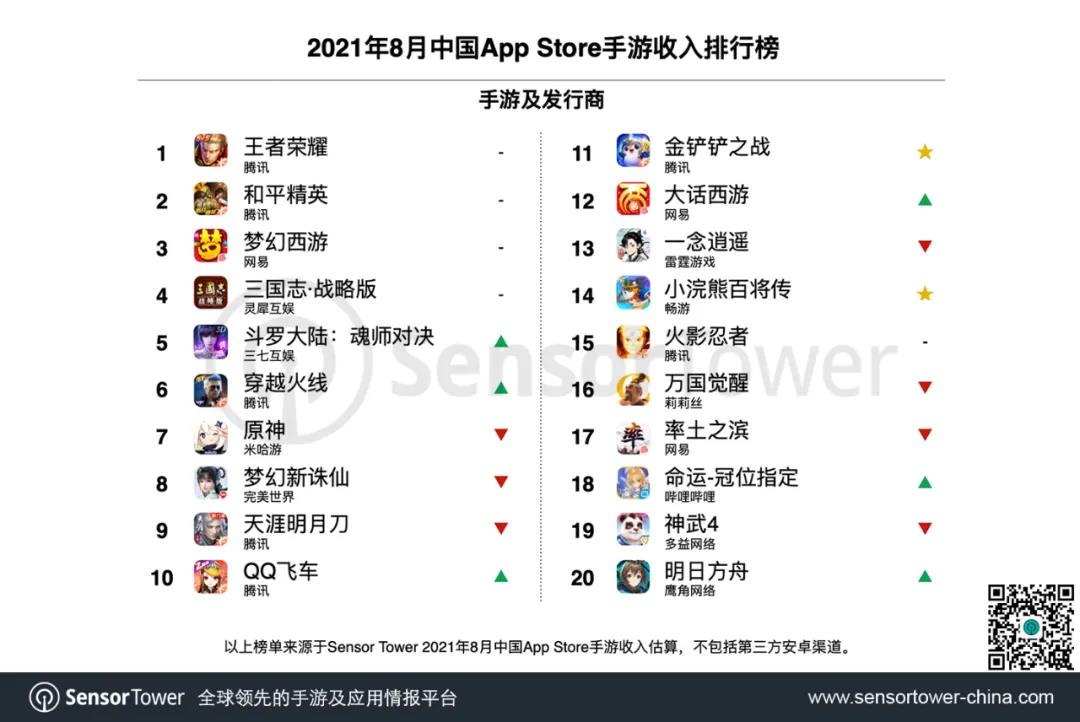