Thousands of people lined up and won the bestseller list on the first day. The mobile game of “Harry Potter” is really “exploded”!

Even in China, most people who have never been in contact with “Harry Potter” have heard about it: 7 novels have been translated into 73 languages, a total of over 500 million copies have been sold, and 8 series of movies have been sold worldwide at the box office Reaching 7.8 billion U.S. dollars… “Harry Potter”, which was born for more than 20 years, has grown with 1.5 billion fans around the world, and has also affected the two generations of the 80s and 90s.

Today, this heavyweight IP has once again come to the game circle. 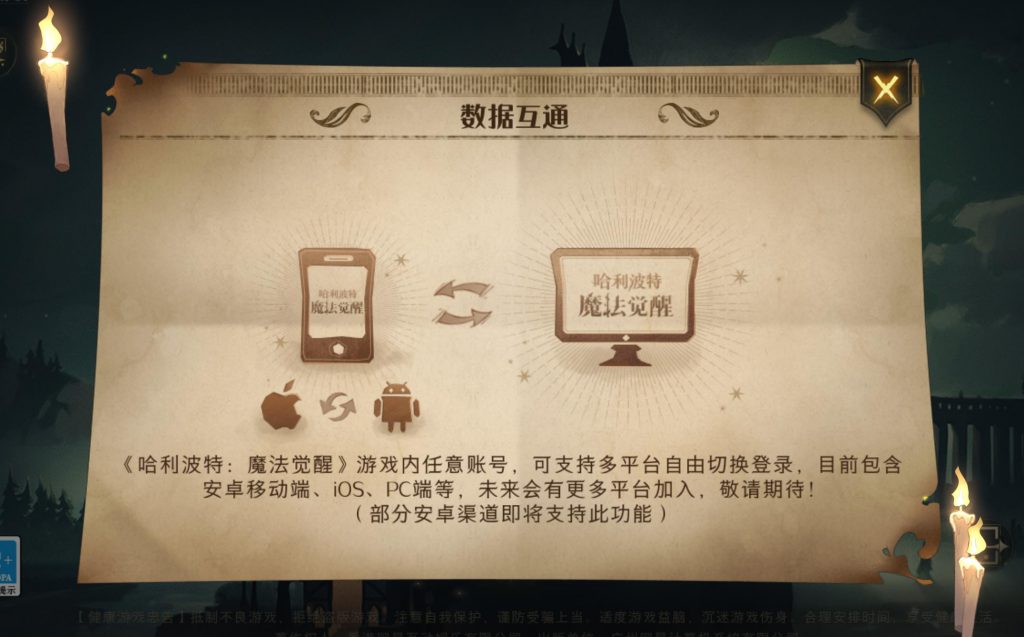 Before it went live, the number of reservations for the game in China, Hong Kong, Macao and Taiwan exceeded 15 million, which aroused high expectations from Harbin fans. After the pre-download was launched on September 7, the game reached the top of the iOS free list without a surprise, and continued to dominate the list for 3 consecutive days. This rare high fever also continued to the opening day: a large number of players poured into the game at 8 o’clock this morning, which once caused more than 5,000 “wizards” to line up on some servers. At the same time, the game quickly ranked among the top 5 best sellers.

It wasn’t until around the afternoon that the queue of thousands of people on the server was improved, but the popularity of the game did not decrease at all, but it continued to rise. Finally at 3 pm, “Harry Potter: Magic Awakening” officially topped the iOS best-selling list and ranked first in the double list.

Wizard Carnival Day, Muggle: I can’t understand but I was shocked

Feelings-this word has always been mentioned repeatedly in the past two years. Indeed, there is no topic that can arouse heated discussion by the whole people more than “Yeh Qinghui” and “Memories Killing”. And the wizards who waited more than 20 years ago finally came to the lost owl today. A rare wizard carnival is naturally inevitable.

Nevertheless, I still underestimated the popularity of “Harry Potter: Awakening of Magic” on its first day of release. 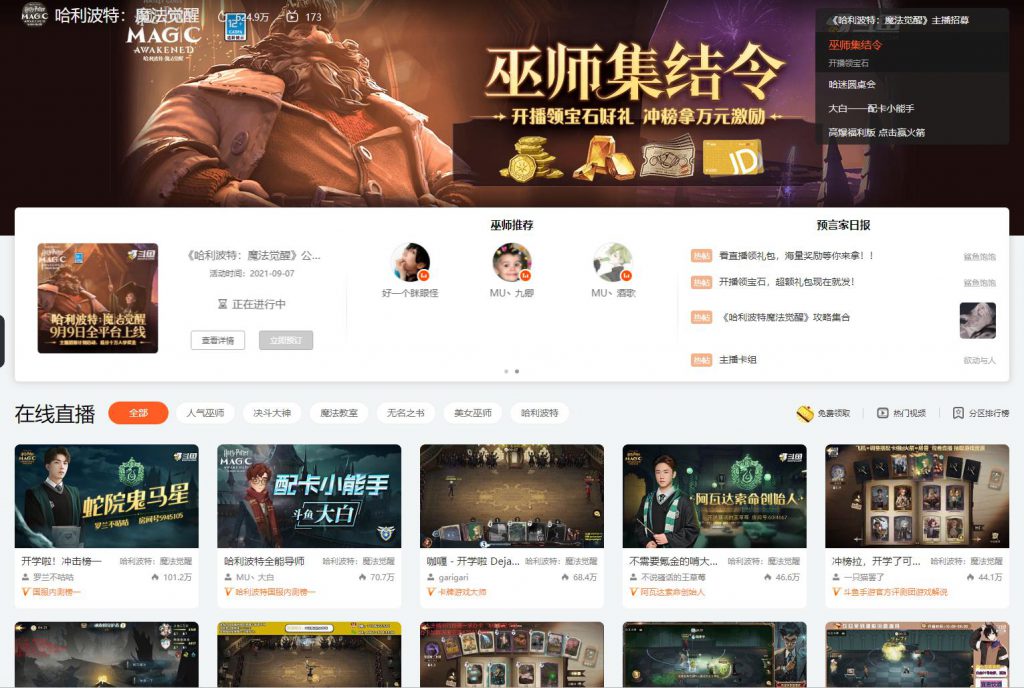 In fact, after the pre-registration was opened two days ago, players who couldn’t wait began to publish their Hogwarts student IDs on major platforms. At the same time, since the game has not yet been launched, the chat system and the community have become the most lively places.

On the opening day, before entering the game, GameLook, which opened various social apps first, already felt the overwhelming enthusiasm of the players. In my memory, the last time such a grand occasion appeared was the launch of another childhood memory “Moore Manor”, but “Harry Potter: The Awakening of Magic” is obviously not inferior to it.

Just by Zhihu, the topic of “The game “Harry Potter: Magic Awakening” went live on September 9th, what was your experience?” The topic quickly became the top 10 searched, and the number of readings in just a few hours has exceeded one million.

And on Weibo, #獾院才是我的归宿#, #Hogwarts every hospital public frequency are talking about what # and other related topics have been among the top searches, among which #四后再成了室友# once entered The fourth most searched.

The origin of the topic was when a player posted a blog post saying that he reunited with his four-year university student in the same dormitory in Gryffindor. This excitement and excitement also infected other people. Many players have started to share the happy life of reading books and practicing magic wands with their friends, or jokingly saying “Rebirth will be a roommate in Hufflepuff again” and so on.​ 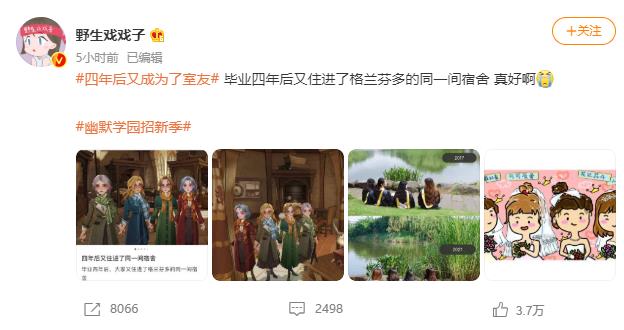 In addition, anecdotes about different academies are another focus of player discussions.

As we all know, “Harry Potter” is divided into four colleges: Gryffindor (Lion House), Slytherin (Snake House), Hufflepuff (Badger House), and Ravenclaw (Eagle House). The game uses this as a blueprint, recreating the classic sorting hat ceremony in the original book (of course, it can also be selected manually).

It is precisely this near-realistic restoration that greatly increases the player’s sense of substitution, and a new topic emerges-what are the public channels of the colleges talking about? 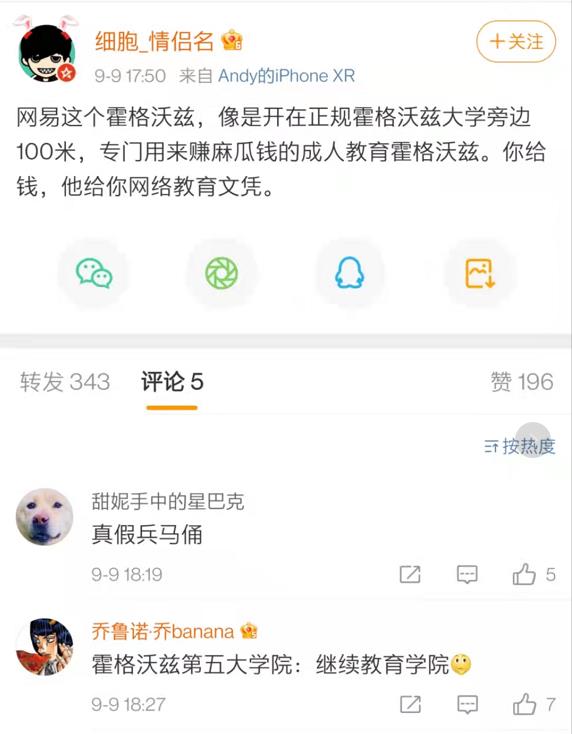 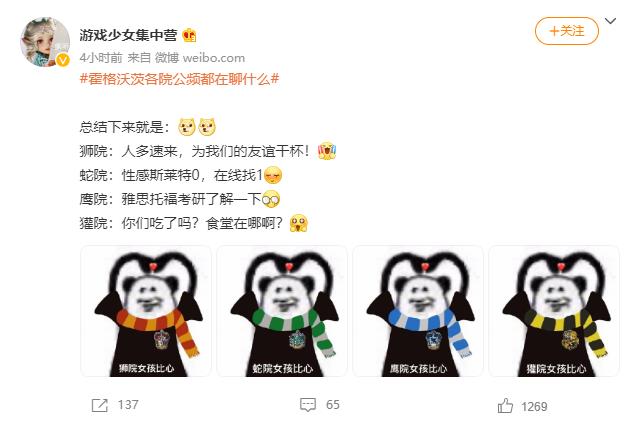 It is recognized that the most obvious feature is: Eagle Academy is dominated by academics per capita, and even public frequency discussion topics are related to academics such as postgraduate entrance examination and public examination. The communication is always inseparable from “IELTS TOEFL entrance examination”, and even self-study is built in the game. room.

A large number of players watched, both squeezed their heads and wanted to join the strong academic atmosphere, and there was no lack of self-ridicule, “I watched a circle, I don’t deserve to stay in Ravenclaw.”

But compared to the Eagle Academy players who made people call “rolled up”, the Badger Academy, which rushed to the fourth most searched place, was the opposite: it was more like a gathering place for Buddhist players. Three sentences do not depart from “dry rice”, the per capita dry rice is stone hammer. 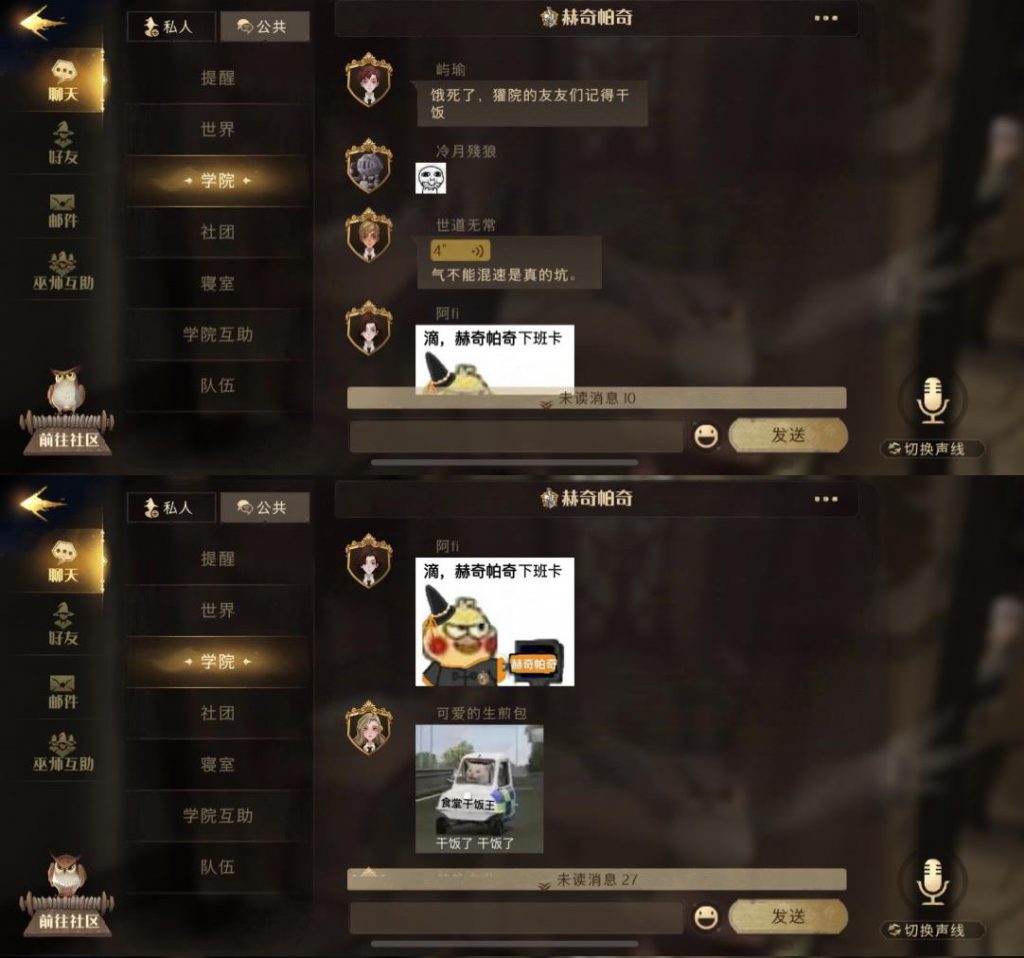 It is not an exaggeration to say that “Harry Potter: The Awakening of Magic” can almost be regarded as the first new game in China that is launched on all platforms in the true sense after “Original God”.

According to GameLook’s survey, not only iOS and Windows, games have been pre-downloaded at the same time on all Android channels including Xiaomi, Huawei, and OPPO, and even rarely landed on MacOS.

You should know that even “Yuan Shen”, which has already opened up the PS platform and plans to cover the Switch, has not been able to launch MacOS. So far, Mac users still need to experience the game through cloud games.

In fact, this is not the first time that NetEase has tried multi-platform distribution. Games including last year’s “Tianyu” mobile game have already completed the interoperability of PCs and mobile phones. A few years ago, NetEase used the form of the interoperable version of “Fantasy Westward Journey” earlier to realize the cross-platform experience for players.

Backed by a global super IP, “Harry Potter: Magic Awakening” is naturally unwilling to only be online in China. A few months ago, officials have publicly revealed that the game will be released throughout Asia. 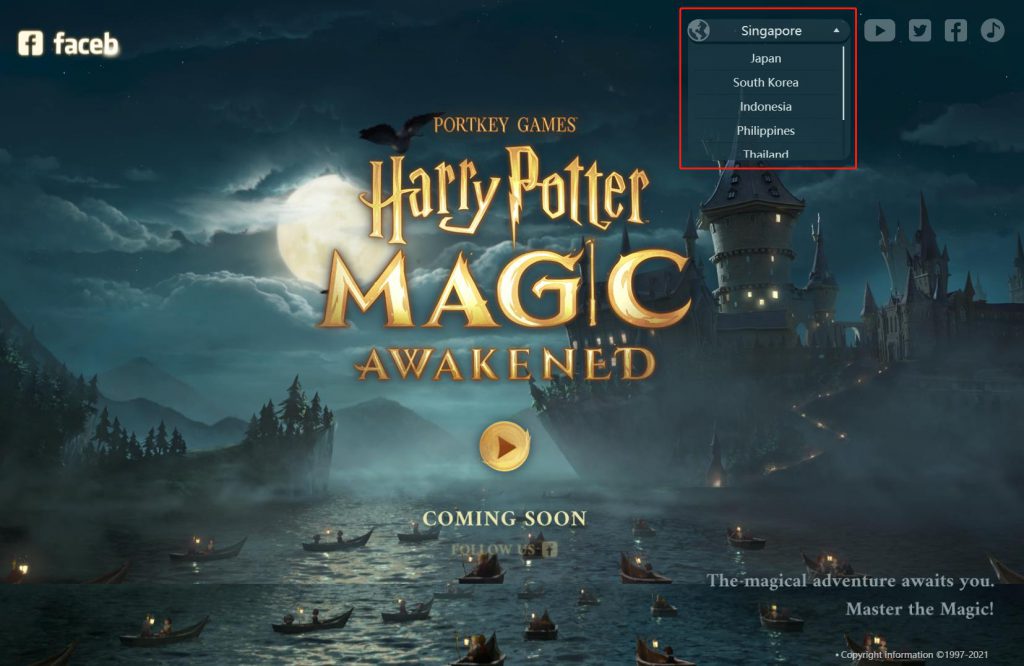 Perhaps it is related to localization work such as language packs, and overseas releases are slightly behind. The game has not yet announced the official release dates for Japan, South Korea, and Southeast Asia, and no appointment has been officially opened. But according to previous news, the game should be available in the entire Asian region around this winter. In addition, judging from the official Twitter response, “Harry Potter: Awakening of Magic” will continue to land in Europe and the United States afterwards. 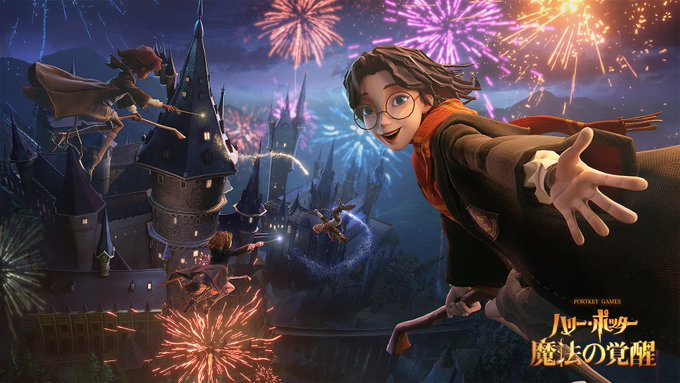 In fact, the recent popularity of the game is not without signs. A number of “Harry Potter” mobile games launched overseas earlier have already verified the huge market potential of this IP.

The former set the time to 7 years before the start of “Harry Potter and the Sorcerer’s Stone”. The revenue reached 7 million U.S. dollars in 4 days of listing, and the turnover exceeded 100 million U.S. dollars a year later; while the AR+LBS game “Ha “Leeport: The Wizarding League” attracted US$12 million in the first month, second only to “Pokemen GO”.

However, the two games have not been launched in China. In other words, “Harry Potter: Magic Awakening” is also the first time domestic players have contacted Harry Potter IP mobile games. 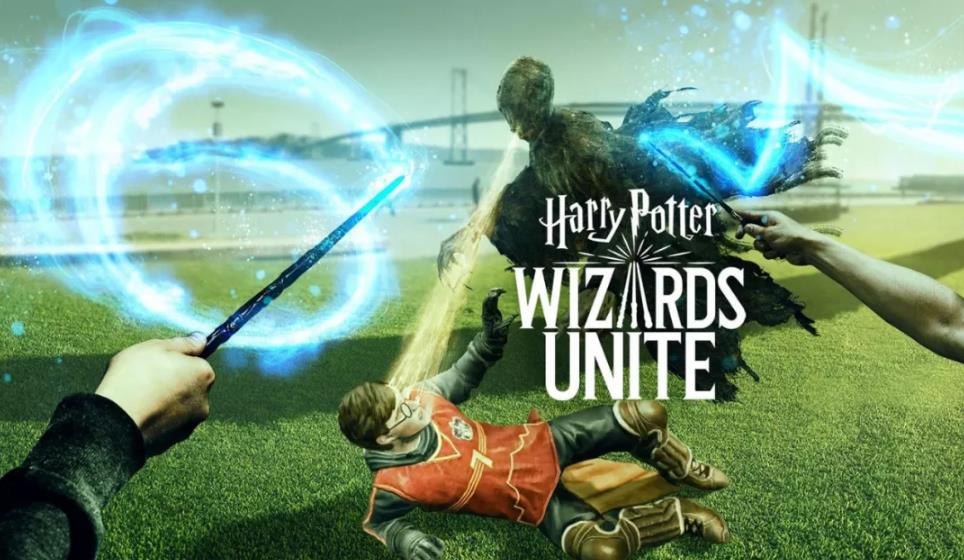 Earlier, in the NetEase Q2 conference call, NetEase CEO Ding Lei also made it clear that he was optimistic about the performance of “Harry Potter: Magic Awakening” in the domestic and overseas markets. “Based on the popularity of IP, I am confident that this high-quality game will succeed in China and overseas markets, and at the same time, it can strengthen the NetEase brand image in the eyes of global players.”

Earlier, in CJ’s media interview, Hu Zhipeng, the vice president of NetEase, explained the relevant content and plans for going overseas and mentioned, “NetEase hopes that nearly 50% of game revenue will come from overseas markets in the future, while only about 10% currently. “

This also means that “Harry Potter: Magic Awakening” may be connected to host platforms such as PS and Switch in the future. At the same time, although the Windows version of the national service did not log on to Steam or Epic Games, the overseas version may also appear on the two major platforms.

Launched on all platforms and will be released overseas soon… The double-labeled “Harry Potter: Magic Awakening” is more like the first counterattack against a Korean company in a popular cross-platform track.

Since the beginning of this year, we have increasingly seen the active presence of Korean manufacturers in the cross-platform field.

From “Gran Saga” at the beginning of the year, “Odin: Rebellion” that broke the myth of the heaven series, “Sword Spirit 2” just launched, and “Paradise W” to be released this year, these next-generation quality cross-platforms Games have been or will be released globally.

Now the launch of “Harry Potter: Awakening of Magic” is tantamount to opening the charge of domestic counterparts in the cross-platform field. In the future global market, compared to South Korea’s cookie-cutter next-generation MMO, stylized and diversified domestic games are obviously more advantageous.

I also look forward to seeing the emergence of more full-platform games in the future, driven by pioneers such as “Original God” and “Harry Potter: Magic Awakening”, and continue to write the glory of the era of mobile games.