GameLook report/In July of this year, a foreign investment bank analyst asked GameLook whether there is a possibility of tax increases in the game industry. The author’s answer at the time was that the possibility was not very high. The reason was nothing more than looking at the entire industry, especially considering the operation of various companies. With regard to the level and product success rate, the actual net profit rate of game companies cannot be considered high.

But I gave him another point of view at the time, that the share ratio that game companies care about may be adjusted.

The reason is nothing more than these points. According to the percentage of Apple’s Google revenue that is 30%, and the domestic Android store’s revenue of 50%, the “platform tax” that game companies bear is much higher than the corporate income tax rate. Governance and anti-monopoly are the top priorities of supervision. The development of small and medium-sized enterprises and the fairness of the network economy have been highly valued by the state. Some past practices of platform companies are bound to arouse the attention of competent authorities, and platform companies do need to make certain adjustments.

What surprised GameLook is that China’s massive anti-monopoly regulatory measures have not yet landed in the “APP economy” field. Overseas countries’ anti-monopoly issues surrounding Apple and Google, as well as Epic’s and Apple’s century-old lawsuit, have progressed in the past month or so. Very quickly, in a way and method that exceeds everyone’s expectations, the 3:7 share of the platform is ending.

The most impactful event was that on September 10th, local time in the United States, Judge Rogers of the California District Court formally ruled on Epic and Apple’s century lawsuit, issued an injunction against Apple and announced the development of the APP in a way that Epic won a terrible victory. Users can directly contact users to provide three-way payment, and this prohibition includes gaming applications. If Apple does not appeal, the prohibition will take effect in December 2021.

Epic alone has subverted the business model of the entire App economy. This is a day worth remembering for developers, and Epic’s efforts are worthy of the game industry’s gratitude. 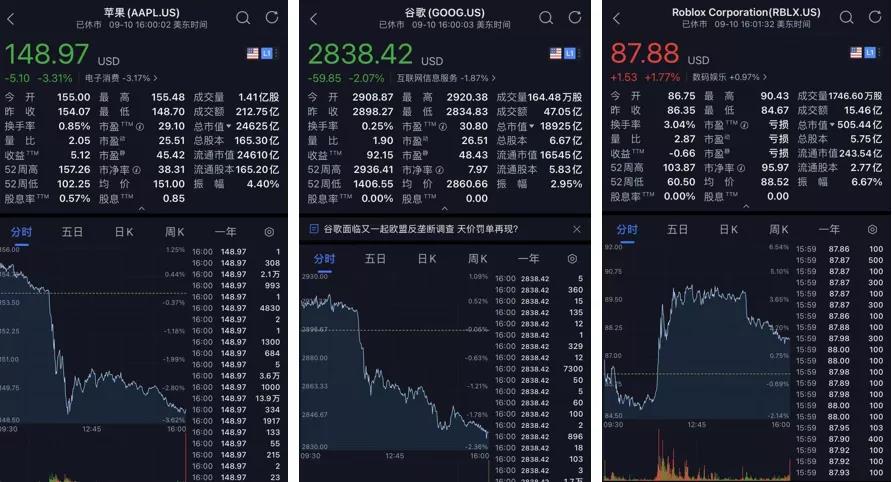 After the court’s injunction was announced, it quickly triggered a reaction from the capital market. Apple’s stock price fell sharply by more than 3% that day, and finally closed down 3.31% throughout the day. At the same time, Google fell by 2%. Contrary to the trend of Apple and Google, Roblox’s stock price rose. While the share prices of US listed companies familiar to US investors, such as Activision Blizzard, EA, Zynga and other game companies, have seen a general rise, and companies with more mobile games have a higher rise. Obviously investors have believed that Apple and Google may finally make concessions to allow APP developers to use three-way payment, which will significantly increase revenue for game companies.

If Apple’s ban really takes effect, this effect will gradually spread to the Chinese market, and it may introduce corresponding regulatory policies before China to benefit domestic developers.

Apple and Google, which were besieged by various countries, defeated Epic tragically

The American technology giants represented by Apple and Google, in the global Internet era, can be said to have become the last big winners in the world outside of China, and around this factual monopoly problem, as well as fighting for tax sources, to protect the competitiveness of domestic enterprises , Data assets, privacy protection, etc., regulatory agencies in various countries can be described as using their brains to protect their own interests.

At the end of August, South Korea passed the “Telecommunications Law Amendment” to force Apple and Google to open three-way payment. Although it is still one step away from President Moon Jae-in’s signature link to take effect, considering the new policy of Google’s mandatory access in October, South Koreans have no reason to delay time. This is the first legislation in a developed country system, which may have a domino effect and completely end the high platform tax.

Apple and Google also understand this regulatory pressure, such as reducing the commission for small developers to 15%, Apple voluntarily reconciling the lawsuit with American developers, and the recent settlement of Apple and the Japan Fair Trade Commission, allowing reading apps to use tripartite Payment and so on are all concessions from Apple.

It’s just GameLook’s view that Apple’s series of measures obviously buried a strategy, that is, Apple chose to give up the benefits of non-gaming apps and preserve the 3:7 rake for game apps. After all, games account for 63% of Apple’s AppStore revenue.

What’s really interesting is that Apple’s series of concessions did not affect the American judge Rogers who made the ruling yesterday. She did not listen to Apple’s “game exceptionalism”, but met Epic’s demands and included the game APP in the game. Within the scope of the ban, this is what really caused Apple’s stock price to plummet by 3% and the market value to evaporate by tens of billions of dollars.

It’s just that for Epic, the verdict was not a complete victory. After all, Apple won 9 of the 10 charges, and the judge even ruled that Epic’s compensation and Apple’s litigation period, “Fortnite” iOS game revenue 30 % To Apple, which is why the boss of Epic is dissatisfied and why he chose to appeal.

After the judgment was announced, Apple was quite proud that the judge determined that Apple did not have a monopoly: “Success is not a monopoly.” As a case law country, the judgment of the American judge is of great significance to Apple. This is actually helping Apple. Avoid all kinds of anti-monopoly lawsuits.

Will Apple appeal? No news has been heard yet, but Apple is contacting a judge to learn about the details of the AppStore policy compliance modification. Whether it will satisfy global developers, I don’t know.