The latest data from the Sensor Tower store intelligence platform shows that in August 2021, China’s mobile game products in the overseas market revenue and downloads rankings, the detailed list changes are as follows.

Revenue list of mobile games going to sea in August

After Xiaogong and other characters went online on the overseas version on August 10, Miha’s “Original God” revenue once again ushered in a peak. In August, the game’s mobile terminal overseas revenue exceeded 110 million U.S. dollars, and it continued to win the title of overseas mobile game revenue. However, with the amazing ability of the 2.1 version to attract money, the game’s revenue in September has now exceeded August.

With the launch of several new suits such as Poseidon X-Suit, Tencent’s “PUBG Mobile” August overseas revenue again exceeded 100 million US dollars, which is the fourth month in terms of revenue since its listing in 2018. The US market contributed 23.2% of August revenue, while revenue from Turkey and Saudi Arabia accounted for 17% and 6%, respectively. If the revenue of the Middle East and Turkey are combined, the proportion will be as high as 28.7%, becoming the highest overseas revenue regional market for the game, reflecting the increasing ability of local players to pay.

Since its listing in August last year, Sanqi Mutual Entertainment SLG+ has maintained strong growth in monthly revenue to eliminate the mobile game “Doomsday Humor”. On the basis of the 17.5% month-on-month growth achieved in July, the game’s revenue in August increased again by 19%, and the ranking moved up 1 place to 6th place accordingly. Although it was a little late to market in Japan, the sincere localization work has brought great rewards. In August, the proportion of revenue from the Japanese market reached 45.4%, significantly surpassing the US market (30%).

Relying on the results of the Japanese market, Lingxi Interactive Entertainment’s “Three Kingdoms: Strategic Edition” increased its overseas revenue by 47.1% month-on-month in August, advancing to the 10th place. In the fourth month of its launch in the Japanese market, the game ranked 21st on the local mobile game bestseller list, becoming the highest-paid SLG mobile game with the theme of the Three Kingdoms, and its subsequent market performance is worth looking forward to. 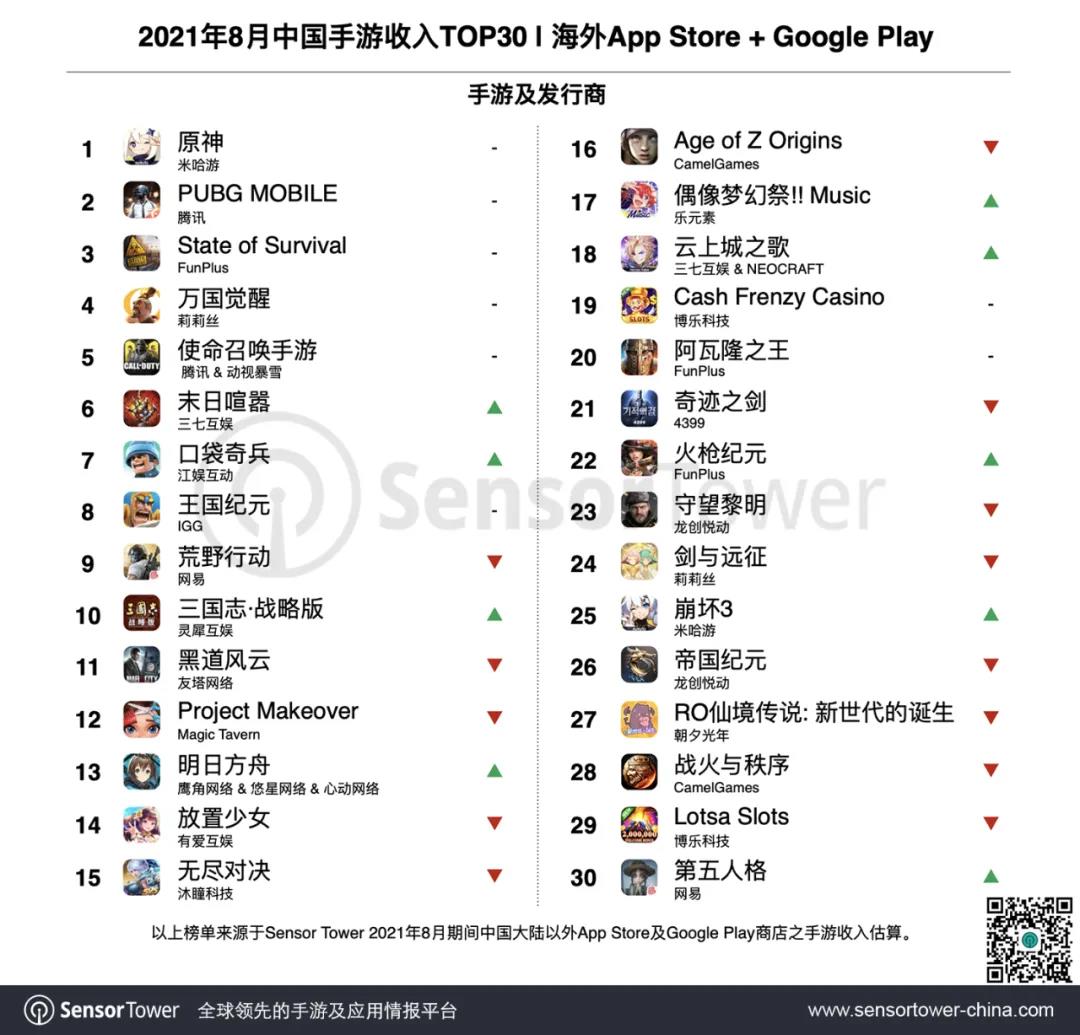 This issue of “Song of Clouds City” revenue increased by 23.2% month-on-month, and the ranking moved up 12 places to 18th. South Korea is the market with the highest revenue for the game and the main source of revenue growth, accounting for 52.5% of August’s overseas revenue. In the localization of the Korean market, Sanqi Interactive has made great efforts, including the groundbreaking inviting well-known local voice actors to dub the game characters, and its results are also very significant. In August, the game successfully ranked No. 6 on the Korean mobile game best-selling list, becoming the most eye-catching new game recently after “Odin: Valhalla Rising”.

In terms of income growth, driven by the overseas 1.5-year anniversary celebrations, “Tomorrow’s Ark” increased its overseas income by more than US$12 million in August, aspiring to the current income growth list.

In August, Zilong game “Heaven and Earth Tribulation” and Sanqi Mutual Entertainment “Douro Continent: Soul Master Showdown” landed in Hong Kong, Macau, Taiwan and Southeast Asia markets one after another. With their achievements in the Chinese market, they ranked 4th and 5th on the list.

The most eye-catching rookie in this issue is Xinghe Interactive Entertainment’s “Little Ant Country”. In August, this mobile game from the perspective of ants increased its advertising efforts. The game revenue increased by 73% from the previous month to 13 million US dollars. SLG upstarts going to sea. The top three revenue markets are the United States, South Korea, and Japan, accounting for 25.4%, 21%, and 14.6%, respectively. 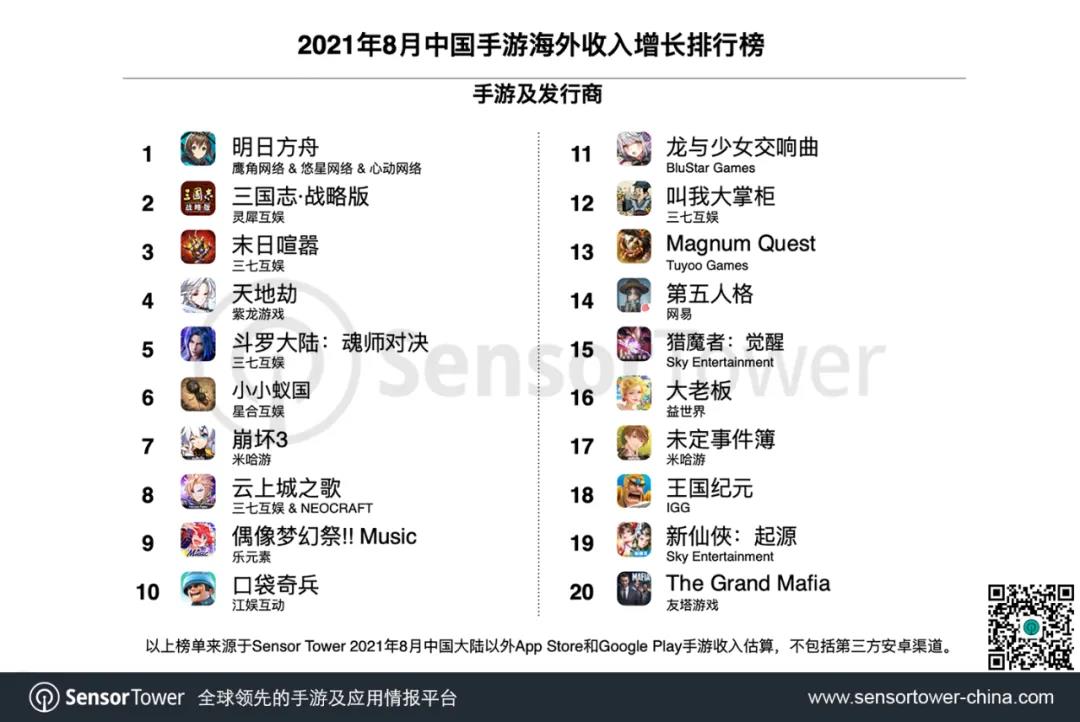 “PUBG Mobile”, which has returned to the Indian market, still enjoys a traffic dividend. In August, it was downloaded more than 16.5 million times overseas, and it continued to top the list.

The two games that are new to the list of this issue are based on insects. In addition to the aforementioned Xinghe Interactive Entertainment “Little Ant Country”, and Infinite light years “Insect Evolution”, the two games ranked 11th and 26th on the list. 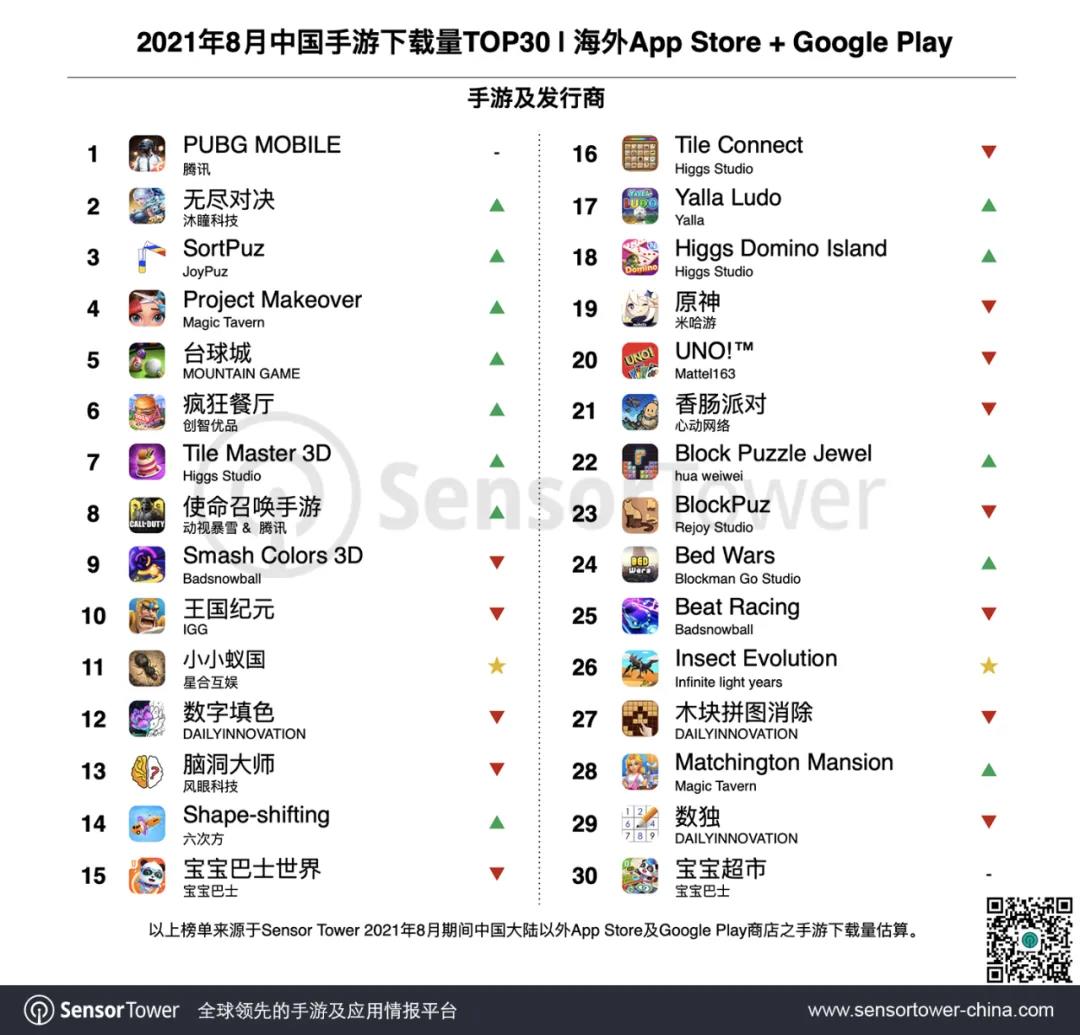 Battlefield 2042 also shifts (but only slightly)