GameLook reported/reviewed the Mid-Autumn Festival that just ended. It was not only a long-lost trip, but also another best time to take pictures. Even an otaku like me can feel the golden breeze and the fall of phoenix leaves from the various circles of friends.

From Plog to Vlog, more and more people are accustomed to using cameras to record their travels and lives. Sometimes it’s for memories, sometimes it’s for sharing happiness, but have you ever thought about it, maybe taking pictures is a fun thing worth cherishing. Recently, such a game that requires a camera in hand to explore the world, enjoy travel and adventure has appeared in front of players.

On September 17, the healing wind adventure game “TOEM Photo Adventure” (hereinafter referred to as “TOEM”) developed and released by the Swedish independent game studio Something We Made was launched on PS5, NS, and Steam and Epic Games platforms. To put it simply, the game is a black-and-white hand-painted world, and the player will act as a traveling amateur photographer, solving various problems by taking photos and recording the scenery along the way.

It is worth mentioning that the game supports simplified Chinese as soon as the game is launched. The price of Steam is 10% off 63 yuan in the country and US$17.99 in the US. At present, the Steam praise rate is as high as 99%, and it is still the second most popular in Steam DB. It happened to be such a “simple” game with graphics and gameplay, but it has won special praise from Steam and has been hailed by players as a “real healing system”. So, what kind of game is the acclaimed “TOEM”?

In my opinion, the story of “TOEM” is not too complicated.

Simply put, with the encouragement of the protagonist’s grandmother, in order to witness and record the mysterious phenomenon named “TOEM”, the player embarks on a journey to the top of Kiiruberg Peak. On the way, with the help of the old-fashioned dynamic zoom camera given by grandma, the player will continue to explore the world and help others in order to get a free ticket to the next area, and finally advance to the top of the mountain.

But as the old saying goes: the important thing about the journey is not the destination, but the scenery along the way. And this classic quote clearly resonated with the R&D team.

Compared with the story, the picture style of this work is quite unique. Under the black and white hand-drawn cartoon style, the game combines 2D characters with 3D scenes, the latter can move freely, simple and expressive. Because of this, the game is able to depict the beautiful scenery along the way: similar to snow-covered peaks, green trees and flowers, windmill cabins, water monsters and so on.

Although it is only black and white, it is not difficult to see the typical Nordic style, which is closely related to the game studio located in Sweden in Scandinavia. After all, the creation comes from life, and the official website of the game directly describes it as a “Scandinavian-style landscape.”

Not only that, the game also adds a lot of dynamic details to enhance the player’s sense of substitution. For example, mosquitoes will surround the rotten apple, the protagonist will leave footprints when walking, he will breathe in the snowy mountains, and there will be fallen leaves flying over the forest, corresponding to the scene. Next, the effects of rain, snow, etc. appear.

This high degree of immersion is even further reflected in the importance attached to the music link by the R&D team. According to the game’s official website, the team consists of five people, one of whom is responsible for audio design, and two of LAUNCHABLE SOCKS and Jamal Green are responsible for composing.

Judging from the final performance, the childlike and lovely pictures are matched with relaxing and pleasant music. Even each interactive design has added different feedback sounds. Players can easily integrate into this slow-paced puzzle-solving adventure experience.

Unlike the impression of the healing game, “TOEM” itself does not have too many complicated gameplay. To put it bluntly, the game itself is not long, the normal process is about 3 hours, but it is a rare puzzle game with “photographing” as the core.

Players get to know all kinds of grotesque and interesting characters during the journey and complete their various requests to obtain a “seal.” Each level is divided into several scenarios. After completing a certain number of requested tasks, players can use the seal to redeem tickets to the next level, and eventually they will come to the top of the mountain where “TOEM” is located.

Under normal circumstances, the protagonist can use the camera to take pictures and save all kinds of interesting things and scenery observed. Most of the requests of NPCs need to be taken with a camera, such as taking beautiful photos of hotels, looking for lost socks, or gazing at people from a specific angle with the camera.

Of course, taking pictures is not difficult. The real challenge is to figure out the task. Not all requests are as simple as “the answer is on the face of the mystery”, but more consideration is needed.

For example, the task of searching for the “little soldier army” is prompted as “there are soldiers nearby, they are still small”, but the real object to be photographed is ants; in addition, it is not easy to understand the need to photograph some specific objects and people, such as For unspecified items such as cube thistle and cotton puffs, players need to carefully observe the surrounding area and keep a record in time. 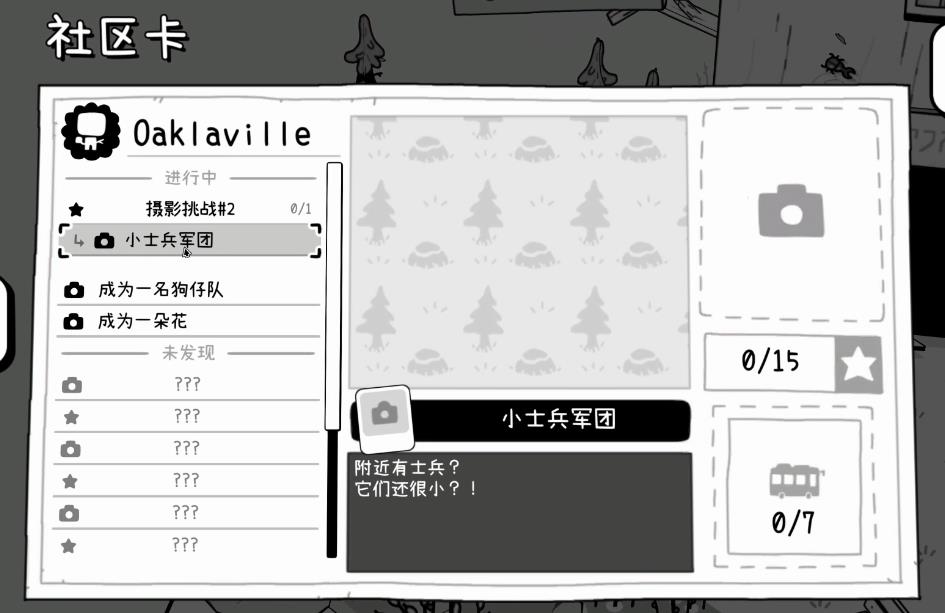 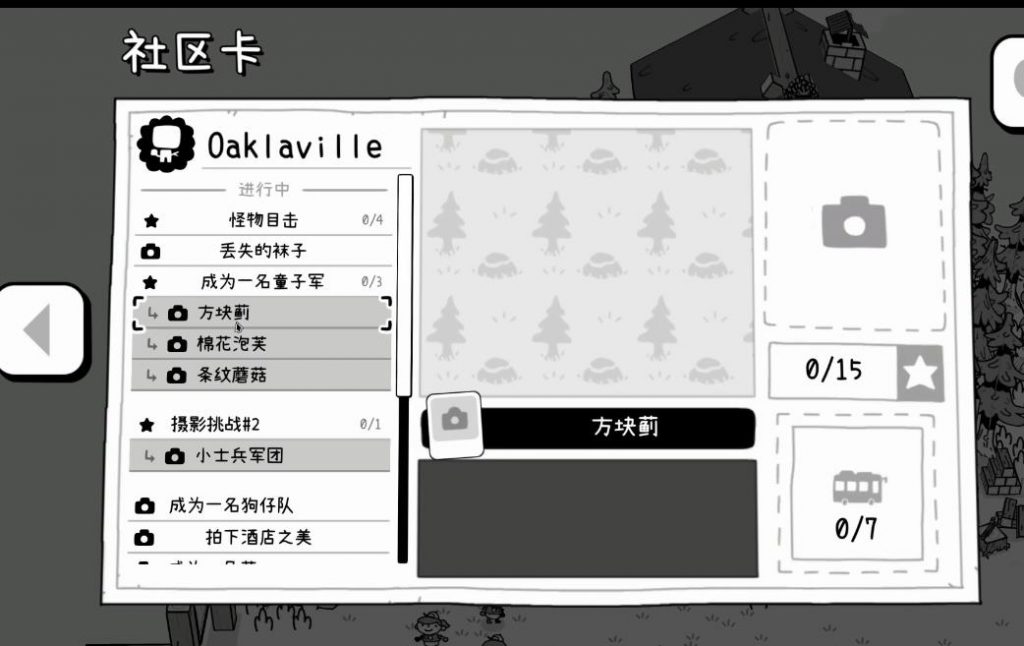 However, compared with the complicated side missions, what really moved the player is that after the mysterious phenomenon named “TOEM” was finally recorded on the top of Kiiruberg Peak, the first thing the protagonist did was to get on the bus home and hand over the photos. grandmother. And grandma said to him, is your adventure happy? In any case, you think that a happy journey is the most important thing. This adventure is really amazing for you.

Then she hung up a photo of “TOEM” and turned to look at the protagonist “I am proud of you”-and this is the only color in the black and white world. 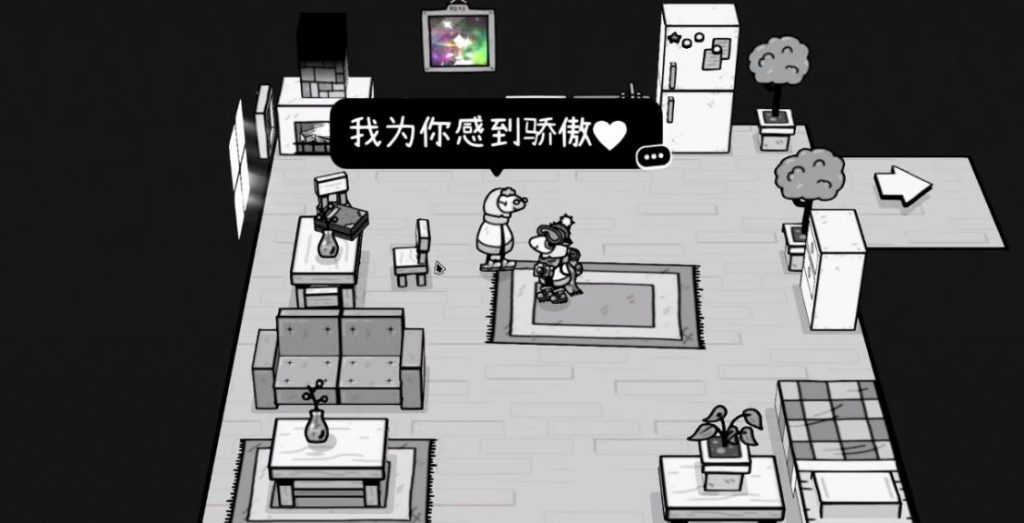 Really healed! I give full marks!

“This camera story makes me reminisce about my childhood. After all, innocent stories always remind people of innocence.” “Thank you the producer, I took this as my birthday present very subjectively. Don’t forget to go home after the trip. You who are adventurous are already amazing. These words are really important to me. “Although it was a simple journey, the story of “TOEM” obviously moved many players. 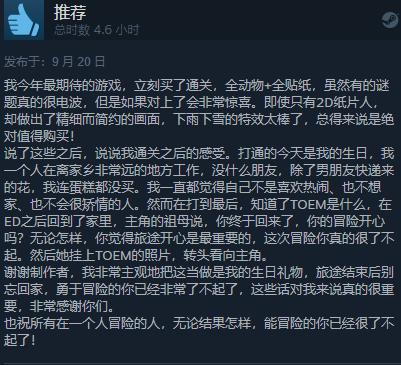 This group of players summed up the game as “casual, cute and warm”; they even scored full marks, calling it “the child was sent out of the house by his grandmother, and started an adventure alone, met many people, seen countless scenery, and ended the adventure.” When I got home, I threw myself into my grandmother’s arms-this is the real healing system.”

At the same time, “TOEM” has a rare combination of camera and decryption gameplay, which has also been recognized by many players. Similar to “It is so fun to find things and take photos, everyone will know if you play it.” “There are no complicated operations or obscure plots. You only need to use the camera to help people in the town solve problems, as well as enjoy music and scenery. Well, this year’s favorite game” and other comments abound.

Even on social platforms such as Weibo, there have been a lot of sharing voices, and most of them tend to be positive: “I declare that “TOEM” is my number one game of the year. It is cute and warm, and even the cold heart will melt away.”

“High-end ingredients often only require the simplest way of cooking.” This is the most well-known line in the documentary “China on the Bite of the Tongue”, which was popular a few years ago.

In the same way, a real healing game does not always require a gorgeous appearance or complicated gameplay. Relying on the simple and beautiful melody and the gameplay of taking photos and solving puzzles, it is enough to impress the players, and sometimes the third color is not even needed.