Since its establishment in 2013, Tencent App has been accompanying users for 8 years, and has gradually grown from an application distribution tool to a one-stop distribution platform focusing on content, community and tools. Through this “8th Anniversary Birthday Party” event, Tencent App will further increase its investment in welfare and content, and continue to provide users with the comprehensive value of “tools + community + content”.

From September 25th to September 29th, Tencent App officially opened the “8th Anniversary Birthday Party” event. During the event, the user opens the application treasure to search for the “happy birthday” keyword to enter the event page, complete the corresponding task according to the steps, and then participate in the lottery and win surprise prizes. The winning rate is 100%. 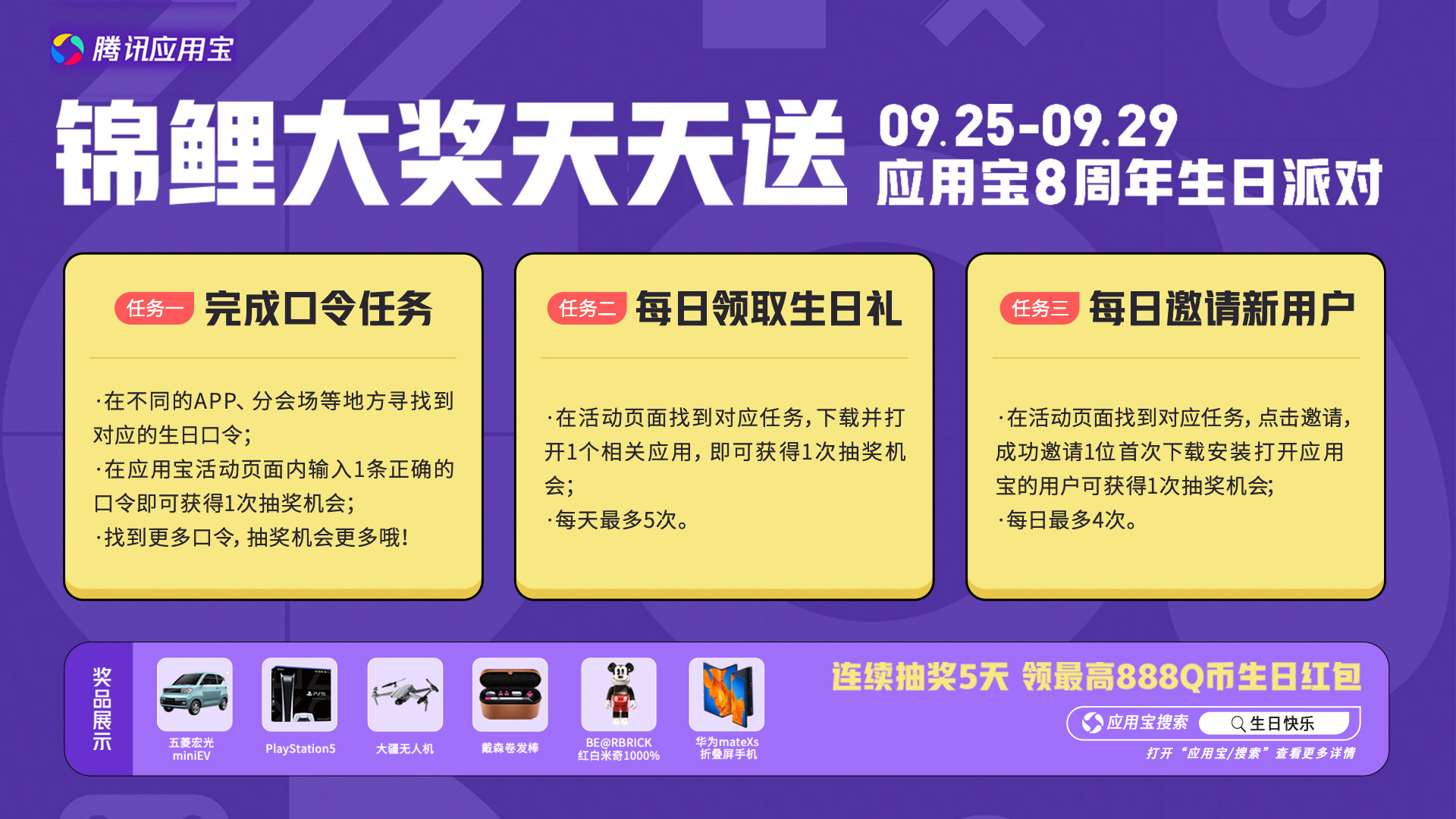 There are three tasks in this welfare lottery, including “password task”, “daily birthday gift”, “invite new users daily”, and users will get a chance to draw a lottery after completing each task. The more tasks a user completes, the more chances they will get in the lottery. During the event, users who participated in the lottery for 5 consecutive days will also have the opportunity to receive a surprise red envelope of up to 888Q coins.

It is understood that this “8th Anniversary Birthday Party” event provides users with a wealth of awards, including Wuling Hongguang MINI EV, Huawei mate Xs folding screen mobile phone, Sony Play Station 5, Dyson Airwrap curling iron, and DJI drone Royal Mavic Air2 and so on. It is worth mentioning that Li Ning, Lenovo Smart Services, Michelle Ice City and other national trend brands will also work with Tencent App Bao to bring a variety of gifts to users. 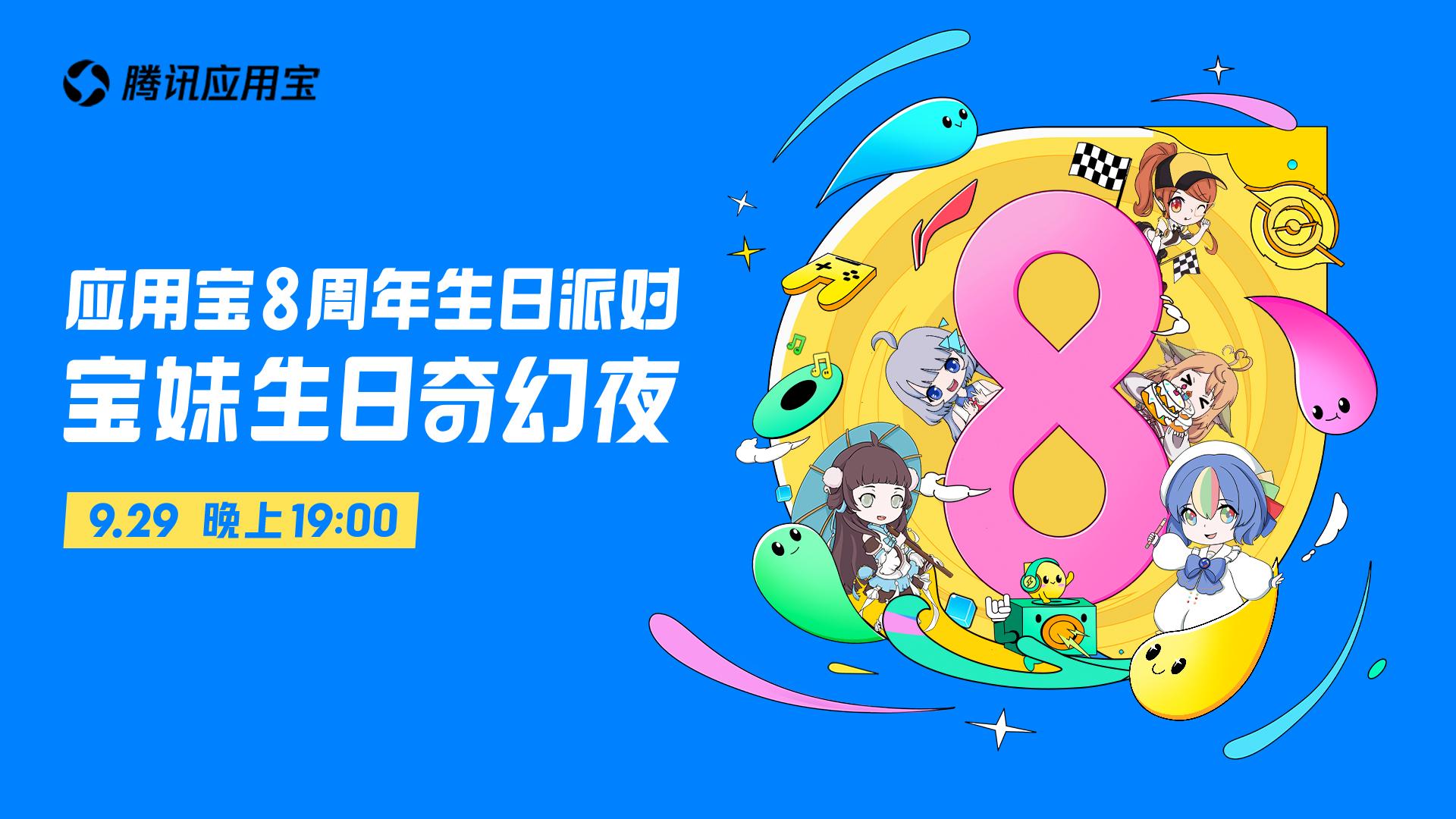 It is worth mentioning that Baomei will also release a limited passcode at the Fantasy Night scene, and users can receive exclusive super benefits for “Baomei Birthday Fantasy Night”, including the Nintendo Switch National Bank red and blue console suit, and the King’s Q version of Yu Ji Jialuo Figure, Zhiyu Ji Tiandao co-branded Hanfu, etc.

Established in 2013, Tencent App Store initially played the role of an app store in the industry, providing users with functions including app distribution and app security guarding. In the course of the development of the mobile Internet, it has become the leading Android app store in China. .

In recent years, as the influence of digital content on user decision-making has become increasingly obvious, Tencent App has gradually begun to use content to drive application distribution. At present, content and benefits have become the core distribution method of Tencent App.

In April of this year, Tencent’s PCG platform and content business group adjusted the organizational structure, integrating businesses including Tencent Video, Tencent Weishi, and Tencent App, to form an online video BU (On-line Video Business Unit, referred to as OVB). After this business integration, Tencent App will not only continue to do a good job in the distribution of all-category apps, but also strengthen the ecological construction of game content to help the sound development of the entire industry’s game industry.

It’s worth noting that, as an important part of the 8th anniversary birthday party event, Tencent App will also release the 8th anniversary theme song “Treasure Party” during the event, through the fashionable dynamic style and the fresh and sweet interpretation of Baomei, The combination of innovative rhythm and sound effects allows users to have a deeper content awareness of Tencent App. 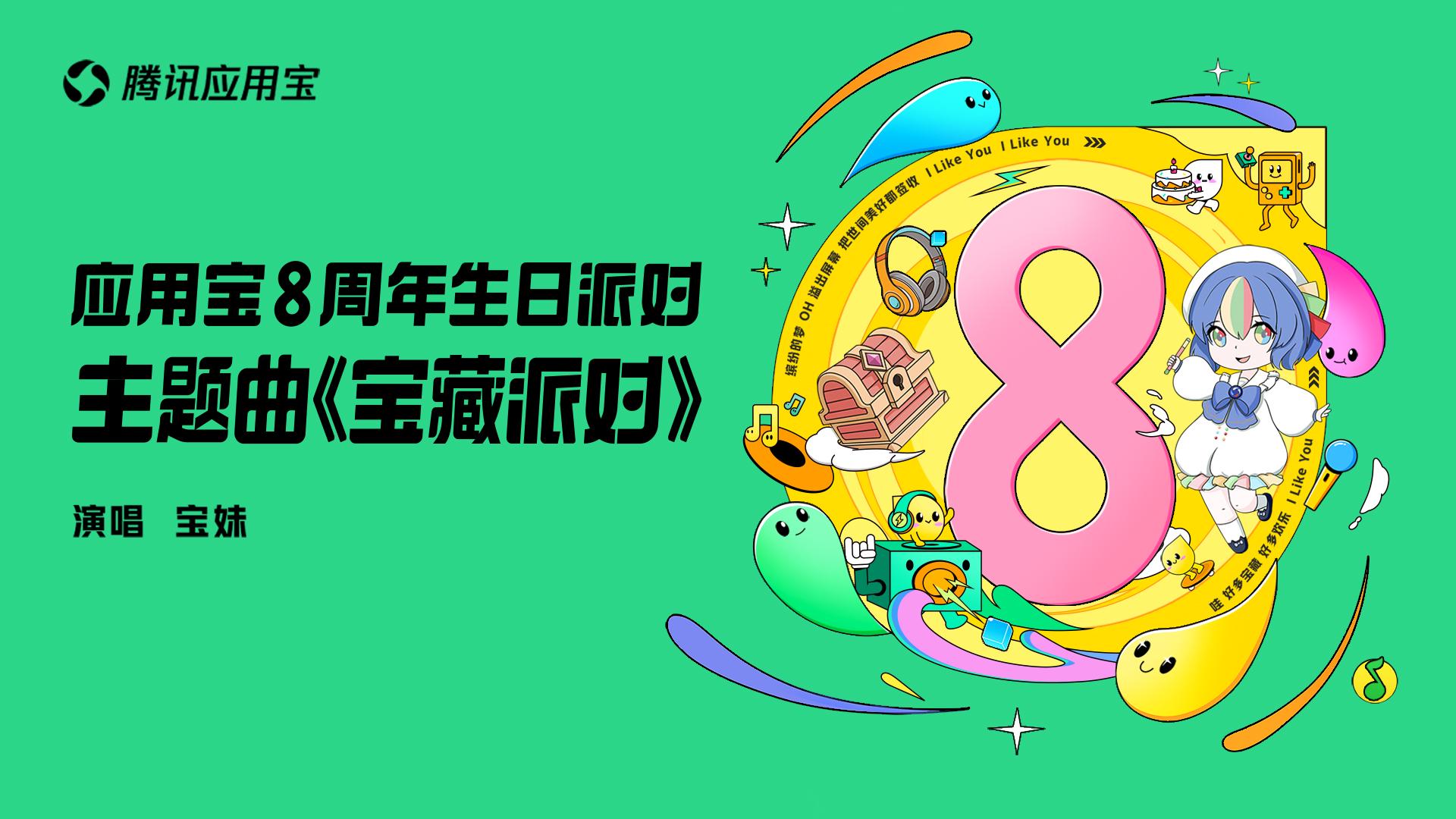 It is reported that “Treasure Party” is tailor-made by Tencent Yinbao and Tencent Music Entertainment Group Producer Studio, and the producer of the “2022 Beijing Winter Olympics Theme Song” is specially invited to perform it in person. On September 26, “Treasure Party” will be launched on QQ Music, Kugou Music, Kuwo Music and other platforms, and users will be able to listen on these platforms by then.

This “Yingbao 8th Anniversary Birthday Party” is not only a deepening of Tencent’s two main directions of welfare and content, but also a prelude to its brand new upgrade. As Tencent App Store continues to strengthen its investment in these two areas, users are expected to get more benefits and exciting content through Tencent App Store in the future.