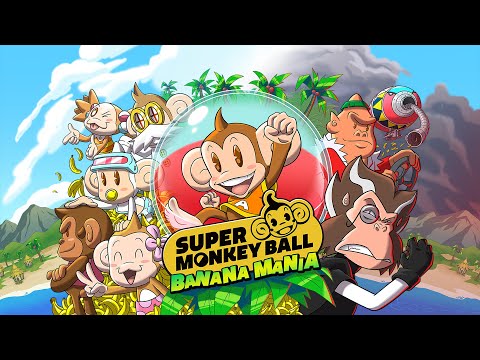 Sega presents the launch trailer Super Monkey Ball Banana Mania. This will get you in the mood for jumping fun with brightly colored graphics.

With over 300 lovingly recreated levels and mazes, 12 fun minigames and a cute group of characters Super Monkey Ball Banana Mania the ultimate SMB experience for longtime fans and newcomers alike. Beautiful new graphics, a captivating comic book style story, new support features, 4player local coop mode in the minigames, online challenges and leaderboards, over 100 customizable items and five new bonus modes are the highlights of this expanded remasters that bring the magic of the originals revive.

In addition to the classic characters, in Super Monkey Ball Banana Mania also represented new heroes from legendary SEGA games and pop culture. Turn Jetset radio, Kiryu out Yakuza as well as the dynamic duo of Sonic the Hedgehog and Miles “Tails” Prower are available as characters that can be unlocked for free from the getgo. The likeable pop culture icon Hello Kitty, Morgana from Persona 5, Suezo out Monster rancher and the SEGA Legend consoles (Game Gear, Saturn and Dreamcast) will also join the gang as new DLC characters.

In addition to the standard version, a special limited edition 20th Anniversary Edition is available today for the same price. The Anniversary Edition includes a 40page art book featuring images from every game in the series, straight from the Sega archives. It also includes a collectible case, a reversible cover and 10 exclusive cosmetic items.

Super Monkey Ball Banana Mania is available since yesterday for all current systems.

N64 Switch controllers in stock: how to order if you are a Nintendo Switch Online member