Nintendo is gearing up for the release of the new Switch OLED console. The latest version of the popular hybrid console will hit shelves this Friday, priced at £309.99. As the name suggests, the Switch OLED’s big draw is a newly upgraded display.

Unlike the regular Switch’s 6.2-inch LED screen, the Switch OLED will have a 7-inch OLED screen. The Switch OLED is the first handheld to feature an OLED screen since the PS Vita, meaning it offers gamers much sharper visuals with colors that jump off the screen when playing in handheld mode.

The Switch OLED also features upgraded speakers, a new dock, a larger kickstand, and a snazzy new white color scheme. Pre-release reviews have also revealed that the Switch OLED seems to benefit from a sturdier build quality and a more premium feel overall.

If you mainly game on the go, the Switch OLED seems like the best way to play Switch games. And if you’re thinking of picking up Nintendo’s snazzy new console, there are a number of deals you can turn to.

The Nintendo Switch OLED model can be pre-ordered directly from Nintendo. Priced at £309.99, the big draw of the new Switch is a beautiful seven-inch OLED display – and if you mainly game on the go, this will be a big plus for you.

The Switch OLED also comes with a new dock and is available in a striking new white color scheme. Pre-orders for the Switch OLED are on console before the October 8 release date.

Amazon UK is now taking pre-orders for the Switch OLED and has a number of bundles available. One includes the Switch OLED console and a snazzy carrying case to keep your new console safe while you’re on the go.

If you’re looking for something to play on your shiny new Switch OLED, why not pick up Metroid Dread? Amazon UK has a Switch OLED bundle featuring the eye-catching new adventure starring iconic bounty hunter Samus Aran.

GAME has a range of Switch OLED bundles available for £349.99. These bundles include a Switch OLED console and one game – either Animal Crossing: New Horizons, Metroid Dread, Mario Kart 8 or Super Mario 3D World + Bowser’s Fury.

The Switch OLED also comes in the neon color scheme seen on the original console. In addition to the new screen and dock, the Switch OLED offers better internal storage, a wide adjustable stand for table mode, and improved portable audio.

The Switch console can be purchased separately for £309.99 from retailers such as Amazon, Argos and the My Nintendo Store.

Or you can choose from a range of bundles available ahead of the console’s Switch OLED release this Friday (October 8).

Amazon UK has a Switch OLED bundle with the console and a copy of Metroid Dread for £359.98.

While GAME has a range of Switch OLED bundles available for £349.99.

If you’re planning to order some extra Switch games from GAME, there’s a little trick you can use to save some extra cash.

TopCashback is a website that receives commission for redirecting the user to thousands of UK retail websites.

And TopCashback then passes on “100 percent” of this commission to its users. 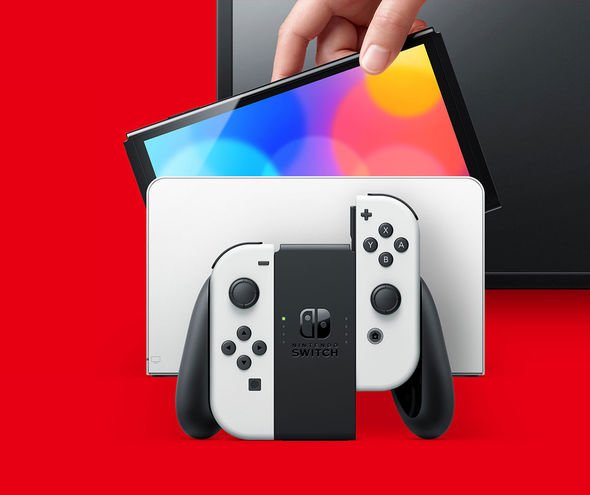 Nintendo Switch OLED pre-orders are available ahead of the console’s release date this Friday (Image: NINTENDO)

Cashback earned through the site can be debited from a user’s account via a BACS wire transfer, a transfer to a PayPal account, or by topping up one of over 20 different gift cards.

And right now, TopCashback has a deal that offers up to 3.7 percent cashback on GAME purchases.

This offer does not apply to Switch OLED consoles, but does apply to physical games.

So if you’re planning to buy new games to play on your Switch OLED console from GAME, you can save big.